One of the most popular games in our house is Cat Lady, so when I learned that designer Josh Wood was finally releasing his second design, I had to take a look. This is another card-drafting game, but this time, players are building a beach front and attracting locals, tourists, and VIPs, represented by meeples that walk around on your cards. But is it any fun? Let’s take a look! 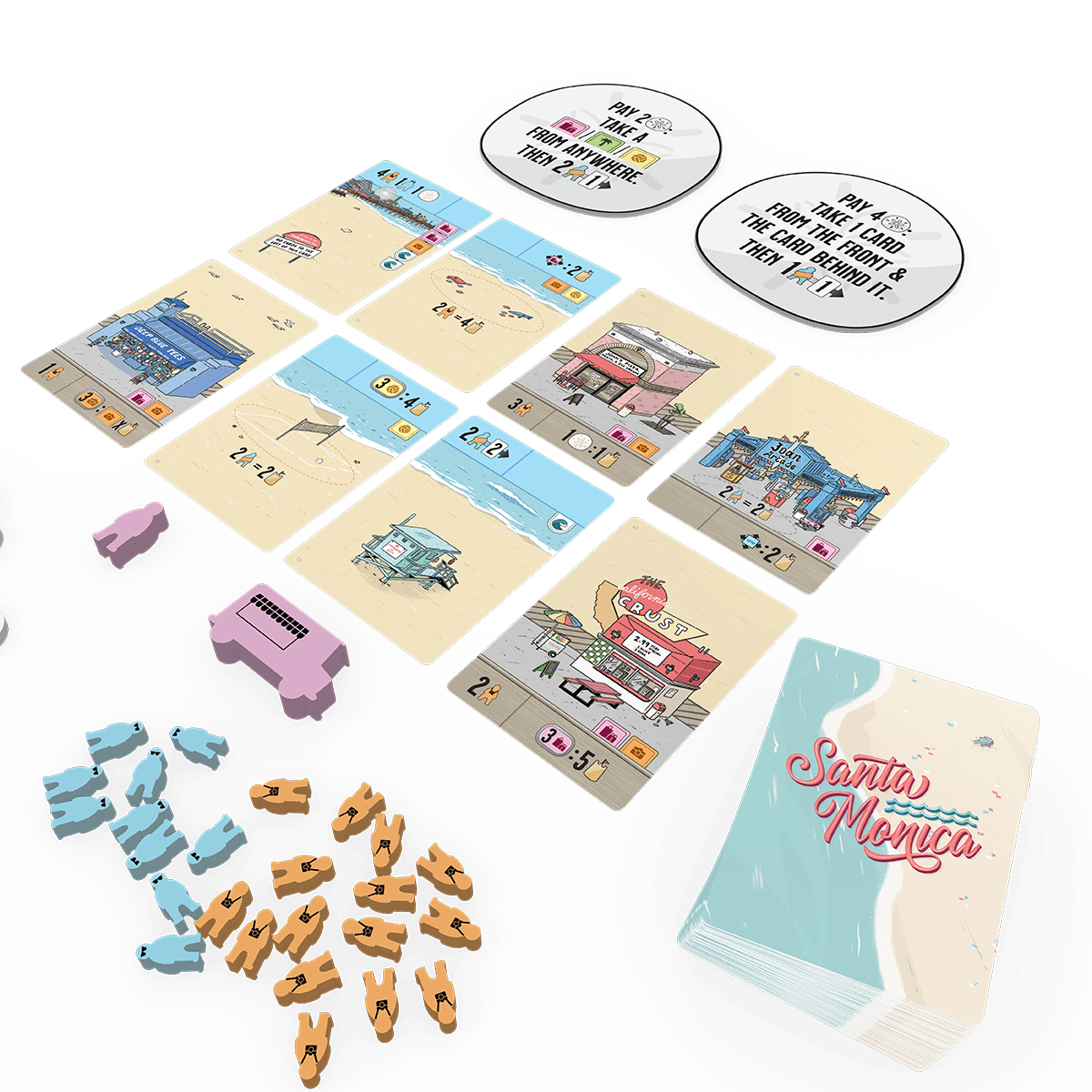 Lately, I’ve been extremely impressed AEG’s art direction, component quality, and prices, and Santa Monica is no different. This is a beautiful game with a unique, fun look and solid components across the board. I also appreciate the unique themes: I hate the beach, but I’d rather play a game about the beach than yet another about space combat or trading in the Mediterranean. You could argue $39.99 MSRP is high, but Asmodee was charging that much for Splendor over five years ago. I think the critique comes from the fact that this box is just way too big, and the components take up one tiny corner of it.

My mind went to Splendor for that comparison because this is is another game where players draft from an open tableau and build their own personal tableau for points. However, rather than focusing on engine building, Santa Monica is primarily focused on a variety ways to score points from your cards, many of which involve getting meeples onto your cards and then moving them around. Of course, there are also some placement rules that make sense with the theme: the beach goes on the top row, you can’t have a piece of your boardwalk out alone by itself, etc. There are enough extra rules that this is probably a “next step” drafting game after introductory games like Sushi Go! or Cat Lady. 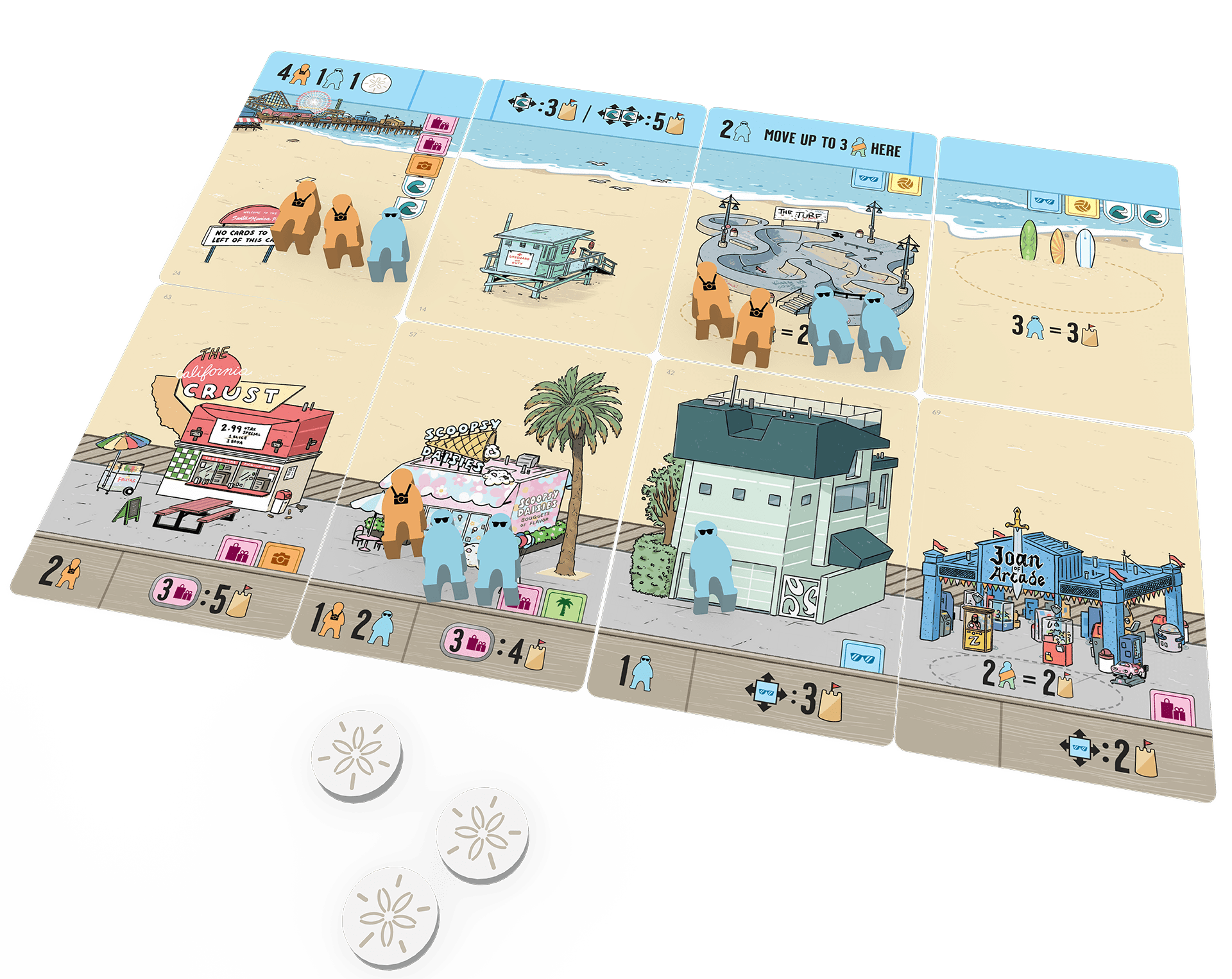 I always have the same question for myself with these kinds of games, where a lot of rules are laid on top of a simple mechanism. Are the rules worth it? Does all the extra chrome make for a more interesting game, or did they make a fast, smooth game unnecessarily clunky? In the case of Santa Monica, the extra rules are both good and bad.

Santa Monica relies heavily on its theme for its rules to make sense, and for the most part it works. Placement rules for cards and the idea of moving people around work thematically. There are two problems, though. The first is that the game has a lot of symbols to learn, and so when you’re first staring at those rows of 8 cards in the middle, it’s really hard to figure out what you want and why you would want it. It only takes a game or two to get used to, but I feel like it could have been cleaner. The other problem is that letting every meeple move at the end of the game is incredibly counterintuitive, and “feels” wrong. The optimal way to play is to move all of your people to almost where they need to be, but it’s far more natural to “get the thing done” during play. I understand the idea of the rule (making sure players aren’t screwed on the last turn), but just letting 1 or 2 meeples move instead of all of them would have felt more natural.

On the more positive side, a lot of the “fun stuff” rules that are added to the game are completely worth their investment. The foodie and the food truck are simple to explain, but add another important layer to deciding which card to take. The sand dollar actions allow for a small feeling of combo-tastic moves, and prevent players from feeling like the game forcing them down certain paths without interesting decisions. There’s also just enough player interaction to feel like you’re playing together without really disrupting the flow of the game and the excitement about building your own space.

Santa Monica has a lot of things going for it, and the things I dislike about it really only apply to your first few games. You’ll quickly get used to the iconography, and the strange endgame movement. After that, you’ll have a fun, beautiful, unique drafting game. I look forward to Josh Wood’s next game!

Thank you to AEG for providing a review copy of Santa Monica.

Santa Monica is great fun, even for beach-haters like myself.