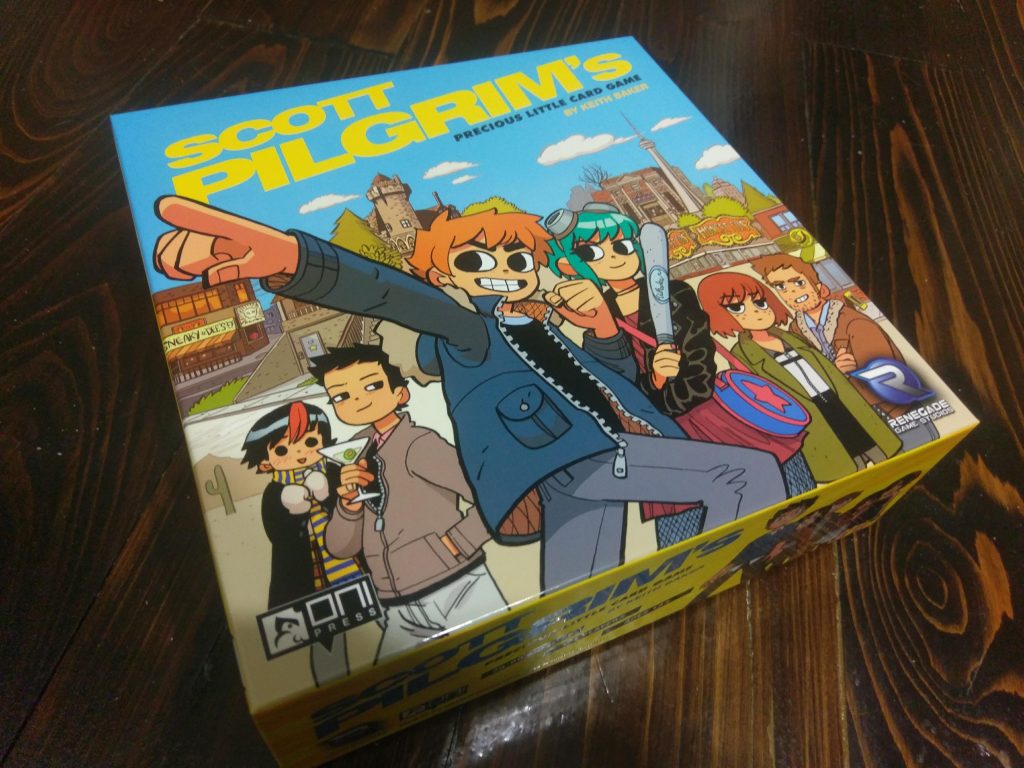 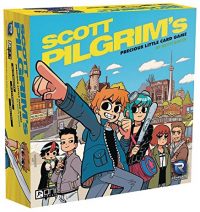 Scott Pilgrim’s Precious Little Card Game is based on the hit comic from Bryan Lee O’Malley. Popularity of the series has grown so much that it was adapted into a movie starring Michael Cera titled Scott Pilgrim vs. The World. A video game in the beat ’em up genre was also developed and published by Ubisoft to accompany the release of the movie. Those adaptations are where I personally first heard of the series—I first watched the movie with my brother and put many hours into the video game when it was released. I was eager to explore the latest adaptation of the series, which just so happens to be a deck-building card game. 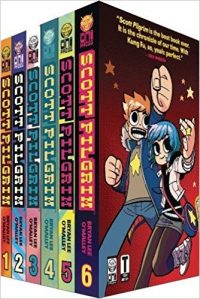 The Scott Pilgrim books are for a mature audience, which is also true in the card game. While I cannot say I have seen every single side of every card, I can give some examples of the mature content found within the game.

Violence: Multiple cards depict characters punching and kicking each other in a variety of ways. One card even shows a character being electrocuted.

Sexual Themes: The biggest theme of the series, aside from fighting, is romance. A few different cards show characters in bed with each other. One card in particular is called “Temptation” and shows a character in what is intended to be a seductive pose. Another card is called “The Perfect Moment” and references the touching of a character’s breast. One of the cards also depicts two guys kissing.

Drug/Alcohol Use: One of the cards is titled “Tequila” and depicts a bottle of Jose Cuervo. The opposite side of the card shows a character drinking the bottle and is titled “Potion”.

Positive Themes: The art of the book/cards is very unique. Most comics and books with this type of mature content are usually much darker and violent. Scott Pilgrim shares more comparisons with a comic strip than anything.

Scott Pilgrim’s Precious Little Card Game stays true to the series in every way possible. The most prominent evidence is the card art. Bryan Lee O’Malley himself did the art on both sides of each card. The art nicely compliments the effects and title of each card which helps immerse players into the world of Scott Pilgrim even further than the gameplay. Like the series, we see the influence of video game culture throughout the entire experience.

The basic objective of the game is to defeat Ramona’s Evil Exes. Players take control of Scott Pilgrim or one of his allies to do so. Characters have special traits and utilize resource and drama cards in a variety of different ways—they even have a starting set of their own cards, too. These unique traits are effective in having the player adapt to a particular play-style, e.g. characters like Scott and Ramona literally thrive on drama cards, while it benefits other characters to get rid of drama cards entirely. This idea of different character play styles was clearly influenced by the fighting genre, because that influence is seen in the combat phase of the game as well. 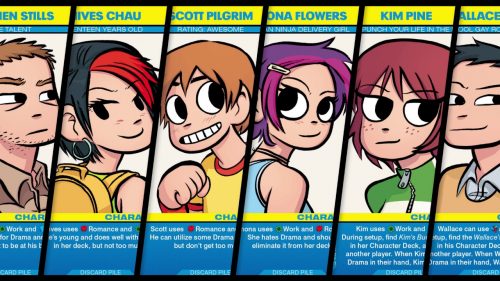 Scott and the gang are all here with their own unique traits and abilities.

The game is played in two phases: acquisition and combat. In the first phase, players will be collecting combat and power-up cards from a plotline by using character-specific resources. These resources (romance, music, work) are represented on each card, and the goal is to get what combat move or power-up you will want for the next phase. This phase is why the game is a deck builder—players need to get all the combat and power-up cards they possibly can in order to do well in the next phase.

The next phase of the game should be the best part. Unfortunately, it is where those I was playing with got lost or confused on how things were meant to play out. This is the phase where Scott Pilgrim’s Precious Little Card Game shows its roots in video game culture. To take on a challenge, or Evil Ex, a player must create a combo or “Button Mash”. Each character has a list of unique combos that players can create using acquired combat cards for a higher damage count. Straight out of a fighting game, these combat cards come in the form of up, down, left, right, B, and A. When a player uses combat cards that do not form a unique combo it is called “Button Mashing,” which is terminology straight out of a fighting game. 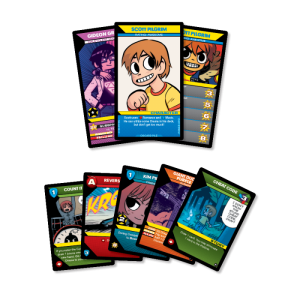 During my play session, things got confusing for other players during the “VS Draw” part battle or challenge. The idea of the phase was to add or subtract damage based on how much drama a character was holding—it makes for a deeper challenge in the combat phase, but can be overwhelming to new or casual players. When I first read the rules and laid out the cards to learn the game days before teaching others, I did find this to be slightly confusing as well, though fundamentally, it’s actually not that complicated.

The other players were fatigued from trying to learn the game by the time we got to that point. The double-sided format of Scott Pilgrim’s Precious Little Card game can actually be very overwhelming at first. There is just so much that you don’t know where to start or which cards to be paying attention to. Of course you need to pay attention to both sides, but may just be too much for casual players like my friends and I. The rulebook itself can also add to the feeling of being overwhelmed, after awhile, I understood the mechanics and flow of gameplay but it wasn’t until I put them into practice during solo play that I really understood. 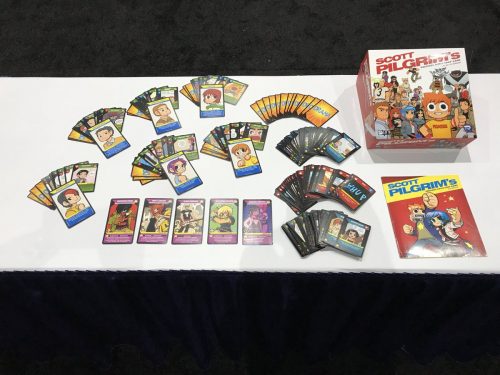 That’s a lot of cards.

As a fan of the series and an avid gamer, I really appreciate Scott Pilgrim’s Precious Little Card Game. The entire theme reflects the world of Scott Pilgrim, not only through the art, but through gameplay as well. When I saw terminology and other influences of gaming culture, I knew this would be right up my alley—it just didn’t click with my friends, unfortunately. This was also a perfect way to get me involved with the world of tabletop gaming, an instance where video game culture and tabletop culture crossover. The same goes for this review: I regularly write for the gaming department, but this collision of two worlds created a unique opportunity for my first tabletop review.

A review copy was provided by Renegade Game Studios

The concept of Scott Pilgrim's Precious Little Card Game takes notes from its source material and takes inspiration from video games in a creative way. It may be tough for new players to learn, but anyone experienced with deck builders will fit right in.