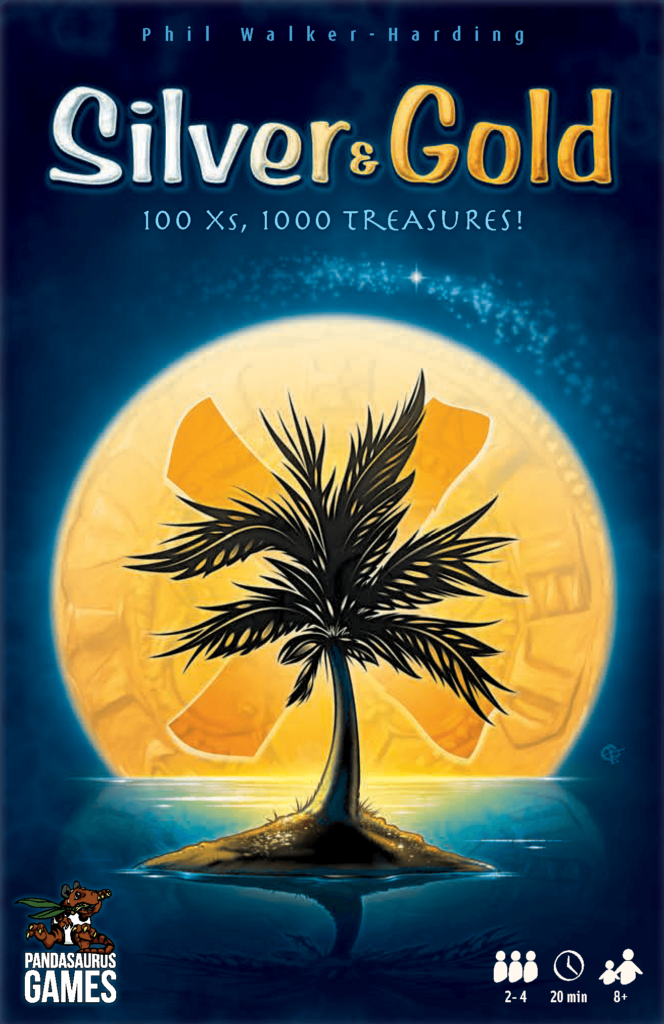 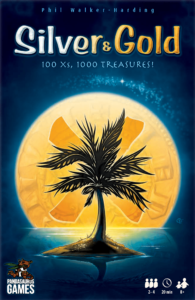 Silver & Gold is a small card game of treasure hunting. In this game, players each have a hand of treasure map cards with a grid of squares on them, and their goal is to earn points by filling out all of the squares with dry erase markers. It is yet another excellent family game from Phil Walker-Harding, the designer of modern greats like Sushi Go, Gizmos, Barenpark, and Imhotep. It is great for kids, adults, gamers, and non-gamers alike.

I have never played a Phil Walker-Harding game I didn’t love. Silver & Gold is a flip-and-write game from him which uses some of his classic design hallmarks.

The goal of this game is to earn the most points, something players accomplish by filling out treasure map cards. Points are awarded both from completing the cards (that is, crossing out all their squares), but also from strategically using the symbols on the cards to accomplish in-game objectives.

At the start of the game, each player receives 4 treasure cards, from which they choose 2 to keep. The rest are shuffled back into the deck, and 4 more treasure cards are splayed out in a central tableau. The 8-card deck of expedition cards is placed nearby.

The game lasts 4 rounds, each of which is comprised of 7 turns. The turn structure is:

In this 3-player example, the expedition card shows a sequence of three squares in a straight line. Each player must cross off this sequence of squares on one of their treasure cards. Notice that the player with the purple card drew the X’s horizontally – the shape on the expedition card may be rotated or mirrored as players wish. In the event that a player can’t or doesn’t want to draw the shape, they may instead cross off a single square anywhere.

When a palm tree is crossed off, the player earns 1 point, plus an additional point for each palm tree shown on the 4 treasure cards face-up in the tableau.

Lastly, when a coin icon is crossed out, the player marks it on their personal scoring card, crossing off the next available coin symbol. 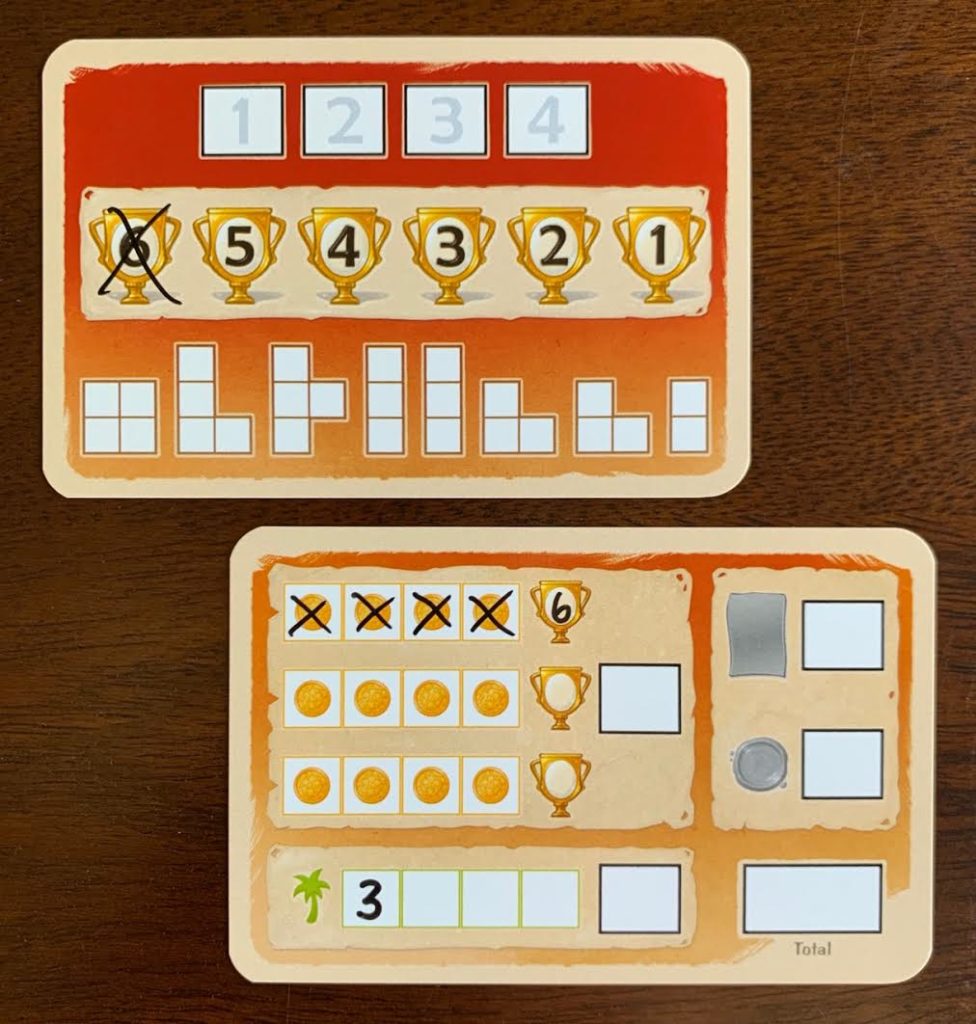 When a player completes a row of coins on their scoring card, they earn the points shown on the leftmost trophy of the round-tracking card. This is illustrated above; in this example, the player was the first one to cross off 4 coins and complete a row. As such, she earns the 6-point trophy, marking this number on her card and crossing out the trophy icon. The next player to complete a row of coins will earn 5 points, then 4 points, and so on.

When a treasure card has been completely filled out, the player sets it aside and draws a new one from the center. At the end of the game, completed treasure maps are worth the number of points listed on them. Some cards offer additional points for every card of a certain color that has been completed.

Each round, players will use 7 of the 8 expedition cards. At the end of the 4th round, the game ends and the player with the most points is the winner!

Once again, Phil Walker-Harding has made a stellar game. Silver & Gold is easy to learn, quick to play, highly replayable, and most of all, fun. It reminds me a bit of Barenpark, with its mechanism of covering certain spaces to activate the icons on them, and earning a steadily-decreasing number of points for completing objectives.

Walker-Harding’s design style seems to be “games that anyone can play, and everyone will enjoy,” and this one fits that mold perfectly. A game of Silver & Gold lasts 15 minutes, and it always leaves players wanting to try it again. It’s also super portable, so it is a great game to play at a restaurant or pub, or to toss into a suitcase when traveling. 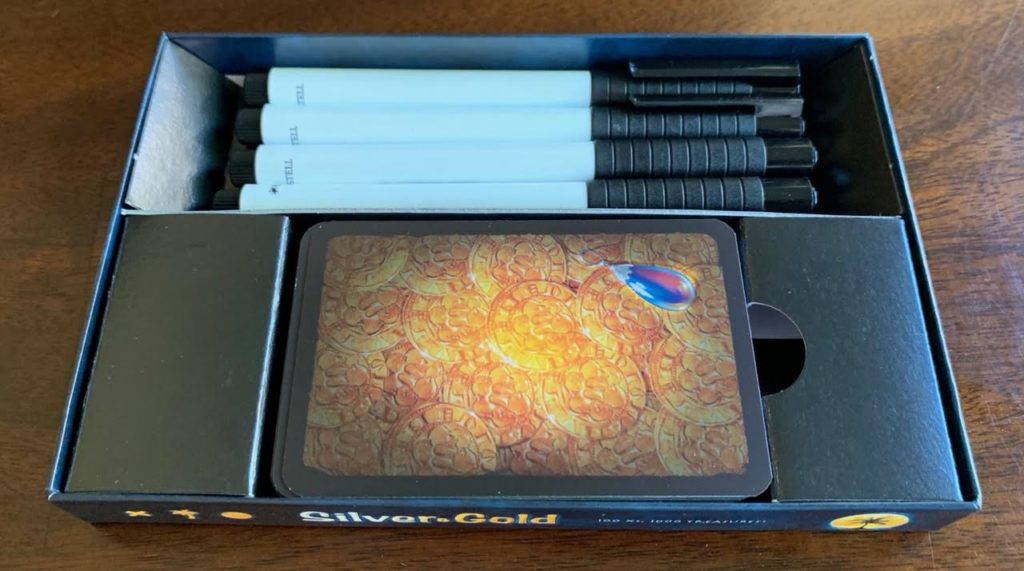 Though there is not much to say about the production quality for a game that is just a deck of cards, I was pleased to see that the dry erase markers work very well, better than just about any other game I’ve played that uses them. The markers in this game are not the cheap-o kind found in most roll-and-writes; they are closer to Expo markers. Initially, I was worried that they might smudge or discolor the cards over time, but this does not seem to be a problem. They erase cleanly and easily.

For the $15-20 price point, Silver & Gold is a no-brainer. This game is fantastic, easily one of the best roll/flip-and-writes out there. I can’t imagine anyone NOT loving it. Highly recommended.