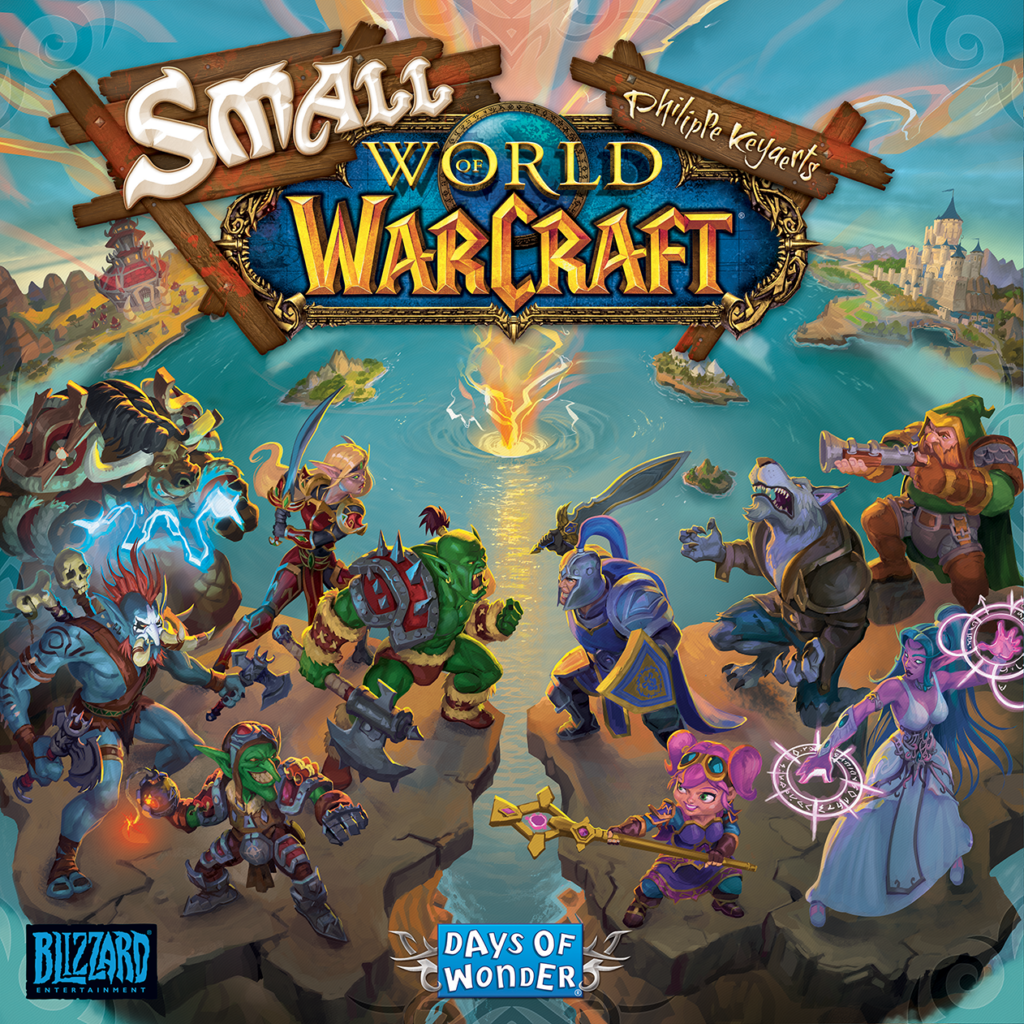 When you mix two well known Intellectual Properties, you run the risk of not having the overlap you were looking for. I don’t think that’s going to be a problem for Small World of Warcraft (SmWoW). Small World is an area-control tabletop game where players fight over land with fantasy races mashed up with random powers, often with odd and satisfying results. World of Warcraft is the granddaddy MMORPG that launched in 2004 and still has millions of players worldwide; in WoW players can travel between the two main continents as well as many other locales. In SmWoW players will get to choose between Horde, Alliance, and Neutral races from the Warcraft mythos mashed up with random powers- and instead of one large board to play on like in the original Small World, players will fight over different continents, reminiscent of the lands of Azeroth from Warcraft. So is this a match made in the Well of Eternity, or is it only as fun as a pickup group failing on the first boss of Molten Core? 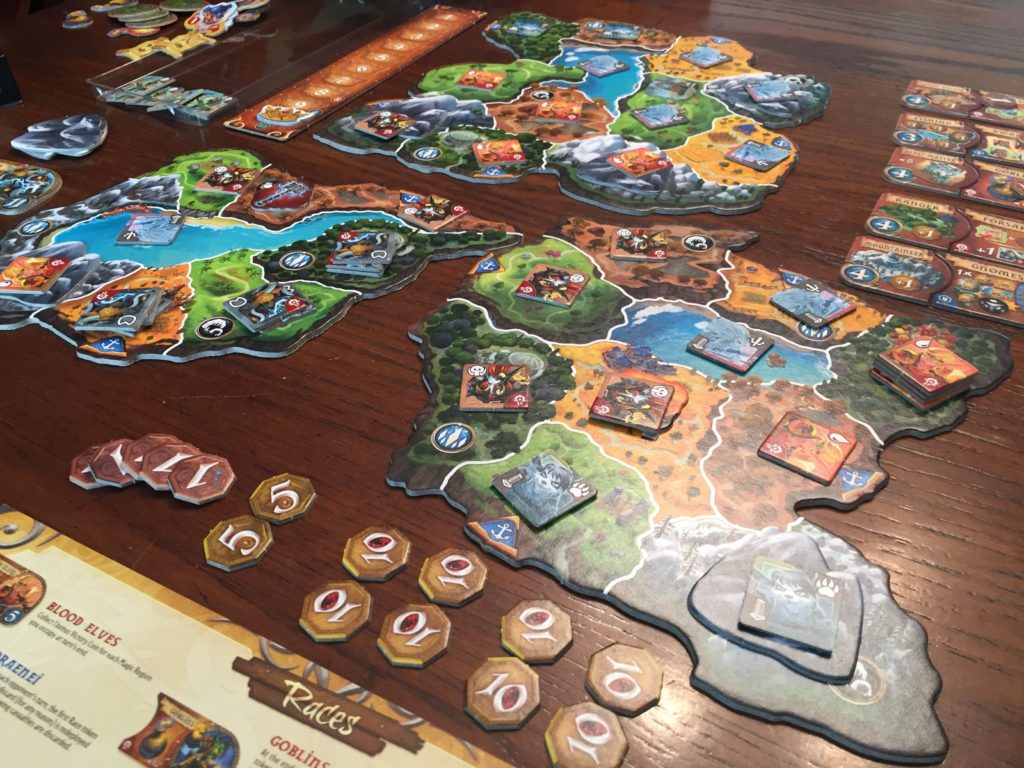 I love that licensed IPs have moved far beyond a re-skinned version of Monopoly. When I first heard that Small World was getting mashed up with World of Warcraft I got excited – it sounded like a really good match. And after playing several games and seeing dozens of different race and ability combinations, I can honestly say: it’s really good. 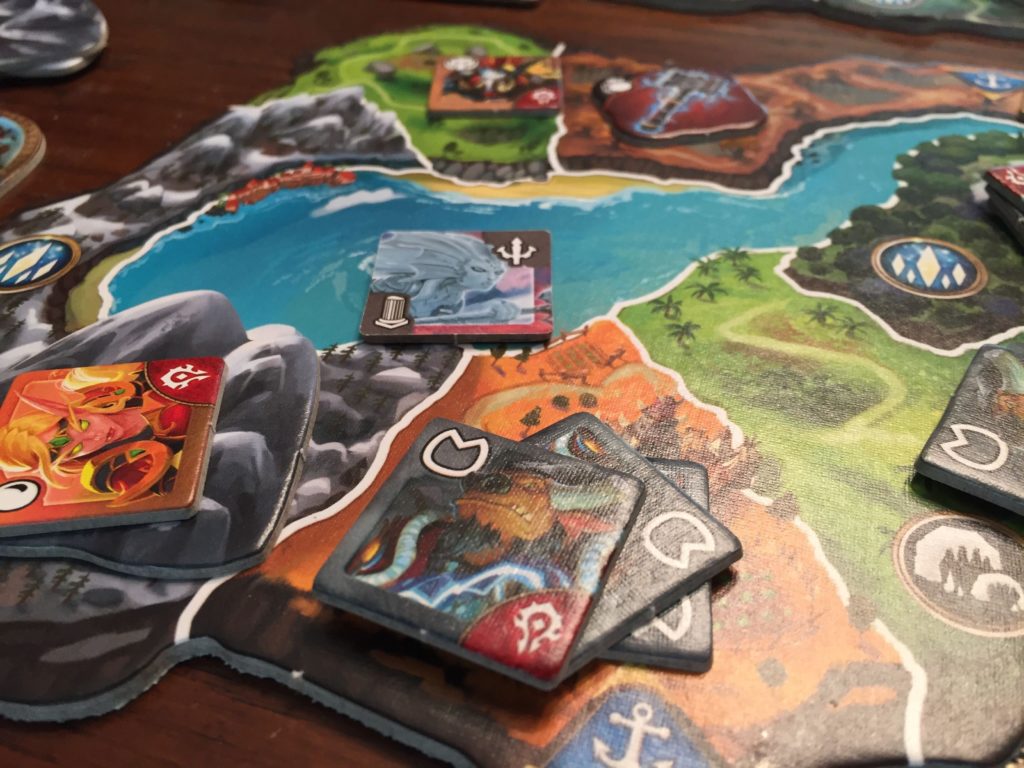 On the left, a lone Blood Elf token defends a mountainous region, while some Taurens push inland. The Naga can claim lakes, even in decline (as one is) and Doomhammer looks like it’s up for grabs in the back ground.

If you’ve never played Small World, here’s the basics: On your first turn you pick a randomly mixed race and power, and take a number of tokens from the box based on the numbers in the corners of your race and power. You then try to go out and grab as much land as you can. Each zone you try to conquer will cost you 2 tokens, plus one for each thing already on it. Mountains, forts, enemies, and other tokens will all cost you more of your tokens to conquer that zone. Once you’ve spread as far as you can that round you collect coins based on how many zones you have, plus any special powers. On your next turn you can choose to continue your conquests, or if you think you’ve gone as far as you can you may choose to put your current race into decline. Going into decline sees players flipping over their race tokens to the grayed-out side, and removing all but one of them from each region (unless a racial bonus or power says otherwise). Players still gain coins from the zones they hold, but don’t usually get any other bonuses. On the turn after going into decline, players choose a new race and power combo from the five available, and start conquering zones again. They get coins from zones that they hold both with their active and in decline races. In a normal game, most players will choose a new race and power two to three times. 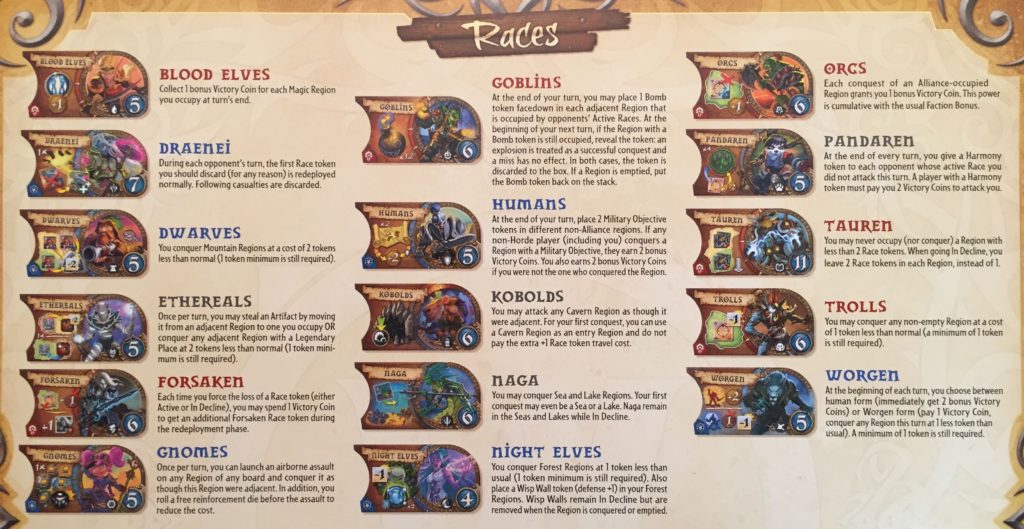 If you’re unfamiliar with World of Warcraft, it’s a fantasy online role-playing game with millions of players, also known as a Massively Multiplayer Online RPG. It has two main sides: the Alliance, made up of Humans, Night Elves, Dwarves, Gnomes, Worgens and more, and the Horde, consisting of Orcs, Trolls, Taurens, Goblins, Blood Elves, and the like. There are also Neutral races that players sometimes fight against including Naga, Kobolds, Pandaren, and Ethereals. In the game players take on a series of quests, gain levels and abilities, and unlock new areas, much like traditional RPGs. The big difference with WoW is you will constantly be interacting near, with, and against other human players. It is also dangerously addictive. I played WoW from early 2005 until right before the first expansion release, Burning Crusade, in 2007. 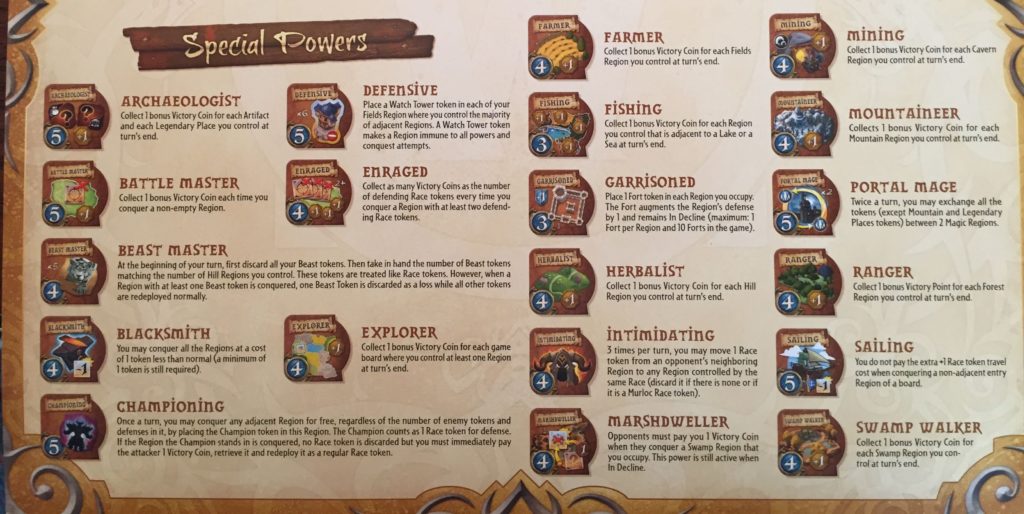 You’ll be referencing the Races and Powers page a lot, until you remember most of them.

So if you’ve played Small World before, and you know about World of Warcraft, what’s new? Well the biggest change is that instead of one solid board players are working around island continents, each with their own entry points. Around the outside of the board, regions marked with an anchor can be entered from for +1 token. Some races or powers allow for skipping this region or entering from somewhere else. This change makes the whole game feel more vulnerable, since now you can’t just blockade a corner or section of the map, knowing that you’d be safe from certain sides of attack. Also new is players can gain extra victory coins by defeating factions from an opposing race – the aforementioned Alliance and Horde. Another great change is the addition of Artifacts and Legendary places – by controlling zones with these, players can gain access to powers that give them bonus coins, extra conquests, or even bring back tokens from the box. And if you really missed the Player versus Player modes in WoW, there’s even a team-based mode where Alliance and Horde can face off. 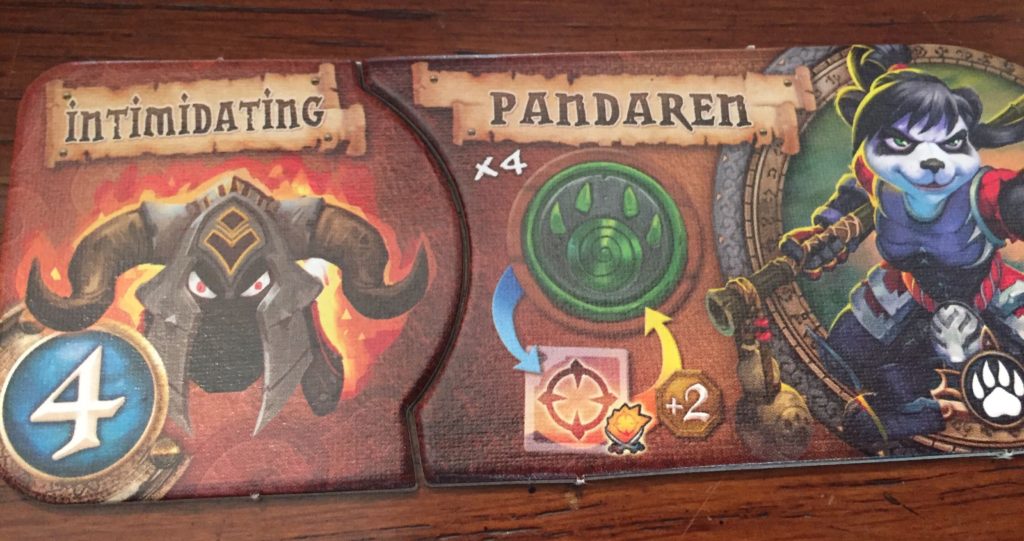 With a game that tweaks the formula of an existing series, the question always comes down to “is it worth it,” and in the case of SmWoW I’d say: yes. Unless you collected all the original Small World games and expansions, I think this is a better version to play. It’s got more family-friendly characters, more cutthroat and team options, and chances for some outrageous combinations to be unleashed (Beastmaster+Forsaken= nearly unstoppable). While it could be argued that the changes are small enough it should have just been another expansion, I’d disagree based on the map changes alone. Also no one is saying you have to throw out any old games, but if you don’t have Small World and you’re trying to decide what flavor to get, I would wholeheartedly point you to Small World of Warcraft. While it doesn’t reinvent the wheel, SmWoW manages to capture everything fun about Small World while still keeping a foot in what makes World of Warcraft unique and compelling.