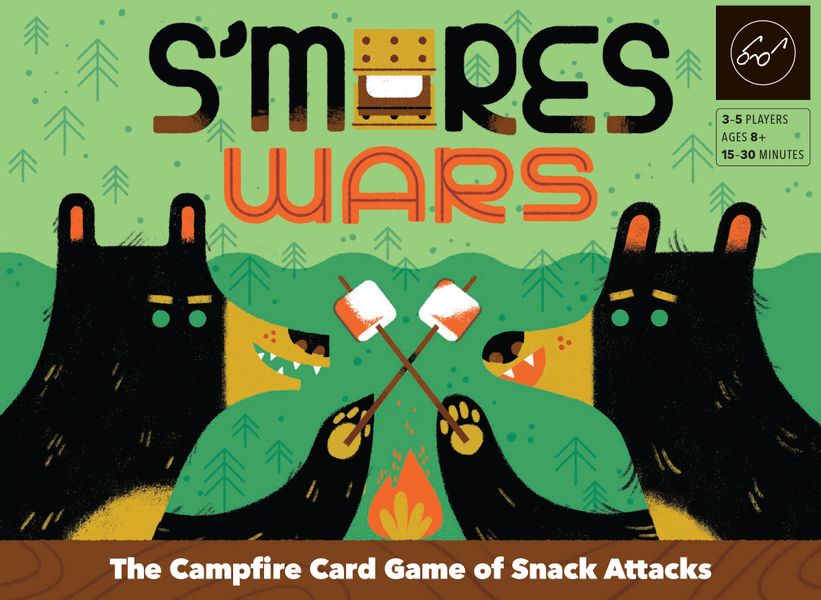 S’Mores Wars is a set-collection snack-attack game for 3-5 players where everyone is trying to build s’mores. Players will engage in rock-paper-scissors-style battles when two people are vying for the same ingredient, and play continues until one of the three stacks of ingredient cards is empty. Read on to find out if the game is a gooey melty classic or burnt on arrival!

Setup in S’Mores Wars is easy; each player chooses a color, then takes their five Battle cards, four round selection tokens, and one square S’moreage token. The ingredients are shuffled and stacked by type, and then each player is given a Tiebreaker card. These cards will settle any battles that would otherwise be stalemates. 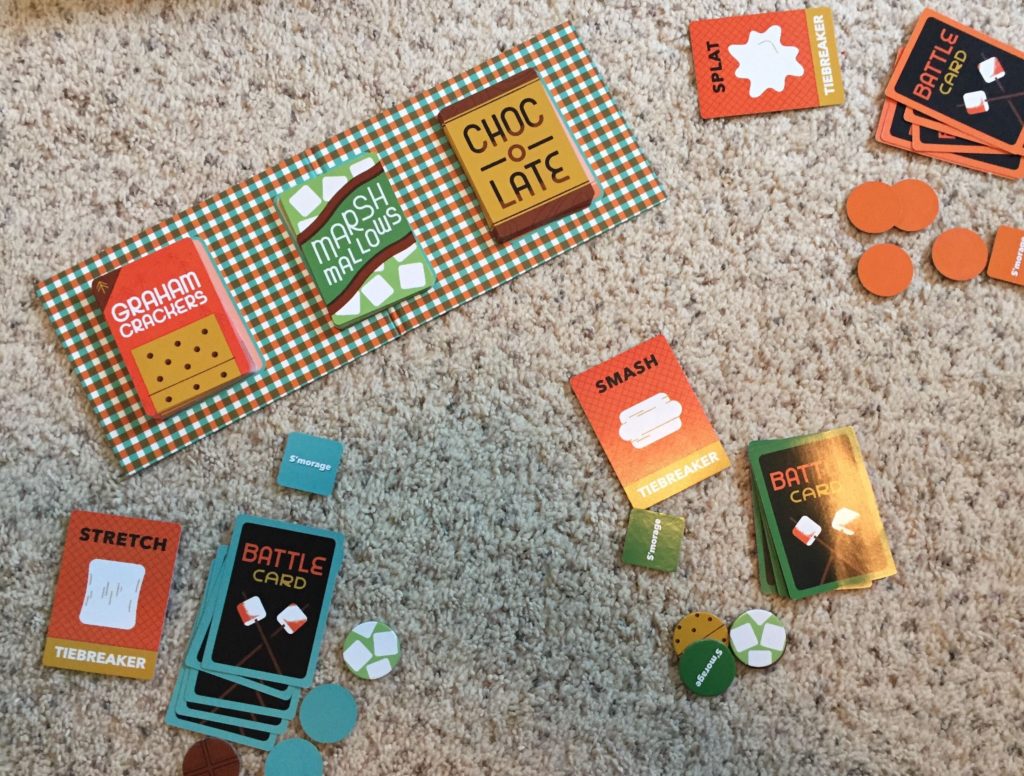 Ingredient cards (Chocolate, Marshmallows, and Graham Crackers, obviously) come in four different values, 1, 2, 3 and 5, and will directly correlate to a player’s score. You can make your s’mores with any point cards, but they have to have a Graham Cracker on the top and bottom, and the Chocolate and Marshmallow in the middle. Any ingredients you collect that cannot be immediately added to an existing unfinished s’more have to go in the S’moreage.

Gameplay consists of each player secretly choosing and simultaneously revealing the token of their choice for one of the face-up ingredient cards. If they have ingredients in S’morage they may choose their S’moreage token if they can place them. After all the tokens are revealed, ingredients are passed out or battles are pitched. If only one player chose any ingredient, it is theirs and they may place it on a s’more or in S’moreage. If two players chose the same ingredient, they must Battle for it. If three chose the same ingredient, it is discarded to the box. I do wish there were more Graham Cracker cards – there are only 25 of them versus the 15 each for Chocolate and Marshmallows. 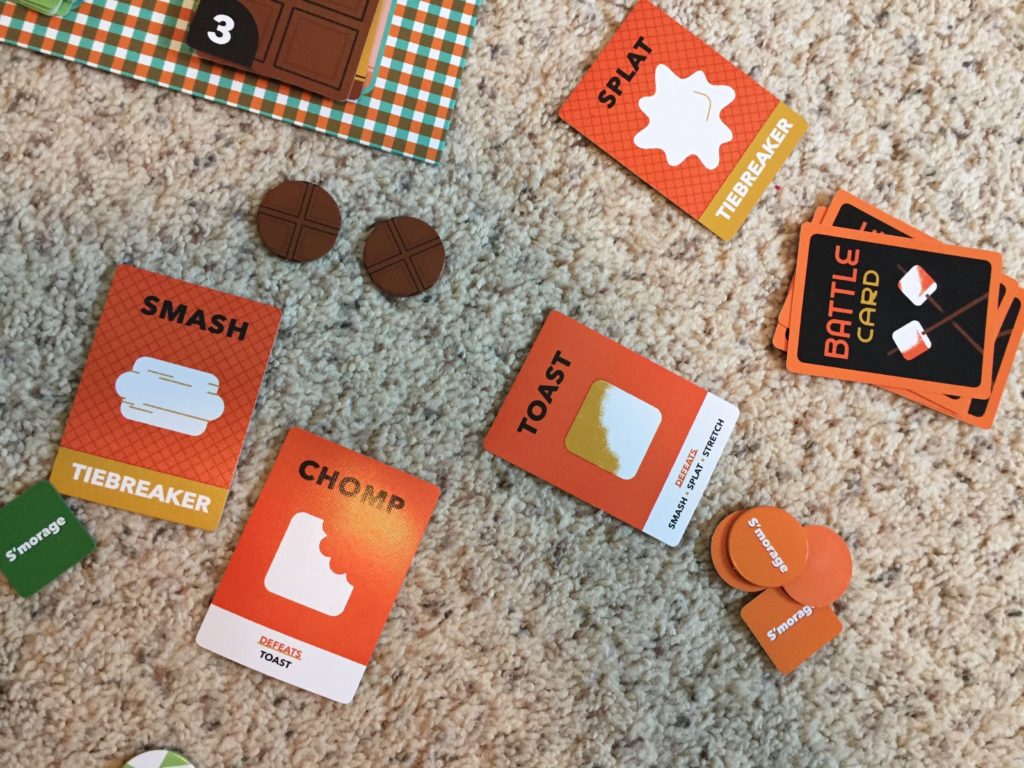 Green and Orange battle over the chocolate. Chomp beats Toast.

Battle cards are the way players fight over the ingredients, and it plays out as an asymmetrical rock-paper-scissors. Chomp beast Toast. Toast beats Smash, Splat, and Stretch. Smash beats Stretch and Chomp. Splat beats Smash and Chomp. Stretch beats Splat and Chomp. Once a Battle is decided, the winner gets the ingredient and the loser gets to try again next round. Once one of the ingredient stacks is depleted, players total up their points from s’mores. Cards in S’moreage are not counted, but any incomplete s’mores are -1 per missing ingredient.

On the surface, I had concerns that S’Mores Wars would be too complicated for little ones, but my Padawan (8) and Youngling (4) both managed to pick up on it with relative ease after a few rounds. The older kids and adults may recognize some of the possible strategies (go after 5 value cards, play Toast in battles first) but the secret simultaneous actions and five-way rock-paper-scissors manage to level the playing field nicely.

The tokens and playing board are a nice thick quality, and I liked how the board looks like a picnic blanket. I did notice that the cards were easily bent, which could be quite a problem if someone noticed a certain card had a standout bent edge in a hidden-action selection game. However, overall I liked the aesthetic they went for with a camping motif plus friendly bears who pop up in the rulebook and on the box. Between that and the game’s name, it’s eye-catching. 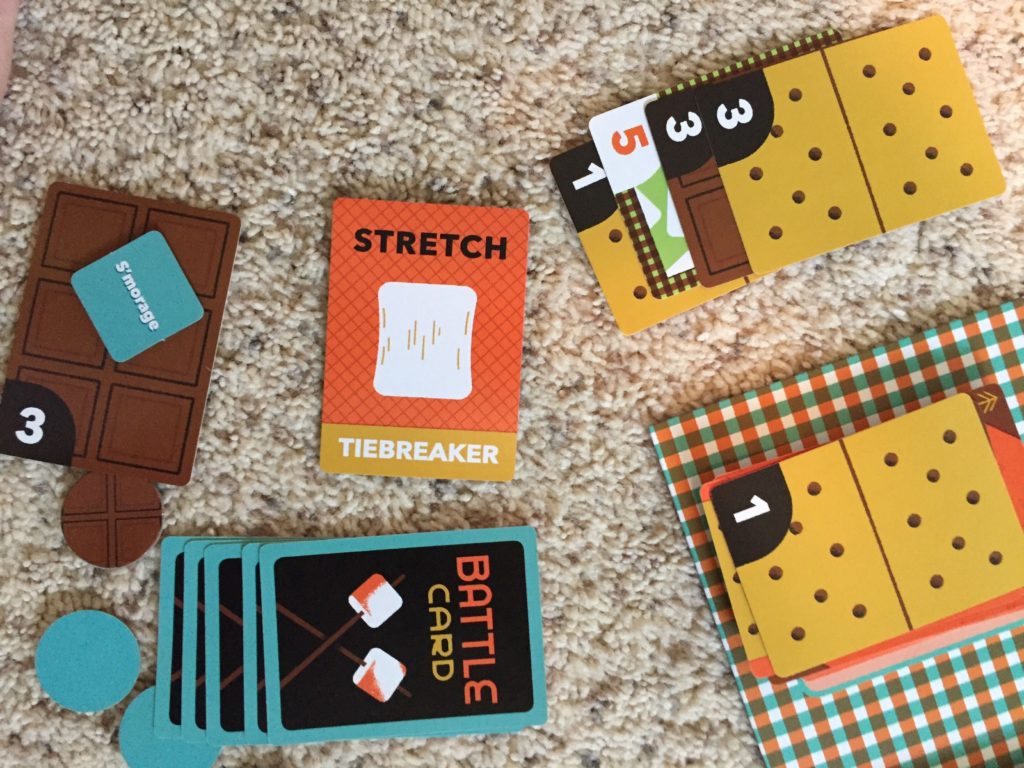 There is not a lot of meat here, though I wasn’t really expecting much. But if you like your games deep, strategic, and serious you probably aren’t looking for food puns and friendly bears anyways. This would be a great game to pack out in the woods with friends or family, and I think that’s what they were going for. It’s small, easy to explain, and would probably be made even better by consuming actual s’mores along with it (and now I’m hungry). Personally I’m not sure I’d have a lot of fun with this game without playing with kids, but when I played with my kids I saw a lot of smiles.

A review copy was supplied by the publisher.

If you want a pun-filled set collection game to fill your time while you and your family wait for the coals to be just right for actual s'mores, this game works. If you want a serious, deep, strategic game then look elsewhere.