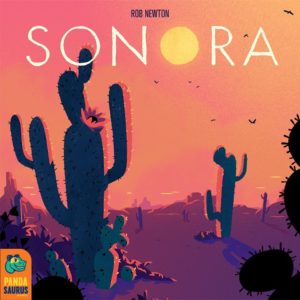 Sonora is a new addition to the popular roll/flip-and-write genre, but it puts a dexterity spin on it. It is touted as the world’s first flick-and-write game! In this game, players take turns flicking discs onto a recessed board, and depending upon where they land, they use them to fill out different sections of their game sheets. Sonora is much more strategic than most flicking games, and its 4 different, interwoven minigames provide some interesting combo potential.

Sonora caught my interest both for its theme and its beautifully evocative art. I have lived in Arizona, the heart of the Sonoran desert, for almost my entire life, so the visual look of this game really spoke to me.

This flick-and-write game combines dexterity silliness with a Ganz Schön Clever-style minigame system. It’s an odd combination, to be sure, but it’s certainly something I have not seen before.

The goal of Sonora is to earn the most points, and players accomplish this by advancing in 4 separate minigames. Each round, they take turns flicking wooden discs into a recessed play area, which is divided into 4 quadrants.

Everyone has 5 numbered discs to use, and when they have all been flicked, players activate them based on where they ended up. (As in most flicking games, players’ pieces can bump each other along the way.) 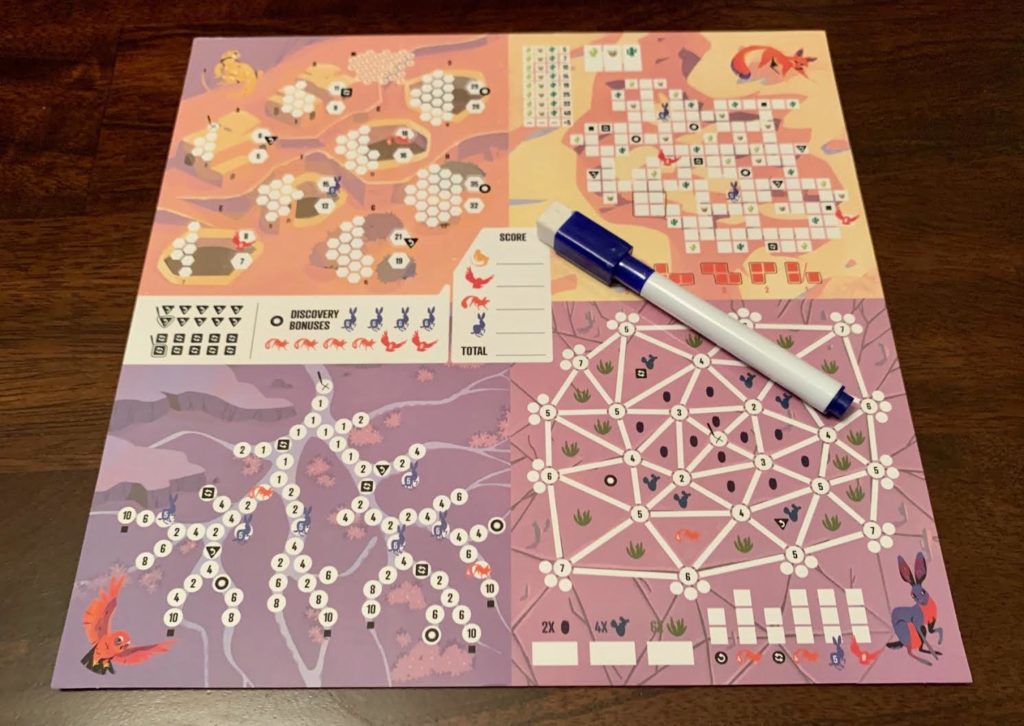 The real meat of the game lies in the player sheets, however. They are divided into 4 sections, corresponding to the 4 quadrants of the board. After all discs have been flicked, players examine each quadrant individually and write on their sheets according to the total value of their discs in that area. As an example: 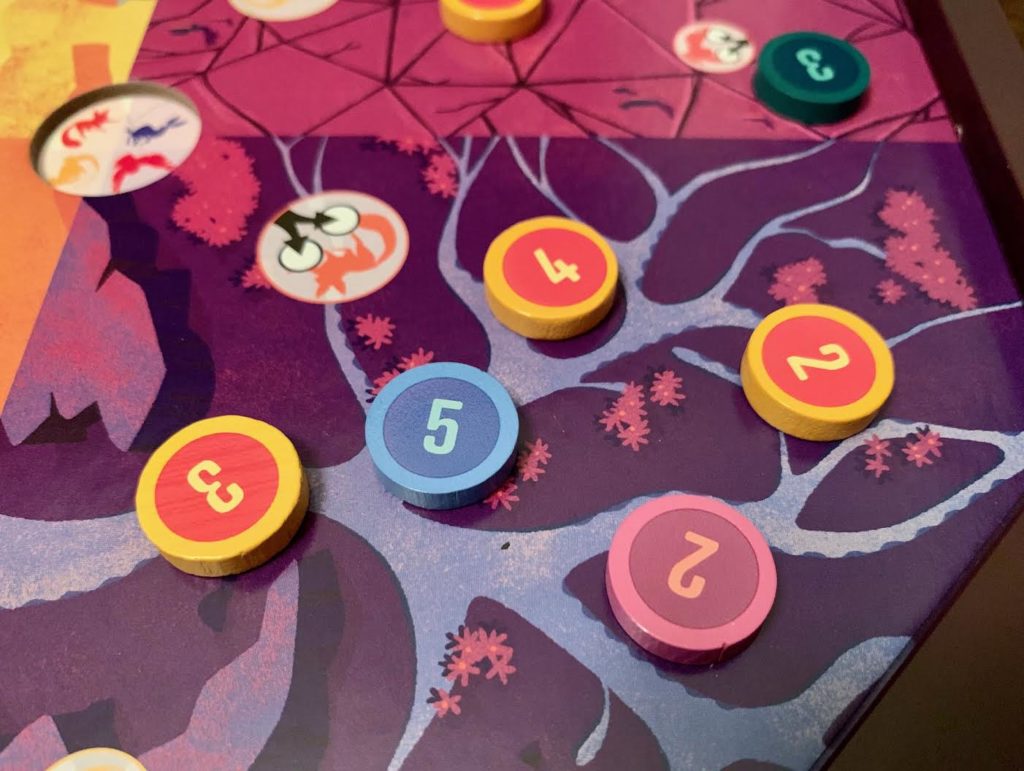 Here, the yellow player’s discs have a total value of 9.

The flicking field has some special features, as well. If a disc lands in the recessed center area, it is immediately removed, and its owner can place it on any of the 4 sections of her sheet. (In essence, the center is a wild space.) Also, each quadrant has areas that grant special bonuses for other quadrants. These are typically even more desirable than landing in the center, but harder to lock in.

As a brief rundown of each of the minigames:

CLIFF-DWELLER RUINS: In this section, players check off hexes, trying to completely fill out buildings. They may check off as many hexes as they have points on their discs in the quadrant. The first player to complete each building earns the larger number of points; anyone to complete it later earns the lower number. (This is the only section that is resolved in turn order. All other sections can be resolved simultaneously.) 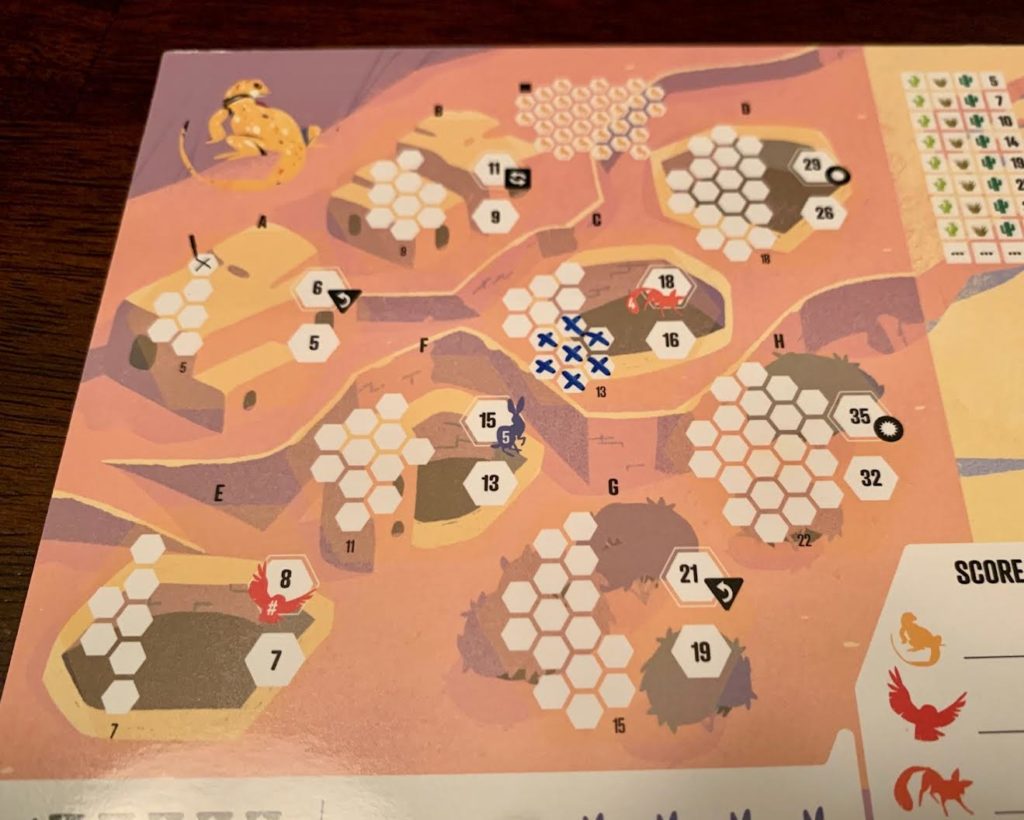 CANYON: This section is a polyominoes puzzle. Each disc that lands in the canyon quadrant allows its owner to draw a shape according to its number (e.g. a “4” disc can be used to draw an “L” shape piece). If a piece covers an icon, the icon’s ability is resolved immediately. These can offer bonuses in other sections, or they can earn end-game points. 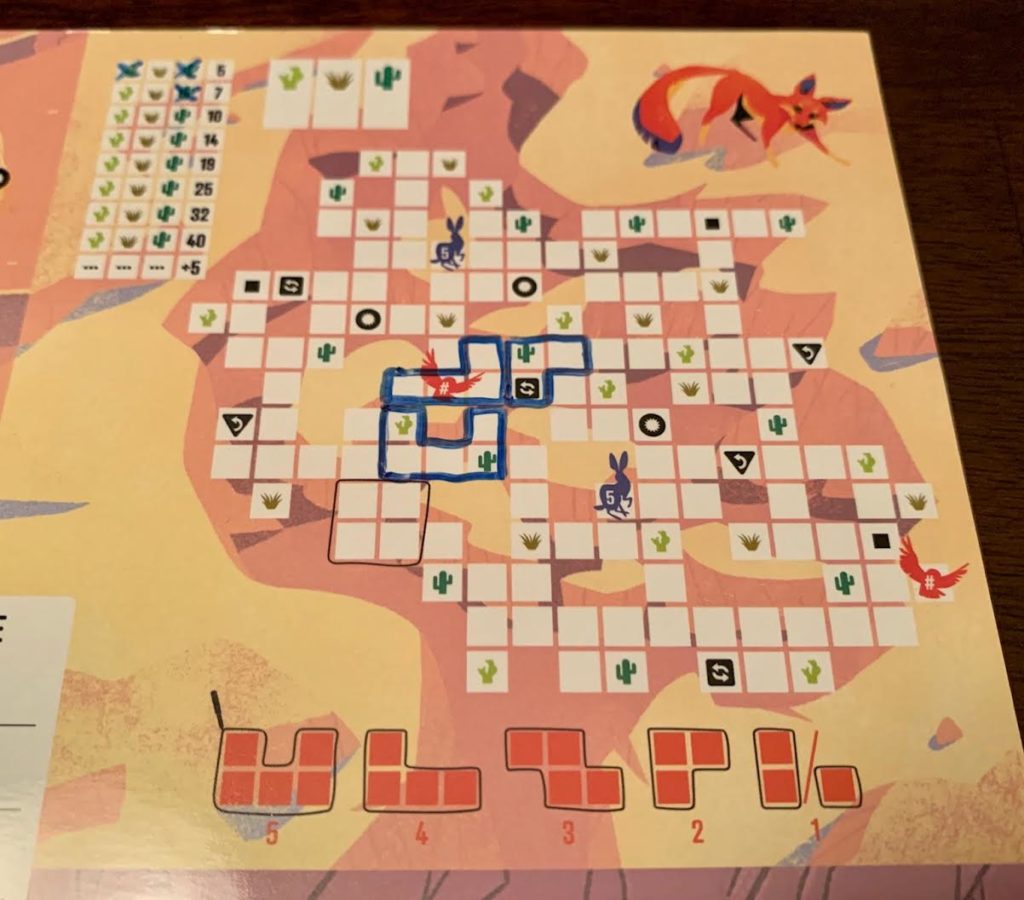 CREEK BED: Each disc in this section allows the player to advance along the paths. The player marks off the number of spaces shown on the disc, circling the last one and crossing off the others. Some spaces grant immediate bonuses, and others grant end-game points. The farther down the paths players get, the better the rewards. 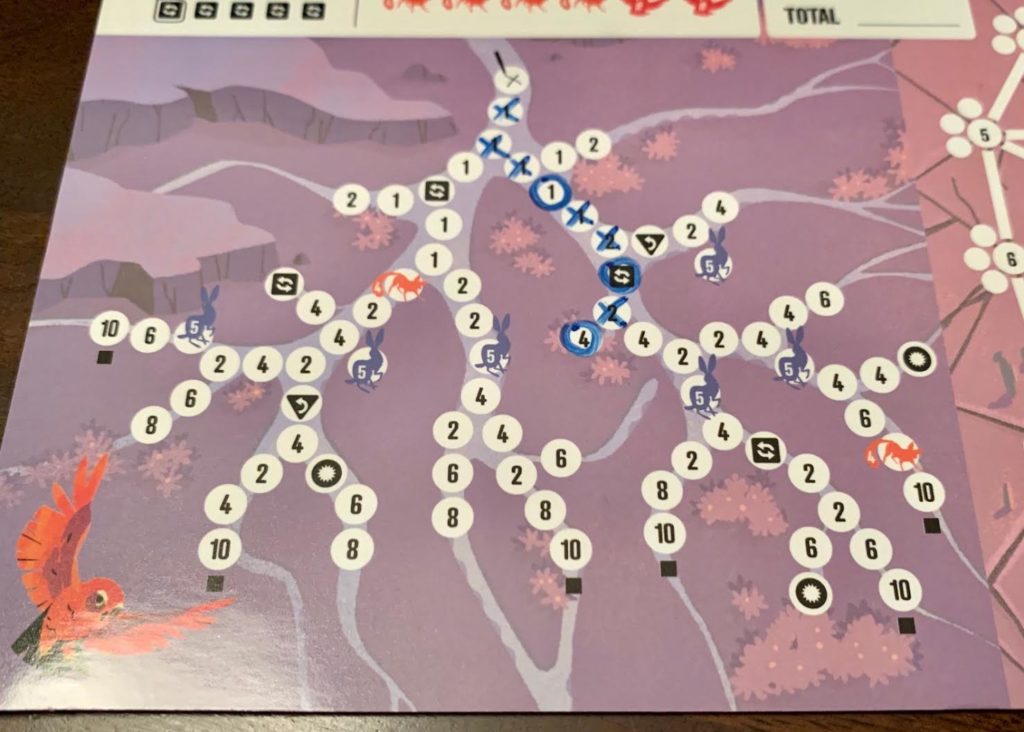 MUDCRACKS: This section is all about encircling icons. First, players add up the total value of all their discs in the area, and then they mark off spaces that add up to that number, drawing lines to connect them. Each icon a player encloses is activated, either granting immediate bonuses or end-game points. 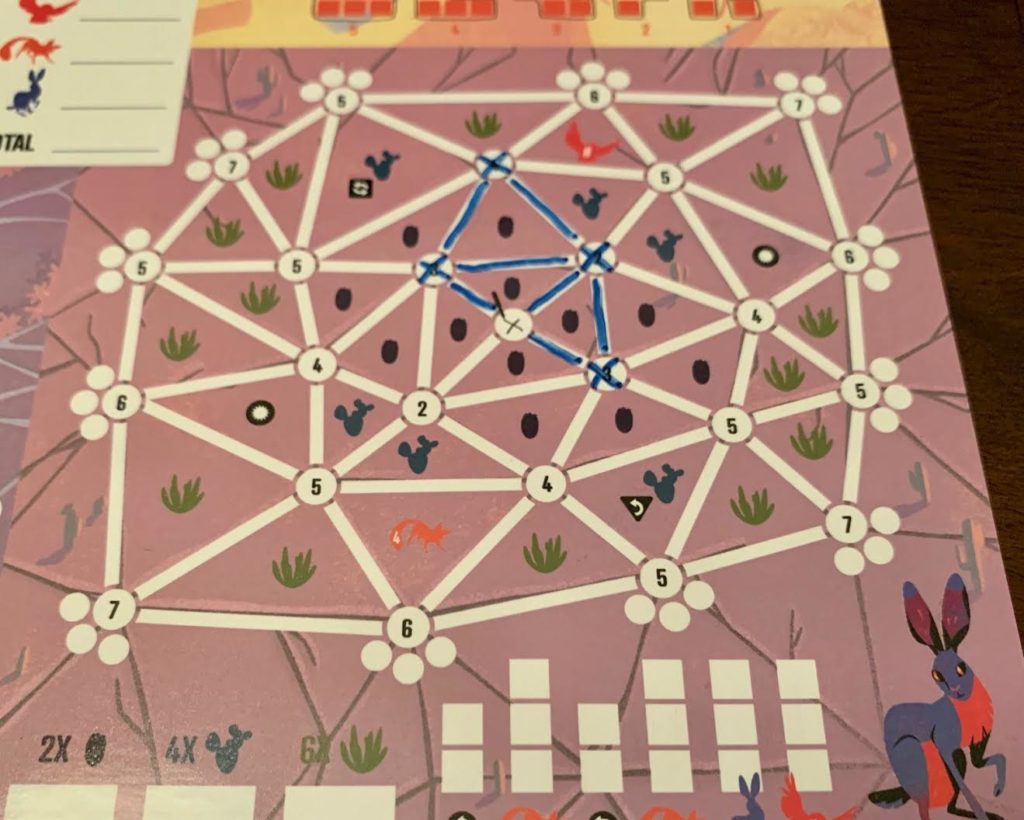 A game of Sonora lasts between 5 and 7 rounds, depending upon the desired length. After the final round, players total up their scores, and the player with the most points wins!

That said, this game works pretty well. The flicking feels a bit arbitrary, but this is probably okay, since it’s really just a randomizer of sorts. With so much potential for bumping and jostling other pieces, it is hard to flick with any real goal in mind (except maybe landing in the middle space). Rather, the dexterity element in Sonora feels more like “flick the discs and make the most of them wherever they wind up.”

What’s cool about this, though, is that no matter where they wind up, players can always use them well. This is something that I really like about this game – there are no “bad flicks,” save perhaps for pieces flying out of the play area.

As I mentioned before, the real guts of the game lie in the player sheets.  The minigames each feel very unique, and it’s neat how they interact with one another. I brought up Ganz Schön Clever earlier, but I’ll mention it again here. Much like that game, the different challenges on the player sheets combo off of each other. Covering a space in one section might trigger an ability in a different section, and so on.

Sonora‘s production is lovely, with vibrant art and high-quality components. The player sheets come laminated, so they can be reused endlessly. Likewise, the flicking area is sturdily constructed and the discs slide around it well. The box may be a hair too deep for what’s included, but this is a minor issue at worst. All told, it looks great, and the cover art is, in my opinion, some of the best in recent memory.

Fans of roll/flip-and-write games will probably want to check out Sonora, if for no other reason than it tries something new and different. It’s not my favorite game in the genre (Pandasaurus’s Silver & Gold is quickly claiming that title), but I definitely had fun trying it out.

Sonora is a very unique experience. It will probably appeal to fans of roll/flip-and-write games, if for no other reason than it does something completely unlike any other game in the genre.