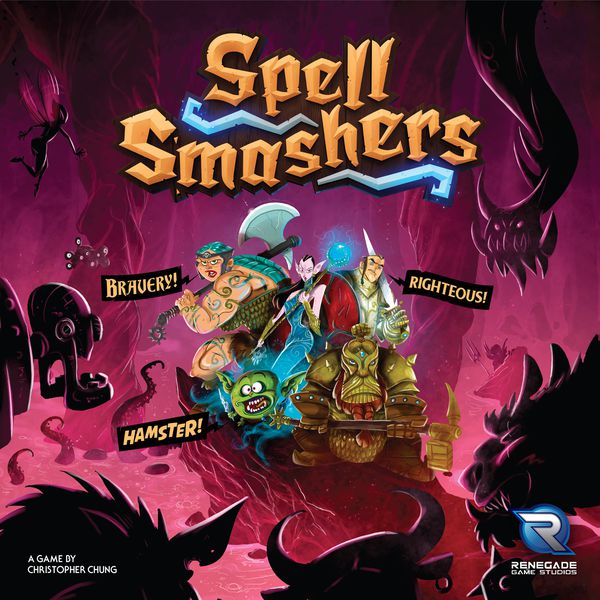 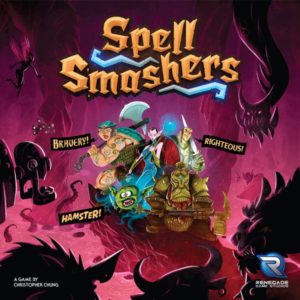 Spell Smashers is a word game with a cool fantasy theme. Players use their hands of letter cards to create words and battle monsters. The harder the words hit, the more points they are worth! With a tongue-in-cheek visual style and fast-moving gameplay, it is a fun, silly family game.

A fantasy word game is something you don’t see every day. In fact, I am hard-pressed to think of another one. Spell Smashers from Renegade Game Studios puts these disparate genres together in a zany game for up to five players.

The goal of Spell Smashers is to earn the most points over seven rounds. Players primarily earn points by making words, which they use to fight monsters.

At the start of the game, everyone receives a hand of 7 letter cards, consisting of 4 consonants and 3 vowels. Each player has their own, individual tableau, with spaces for quest cards, monster trophies, point tokens, and more. A player’s starting area will look something like this: 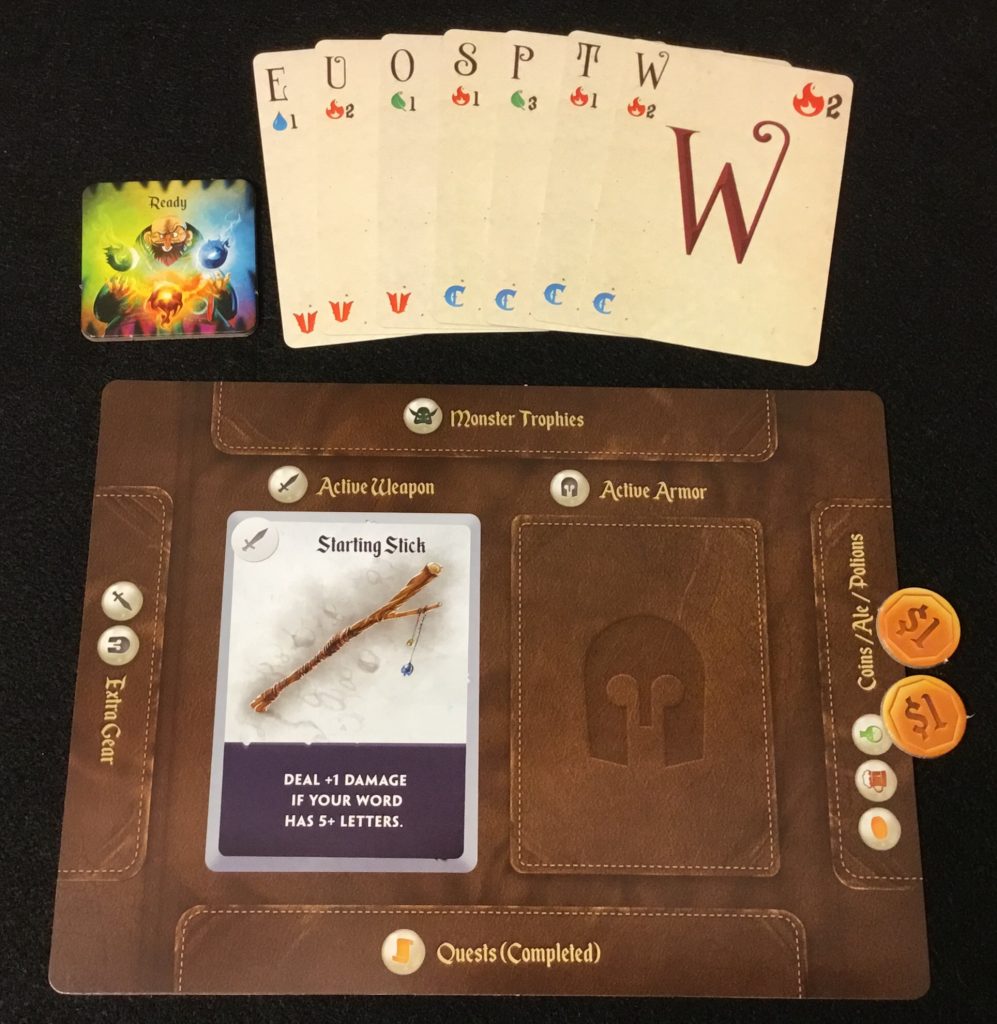 (Cards are normally kept secret, but for the sake of illustration, this player’s starting hand is shown face-up.)

Note that the player’s tableau begins with the “Starting Stick” item, which grants a small bonus. As the game progresses, players may purchase better weapons and armor to help them out.

In the central play area is a main board, showing locations players can visit. When set up, the main tableau looks like this: 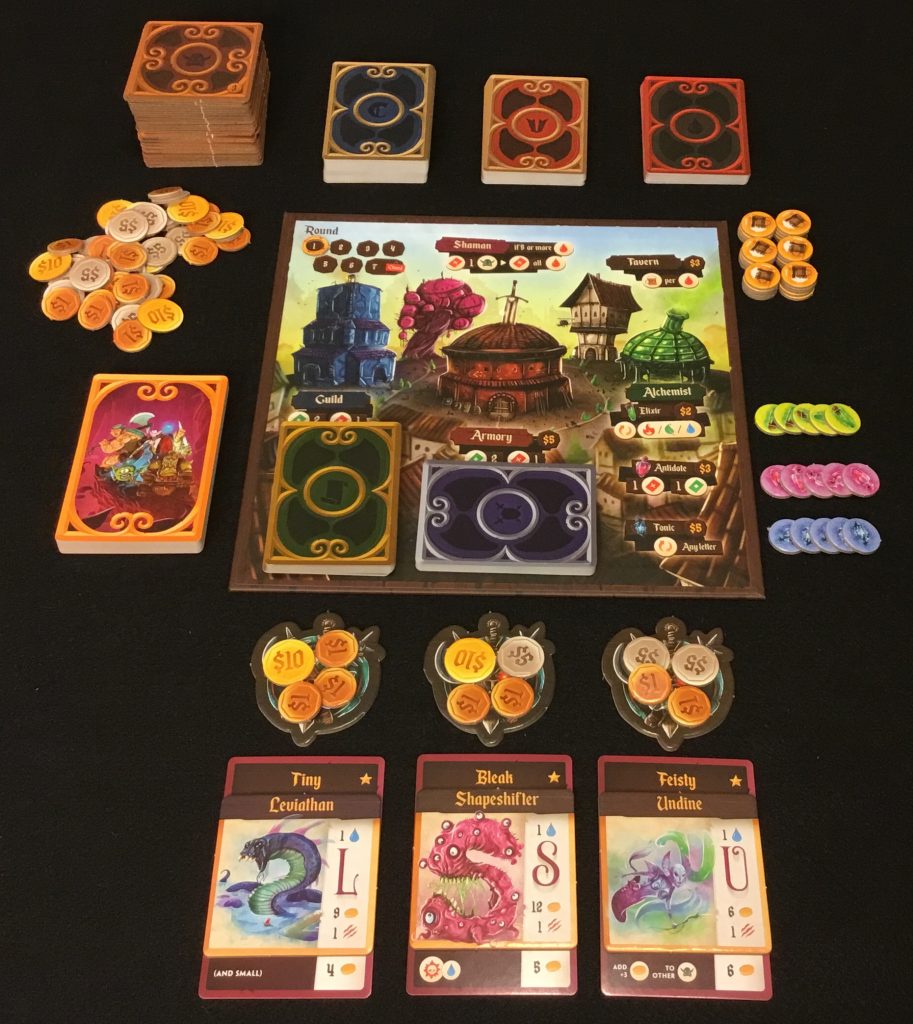 Notice that the bottom of the tableau features a trio of monsters. Here is a closer look at them: 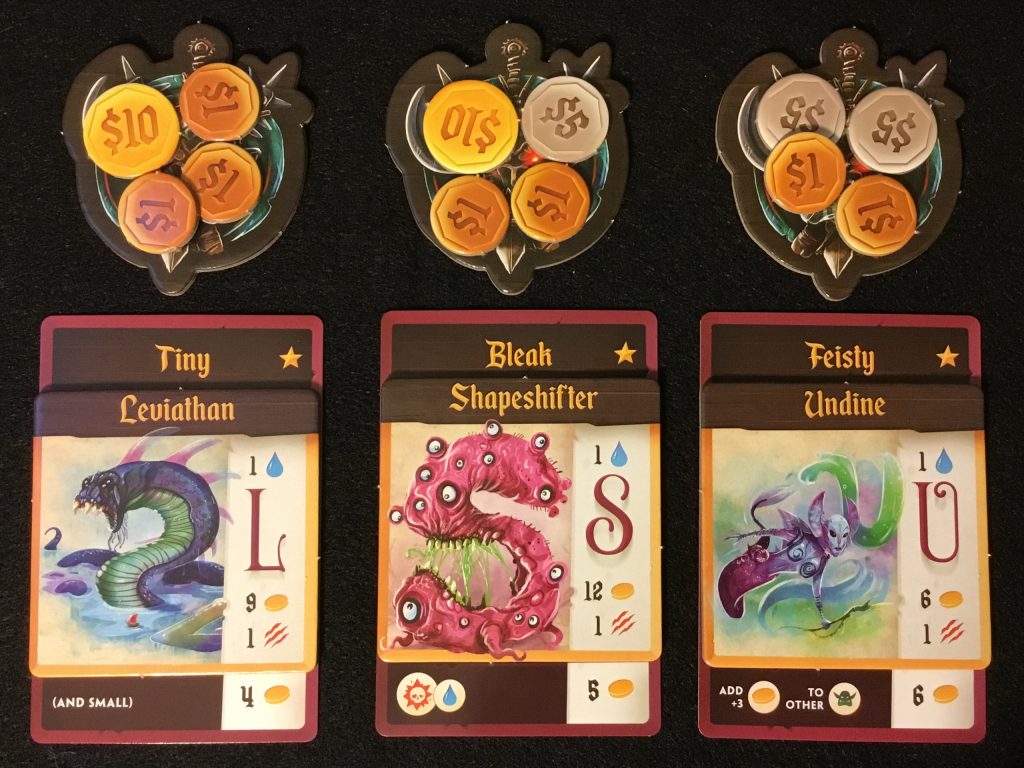 The “Tiny Leviathan” seems like a paradox. I suppose it’s similar to a “jumbo shrimp?”

Each monster has a number of coin tokens in the area above it—these represent HP. A monster’s health is determined by the sum of the HP on its tile and modifier card. As players deal damage to the creatures, they earn these HP coins. It’s actually a pretty elegant system: it handles both point allocation and health tracking in one single mechanism.

The turn sequence is played out in a few simple phases. First, everyone simultaneously makes a word from the cards in their hand. Then, starting with the player who made the longest word, players take turns dealing damage to the monsters. Here is an example of how this might look: 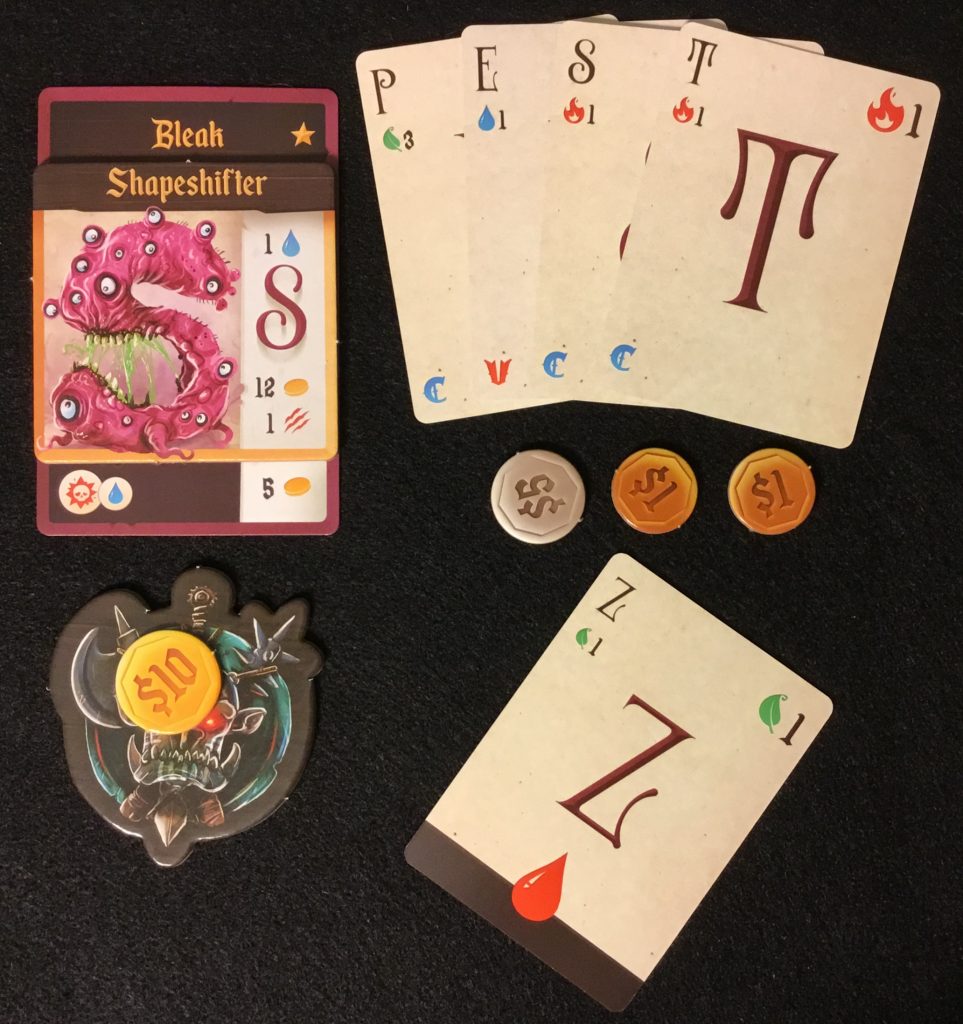 This player is attacking the Shapeshifter with the word “PEST.” Looking at the cards’ numbers, we see that this word deals 6 damage (3+1+1+1). However, since the monster is vulnerable to water damage (as indicated in the lower-left corner of its card), the player inflicts an extra damage from the “E,” because it is water type. Thus, she inflicts 7 damage, earning 7 points.

Once this has been resolved, the monster then hits back, inflicting a single wound (note the “1” next to the claw marks icon). The player draws the top wound card, a “Z.” Wounds may be irregular letters like this, or they may be a sequence of letters like “IS.”

If a player defeats a monster, she takes its tile, permanently gaining its letter. Had the attack destroyed the Shapeshifter, for instance, the player would earn an “S” going forward.

When all players have played their words, they may take actions on the board. These include: 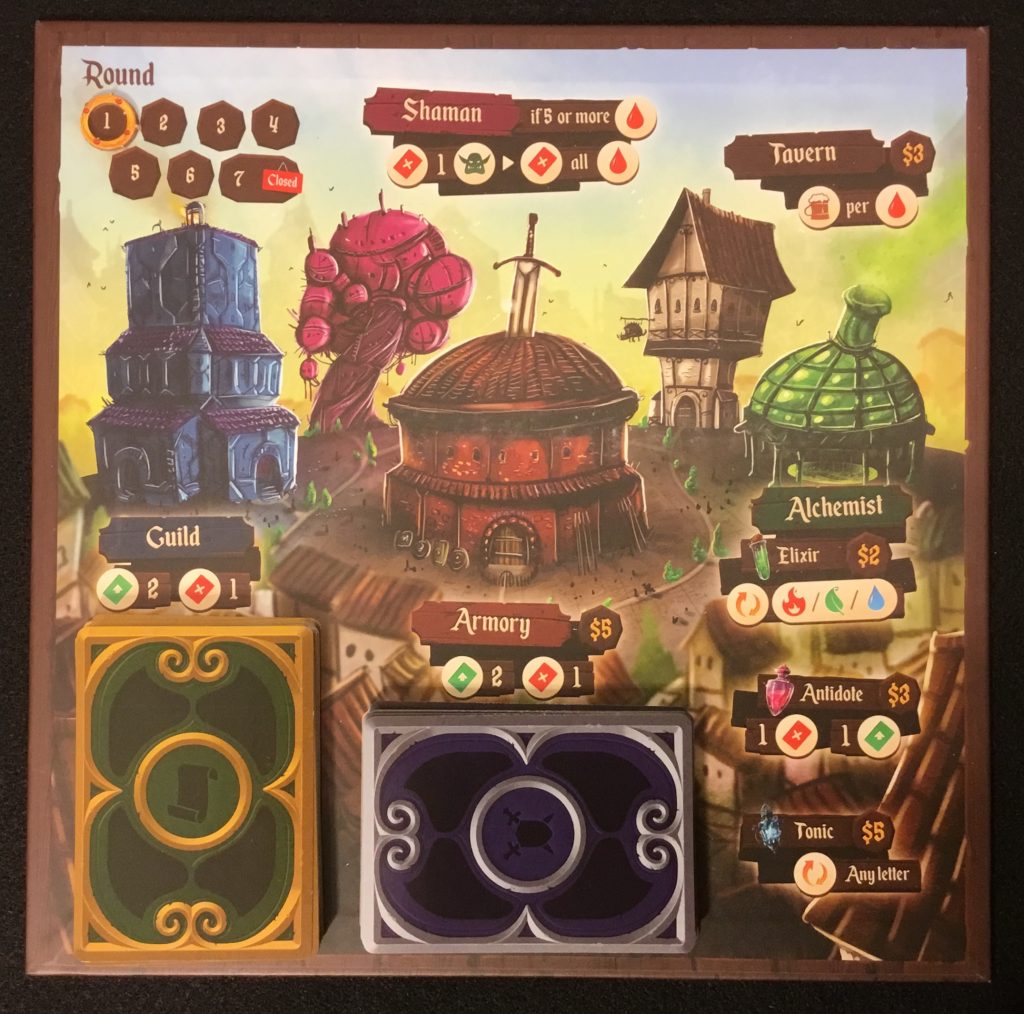 At the end of the round, players refill their hands to 7 cards. Each active monster receives one ale token, an extra point for the first player to damage it in the coming round.

At the end of the game, the player with the most points wins.

This box is simply packed with components. Spell Smashers includes a ton of cards and tokens, creating a much larger footprint than one would expect from a word game. Everything looks very nice on the table, and the artwork helps the faux-D&D theme to come through nicely.

The gameplay is very fast-moving. Since players formulate their words simultaneously, there is little downtime; in total, the game only takes 20-30 minutes. The rules are easy to learn and understand, so new players should have no trouble getting started.

Mechanically, there are a lot of things to like about Spell Smashers. Unlike many mass-market word games, this one has a solid game system backing it. It actually offers real, strategic decisions. Where other games of the genre are usually just “who can make the longest/best word?,” Spell Smashers has more to consider. To continue my play example above, suppose the player was also able to make the words “JEST” or “PAST.” In many word games, it would not matter which word the player chose – “PEST” would just be an arbitrary pick. Because of the elemental nature of the cards and the monsters’ characteristics, however, one word may be more effective than the rest. This gives players agency in their decisions, and I really like that.

Additionally, it is interesting that the wound cards are not necessarily “bad,” and can even be helpful. Many of them bear multiple letters, which opens up the possibility of making longer, more powerful words. One of the quest cards requires its owner to make an 8+ letter word—this would be tough to do WITHOUT having a wound!

Spell Smashers has some issues, though. First, the cards only bear their letter(s) in one corner, rather than in two opposite corners like most playing cards. This means that the cards have a “right side up,” so players have to make sure their cards are oriented properly and not “upside-down” in their hands. Admittedly, this is a minor complaint, but it’s something I noticed while playing. 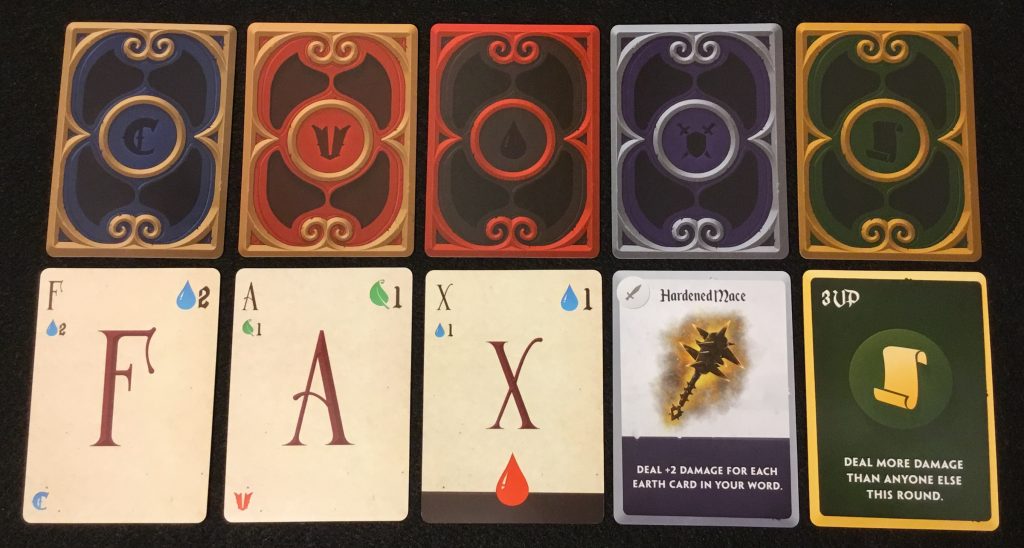 A more significant issue lies in the game’s keywords and symbology. The rulebook has a chart spelling out what some of the icons mean (e.g. “This monster is vulnerable to fire damage”), but it leaves out necessary information. Notice that the “Tiny” characteristic of the Leviathan monster bears the words “(AND SMALL)” in the lower-left corner. I am unclear what this means, and I cannot find any mention of it in the rules. Same with the “(AND HUGE)” characteristic. These undoubtedly refer to in-game effects, but I don’t know how they work. It seems like the rulebook needed a bit more proofreading.

That said, though, the core game of Spell Smashers is fun and enjoyable. It has a sort of Paperback vibe to it; it’s a word game with real, meaningful decisions, and fans of family games will likely have fun with it. The production is nice, and the nuances are interesting. If you are looking for a word game that offers cool decisions and an amusing theme, I recommend giving it a try!

Though it's not perfect, Spell Smashers is a cool game. I think the core idea works well, and its hobby-game sensibilities elevate it over many mass-market word games.