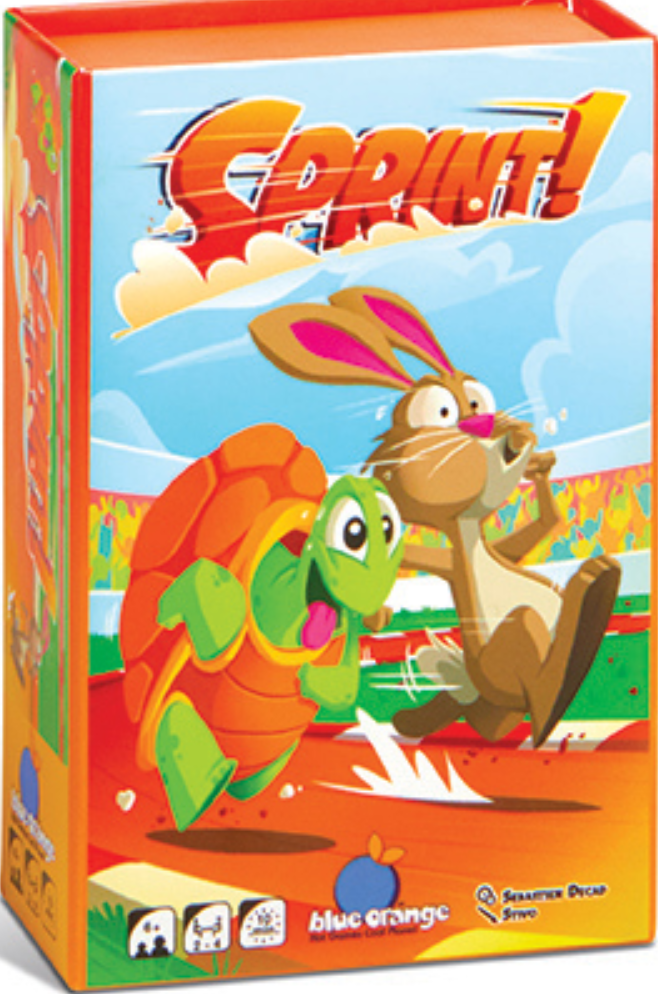 Sprint! is a small game in which players work together to help the tortoise beat the hare in their classic race. In this game, players take turns attempting to draw a precise number of cards by cutting a deck with one hand. If successful, the tortoise moves. The hare then moves (or rests) based on the draw of a card. It is a fun game for children and families.

I always enjoy racing games, but I have never played one quite like Sprint! from Blue Orange Games. In this unique family game, the players, representing the tortoise, work together to win a race against the hare, controlled by the game itself. 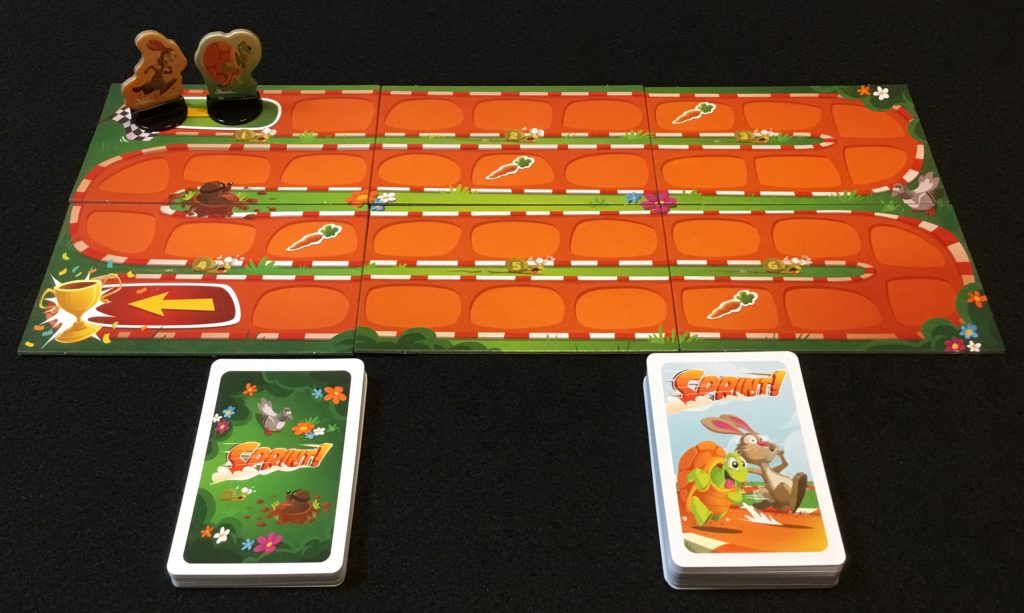 Sprint! features a dexterity element, but not the traditional balancing/stacking/flicking kind. Instead, players take turns trying to cut a specific number of cards from a deck in a single, one-handed maneuver.

Each turn, an objective card is revealed, which tells the current player how many cards he will try to draw.

Then, using one hand and without riffling through the cards, he takes a stack off the top and counts the number of cards he pulled. 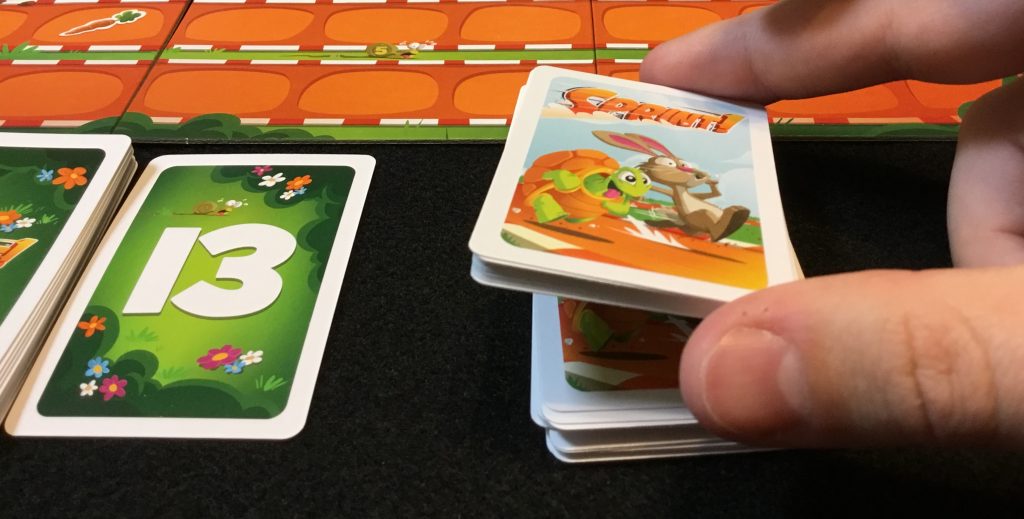 Depending upon how many he drew, the tortoise moves as follows:

The tortoise does not move for any other result—meaning that if the player drew more than the required number, or was more than 3 cards short of it—the tortoise stays put.

In the example above, the player drew 11 cards, so it moves 2 spaces.

After the tortoise’s turn, the hare moves according to the top card of the race deck. Here are some examples of its movement cards:

Some of the hare’s cards advance it a specific number of spaces (2 or 4, in these examples). Others may move it as many spaces as the tortoise moved, or to the same space as the tortoise, or to the nearest “carrot” space—note that the hare can move backwards! Occasionally, the hare will draw a “rest” card, meaning it won’t move this turn.

When either racer reaches the finish line, the game ends. If the tortoise completed the race, all players win. Otherwise, if the hare ended the game, the players lose.

The core mechanism of Sprint! is very amusing: try to draw x cards, without going over. It is surprisingly tricky, but it’s possible to be good at. In fact, it is easy to try yourself; grab a deck of cards and see if you can pull exactly 17, or 12, or 23.

I’m surprised at how close the race outcome tends to be. The central game system seems so subjective—players could either be really good or really bad at it—but somehow, it seems balanced. As a game-designer-wannabe, I’m impressed.

Sprint!’s production quality is okay, but it is does not have the same “wow” factor as many other Blue Orange titles. To be fair, it’s just cards, tiles, and two standees, and these components, while minimal, do work well. This game comes in a very small package, making it great for playing in places like restaurants or airports. Here is a standard deck of playing cards for scale: 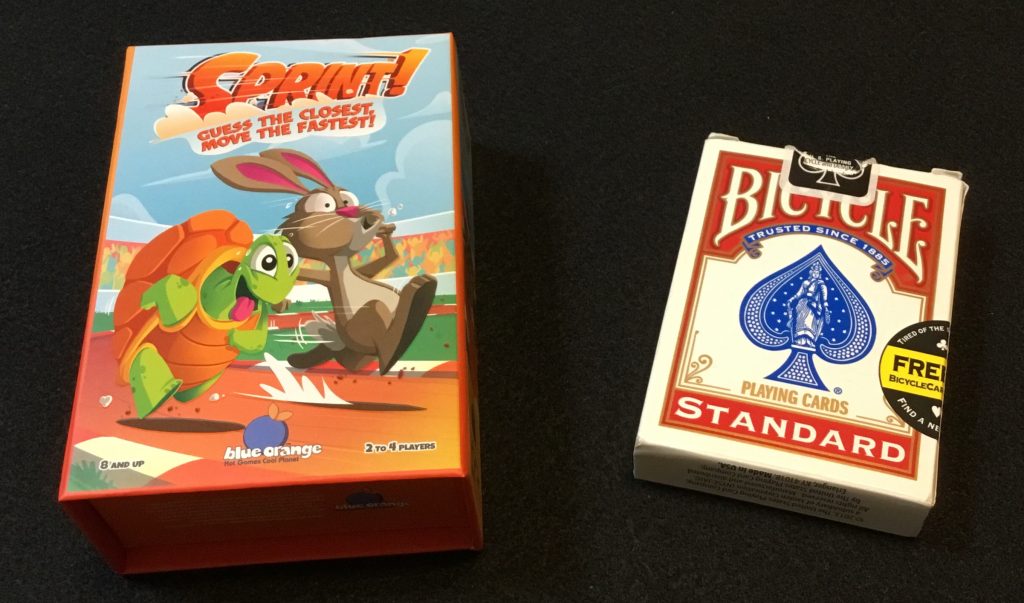 It is quite literally pocket-sized.

This game involves an enjoyable amount of laughing and cheering. Since the race is often close, players really start to feel the pressure near the end. In one game, we had a situation where I had to draw exactly 23 or 24 cards to win; any other number would have almost certainly given the hare the game. It felt like everything was riding on my ability to draw perfectly, so when I successfully drew 23, we all erupted in cheers. It was awesome.

Personally, I enjoyed Sprint! and found it to be a fun exercise in visual quantity estimation. It will be a couple of years before my kid is old enough to grasp it, but hopefully she and I can play it together down the road.

Sprint! is a race game unlike any I have ever played. It isn't my favorite Blue Orange game, but it is still a fun experience for families with kids.