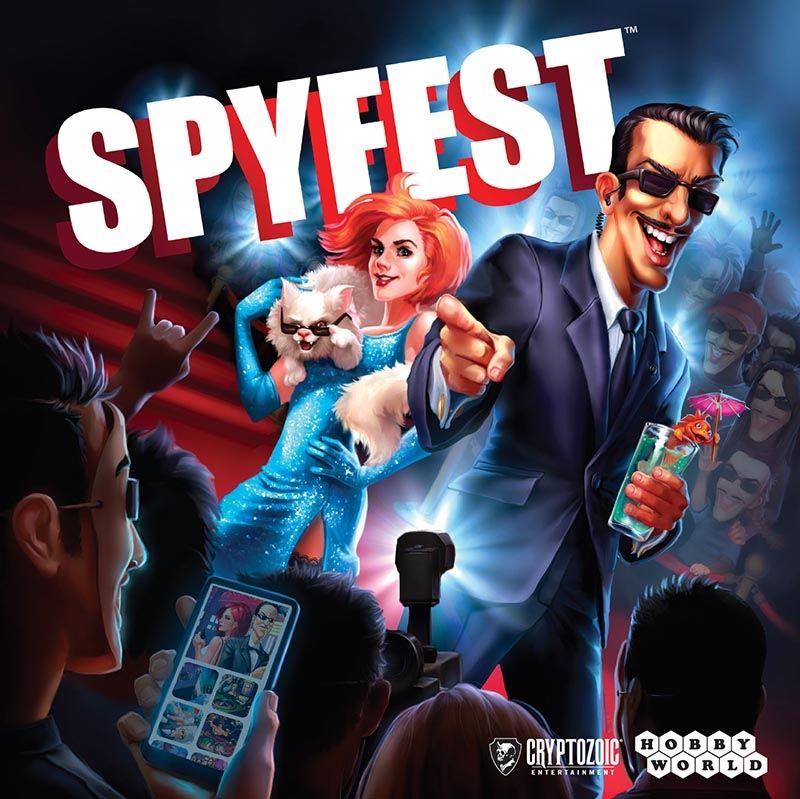 In the “before times,” Spyfall was one of the best party games of the 2010s, and a precursor to Codenames, Decrypto, and other “partegy” (party-strategy) games that required you to be clever amidst the laughter. It has led to various sequels and licensed versions,  and then designer Alexandr Ushancame back with a brand new party game that shares the similar Spy theme. Unfortunately, it came out at the worst time in recent history to release a 4-10 player party game, but hey, things are going back… slowly. So, I was finally able to play Spyfest recently! But was it as good as Spyfall?

Unlike other departments here at Geeks Under Grace, we often don’t include a content guide because many board games are quite harmless — but others are not. There are far more offensive games out there than Spyfest, but it was enough to warrant inclusion. The spy in the game takes on the role of either a historical character or a fantasy character; this is indicated by a card with full-color art that’s just gross in its attempt to be funny. In addition to just being weird and unnecessary, a female player in our games commented that she didn’t appreciate the female characters represented by cross-dressing men and would have rather seen actual female characters in the game. I would assume transgender players may also find this offensive. Spyfall had a few unnecessarily busty female chatacters showing themselves off, but this feels worse.

The following image is from Cryptozoic’s images on the Spyfest landing page on their website. The image communicates what I’m saying better than words can. 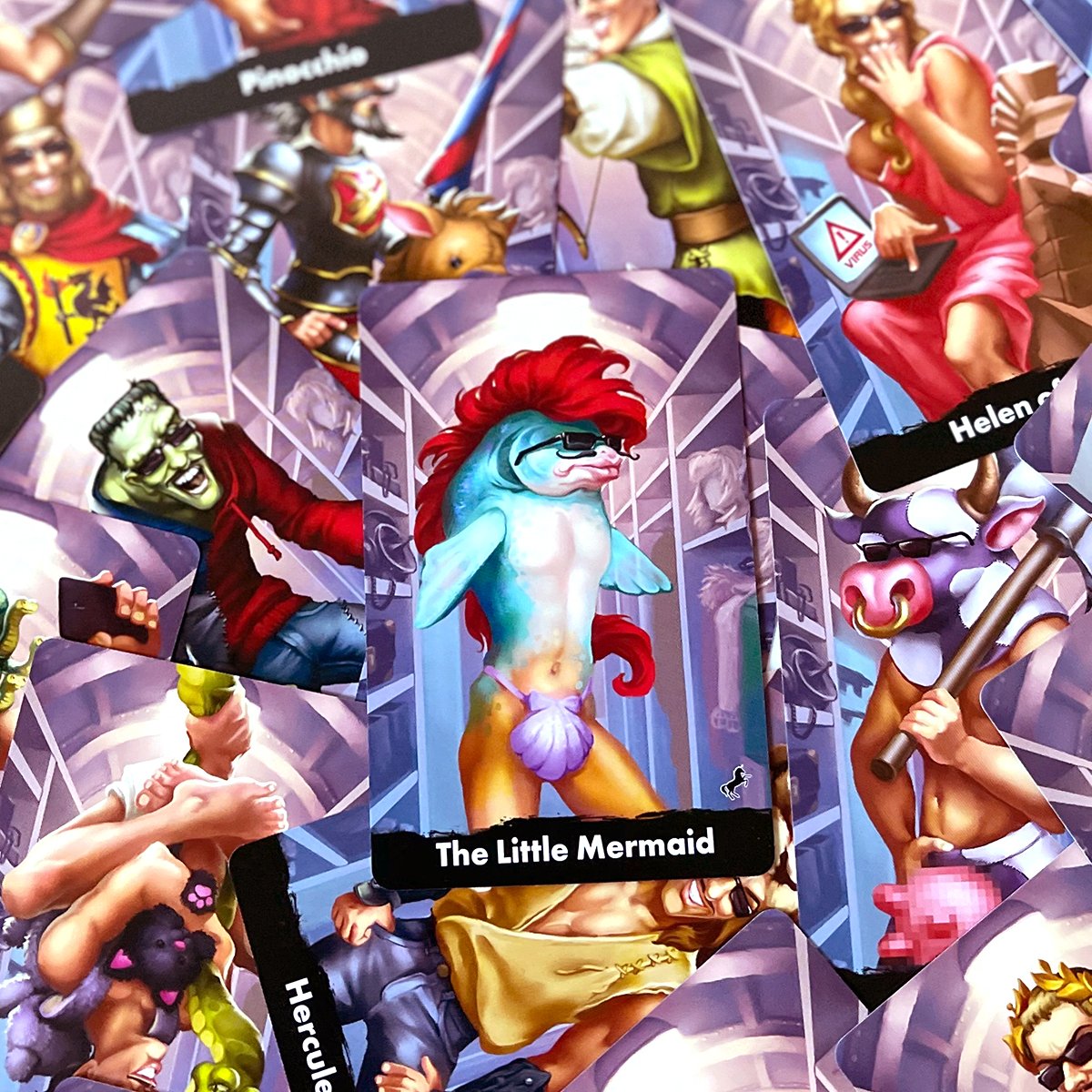 It seems to me that party games have to have something specific they tap into about human nature. They require such simple and streamlined rules to be accessible to a wide audience, so they accomplish this by appealing to our natural tendencies. For Wits & Wagers and Wavelength, it’s the inclination to debate and investigate, and those games provide really efficient vehicles to do just that. For the original Spyfall, it’s the tension of secrecy. It creates the atmosphere of games like The Resistance but it also requires players to be creative and quick on their feet. Uniquely, Spyfall is at its most hilarious when people screw up royally, which is actually when most deduction and party games fall apart. Spyfest doesn’t accomplish this, and doesn’t accomplish much else, either.

In Spyfest, one player on one of the teams has a secret role, and both sides are trying to guess the player’s identity from a list of possible candidates. The player’s own team knows a secret (separate, possibly unrelated) object that the spy also knows, and the spy can (desperately) try to use the object to make connections to the character. Like, a newspaper is a great clue about Helen of Troy, right? It can if you’re clever; this actually sounds like a cool challenge to me. 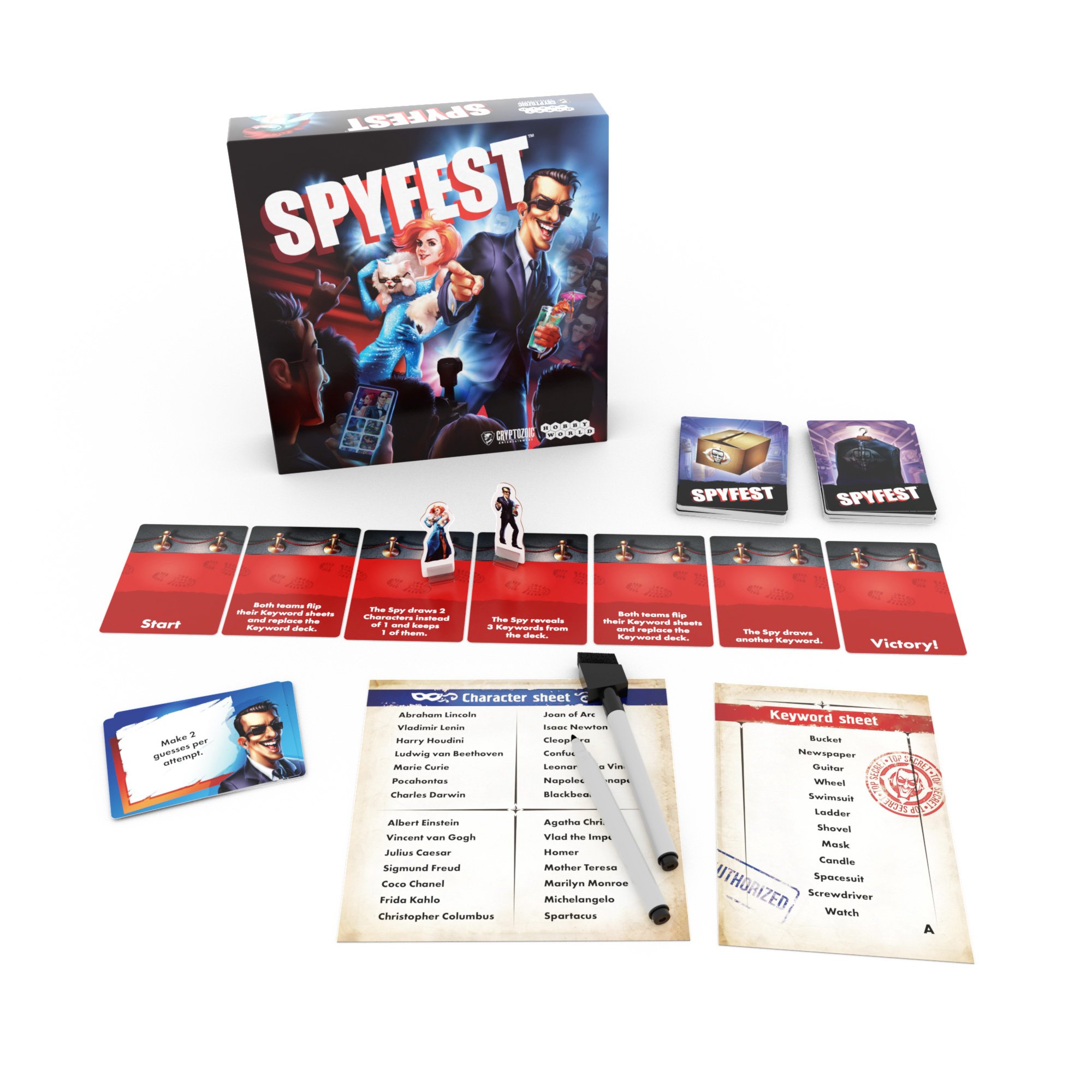 However, the structure set up around this guessing game is about the worst imaginable. While Spyfall kept things flowing with a timer and a real sense of danger (if no one catches the Spy in time, he wins!), if no one discovers the Spy in Spyfest, well, quite honestly the round was a waste of time and you move on to the next one (per the rules!). It seems to me the designer knew the concept needed work, and rather than refine the basics, he added, and added, and added. Each round has a unique rule to that round depending on the place of the player’s pawn. Each team has seven action cards they can use per game, which players have to awkwardly share among the whole team and remember to use at the right times. There are two different decks of spies. It’s just a lot, and while special rule-breaking powers are great for strategy card games, they’re too much to think about when you’re trying to beat the other time to the buzzer.

And while you’re thinking and worrying about all these effects and what the next move can be, what you hear is silence. Not the silence that stems from tension, knowing someone’s about to make a bold move or something could go wrong at any moment. Just awkward silence. The game rulebook even says that if the spy runs out of things to say to describe the character and they haven’t added new info for one minute, the round is over. They literally had to add two different rules about when to just give up on the game and try again.

Even if I got past the half-hearted rules, and I tried to dig into the psychologically and “strategy” of the action cards and special spaces on the red carpet, the biggest criticism awaits: I never laughed playing this game. Not once. Spyfall had me in tears with laughter, so I’ll go back to that instead.

Thank you to Cryptozoic Entertainment for providing a review copy of Spyfest.

Spyfest begins with a weak concept, and then tries to fix it by throwing in the kitchen sink, along with some toilet humor. It doesn't end well.