Take me out to the black, watch out for space orc attacks... 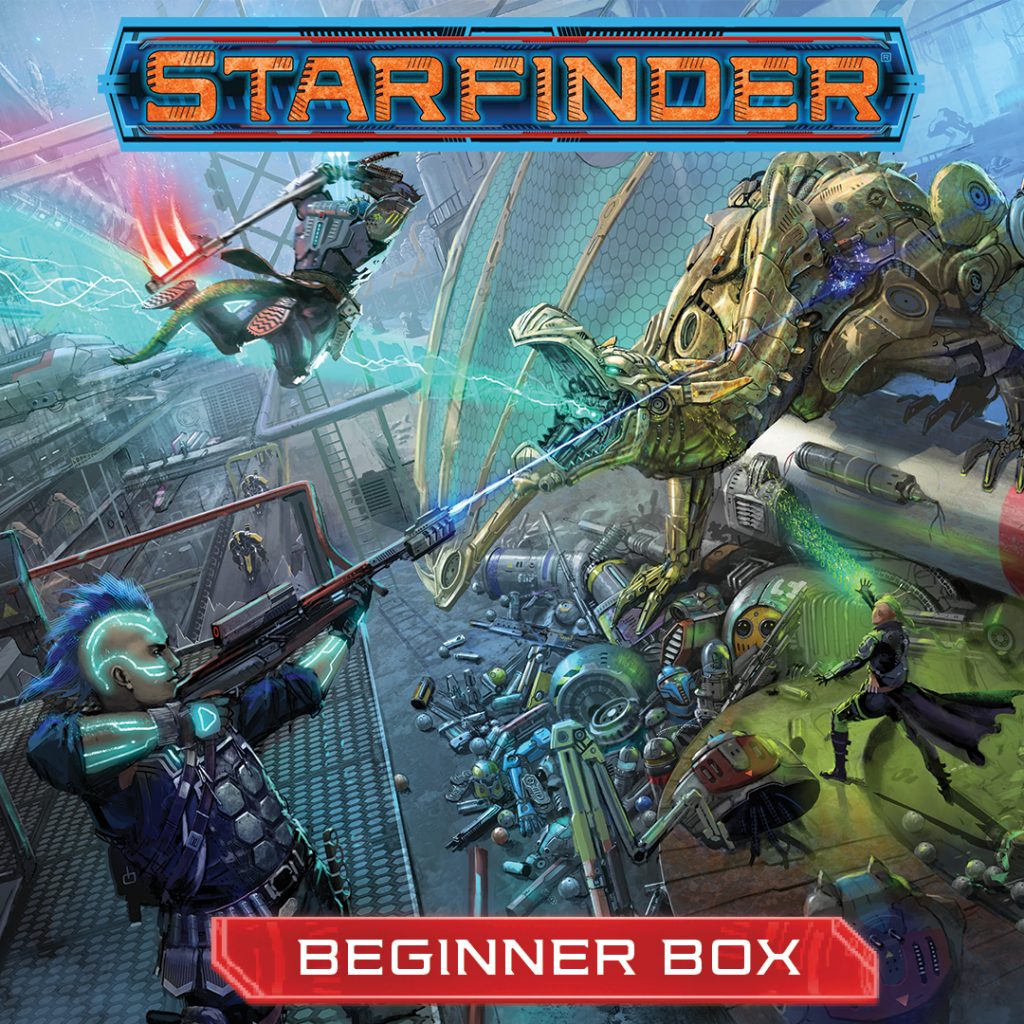 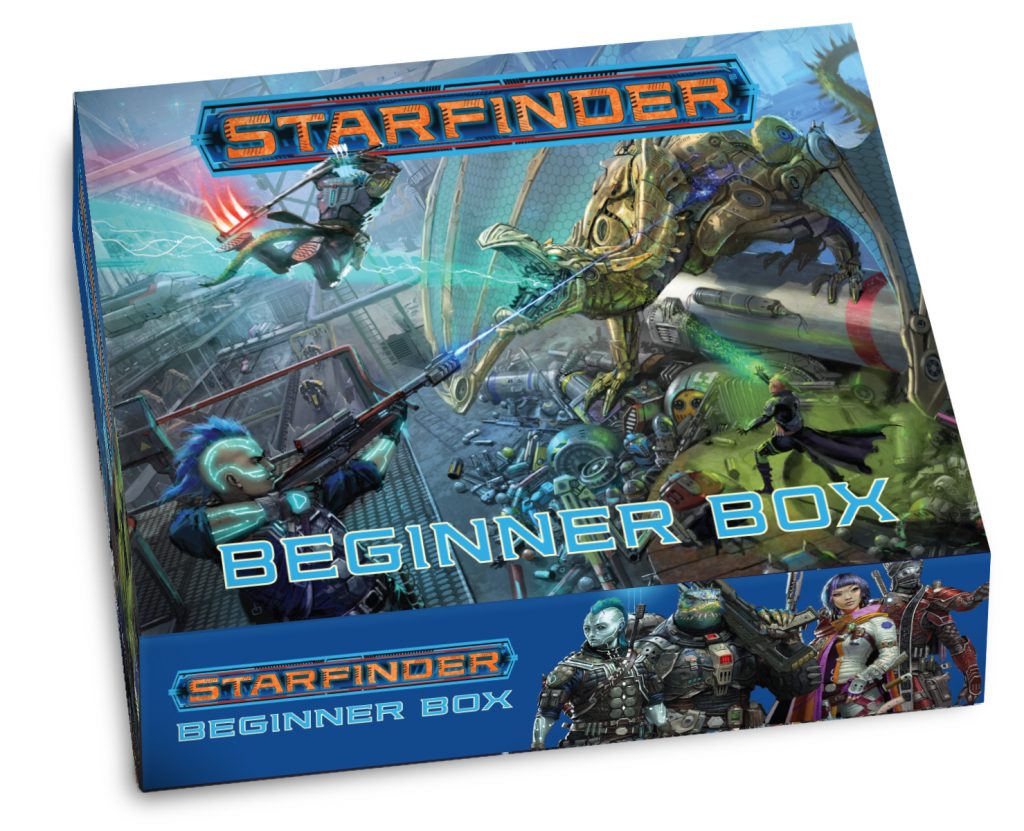 Starfinder takes Paizo’s Pathfinder IP and puts it into space, trading out straight fantasy for science-fiction fantasy – think Lord of the Rings meets Firefly and you’re on the right track. Players who haven’t touched a tabletop RPG before will do fine, but veterans of role-playing games will notice the subtle tweaks to pull the franchise into the far-flung future. The Starfinder Beginner Box gives you everything you’d need and more to play an introductory game, and dozens of more hours of gaming on top of that.

Starfinder contains many of the classic fantasy or science-fiction tropes of new, dangerous worlds possibly populated by potential friend or foe, both humanoid and animal. The back section of the game master’s guide has full-color pictures of many beasts and persons, and some of the art throughout depicts action scenes. Players may end up talking to, fighting, and or meeting some or all of the beings shown there.

Some way or another I’ve come into possession of a few different beginner boxes for various role-playing games and systems; this is my favorite so far. Starfinder gives you SO much stuff in its kits, including dice, cardboard minis, double-sided flip-mats, books, and (in this one) 6 pre-generated character sheets and 6 blank ones for if and when players want to build their own crew from the boots up. (If that race has boots.) It also comes with player aid cards, showing what players can do on one side and condition effects (flat-footed, staggered, impaired, etc.) on the other side.

I only have one major gripe so I’ll get it over with early: they kinda re-used the original Pathfinder beginner box story. Several of the enemies (starts with the players getting jumped by two goblins, ends with a dragon fight that can end with the dragon flying away) and situations are lifted straight from that box, which felt a little like cheating…but I can’t blame them for plagiarizing themselves. Starfinder is after all, going to always be what happened after Pathfinder, so you could also look at it as an homage. My players, who I’ve lead through both scenarios, didn’t remember the similarities, so take it with a grain of salt.

Speaking of players: if a player ends up in the Game Master’s chair for a game of Starfinder, and they are playing with folks who are used to a fantasy or superhero setting, they may need to be a bit gentle with them. The blending of a science-fiction setting with fantasy elements can be confusing or disorienting for some. For example, here’s some quotes from the game I ran of the Starfinder Beginner Box.

“Well it’s a box, so…no, you can’t telepathically communicate with it.”

“It’s a robot, so unless you’re a phone repairman from 1996 with a Macbook, no you can’t control it.”

(In response to, ‘When did we go into space?’) “Well, when you went through the airlock and had to make several checks to control your space-suit in space…that’s when.”  My days of not taking them seriously are definitely coming to a middle. 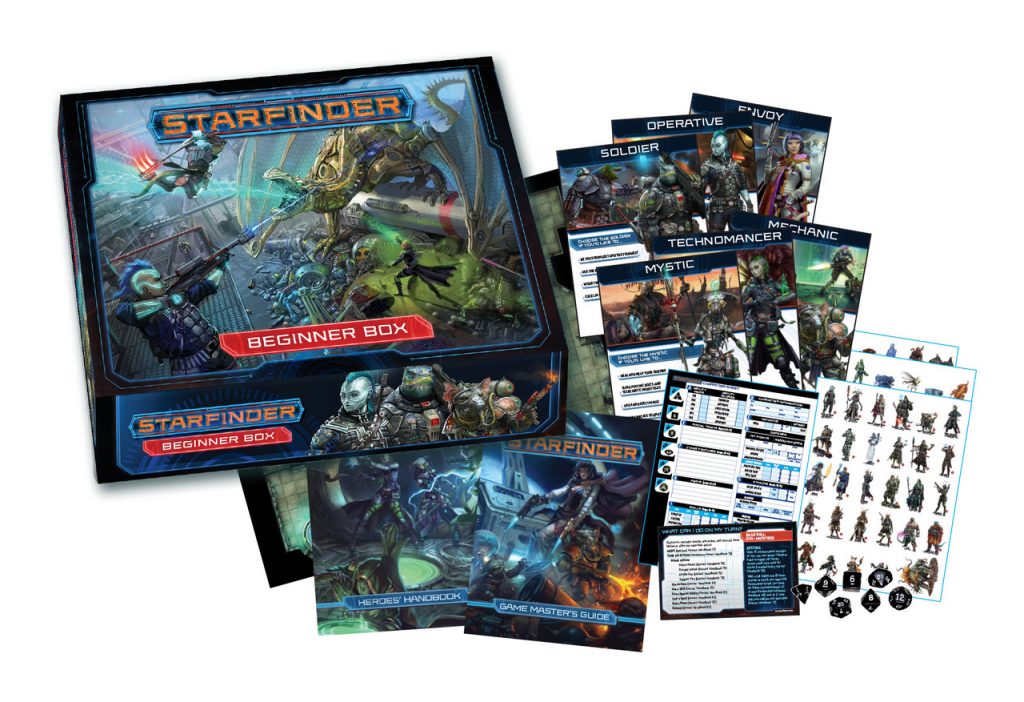 Part of this complete balanced breakfa- I mean, Beginner Box.

The dice are standard – solid-colors with slightly rounded corners – but I appreciate that the publisher included them, in case someone doesn’t bring any. The cardboard minis are nice, but I will say again that it’s annoying that the names get covered up by the plastic stands. I really like the two-sided flip-mat – the grey back side lets you draw or set up whatever encounter you’d like.

The two-page, pre-generated character sheets are really user friendly, and have sections labeled with large letters, so when that one player can’t find their initiative bonus for the life of them, you can tell them to just look under heading “C”. Also the pre-gen characters do a good job of explaining why players might like to play as that class, and what they’re good at.

Both the Heroes’ book and Game Master’s Guide have everything necessary to role-play until the wee hours of the night, from step-by-step character creation (or monster creation for GMs) to illustrated weapon and armor guides. It also has an extensive bestiary with pictures, which always helps me when I’m trying to describe a NPC or enemy.

If you ever watched The Fifth Element or Guardians of the Galaxy and wanted to play a game in a similar setting, you really should check out the Starfinder Beginner Box. It’s not hyperbole to say it has hours upon hours of play possible, because it really does. Check it out, and I don’t think you’ll be disappointed. See you, Space Cowboy.

A review copy was generously provided by Paizo. 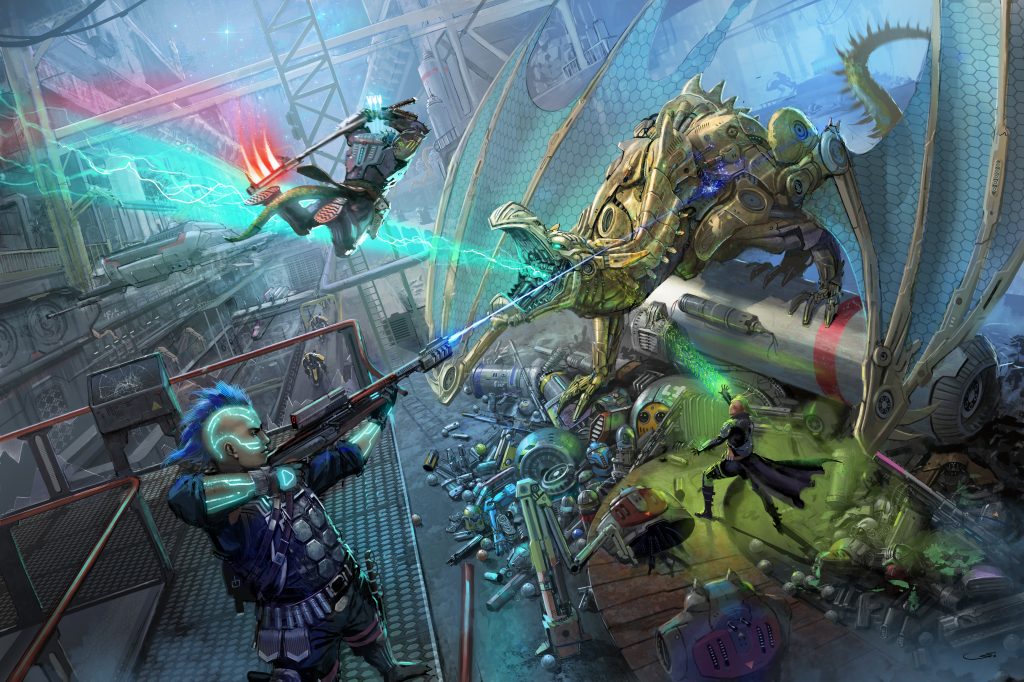 Did you get any of the pop-culture references in the review? Do you like role-playing games? Then you should consider checking out this box.