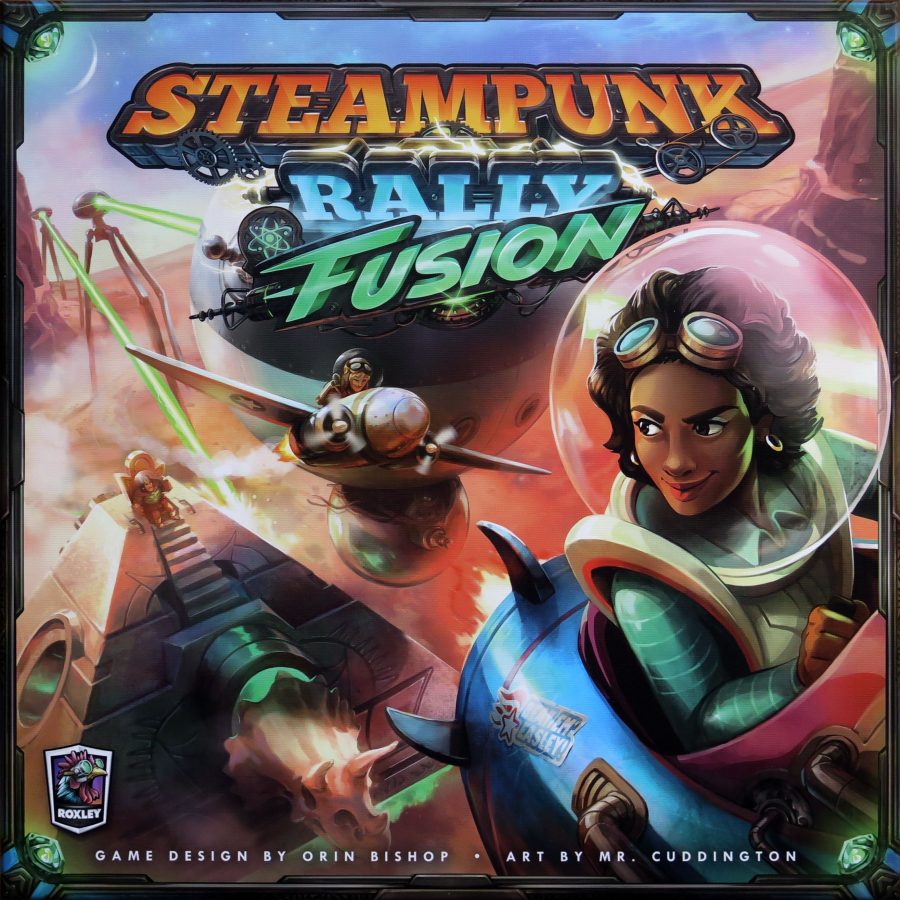 In 2015, Steampunk Rally was released as one of Roxley Games’ first titles. They quickly established themselves as an excellent publisher, with a beautiful game and a reasonable price point. The game was fun, too, which didn’t hurt. A wacky combination of card drafting, engine building, dice rolling, and racing, the game can seem a little intimidating at first but comes together to form a really intuitive, smooth, fun game. After Roxley hit success with other games like Santorini and Brass, I thought we would never see more Steampunk Rally, but here we are in 2021 with a brand new version of the game, fully integratable with the original. Steampunk Rally Fusion provides two new maps, new machine parts, new characters, new dice, new… everything. But is it as good as the original?

If you’ve played Steampunk Rally, you will likely feel exactly the same about Fusion as you do about the original. This is the same game with some new twists, but the core is very much the same. Therefore, I won’t focus too much on the core concepts; you can go to my original review for that. To summarize: I think the game takes a little bit of buy-in to learn, but it’s incredibly fun and clever, with a unique theme and great art and graphic design. It is an incredibly underrated game, in my opinion.

Instead of rehashing my original review, I’d like to focus on the various new concepts in Fusion and whether they actually improve the game. So let’s go through each new concept one at a time.

Steampunk Rally Fusion includes two new maps: Machu Picchu and Mars. Mars is an incredibly challenging track, with several spots that require players commit an extra move icon to enter (with the benefit of being able to remove a die at the end of the phase if you stay put). Likewise, the Tripod (Event) deck for Mars is full of negative events that punish players, though most give players an option (e.g. pay cogs or move backwards). Since the new draft decks don’t include a lot of cards that give smooth motion, this is an especially punishing map and I found that it bogged the game down quite a bit.

On the flip side, the Machu Picchu map is wonderful. The special spaces on the board require you to take damage or discard dice of an appropriate color, which is usually easily done and even planned for, since players can sell cards for dice during the draft. Additionally, the Event spaces are instead Artifact spaces, and players that end on those regions are given benefits, sometimes very strong ones. I always find positive effects that speed up the game and give it a bigger sense of “crazy” to be far more fun and interesting than mechanisms that punish players, so I would always choose to play on this map. I also think I like it more than either of the original maps for Steampunk Rally.

A note about the Tripod/Artifact decks: they’re awkwardly explained together in the rulebook, which led to some major confusion before our first game (which was on Mars), because they’re handled differently on each map. Furthermore, the definition of “red space” for Mars was contradictory; the rulebook indicated that the blue-red lava-looking spaces also count, despite not having the Tripod icons directly on them. I admit I already knew how to play Steampunk Rally, but I found the rulebook to be excellent with a great FAQ section, with this one exception. I hope later reprints better clarify how the event decks work. Also, so that I am completely clear, you can play either map without the associated decks, though I don’t know why you’d play Machu Picchu without the goodies.

Steampunk Rally Fusion also comes with entirely new Boost, Copper, Silver, and Gold decks to draft from, which can be mixed with the original cards from Steampunk Rally. The meat of the changes are here, as there are quite a few effects on these cards, and there are three big ones in particular.

Overcharge: Some cards let you discard them directly from your machine after activiation for a one-time bonus, quite often extra motion. It’s very reminiscient of the ability to scrap cards from play in Star Realms. This such an intuitive, easy inclusion yet it adds some extra layers of strategy and can make for even crazier turns. I absolutely love this.

Gear Up: Some cards allow players to put a certain number (card-specific) of cogs on a machine part to “upgrade” its activation ability. For example, maybe an ability that gives two dice would also give a heart icon if 3 cogs are laid on the card. The cogs are stuck on the card, but are returned if the machine part is destroyed. I think this is interesting, but cogs are always useful, so this isn’t really providing a new decision space for an otherwise sometimes-useless item; this is stretching the most useful resource in the game to its limit. I don’t actively dislike its inclusion, but it didn’t grab me.

Fusion Dice: The name of the game comes from these giant (well, regular-sized; the other dice are tiny) dice that have sides ranging from values of 4 to 9 rather than 1 to 6. The downside? They can never be removed from a machine part! This leads to some serious risk-reward decisions, but it also brilliantly weaves into other mechanisms without adding rules: maybe I want to take damage this round and just lose this now-useless machine part, or maybe I very wisely use my Fusion Dice on a machine part with an Overcharge ability, and then send it packing. Some of the other players thought the values should be even higher for having such a downside, but I’m not sure that’s right or that it even matters – they’re fun, enticing, and not game-breaking. And they look cool. A fantastic addition.

Other comments: These are not about particular mechanisms, just about some of the cards. I thought the new special effects on the Copper machine parts were a lot of fun and particularly tantalizing. The new Boost cards were interesting but seemed to vary wildly in usefulness and complexity. Going forward, if I play with both decks mixed together, I think I would just remove a few Boost cards I find less appealing and have a slightly smaller (but still huge) deck of cards.

Secret Projects: This is a new optional inclusion where players are given a card at the start of the game that has an ability with three different levels. Players “power up” the ability by committing “runs” of unused dice to the project each race phase. Once per game, it can be revealed for a powerful ability, dependent on how many dice were committed to it. This is a great addition, because committing dice (especially low-valued dice) to this instead of simply wasting them (as happens ocassionally) feels so much better, and sometimes there were deliciously tough decisions about whether to move on the track or commit heavily to the secret project. I wouldn’t include this in a first game, but I would always use it with experienced players.

New Inventors: I have not played with all of them, but I found many of the new inventors to be unique and interesting, while still being balanced and easy to understand. Some of them have new mechanisms like Fusion Dice built right into the cockpit parts, which means you can get to the new concepts right away. If you’re combining this with Steampunk Rally or promo cards, there’s an astounding number of Inventors to choose from, and the cast is pretty diverse. I also greatly appreciated that the cover features a female minority character.

Rules: The rulebook includes a thematic setup, biographies of each inventors, and a nice rules summary (in addition to the rules summary cards). There’s also a beginner setup for younger plays that makes a lot of sense, and I hope I can use those to introduce my 7-year-old daughter to the game. Other than the event decks, we found just about everything we needed in the rulebook, and the FAQ section did a great job anticipating questions. Roxley knocked it out of the park yet again with the little details.

Atomic Edition: The hard part about advertising the Atomic Edition is that it is likely an “all in” on two versions of a game you don’t own, unless you’re going to get rid of your original copy of Steampunk Rally. That makes it hard to recommend if you’ve never played either game, since $75 is a lot for “one” game (though it’s really two). It is definitely the best version of the game out there, though, so it may be worth the commitment if you think you will enjoy the game, or maybe you played it as a friend’s house. I would love to see this game on BoardGameArena, and that would maybe make it an easier sell: you’ve tried it online, you know you like it, so get the fancy version. As “deluxe” editions go, this one is incredibly practical and reasonably priced, while still being awesome.

I’ve always found Steampunk Rally to be an excellent game, and Steampunk Rally Fusion enhances the formula without ruining it. I don’t like every single item in Fusion, but there’s enough awesome stuff that I might even recommend it over the original for advanced players. Or save yourself the tough decision and get the Atomic Edition. But one way or another, anyone who enjoys thematic, advanced strategy games should be checking this one out.

Thank you to Roxley Games for providing a review copy of Steampunk Rally Fusion Atomic Edition.

Steampunk Rally Fusion is the same game, but bigger and better. If you own neither game, the Atomic Edition is the best way to get both of these great games.