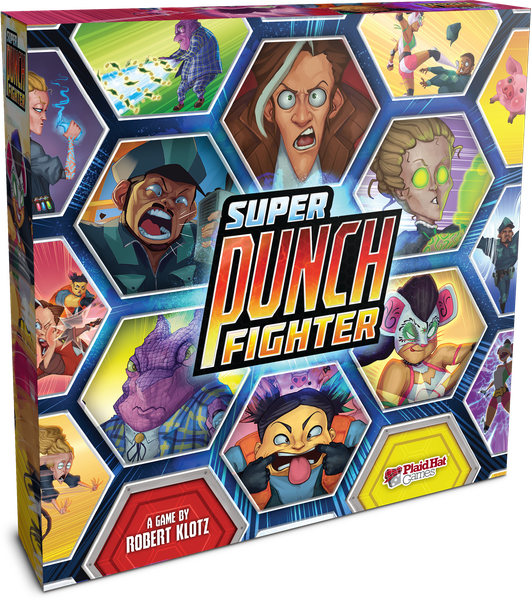 Players attack each other with various moves; no blood is shown. Think Looney Tunes level of violence.

One character is like a female Dr. Jekyll with a little bit of Nikola Tesla thrown in, and uses science and magic to attack.

One character is a female luchador, and while her clothing isn’t revealing, it is skin-tight.

Super Punch Fighter is an arena combat game that wears its video game influences boldly, which is great because that’s the best thing it has going for itself. The art is great, and players are given many choices each time their turn comes up, but overall this is not a game I’d want to keep sinking quarters into. Let me explain how the game works and it might make more sense.

Players start by picking one of six fighters: Khan Queso, a mouse-themed lady luchador; Business Lizard, who is some kind of cutthroat alien tycoon; Mad Hogger, who is a pig farmer who loves her swine; Dr. Curium, who is Dr. Jekyll/Nikolai Tesla; Tchotchke, who is an uber-nerd; and Security Officer Steve, who is a law enforcement officer of some degree (I hesitate to say mall cop due to his weapons). The characters are wildly different in appearance, race, age, and size, and I just wish that their abilities followed suit. In the end it didn’t really feel like it mattered which characters players chose other than their appearance. Every fighter has similar abilities that are just named something else – it’s not like Smash-Up (which the art reminded me of) where certain groups are better at a particular thing. Everyone is zany and weird and good at fighting.

Each player starts with 2 Fighter Cards, which help them launch combos, and 4 button cards, A through D. A player’s turn consists of Revive, Power Up, Action, Reset, and Discard. Revive is for the first turn and any subsequent turn after a character has been Knocked Out. A knocked-out player simply chooses a spawn point on the board and places their character on a space next to it. Power Up is used if a fighter is standing on a yellow or red spot at the start of their turn; these two spaces let them draw 1 or 2 cards (Fighter or Button cards) immediately. Action lets them choose one thing to do between Move (4 spaces), Draw (Any 2 cards), or Launch a combo (with a Fighter card). Once a player has launched a combo, they may continue to play extra Fighter cards as long as they have the required buttons to push to power them. They also don’t have to pay the cost of the first button on their second combo card if it matches the last button of their last played combo card. The example from the rulebook explains that if Khan Queso wanted to play “Sleeper Hold” (B button) then “Drop Kick” (B and C buttons) then “Chop” (C and A buttons) she would only have to press B, C, and A.

Besides combos, players can also push any of the buttons as a free action, as long as they don’t already have a thumb token on them (indicating that they’ve already been pressed this round). They then Reset, which means they can remove a thumb token from up to 4 button cards in their play area, and Discard any button cards that are still “pressed” (still have thumb tokens on them).

Between the meta-control cabinet feel and the achievements players can earn for more stars, Super Punch Fighter is trying hard to be a modern take on the classic arcade beat ’em up cabinet. This is fine, except it ends up being somewhat boring when all players do outside their turn is occasionally block an attack if they have a B button available. The game also comes with a “Minion Rush” mode for playing with 1-2 players, and while this was a lot more enjoyable since there were a lot more targets on the board, both modes just felt like taking turns slugging each other with little to no recourse or ability to do anything on other players’ turns. Often, I would use up all my B buttons trying to soak up damage, only to realize I needed them for my combos on my turn and was unable to do anything about it.

Super Punch Fighter has a lot going for it – I like the art, and the button pushing and recovery mechanic is a nice idea. A player can pull off an impressive combo plus extra buttons that they have left, but they will likely be vulnerable or low on buttons next turn. Overall however it just didn’t resonate with me – it’s either too complicated for the quick, silly fighting game it looks like on the surface or it’s not tactical enough for the button-pushing video game simulation that it seems like once you start playing. In the end I’d have to say if you want a silly fighting game I would steer you towards either Smash-Up or Dragon Punch, both which have great art, unique fighters, and engaging mechanics to boot.

A review copy was provided by Plaid Hat games.

They tried really hard with Super Punch Fighter to make a game that was evocative of arcade games of old, while pulling some things from more recent video games (such as achievements). It just didn't all quite come together, and feels a bit like they're trying too hard.