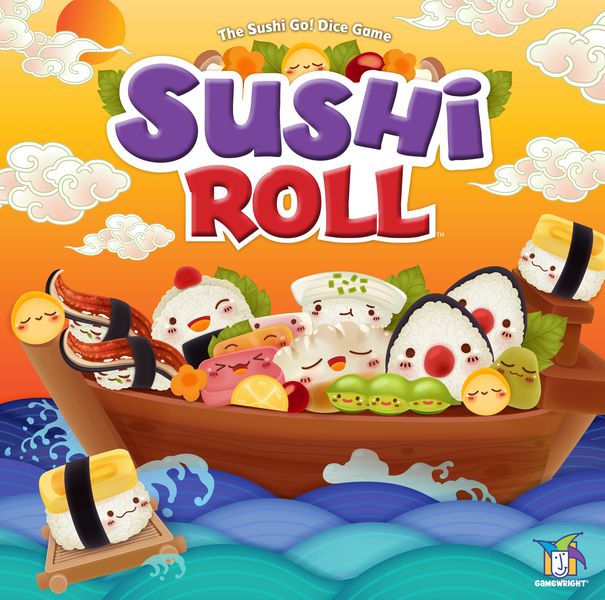 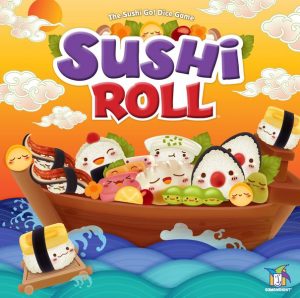 Sushi Roll is the latest entry in the extremely-popular Sushi Go series. It will feel familiar to anyone who has played the original game, but it introduces a new element of randomness that changes its feel slightly. It is a great family game for all ages.

If you know how to play Sushi Go, you basically know how to play its newest relative, Sushi Roll, as well. Sushi Roll is a lightning-fast drafting game that uses the familiar pick-and-pass mechanism. This time, however, the game comes with colorful, engraved dice rather than cards.

Each player begins with a “tray” board, which acts as both a player aid and personal tableau. Trays give a breakdown of the die faces and show how each type of result is scored. 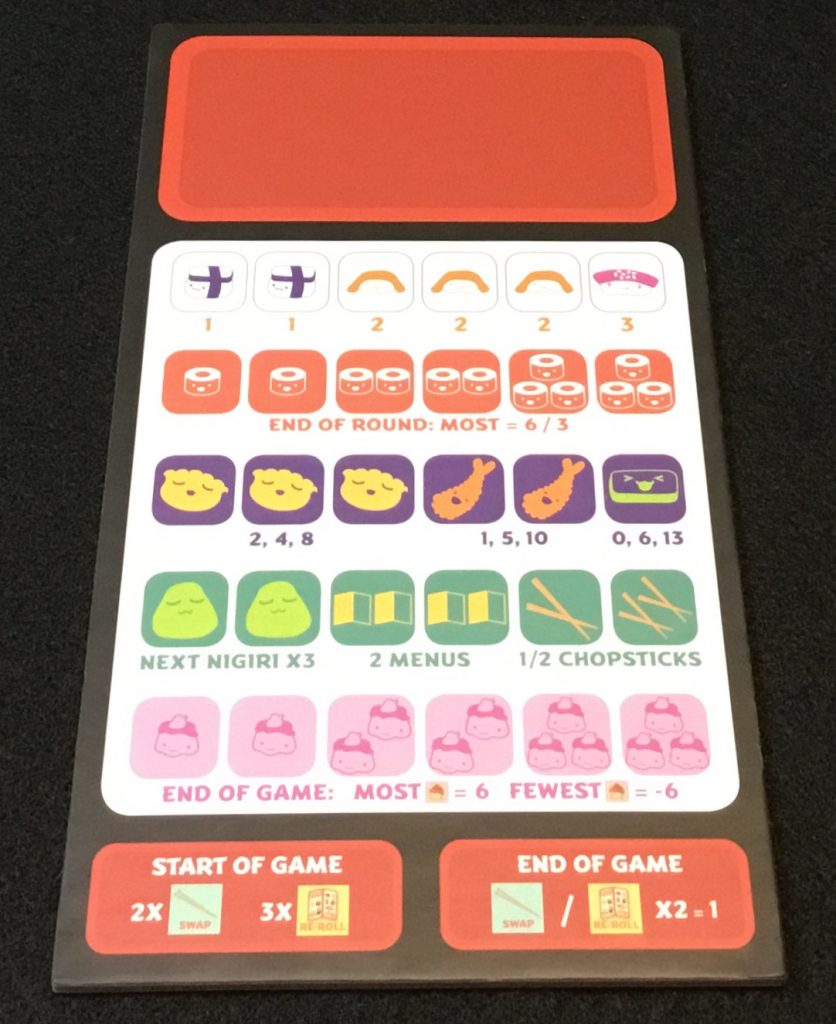 Everyone also receives a “conveyor belt” tile, where dice are placed as they move from player to player. Each turn, players roll their dice, choose one to place on their tray, and pass the rest to their neighbor on the conveyor belt. 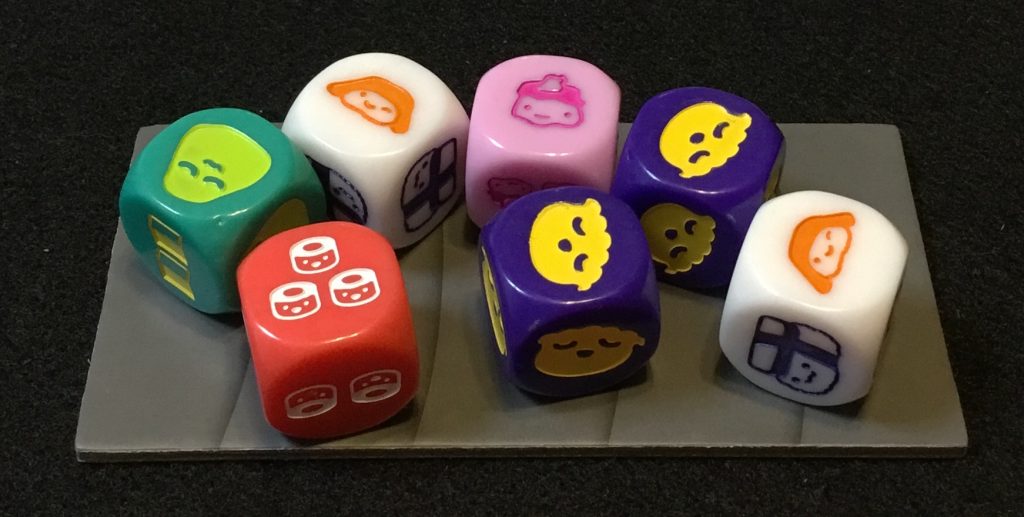 As players draft dice, they are stored in the red area area at the top of the tray. Remaining dice are then passed. The receiving player then rolls them, selects one, passes them, and so on. 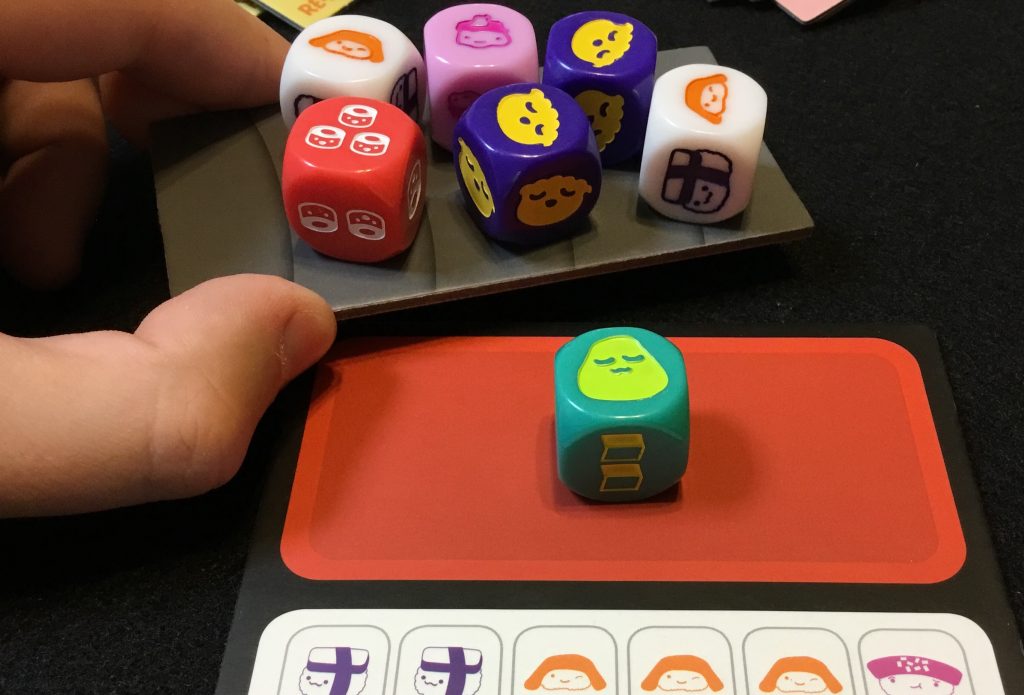 From his dice pool, this player takes a wasabi and passes the remaining dice to his neighbor.

When the last dice has been drafted, players determine their score for the round. 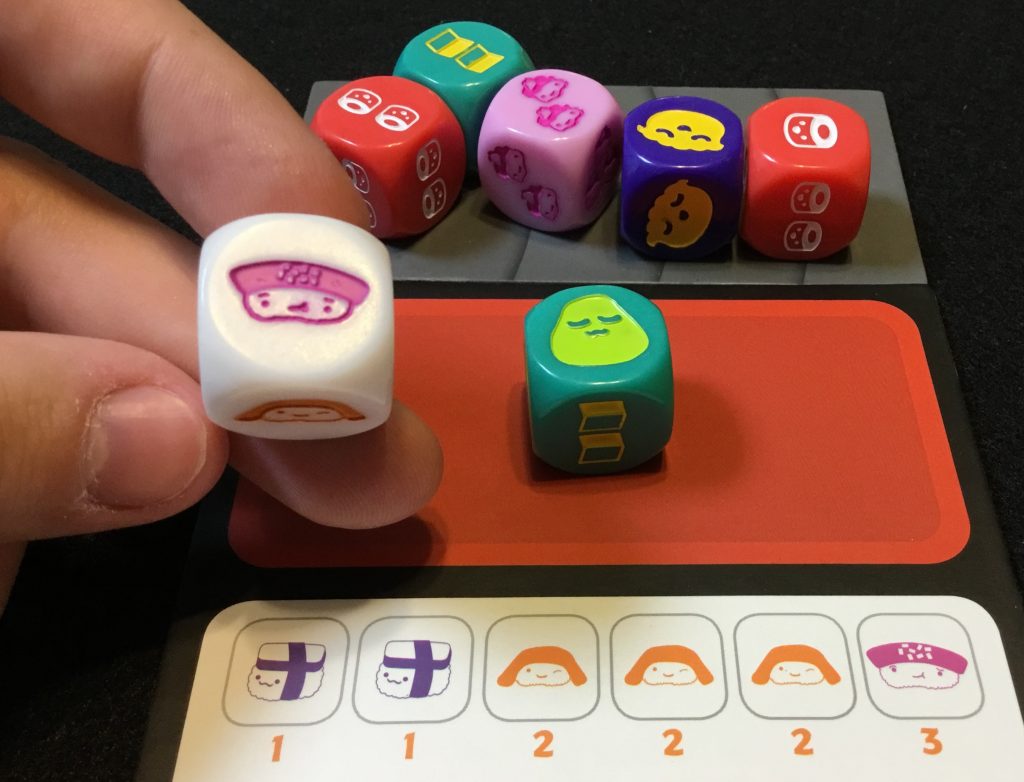 He then rolls the new dice he received from his neighbor. Choosing the 3-point nigiri result, he adds it to the wasabi to triple its value! 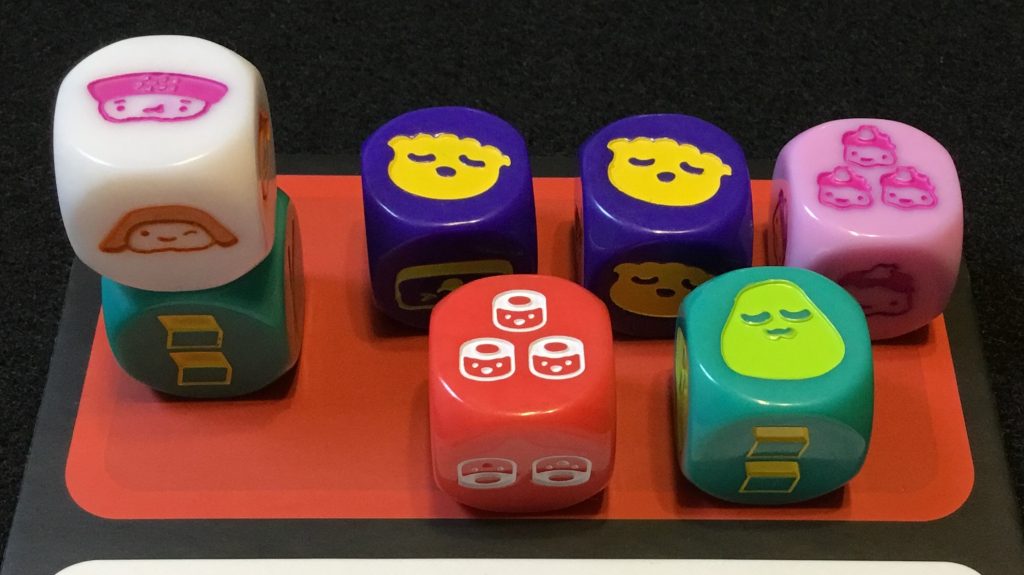 An example of dice collected in a round. The nigiri is stacked on a wasabi, to indicate that it is tripled in value. The other wasabi is wasted, because it has no nigiri.

After players have completed three rounds, they tally their final scores. Every two remaining menu or chopstick tokens are worth a point, and the player with the highest score wins.

Sushi Roll feels like the perfect dice-version reimagining of the original Sushi Go. It retains all the fun of the original, while infusing it with a pleasing, tactile nature. The components and production are top-notch, with great artwork and iconography. Of course, the real showstoppers are the big, chunky dice, which are an absolute delight to play with. 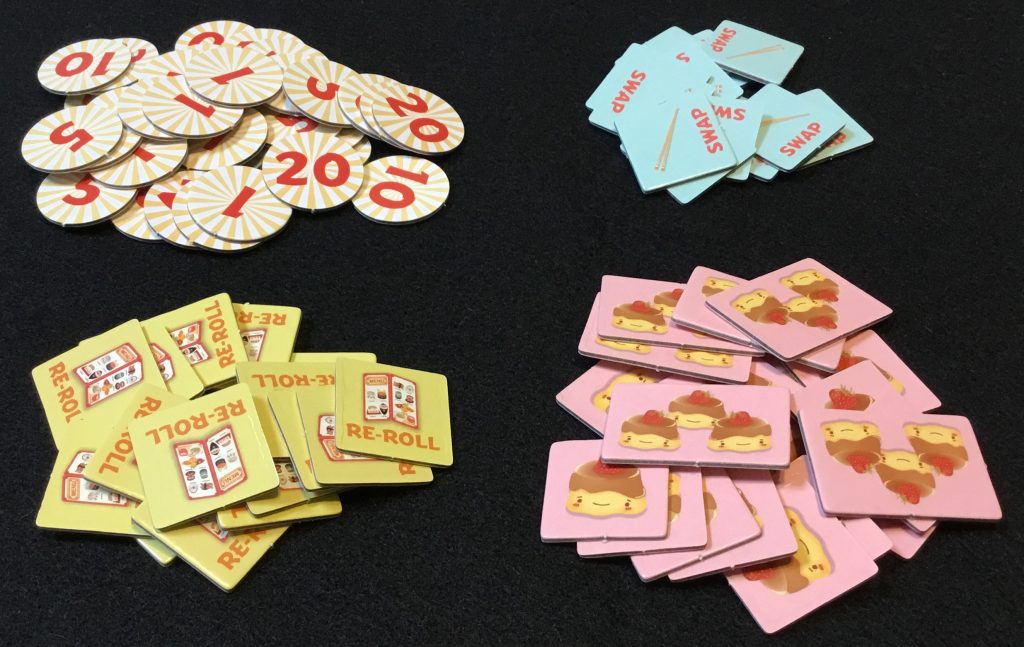 There are a couple of notable differences between Sushi Go and Sushi Roll.

First, Sushi Roll has a turn order. Unlike the original card game, in which all players act simultaneously, the new one operates one player at a time—Player A selects a die, then Player B selects a die, etc. This difference is negligible, but it adds the interesting fact that later players can see what dice their opponents took and play accordingly. Since all dice are visible at all times, players know exactly what dice are still up for grabs. If the last available nigiri die was just taken, for example, it would not make sense for someone to take a wasabi, since there are no more nigiri to make it pay off.

The other, more significant, difference is that Sushi Roll introduces an element of random chance. The original game has no “surprises,” in the sense that players always know exactly what cards (and therefore, what choices) they are giving to their neighbors. If a player gives his neighbor a single pudding card on the last pass, he can be certain that she will gain exactly one pudding, no more and no less.

The addition of dice randomness removes this certainty. Unlike passing a pudding card, if the player hands his neighbor a pudding die on the last pass, she could earn one, two, or even three pudding, depending upon the result of her roll. Whether this change is good or bad will largely depend on personal taste. I can honestly say I really like both systems for different reasons: the card system feels more “pure” because things can be known for sure, but the dice system is fun because it is unpredictable.

It’s tough to say which of these games I enjoy more. (FYI, I have never played Sushi Go Party, so I can’t make any comparisons there.) Both the card and dice versions have their merits, and I think fans of one will probably enjoy the other, as well. That being said, I’m not sure these games are different enough to warrant having both. My advice is to get Sushi Roll if you like games with just a touch of randomness, and to get Sushi Go if you like games that offer more control.

Either way, you can’t go wrong with this great series.

Sushi Roll is a fun dice version of Sushi Go. It looks great and it plays great. Recommended.