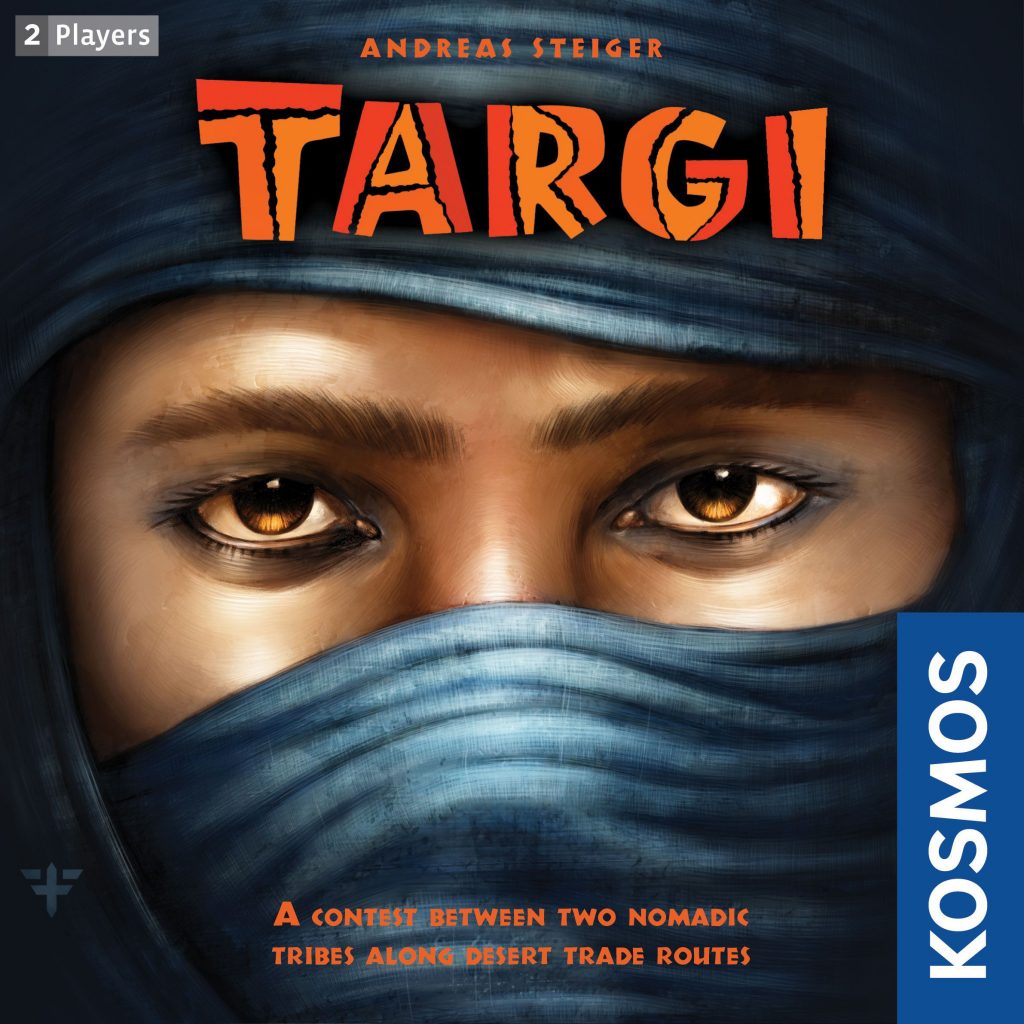 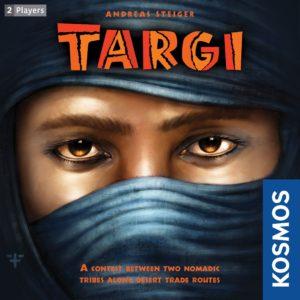 One of the things games publisher Kosmos is best known for is its series of two-player games, all in the same small square box. Perhaps best known among these is Lost Cities, but Targi should not be close behind. To my knowledge, it is the only two-player game ever nominated for Germany’s Kennerspiel des Jahres (Advanced Game of the Year) award. After changing hands for U.S. publication, it is back in print, with an expansion eventually on the way. But is the game truly award-worthy? Let’s find out!

While the game technically has a theme—Targi people, who live in the Sahara desert, vying over resources—gameplay is completely abstract and has no offensive content. 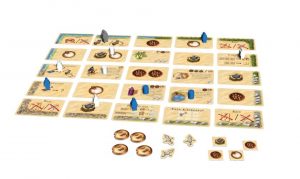 Don’t let Targi’s size and components fool you. Yes, the components are drab and and look as boring as the box cover. Yes, it’s small and unassuming. However, this is a big game in a small box.

Targi is a classic Eurogame—simple rules, minimal theme, a tiny dose of luck, and a heavy emphasis on strategy. Think back to Kramer, Kiesling, and Knizia games from the nineties. Targi is a spin on worker placement, where the spaces for each worker surround a 4-by-4 grid. How do you gain the actions in the middle of the grid, though? Imagine that two lines are extending from your workers, and where they intersect (if they do), you get that action as well. Since each player has three workers per round, you can get up to two bonus actions (sometimes less).

This mechanism has a number of implications. First, it’s simple and efficient, yet new and interesting. Since Targi‘s release in 2012, it has even been imitated (poorly) in 2016’s Quadropolis. The other implication is that it is cutthroat As soon as you place a worker, you are telegraphing which middle spaces you would like to get, and your opponent can block you out of them by taking the appropriate space with his own worker. On top of that, the game has spaces that demand payment in resources or points; it is a tight dance right up until the end. If you enjoy tense and competitive games that come down to the wire, this game has that feeling in spades.

That brings me to the two small issues Targi has. The first is that the game is just a hair too long. It’s a constant, deep mental investment if you want to play well, not a game to relax and talk over. That’s hard to keep up for 60-70 minutes; I’d prefer if the game was 8-10 rounds instead of 12. And of course, there’s the theme that I’ve hardly mentioned, because it’s virtually non-existent. Like many other Eurogames, you are trading resources for points and collecting sets. At least here, the resources are somewhat unique (salt, pepper, dates), but that’s it.

But, you know, the gameplay here is so good that I don’t care. This is a wonderful, deep strategy game with high replay value. And while it’s a game you might hold onto forever, long forgetting how much you paid, it’s still worth mentioning that this new edition has a retail price under twenty bucks. Since Kosmos doesn’t price fix, you can find it online for under fourteen dollars. Given that strategy game prices keep rising, there is literally no better board game out there at this price. The opportunity cost is so low that every board gamer should pick this one up.

Thank you to Thames and Kosmos for providing a review copy of Targi.

Right now, there is no better strategy board game available for under twenty dollars. Targi is an automatic recommendation for anyone looking for a 2-player strategy game.