Review – The Adventures of Robin Hood 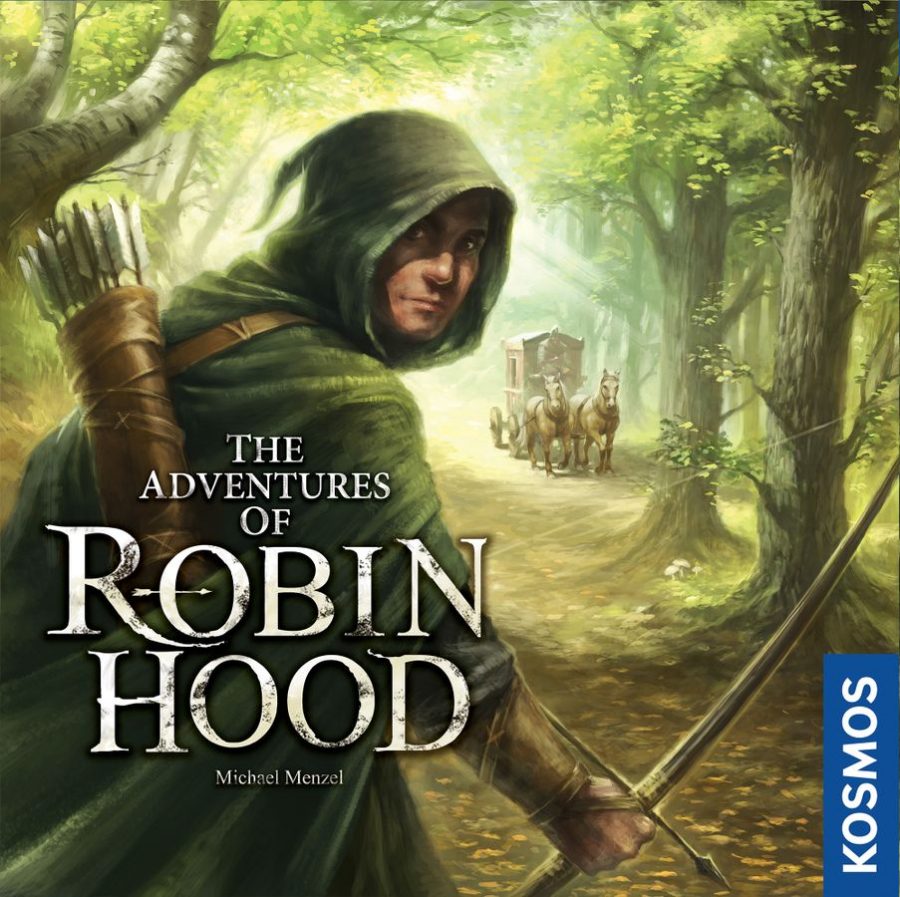 The Adventures of Robin Hood is a new game from Michael Menzel, designer of the acclaimed Andor series. This cooperative adventure puts players in the roles of Robin Hood, Little John, Maid Marian, and Will Scarlet as they journey through Sherwood Forest. Ready for some fantasy swashbuckling?

Right out of the box, The Adventures of Robin Hood roped me in. It wasn’t because of the game’s visuals (which are stunning), nor was it because of its theme (which is timeless), it was because it’s one of those “dive right in” games.

Whereas most hobby games involve a great deal of prep time (reading rulebooks, watching tutorial videos, etc.), the Robin Hood game box greets players with a single 2-sided sheet of setup and movement rules and says “Go!” Within minutes of removing the shrink wrap, players will already be in the action.

This game is scenario-based, and it uses a very cool, very innovative movement mechanism. The board does not have traditional spaces, but rather players move based on the physical length of their character pieces. Each player has 5 pieces: 2 standing figures, 2 walking figures (longer), and 1 running figure (longest). To move about the board, players use their standing figures as the starting and ending points; the walking and running figures connect them and dictate how far the player can go. As an example of how movement might work:

Here, Maid Marian used a running and a walking figure to move; the 2 standing figures mark the beginning and end of her movement. If she had wanted to go farther, she could have also used her second walking figure.

Players have an incentive to not spend their full movement allowance each turn, however. If a player does not use their running figure (thematically, saving their energy), they gain a bonus that can help during future encounters.

Robin Hood also uses a dynamic board with a unique “advent calendar”-type system of revealing hidden features. As players progress through the scenarios, they will punch out and flip the doors on the board, which may contain merchants, guards, townspeople, etc. This mechanism acts as sort of “save state,” since the board “remembers” which features players have visited.

Board features often correspond to entries in the game book. And speaking of the book:

This beautiful tome drives the narrative of the game. (It also teaches the rules during the introductory scenario!) Inside are a plethora of encounters, references, etc., that help to immerse players in the game-world.

Now, there is quite a bit more that I could include in this overview (I realize I have given little information about how the game actually plays), but to keep this review to a reasonable length, I’m glossing over some things to move onto my final thoughts.

The Adventures of Robin Hood is a bold game that innovates a lot. It is clear that it was a labor of love for designer Michael Menzel, and I think it was a worthy nominee of the 2021 Spiel des Jahres. This game feels grandiose, both literally and figuratively—literally, because the map is humongous, and figuratively, because playing this game feels like embarking on a daring fantasy adventure. (The very presence of the book helps to elicit that feeling.)

Robin Hood has a strong “narrative first” mentality. For me, this is a major plus, since I love story/theme-heavy games, but I know they are not everyone’s thing. For this reason, it is important for players to know what they are getting into before purchasing this game. Likewise, the movement mechanism, while innovative, has the potential to be a bit loose. Sometimes, players have to “eyeball it” when determining if they can reach something; sometimes the figures get bumped slightly when plotting movement; it is not an exact science. I don’t mind this personally, but I know some folks really dislike this kind of thing.

The production of Robin Hood looks great. The visuals are striking, the book is beautifully produced, and the components are colorful and tactile. It’s all very evocative, and it brings the theme to life. There have been some discussions online about the longevity of the board punch-outs and the wear and tear they endure during play. I can see this being an issue in the long term, but if players are really concerned, they can simply rest the tokens on top of their slots during gameplay, and only push them in when putting the game away.

I really admire The Adventures of Robin Hood, both from a design and an experience standpoint. This game tries things I have not seen before and (mostly) succeeds at weaving them together into something fresh and different. With a strong focus on narrative, it vivifies the Robin Hood lore and creates a thematic atmosphere for players. If that sounds like your thing, give this game a try.

This game tries things I have not seen before and (mostly) succeeds at weaving them together into something fresh and different. With a strong focus on narrative, it vivifies the Robin Hood lore and creates a thematic atmosphere for players.