You gotta fight for your right...to eaaaaat 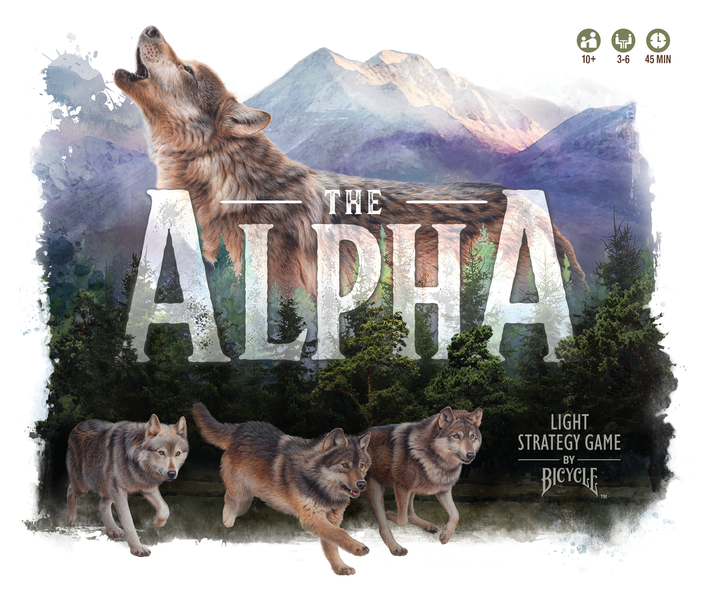 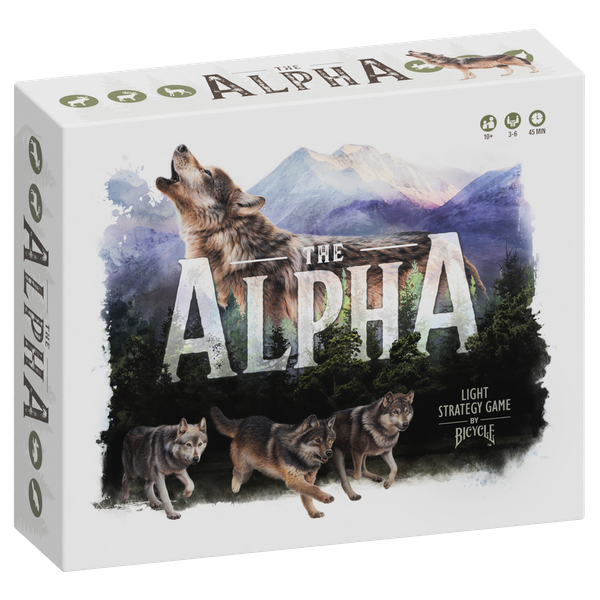 The Alpha sees 3-6 players each trying to be the dominant wolf pack as everyone vies for control of different food sources. Players will place their wolf meeples and try to have the most present at a given source, or if they tie they will have the option to share or fight over the spoils. Is it a howling good time or more of a yip-yap? Read on for our review.

Players will be controlling wolves fighting over food. If a wolf tries to get livestock, there is a good chance they will be killed and removed from the game. Food sources can become carrion for one round, showing bones and semi-decayed flesh. However, no blood is shown. 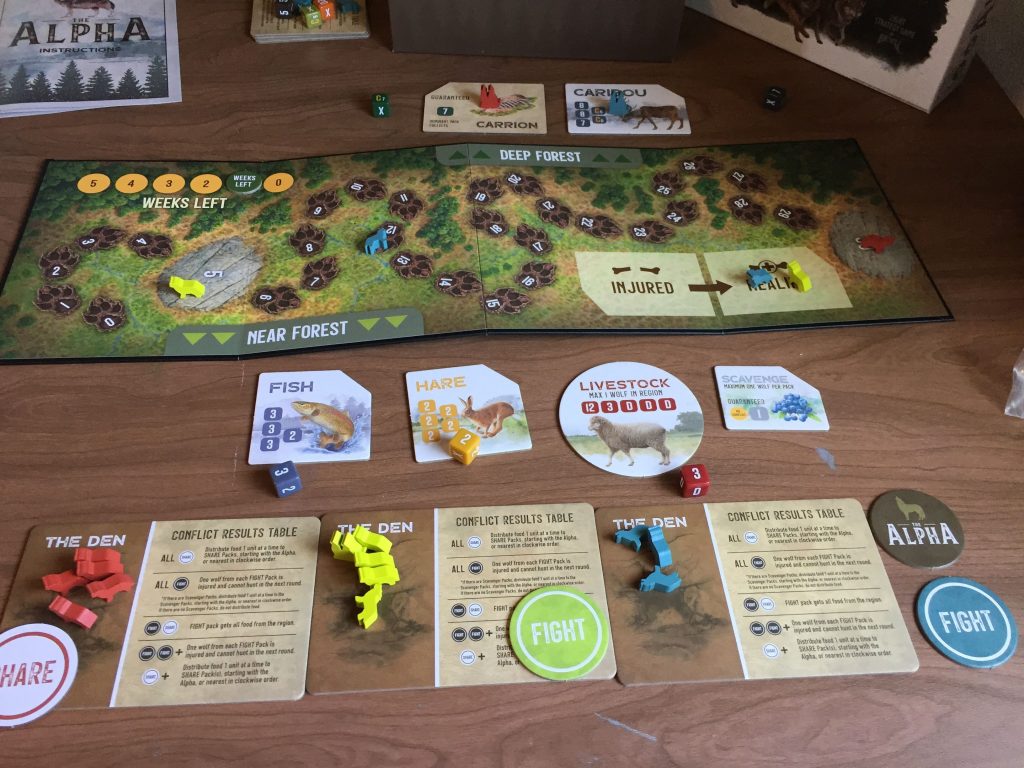 On paper, The Alpha sounds like a fun game – placing your wolves on the various food sources, vying for position, and trying to end up with the most wolves so you have a shot at getting all the food. Anytime multiple packs are tied for being the dominant pack (having the most at a given source) players have to resolve who gets the food. Each player tied for dominant pack must secretly choose either “Fight” or “Share” on their conflict tile. If only 1 player chose “Fight,” then they get all the food. If 2 or more choose “Fight,” but another chooses “Share,” the quarrelsome wolf packs each get injured and the more amicable pack gets all the food. If everyone picks “Share,” they share the food equally. 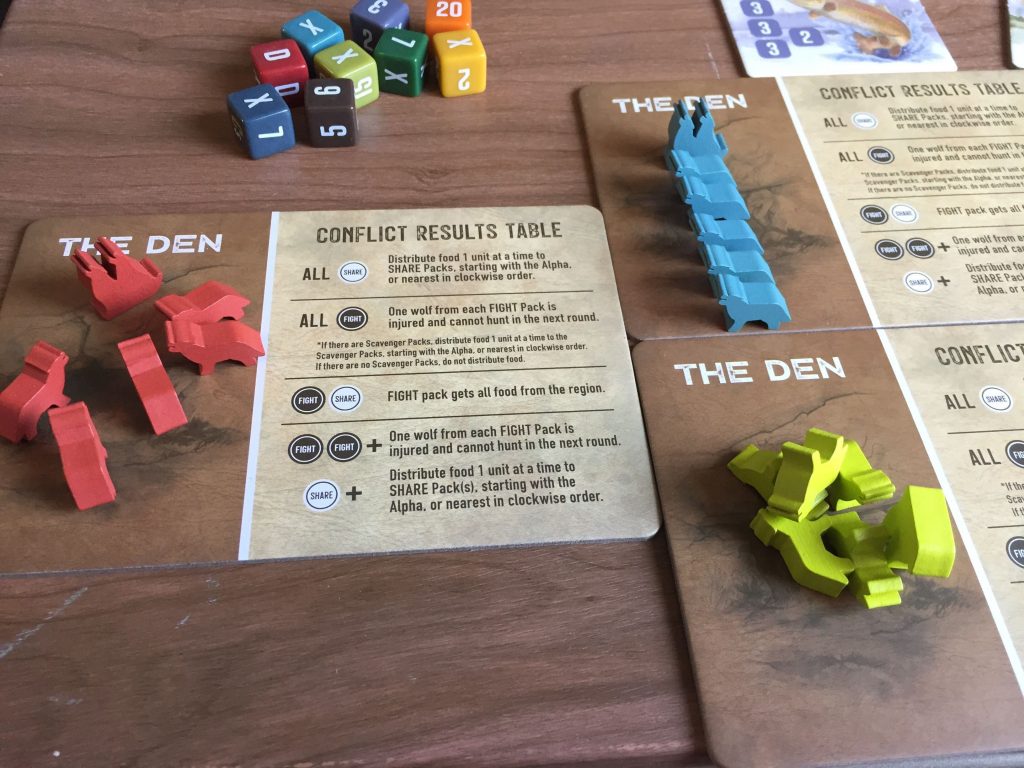 This thematic re-skin of the classic “Prisoner’s Dilemma” has a few other thematic changes that make it harder to get your meal. Right before the Conflict step is the Chase, where a 6-sided die (hereafter referred to as a D6) is rolled to see how much, if any, food is present at each source. Each D6 is linked to a specific location, which shows you what most of the results might be. The dice all have an “X”, which means no food is present that round (unless you are in the livestock location, where the die has a “D” to indicate that your wolf was killed). The only thing more disheartening than losing a Fight/Share conflict in this game is committing most of your wolf pack to a high-food location, only to have an “X” show up on the die and get nothing that round, especially since the higher-reward sources in the Deep Forest costs players 1 food per meeple – so it’s possible to net negative in a round! D6s also come with a “C” on some sides, meaning that the food will be Carrion next round. Carrion has a set amount, so there is no chase, but it’s lower than the usual max D6 roll. Also, in my experience over several games the player who gets into the lead early often runs away with it since whoever is in the lead gets to go first each round. 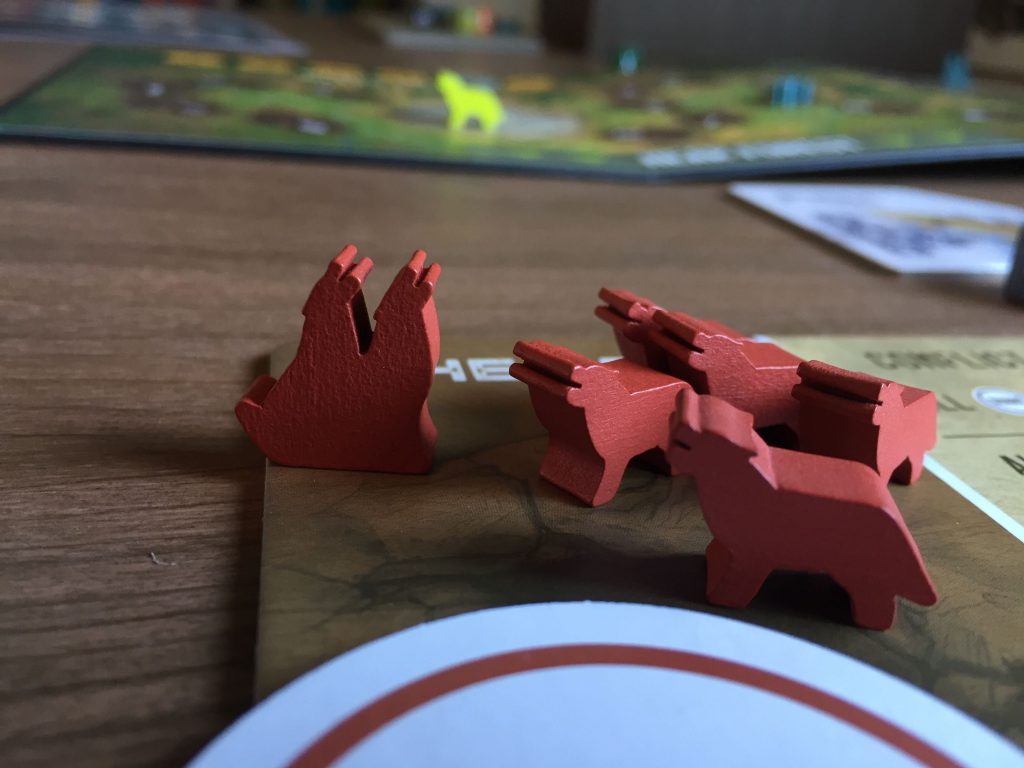 Your Alpha pair counts as placing one meeple, but for total wolves in a location counts as two.

The Alpha is easy to set-up and understand – even though the box says 8+ I was able to explain and play it with a preschooler and 7 year old. If you’re looking for a light strategy game to introduce younglings to gaming, this could be one to look at. It has good quality components and the art is decent to look at – animals look realistic, and the meeples are nice. A reoccurring irk of mine is the player color choice. The different wolf packs are red, blue, lime green, forest green, brown, and tan. What’s wrong with purple, pink, bright yellow, orange, even white or grey – you know, actual wolf colors? I can’t think of anyone in my gaming group who would open the box and say, “Oooh, gimme those tan wolves, that’s my favorite color!”

I like the theme of The Alpha – I can’t think of any other games where you play as packs of wolves – but once I realized the game was mainly placing meeples and the Prisoner’s Dilemma, it kinda lost any momentum for me. It doesn’t do a whole lot of good to try to outsmart opponents when you’re still at the mercy of the D6 roll after placing your wolves. A couple times each game I would feel good about getting the most wolves somewhere then end up snookered by a “X” on the die roll. The game really felt like it needed some cards or something to give each player a small advantage, or the ability to move meeples later in a round after everyone was done placing them. It would have been nice if, like in some games, when you get nothing for your attempts you still get to draw a card or receive a resource.

I’m also going to hone in on the player count – having a minimum of 3 or more players is always a bad thing. The Alpha has no two-player or solo mode (missed opportunity – could have called it Lone Wolf) so you need a couple other players each game. 3 is an odd lowest-number count, but I also wouldn’t want to play with 6 at the same time. Even in a light game like this one I feel like that would take too long for people to decide where to place their wolves and how to resolve their conflicts. 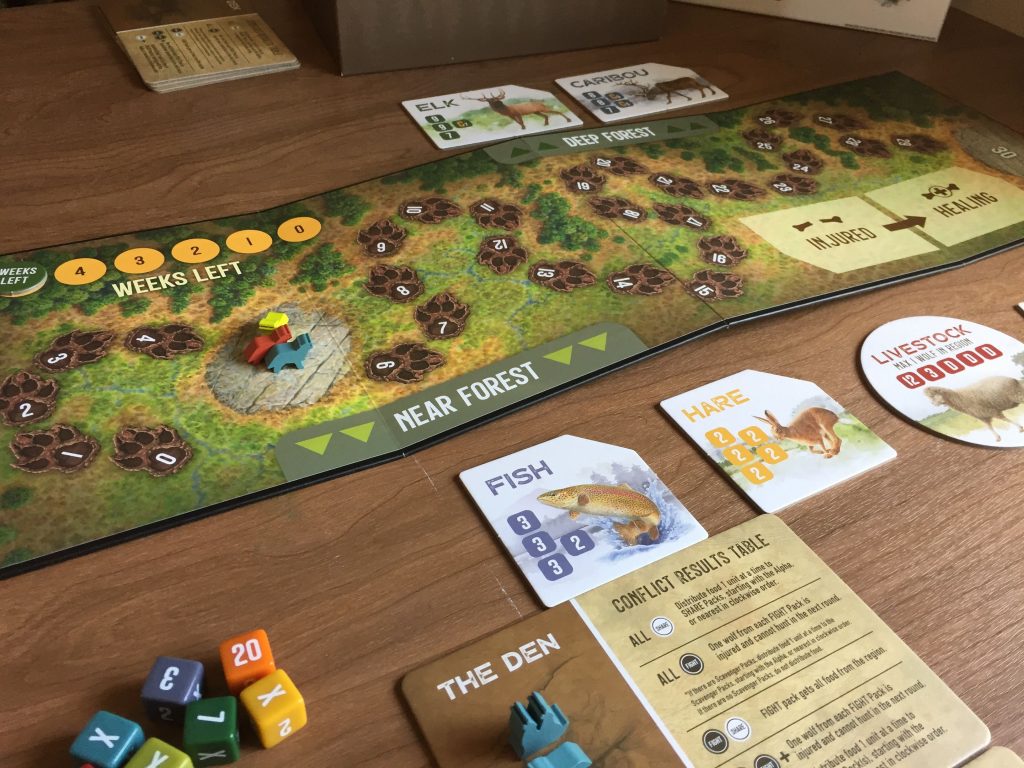 Initially, I felt like The Alpha had a lot of potential – good art and components, good theme – but in the end I left a bit disappointed. If all you want is a light strategy game with some wild doggos, this game will work. However there are so many other options out there in the Tabletop hobby that I’d be hard-pressed to make this my go-to suggestion.  Other games like Smash-Up or King of Tokyo have the same light strategy, but with more color and far more player choice.

A review copy of the game was provided by the publisher.

This game sounds really interesting on paper, but unless you're looking for a light strategy game to pull someone or some child into the hobby, you have so many better options.