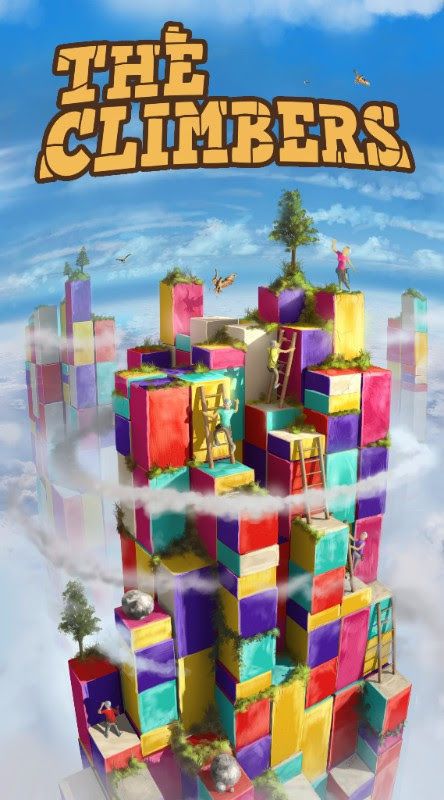 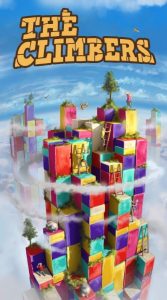 The Climbers is a three-dimensional abstract game from Capstone Games. Part of their “Simply Complex” line, this game has a great aesthetic, and can be enjoyed by gamers of all ages.

I was delighted when I heard Capstone Games was reprinting The Climbers. For years, I had been interested in this little-known game, but I had never been able to try it due to its relative rarity and its outlandish aftermarket price tag. Thanks to wider distribution from Capstone’s shiny new edition, I finally got to play this mysterious game.

The Climbers is a two- to five-player game in which participants strategically ascend an ever-changing tower of colorful blocks. To prepare the game, players randomly construct a tower using the plethora of wooden building pieces. There is no prescribed setup, so each game will begin differently and feature unique spatial challenges. The chunky blocks come in three primary sizes: half cube, whole cube, and double cube. 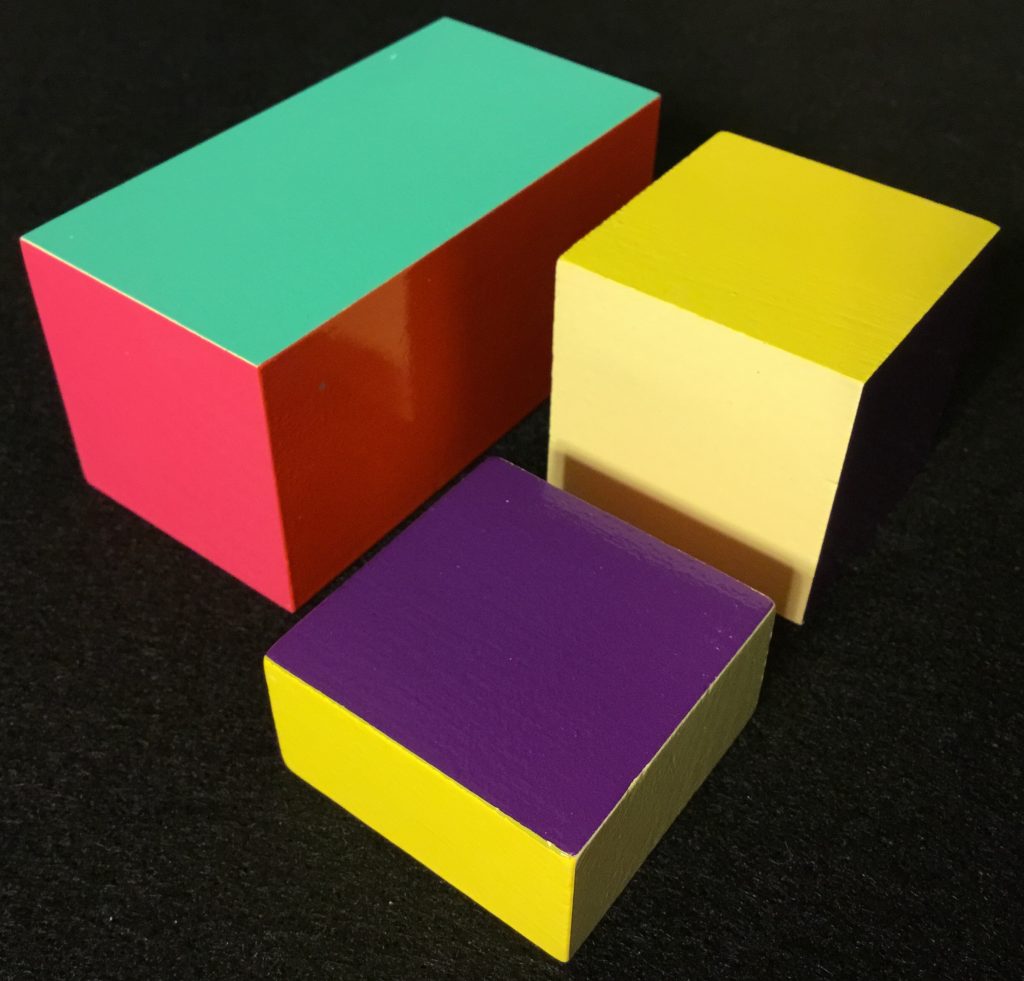 Each block features six differently-colored sides, five of which correspond to the player colors, and the sixth is neutral. It should be noted that the half- and double-cube pieces are not identical; though they always show all the colors, they are distributed differently among the six sides. In other words, a particular color may appear on the larger side of one block, and the smaller side of another of the same size.

When the game is set up, it will look something like this: 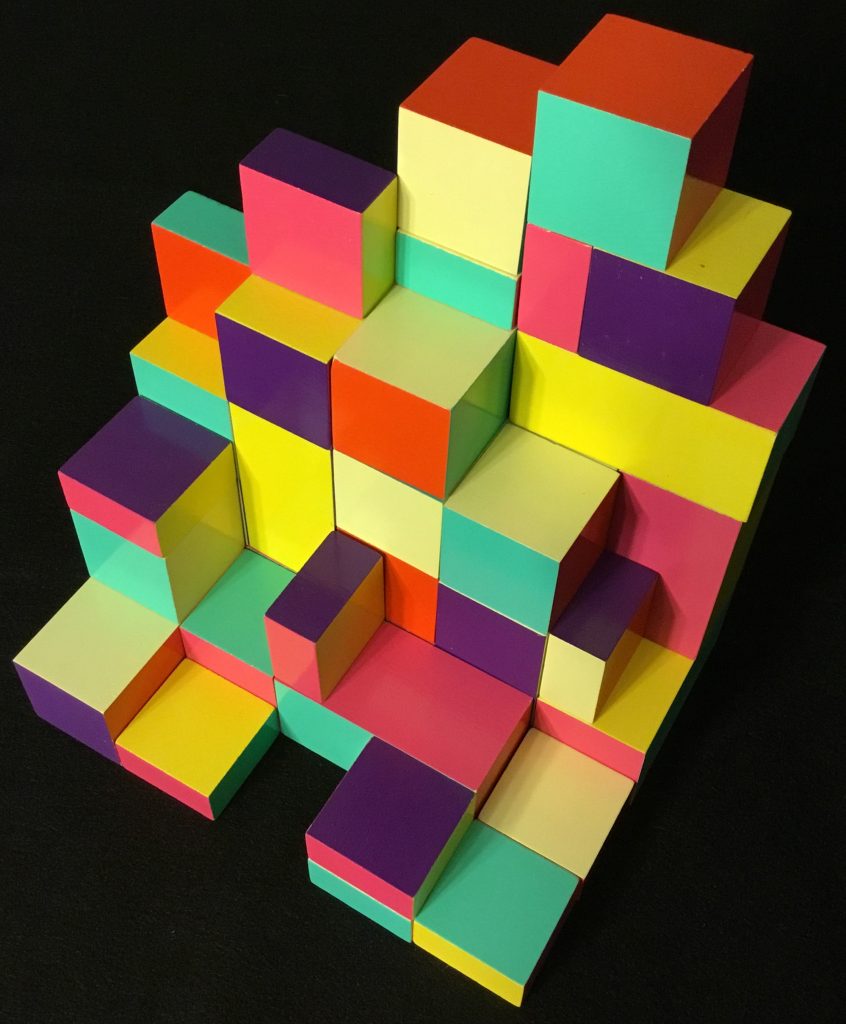 Once the tower is built, everyone chooses a player color and receives the appropriate pawn and “blocking disk” (more on this in a moment). Each person also gets a long and a short ladder. 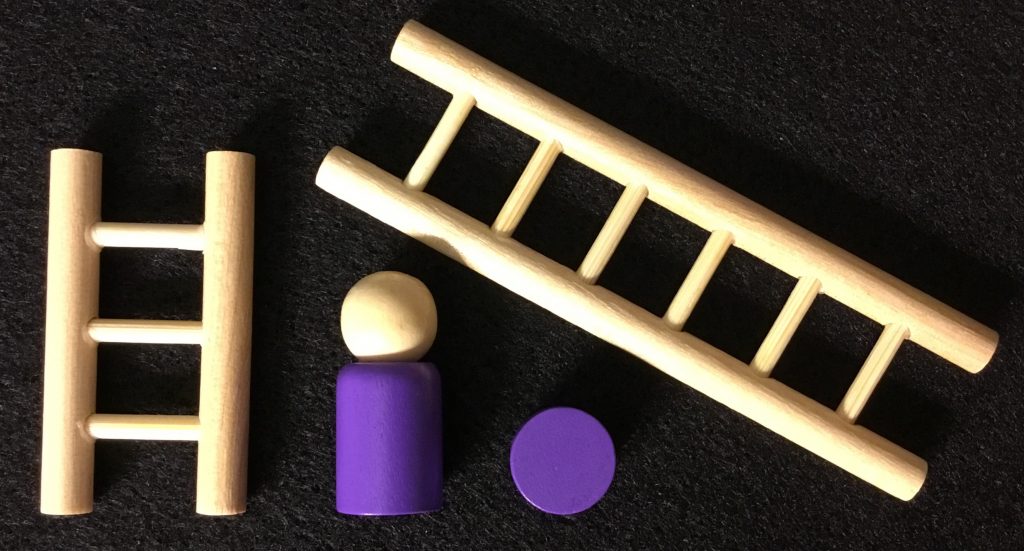 On a player’s turn, she may move her pawn up the tower as many times as legally possible. To help maximize her movement, she may also change the position/orientation of a single, empty tower block. A pawn can only ever occupy a space of its own color or the neutral (beige) color, so clever manipulation is key.

Pawns can climb a height of half a cube by themselves, but will need to use a ladder to ascend a farther distance. For example: 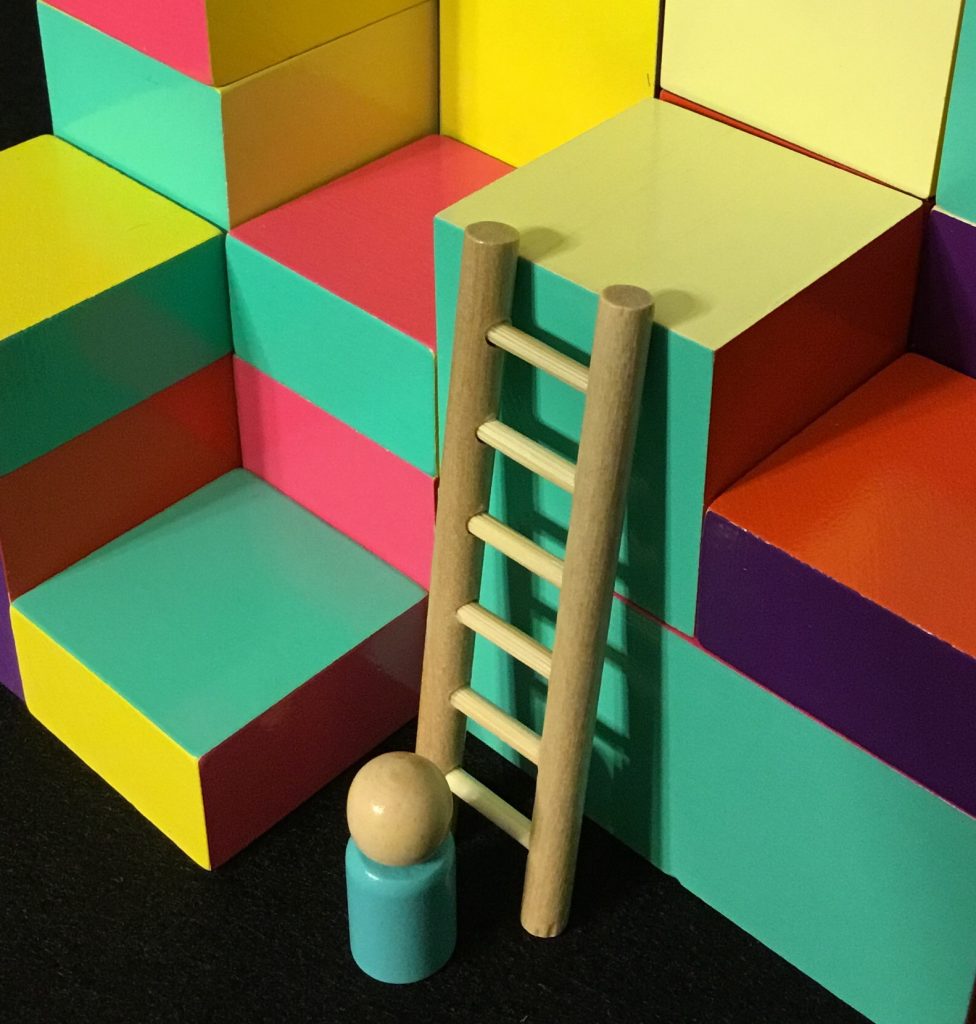 In the image above, the pawn could climb the left, half-cube block by itself (it could occupy this space since its color matches the color of the space). Alternatively, if the player wished to use a ladder, the pawn could ascend higher, to the indicated, neutral block, but the ladder would then be lost. Multiple players may co-exist in the same neutral space.

Ladders provide one-time-use assistance, and are removed thereafter. This creates an interesting nuance, as participants have to determine the optimal moment to use them. They are incredibly helpful, and players will miss them when they are gone.

Blocking disks afford players a bit of meanness. Once per game, each person may place their disk on an empty block, meaning that for an entire round, no one may occupy or move this block. (It is quite entertaining to hose an opponent with an perfectly-placed blocking disk.)

To illustrate how this works: 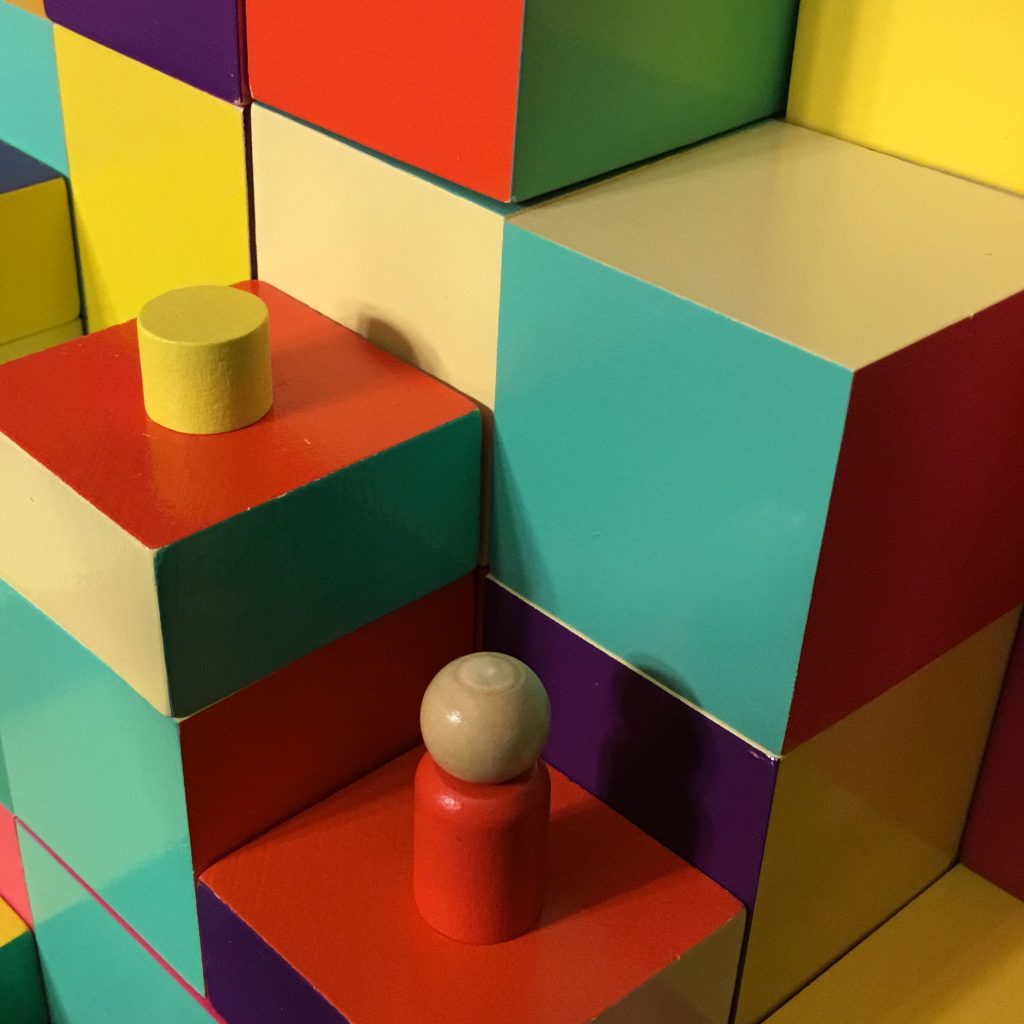 Normally, the red player could move to the upward-adjacent red space by simply using a short ladder. The yellow player, however, decided to block the space for one turn. Now, red will either have to use a long ladder to get to the neutral block on the right, or find another path altogether!

At the end of each player’s turn, all opponents may take a free movement, if one is available. This adds to the overall tactics, as the active player must be sure that a block they move only helps them, and no one else.

The game ends when no players move upward for an entire round. At this time, the player who is highest on the tower wins. If multiple players are highest, the person who reached this level first breaks the tie. This is a very clever end-game condition, because the highest point of the tower can change as blocks move. Thus, someone can reach the pinnacle, but a higher point may come open later, meaning they are no longer in a winning position.

I really enjoyed The Climbers. Its deceptively “cute” look contrasts nicely with its cutthroat play style. Clocking in at around a half-hour for a full game, it offers a rewarding experience in a very manageable timeframe.

Aesthetically, it reminds me of the mobile game Monument Valley. It has this strange, otherworldly quality to it with its vibrant, ever-morphing playing field. The 3D effect gives the game a nice table presence, and there’s just something very nostalgic about playing with wooden blocks. The top-notch components fit snugly in the box and give the game a satisfying physical weight.

The Climbers is a very simple game, but its rulebook could use some work. Though nicely illustrated with lots of pictorial examples, it took me a couple of read-throughs and instructional videos to be clear on everything. On top of that, at least one significant rule is only mentioned briefly, and can easily be missed.

The overall play experience is fun, but it is definitely better with more players. As I mentioned before, this game is much meaner than it looks, and the interaction ramps up substantially with more pawns in play. The Climbers falls in the family game category, but players should be aware that it can have a bit of “take-that” shenanigans. As long as no one gets too upset by opponents tactically messing with them, everyone should have a good time. 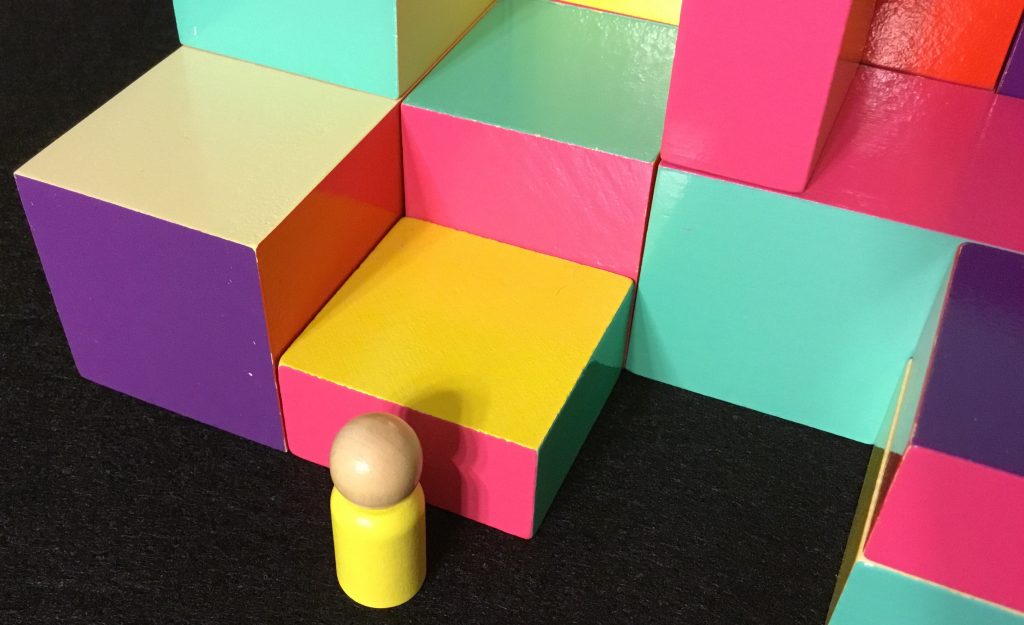 I recommend checking this one out. The Climbers offers enough depth that gamers will enjoy it, but it uses a simple enough system that it remains accessible to new folks. This is certainly a keeper for me, and one that I expect to join my regular game night rotation.

(A review copy was provided by Capstone Games.)

(As a tangential note, I am ecstatic that Capstone is also going to reprint Neue Heimat, another small-scale title from The Climbers‘ original, defunct publisher, Chili Spiele! Keep ’em coming, Capstone!)

The Climbers is a very unique game. Mixing cute aesthetics with mean gameplay, this is an enjoyable, interactive experience. Though its rulebook would have benefitted from some more clarification, the game itself is very cool, and leaves players wanting to try it again.