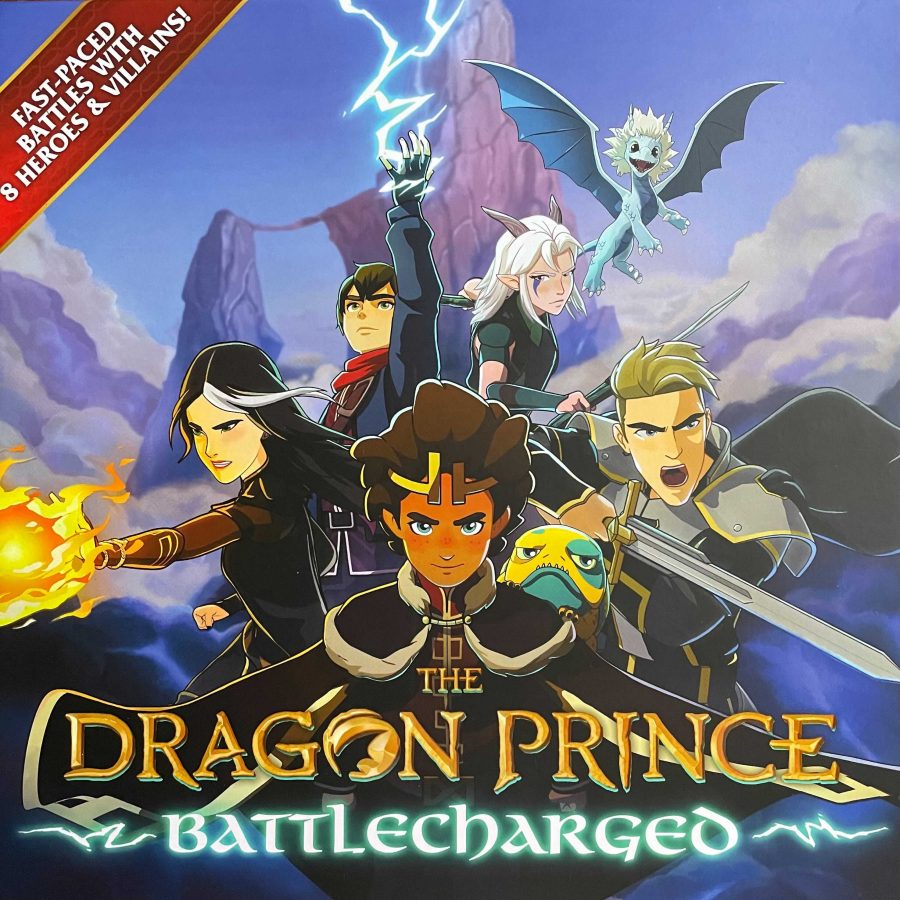 The Dragon Prince is an animated Netflix show that follows the exploits of two humans, an elf assassin, and a motley crew of supporting characters. The Dragon Prince: Battlecharged is a grid-based hand-management miniature battle where players control 1-2 characters, each with their own deck and abilities. So is it a roaring good time, or is this dragon just a komodo? Read on for the review!

Players will use a combination of attacks and spells, depending on their chosen character, to damage their opponents. Players lose health tokens as this happens, but when they lose their last one they are simply knocked out, and can rejoin the fight on their next turn with full health and no lasting effects. Some characters use magic, including dark magic, while others are more physical-attack focused. Most of the characters employ a mix of both. The game ends when one side gets 3 knockouts.

The Dragon Prince: Battlecharged features 8 playable characters that span all 3 seasons of the show. Each character has a unique ability, as well as different attacks, health, energy, and movement. An especially great part of the game is that you have access to a basic move and basic attack even if you don’t have a move or attack card in hand or can’t afford to play the ones you have. This means you should have almost no wasted turns.

Cards come in 4 flavors: attack, move, technique, and react. You can play 1 attack or use your basic attack, and 1 move or your basic move. Technique cards can be played on your turn, and as many of them can be played as you’d like. React cards let you block or intervene when an ally is attacked, provided you have the energy to pay for it. Playing with multiple heroes means you’ll shuffle the 2 characters’ decks together, which gives the game some extra replayability.

The game comes with exquisitely detailed minis and 3 double-sided play boards, along with dice for energy and tokens for health and knockouts. And that’s…about it, really. I was a little surprised to not find any story missions or quests, but there’s nothing stopping anyone from setting up and playing out their favorite moments from the show or trying out odd couple combinations.

While The Dragon Prince: Battlecharged lacks a certain amount of depth, so does a waterslide. They’re both fun, quick, and they leave you wanting to try again at the end. Sometimes it’s great to have a game where you just show up and start playing. It ends up feeling like a cross between Descent and Smash-Up, and that is 100% a compliment. Fans of the show and/or fans of hand-management battle games should definitely check this one out.

It's like a waterslide. Not deep, but fun, short, and leaves you want to go again as soon as it's over.