The Goonies meets Jumanji, with a dash of Scooby-Doo. 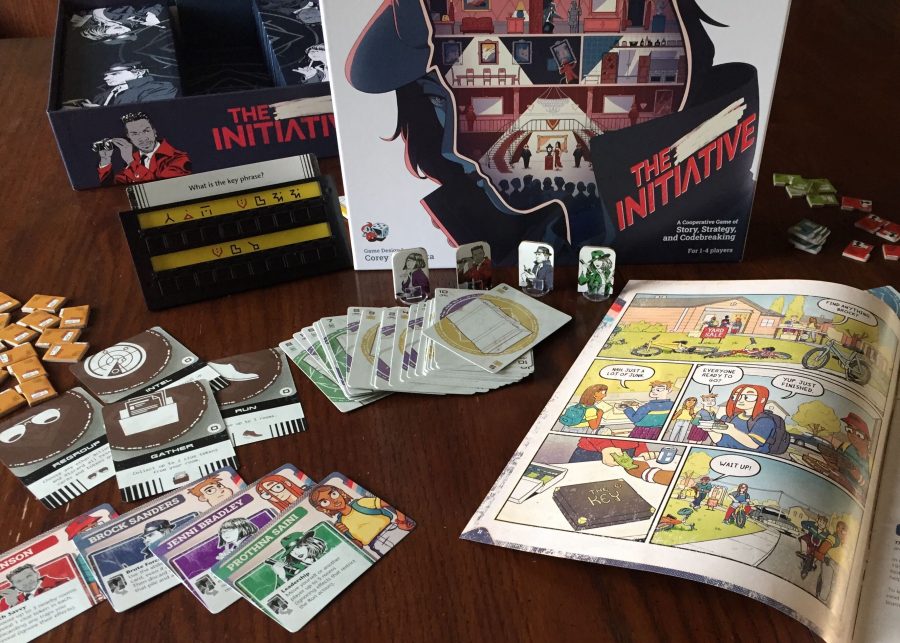 In The Initiative players will play through a 14+ game campaign as they read the accompanying comic and unlock the many secrets the game has to offer. What first might appear as just a simple move-and-reveal game played via cards is actually much, much deeper and even has different levels that can be played after the campaign has been completed. Full of great art in both the comic and components, and with a family-friendly mystery to unravel, The Initiative is an easy recommendation to any game group.

The Initiative feels like a blend between The Goonies and Jumanji as the characters in the comic start out innocently playing the game The Key but realize there’s something more going on. This arc of realization mimics the actual player’s arc (or at least it did for me) as I came to realize the game had much more to offer than I could tell at first glance. To be honest I wasn’t impressed after the first game, but halfway through the campaign I had 2-3 sheets of paper strewn about with different methods of decrypting codes and scribbled notes as I planned out how soon I could get my family to play another round. Due to COVID I played the game entirely with my 8-year-old padawan and 4-year-old youngling. The youngest struggled with playing the best cards at the right time, but with a little help was able to have some agency. 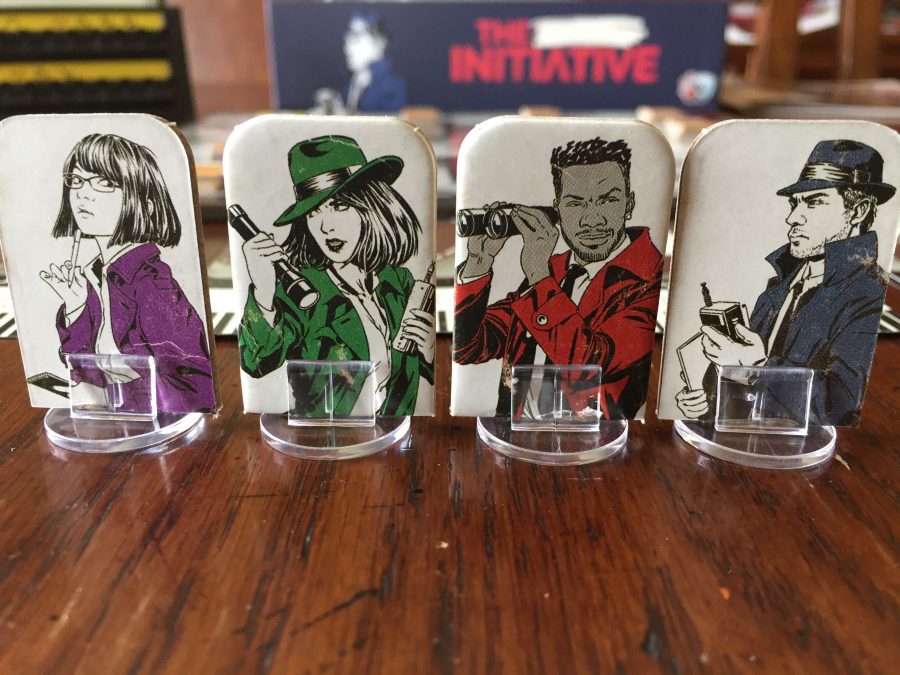 Moment-to-moment players will play cards from their hand of 4 in order to Run, Gather, reveal Intel, and Regroup. Cards have to be played in ascending numerical order, so if another player played a 3 most recently on Run, the next player wanting to Run will have to play a 4 or higher. Players can reset any of the other 3 piles by playing a card to the Regroup stack, but they must be careful – the regroup stack cannot be reset. Players all have individual special powers that cost 2 cards to use. All are helpful but since they burn through the draw pile they can be dangerous to rely on. Much like side-scrolling beat-em-ups from the early arcade days, using your special too much will only hurt you and your team.

Once the draw pile has been emptied for the first time, players shuffle the discard pile along with the Time cards. After 3 Time symbols have been revealed (one card has 2 symbols on it, the others just have 1 each), players are out of time and the round is over. It’s a great mechanic that ratchets up the tension because you realize just the act of shuffling the discard pile means you need to be at least halfway to your goal or you might already be sunk. Not all is lost however; more than once we were able to pull an unlikely win by guessing the clues we hadn’t revealed yet. 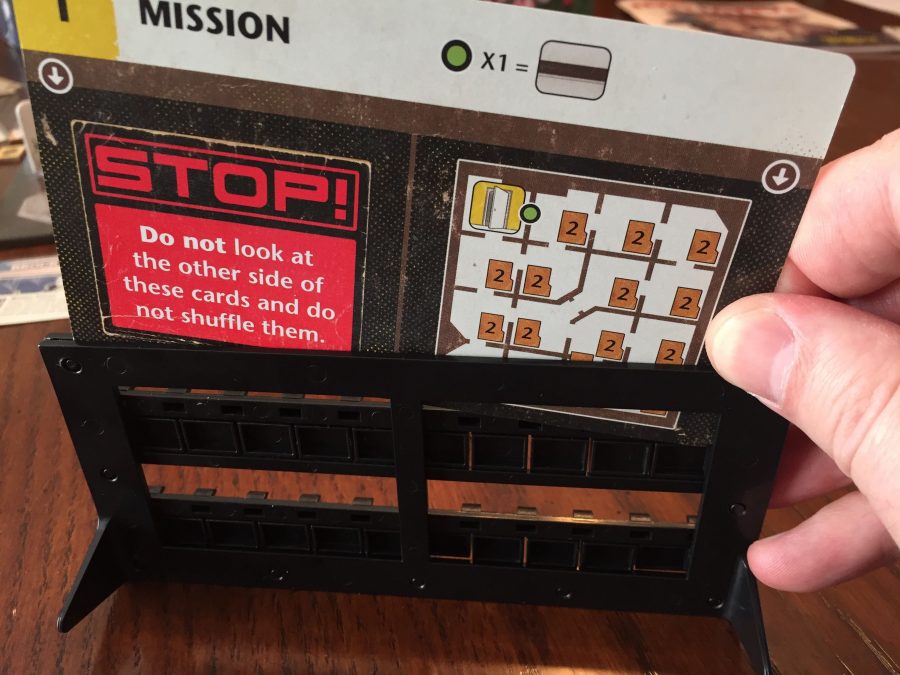 Players have to slip each Mission card into the Console, being careful not to accidentally see the clue on the other side.

Besides running around the board, the other main mechanism is revealing clue tiles via Gather or Intel actions. Clue tiles have symbols on them that may or may not be on the mission card. If they are present, players may flip that symbol up on the mission card after Gathering (not just revealing with an Intel action) the associated tile. Mission cards will ask players to guess a catchphrase, or answer a question, or crack a code with the help of the comic and the Secret cards that are gained along the way. Only once did we come close to being stumped – The Initiative does a great job of walking the tightrope between making it a challenge but not making it unsolvable. In fact, the comic pages often will give players hints in tiered steps, only giving a little at first if you just need a nudge. 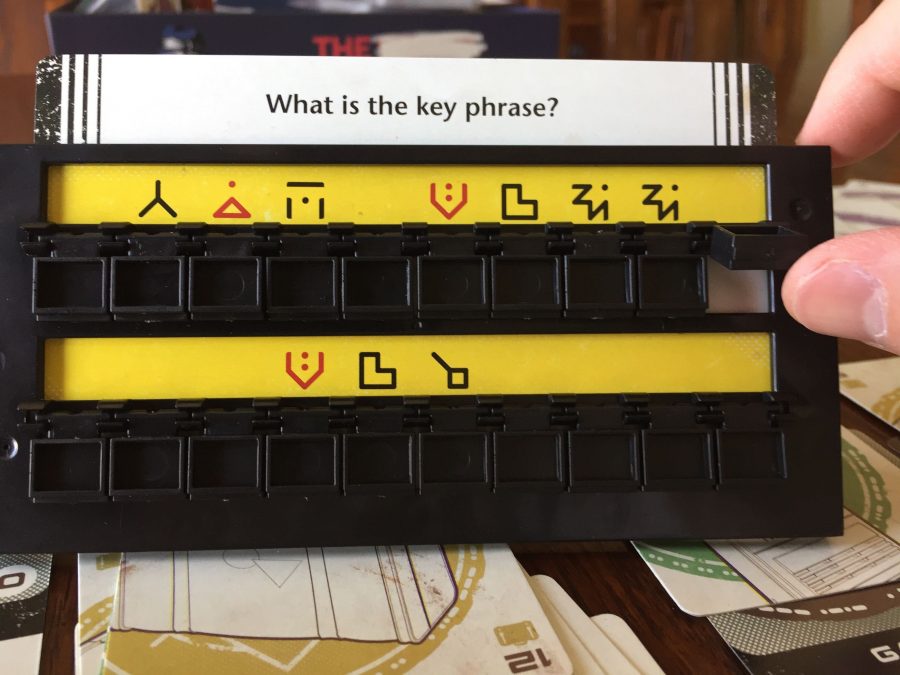 As you Gather clues you can flip up the matching symbols to reveal the answer.

The nice thing about The Initiative being a campaign but not a legacy game is that there is nothing keeping it from being replayed, except for if you have someone with a perfect memory in your group. I can only think of 1 secret that won’t hold up to multiple plays, and it’s the secret I saw coming. So if you beat the campaign and want to loan the game out, or if you want to play it again with a different group months later, 95% of the secrets are re-packageable as long as you put the cards back in order with all the warnings covering the hidden messages. Plus, there are even standalone missions to play outside of or after the campaign has been completed. 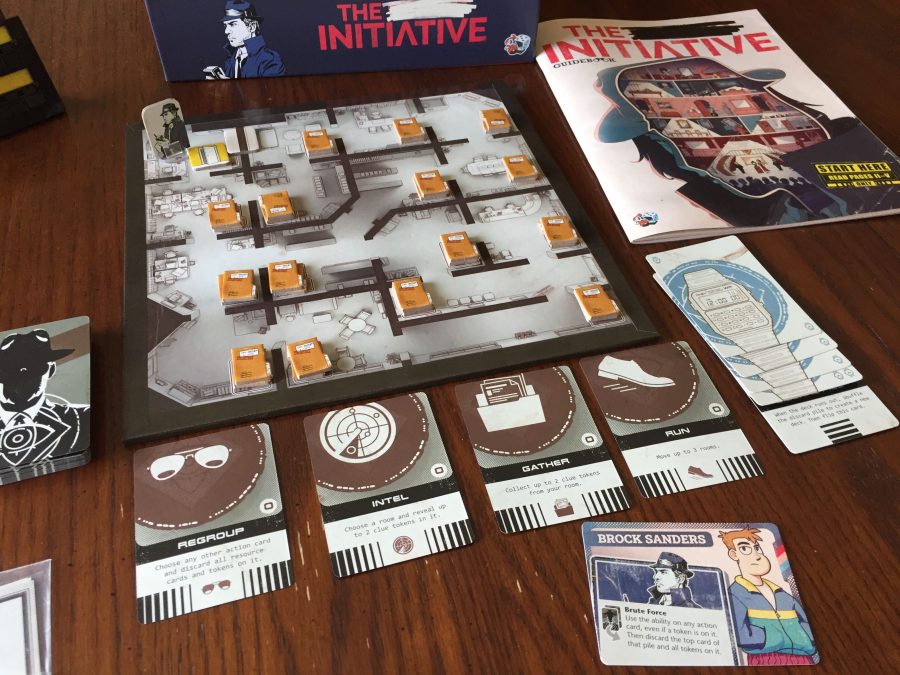 It’s obvious that a lot of thought and love went into The Initiative, and it shows. Great components and art direction, thoughtful clues and puzzles, and a story that draws players in all make for a great gaming experience. This is a 10/10 game, and if you enjoy mysteries or uncovering hidden messages along with your tabletop games you should definitely get it.

Great components and art direction, thoughtful clues and puzzles, and a story that draws you in all make The Initiative a great gaming experience.