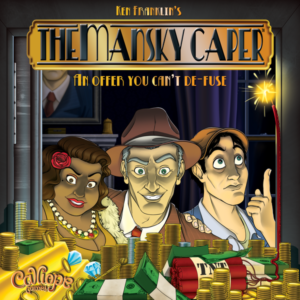 The Mansky Caper is a family-weight, push-your-luck experience from Calliope Games. Set against a 1920’s mobster backdrop, players are robbing mob boss Big Al Mansky’s palatial home. The team of robbers has agreed to split the loot, but surely no one would notice if one person got a little more than everyone else…

The theme of this game involves stealing riches from the home of a wealthy gangster. It is presented in a pretty harmless, tongue-in-cheek manner, but it’s something to be aware of.

The plan is in place. If your team can pull this heist off, you’ll be set for life. Just make sure you don’t trip a booby-trap in the process…

The Mansky Caper puts two to six players in the roles of thieves, bent on helping themselves to the riches belonging to the legendary Big Al Mansky. After they break into his stately manor, they get to work cleaning out his safes. At the end of the game, the winning player is the one with the best share of the loot.

Al’s house is made up of five rooms, each with its own safe. During setup, each safe is loaded with a number of tokens as shown on the room tile. These tokens come in three varieties:

These tokens are all loaded in the Great Rooms’s safe during setup.

All players receive a role card and matching standee, along with a treasure bag and a favor token (more on these later). They begin by dividing up into two rooms of the house; until a key is found, the other three rooms are inaccessible. Nearby, players place the Getaway Car tile, where they can stash their loot for safekeeping. When everything is set up, the play area will look like this: 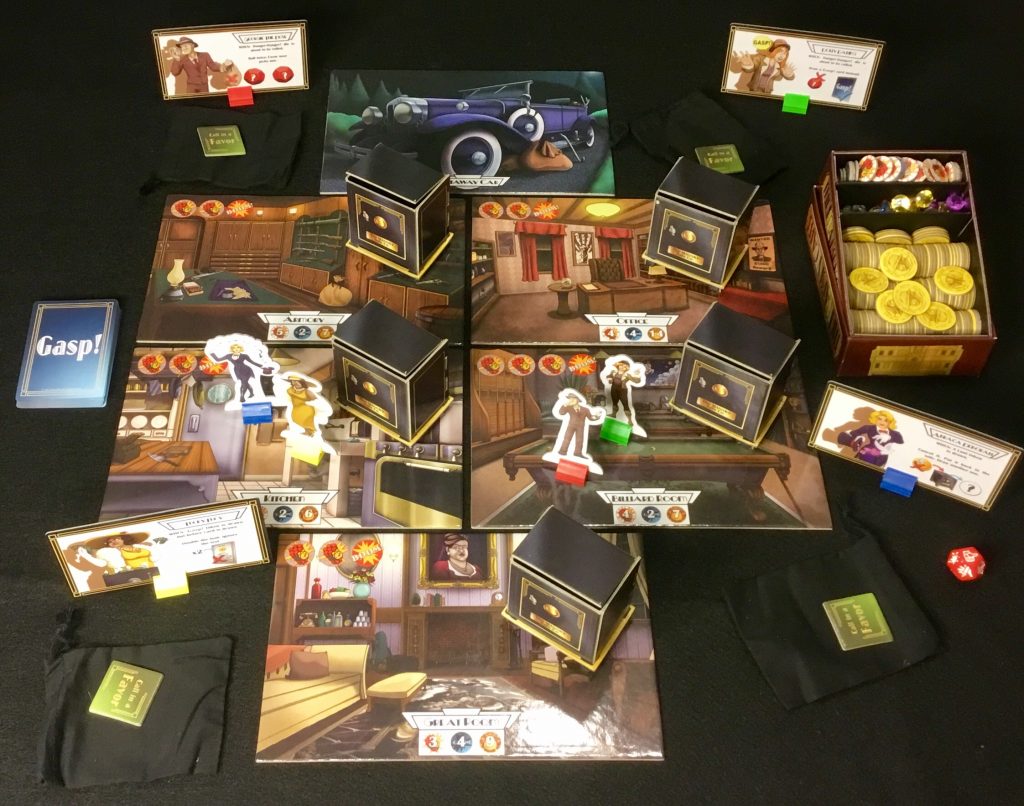 Players have three options on their turn. They may either:

Most of the time, players will be digging in the safes. After all, that’s why they came in the first place. If they find a loot token, they must divide up the loot evenly among all players in the room (leftover loot remains there). As an example: 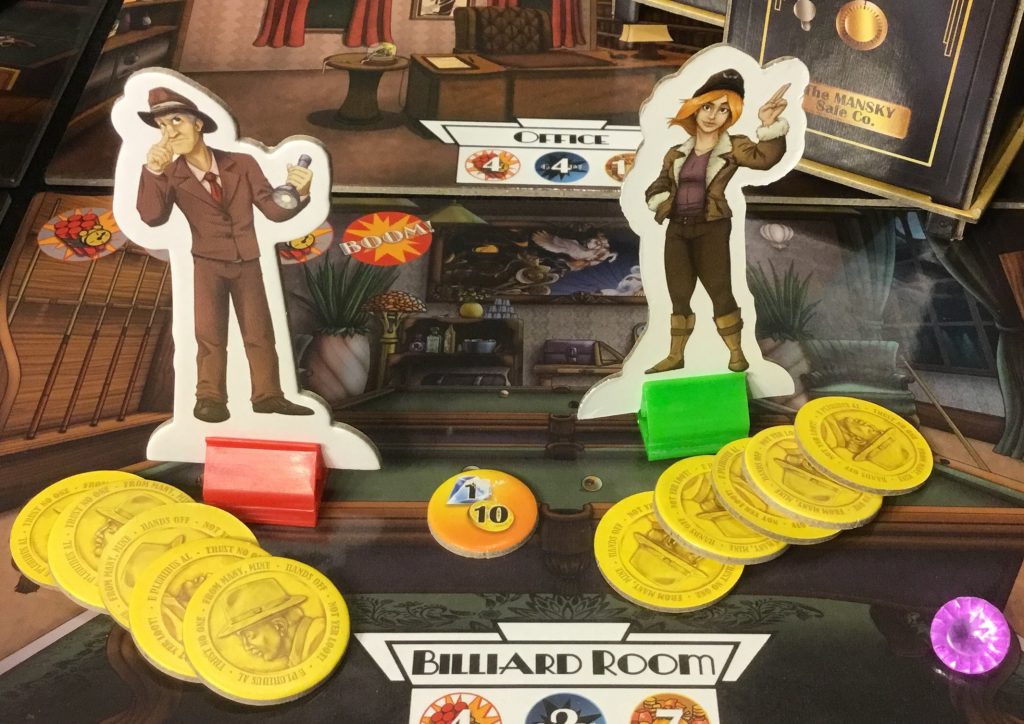 The red player just found a loot token that grants ten coins and a gem. Since green is also in the room, they have to split everything evenly. They each get five coins, but no one gets the gem yet! If red were to leave the tile, such that green was alone, green could immediately claim the gem.

Each room tile has a number of Danger! Danger! symbols printed in the upper-left corner. Whenever a matching token is drawn, the active player places it in the next open space of this track, and rolls the twelve-sided die. This roll can cause several outcomes, including:

So yeah, the die is risky. If a token fills the Danger! Danger! track completely, the room automatically blows up, causing all present players to lose their unstashed loot. 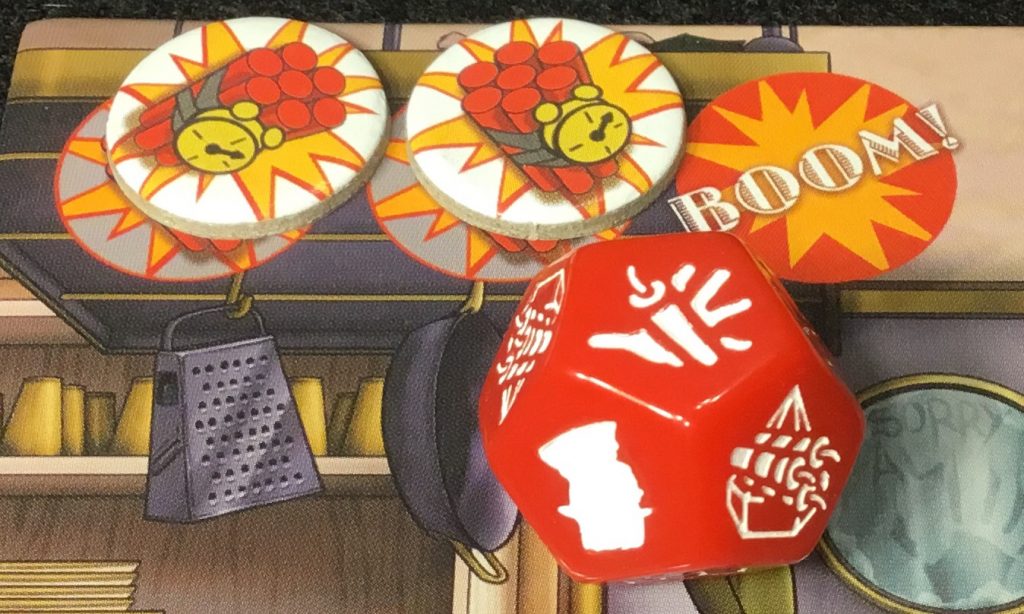 I’ve mentioned unstashed loot a few times, so I’ll elaborate on it now. As players move throughout the house, any items they pick up are considered “unstashed.” (Thematically, the characters are carrying the valuables on their person.) This means that if a room blows up, their loot goes with it.

In order to safeguard their loot, players can move to the Getaway Car. Any unstashed valuables go in their bags, where they no longer run the risk of going kaboom. The downside to using this action is that while a character is at the Getaway Car, he does not receive a cut of loot found in a safe, since he’s not in that room. Basically, players can be greedy and risk losing a lot, or they can play it slow and safe.

Each character card lists a special ability. In a twist on the standard variable player powers mechanic, players cannot use their own abilities, but may pay a favor token to another player in the same room to use theirs instead. (There is also another use for favor tokens, but for the sake of brevity, I’m going to gloss over it.)

The game continues until all rooms have blown up or all players agree that they are done pilfering. At that point, the player with the most valuable loot wins.

The Mansky Caper looks impressive right out of the box. It comes with almost three hundred tokens, dozens of plastic gems, a stack of giant, beautifully-illustrated room tiles, and five awesome 3D safes. Calliope Games’ production quality is usually good, but this game raises the bar for them. 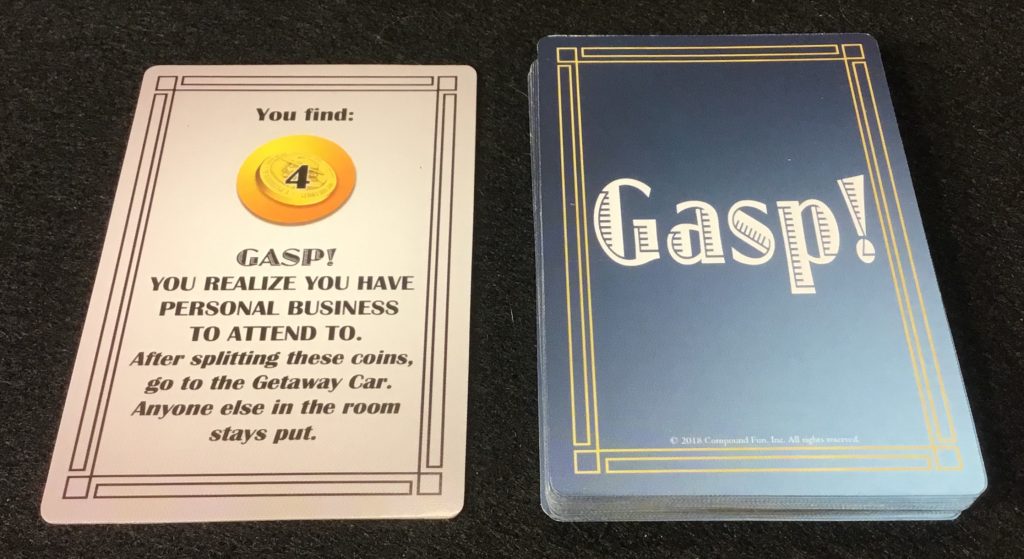 The theme comes through strongly, which is always a huge plus for me. Playing this game, I really felt like I was sneaking around, trying not to trip a bomb. The comic-book layout of the rulebook works well to set the scene, and it appeals to one of my other nerdy passions. 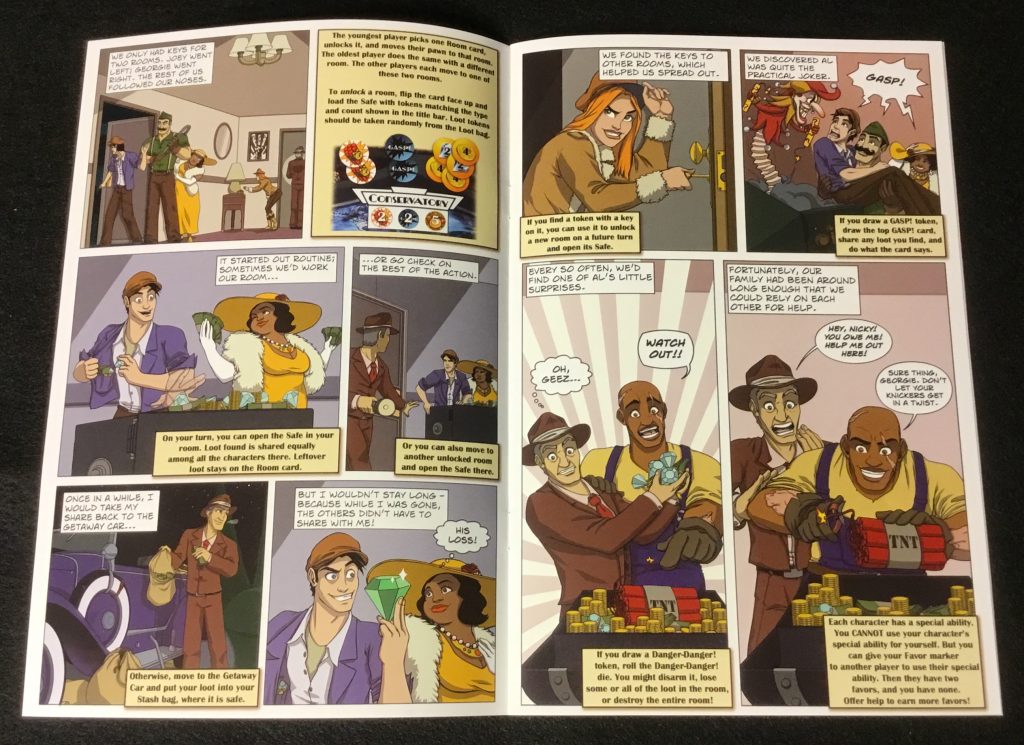 The gameplay is simple and straightforward, and by extension, the strategy is fairly easy to grasp. As such, I think The Mansky Caper would be a good choice for newer gamers or families (this seems to be Calliope’s sweet spot). If this sounds like a good fit for your game group, I suggest giving it a try!

A review copy was provided by Calliope Games.

The Mansky Caper seems like a great addition to Calliope Games' catalog. While not perfect, this beautifully-produced game provides great thematic immersion.