Review: The One Hundred Torii 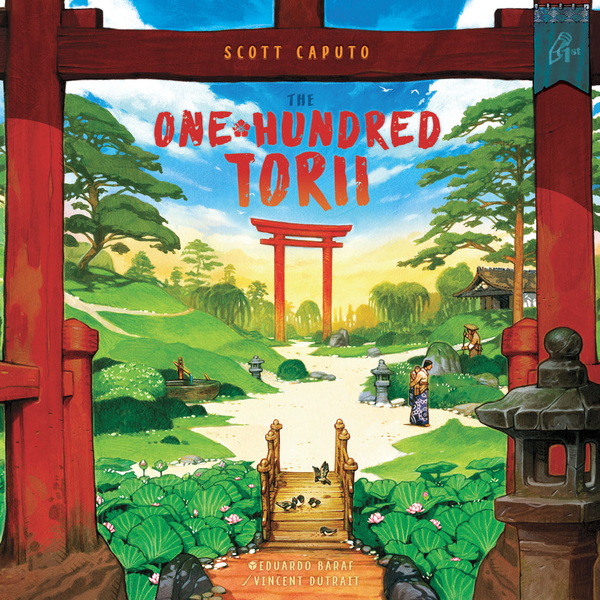 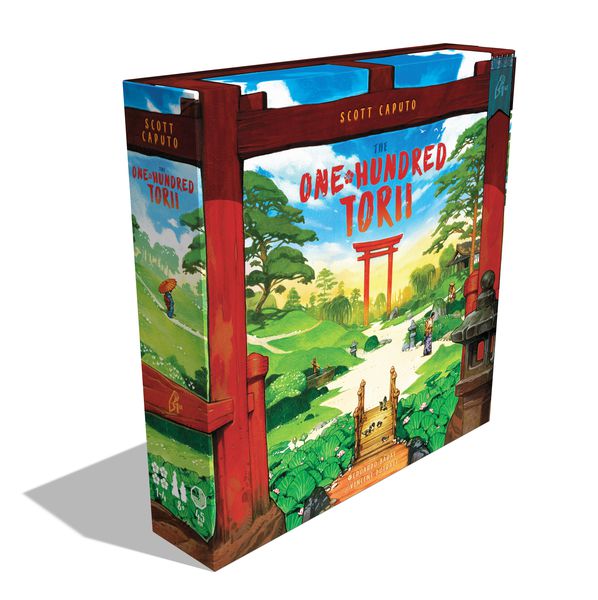 In The One Hundred Torii, players will be placing tiles and growing a Japanese garden as they try to visit different landmarks and earn points. Assisting them are the many Torii gates, as well as poets, samurai, gardeners, vendors and geishas. So, does a calm walk through a traditional Japanese garden make for a good tabletop game?

The One Hundred Torii has a gameplay loop that reminded me of Carcassonne, but with the thematic style of Tokaido. And while I mean that as a compliment, I actually think The One Hundred Torii does both better. This game also gives players multiple choices each round thanks to the different characters available during the Get Help phase, as well as forcing players to seriously consider the direction or facing of the tile they’re putting down. What looks like a light tile-laying game actually has a deep strategy and strong theme that is both fun and engaging. 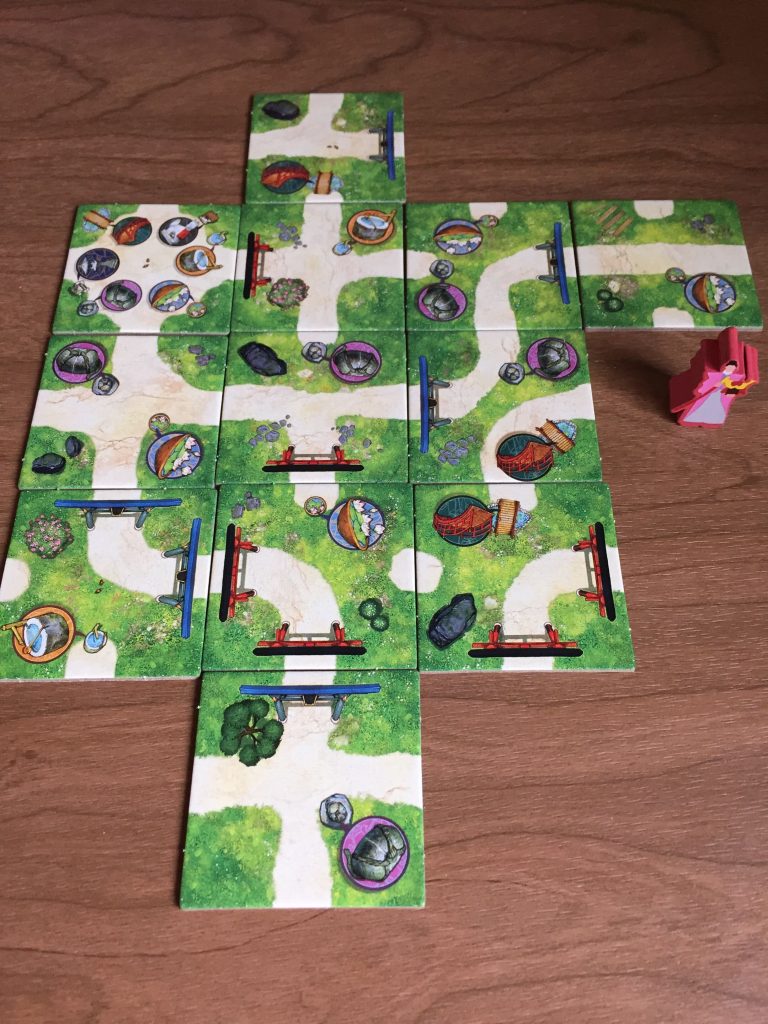 Samurai blocking; please turn back from this path now. This is not the way.

Sometimes when you’re playing Carcassonne, you just don’t have a good way to place your tile, especially the city tiles. That doesn’t happen in One Hundred Torii. Tiles have no placement restrictions, which helps add to the lush garden the players are all making. Occasionally you can make a small Enclosure that is not connected to the main path, but that’s actually part of the gameplay and will get you points as long as it has two landmarks in it. And occasionally in Tokaido, the game can feel like purely a set collection engine rather than a game, whereas in The One Hundred Torii the mechanics and theme feel like they’re working in conjunction. Players are trying to walk through as many gates as possible to get Journey Points and win the game, but it also makes sense thematically to be trying to see as much of the garden as possible.

If the players decide to Get Help, they have a variety of options at hand. The 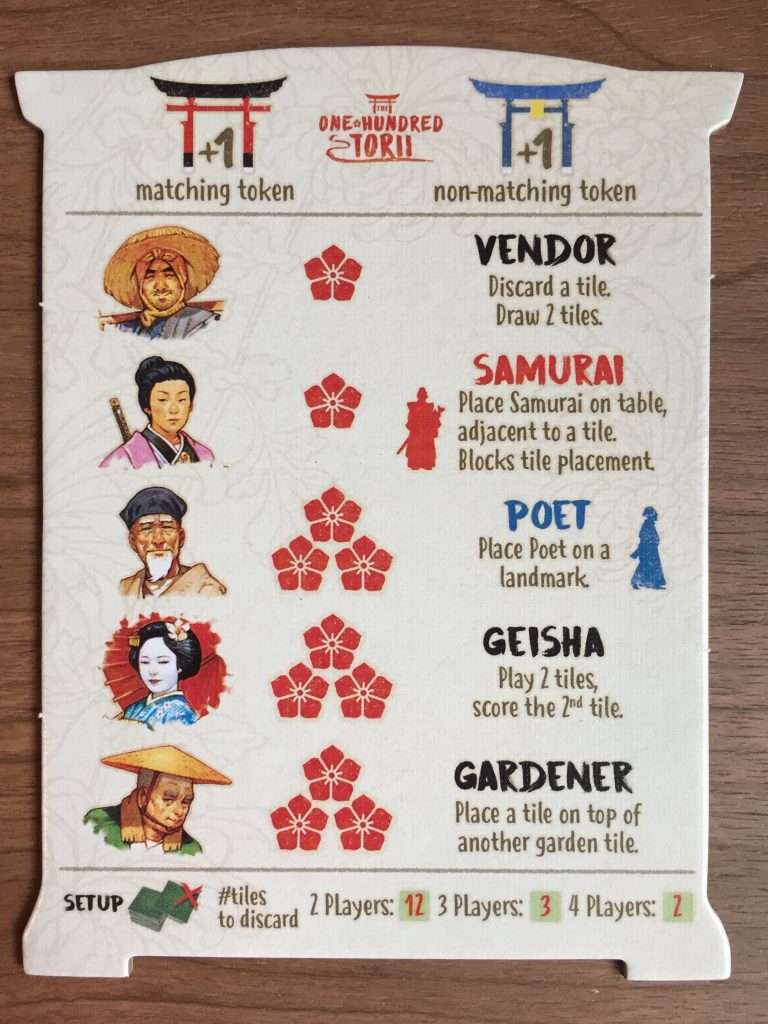 Vendor and Samurai both cost 1 token; the former lets you discard a tile and draw 2 tiles and the latter lets you place the Samurai meeple on the table to block tile placement. The Poet costs 3 tokens and can be placed on a landmark to block it, so that players can make a longer path to the next-nearest matching landmark. The Poet and the Samurai are moved only when another player uses them for the Get Help phase. The Geisha lets you play 2 tiles but only scores the second, and the Gardener lets you place one tile on top of another. Both cost 3 tokens to use. Players will get a character token worth 2 points at the end of the game the first time they Get Help from a character; the second time they use that character, they get to flip this token over, making it worth 4 points. The first person to use a character 3 times gets an additional token worth 3 points, and only the first person gets this token. 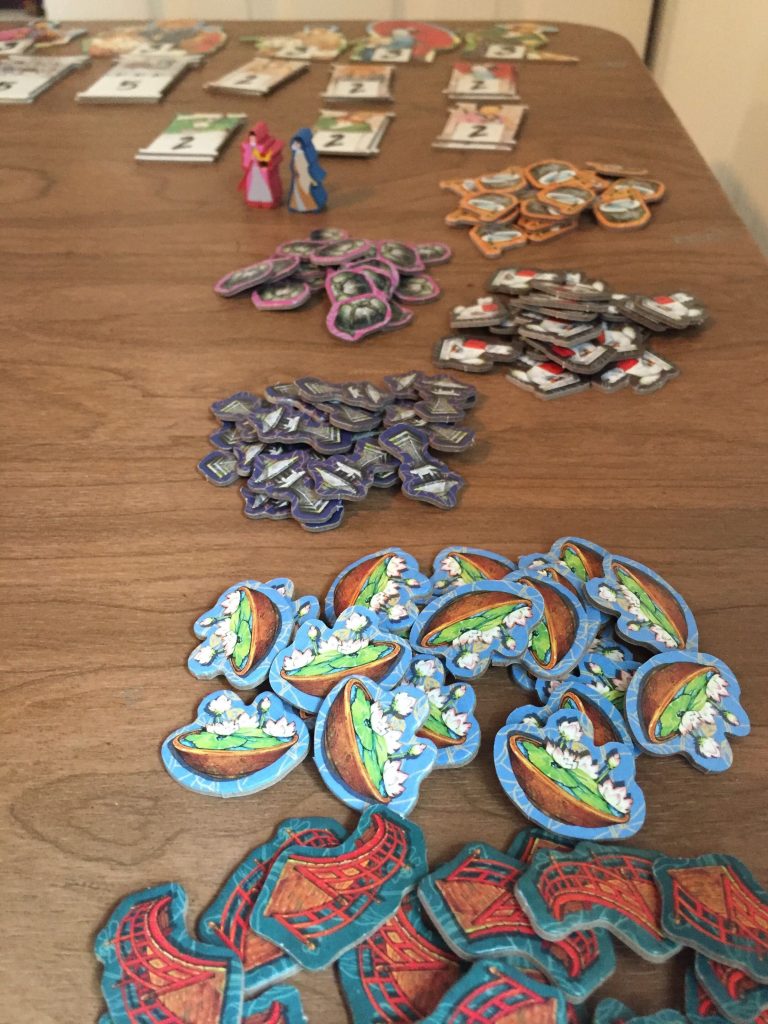 The Claim Rewards step is when players will get the larger Landmark Upgrades tokens, Character or Enclosure bonuses, and Achievement pieces. The big Achievements are the “All 6 Scoring” and “Three 10 Scoring” Achievements. As soon as a player has gotten 5 of each landmark they can grab the “All 6”, and as soon as 3 of those are up to 10 they can get the “Three 10” Achievement. There are only 2 tokens for each of these achievements in the game – one worth 5 points and one worth 3. This means players need to try hard to get these early on.

A player’s turn ends with drawing back up to 2 tiles – if you used the Vendor you skip this step – and the game ends when the draw pile is empty. Everyone then gets a final turn, including the player who drew the last tile. Then players count up their points (coins, small landmark tokens, and tiles are worthless at this point) and the player with the most Journey Points wins.

I like this game a lot. It isn’t just tile placement and it isn’t just a set collection – the two are intertwined, and both tie into the theme walking through this beautiful Japanese garden. You want to do a good job placing 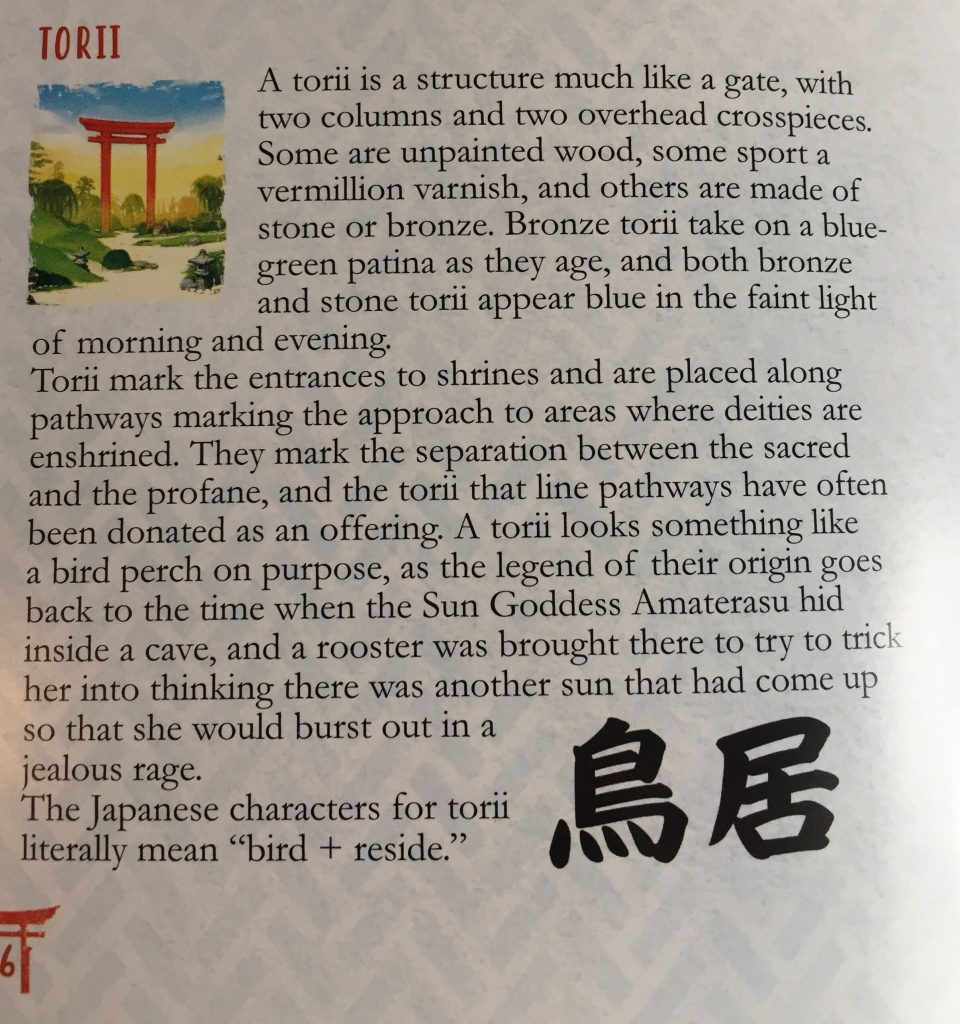 tiles so that you can walk through several gates and collect landmark tokens, but you also want to enjoy going on a long walk through several gates to see different landmarks. It feels more natural to try and see all the landmarks and talk to the different characters, rather than just checking off boxes. Come to think of it, I’m surprised that there wasn’t an “All 5 Characters” achievement for interacting with each character at least once in a game. The game did ship with the “Koi” and “Toku” mini-expansions, which are small decks of mini-cards that provide another strategic wrinkle such as getting a vendor’s help for free that turn, or immediately getting 3 small landmark tokens. While I appreciate their inclusion, I don’t think they’ll make or break the game.

The One Hundred Torii is a beautiful game that has its mechanics and theme walking hand-in-hand. It even includes a full 2 pages at the back of the instructions explaining the culture and background of Japan, as well as the different items and characters in the garden. If you have the means, and are even the least bit interested, I would highly suggest buying or at least checking out The One Hundred Torii.