Review – The Quest for El Dorado: The Golden Temples 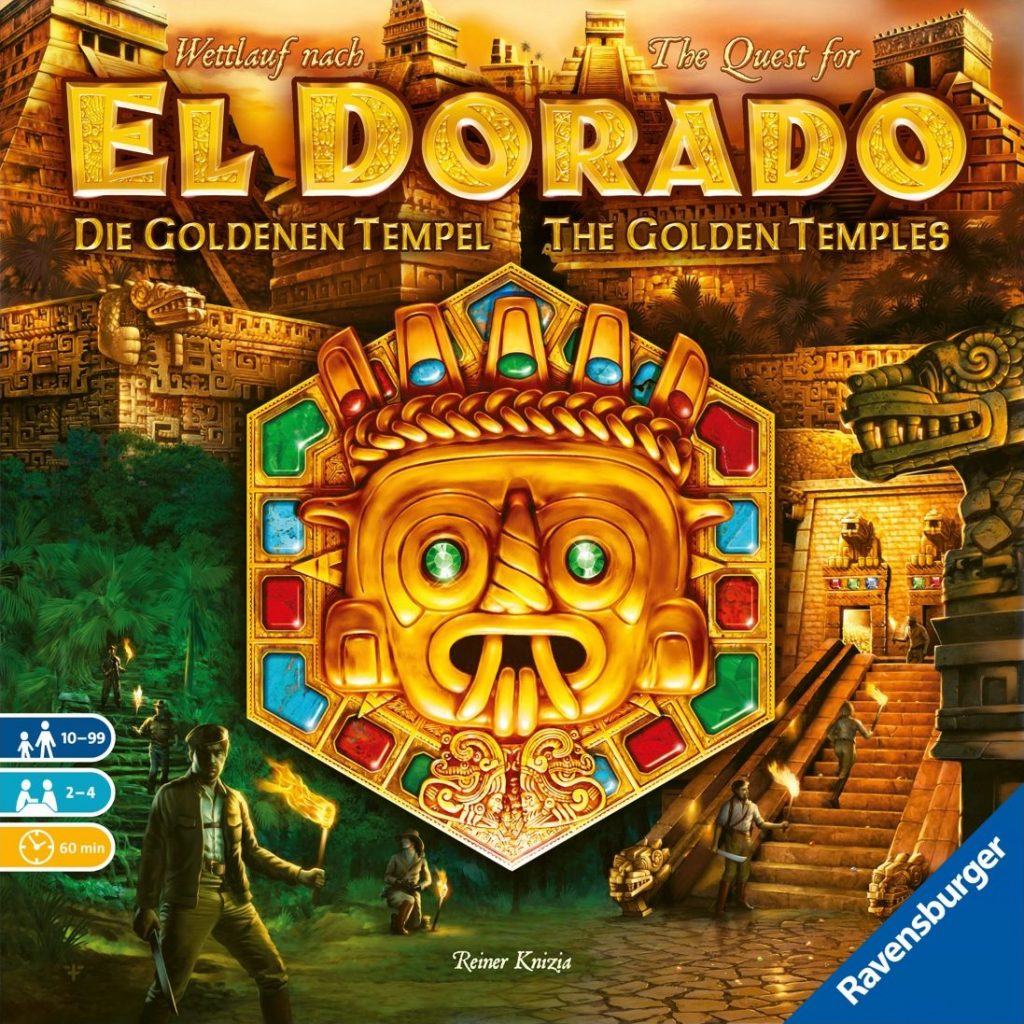 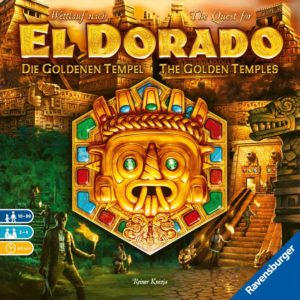 The Spiel des Jahres — the Family Game of the Year award in Germany — is still the most important award in board gaming. Even if your game doesn’t win, a mere nomination can draw a lot of attention and generate sales. It must have worked for Reiner Knizia’s The Quest for El Dorado, which has had both an expansion and now a standalone sequel, despite losing to Kingdomino in 2017. The Golden Temples has extremely similar gameplay to the original game, but a tweak on the theme: players have made it to the temples and now must explore them, collecting different gems, and then make it back out before anyone else. That thematic twist leads to some gameplay twists as well, but are they worth it? Let’s find out.

Much like the original, the game has a traditional Indiana Jones setting, so there are some mystical elements (see the front cover). However, the game is primarily about exploring the jungle with machetes and boats, finding treasure, and so on. I don’t find anything in the game particularly inappropriate for younger children, although the complexity of the game led to the publisher suggesting 10 years and up on the box. 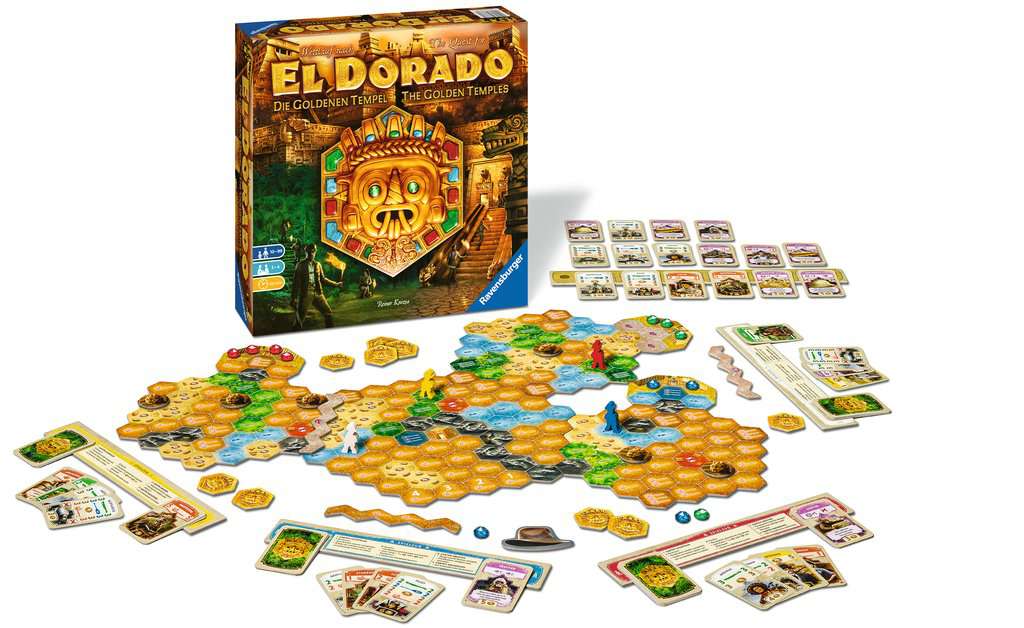 The Golden Temples shares so much DNA with the original The Quest for El Dorado, which I reviewed here, that I’m not going to spend too much going over the basics of what this game is. It’s a racing game that uses deck-building for movement, and the original is a brilliant design. Instead, I want to focus on what’s different this time around.

Two of the biggest changes are immediately apparent when you set up the game. There is a new type of terrain, indicated by torches (presumably meant to represent exploring a dungeon / cavern area), and a very different layout. Rather than racing in a near straight line to the end, players must zig-zag repeatedly across a more compact board, grabbing a gem of each color from three different areas, and then return back to the starting area. For this reason, it takes up much less table space!

Of course, a new terrain mandates a new set of cards. Many are variants of the standard movement cards, but now including the torch symbol. Some of the advanced purple cards are more clever; for example, one card lets you move twice on any two terrain spaces as long as both are 1-strength spots. This is a powerful card, and also one that you could easily use in The Quest for El Dorado if you wanted. I really enjoyed the new set of cards, and I still think the “partial market” mechanism, where only some cards are available at any given time, is a really unique twist on deckbuilding. However, there are some minor issues.

The first is that I simply felt more often like I got stuck with the wrong terrain cards in hand, now that there is one more type of terrain to traverse. I may just not be fully adapted to the feeling of The Golden Temples yet, and that may dissipate over time. However, I wonder if the designer knew it would happen, because there is a new rule that if you do nothing on your turn — no movement, no buy — you get a Gold from the supply. Wait, what’s a Gold?

Gold is a new thing in The Golden Temples. They can be used to move on the yellow “money” spaces on the board, or to help with purchasing cards. There are also spaces that require you to discard a gold (not a yellow card!) to move into. There are also several new cards that interact with gold; my favorite is a card that lets you pay 1-3 gold to move that many spaces without regard for terrain. However, while I like the idea, these add a lot of rules. Our first game had something like eight rules questions from a seasoned gamer (granted, one that had not played El Dorado), and several involved gold. They can’t be combined with yellow cards for movement, but can combine that way for purchasing, “lose a gold spaces” can’t be paid for with yellow cards, and there’s a nomenclature issue. What is the icon on the yellow cards? I had already adjusted to calling it “gold,” but now I have to somehow clearly and constantly distinguish between the two almost-the-same-but-not-really concepts. Even if I correctly said “money” vs. “gold” vs “coin” (and I even had to double check while writing this review), they’re too similar in standard English, anyway.

As an aside, I think the rules questions in our first game were a bit of an oddity (love you, Steve). The game is more complex than the original, but not by much, and wouldn’t hardly be at all without the gold. However, the rulebook could use some improvement. While it is usually clear with parenthetical remarks about a ruling, it would be better if they had more distinct language between, for example, a single card used for movement and the overall “Movement” phase. Also, Guardians are referenced in the rulebook before they are even introduced, which was jarring.

Since I brought up Guardians, let’s talk about them. The original El Dorado had a “Caves” variant, where the impassable Mountain spaces became Caves where players could explore to get upgrade tokens. This is a super fun variant that I always use. In The Golden Temples, these have become Caverns, and are now punishments… sort of. Most of the Cavern tokens, along with one of the new barricades, require you to give everyone else something positive. I don’t mind this at all — yes, it’s a punishment, but it makes players around the table happy, no one in particular gets sad, and it speeds up the game. However, one of the Caverns is a punishment, forcing a player to lose all of their gold. It can extremely brutal, particularly for an unsuspecting player who forgot that was a possibility even though I said so at the beginning and only ever saw the other types of tiles flipped, and then lost 4 gold.* (Love you, Steve.) It seems far too out of place for only one of the Caverns to act this way; since there are more than needed, I’ll be removing it, much like the Mandatory Quest in Lords of Waterdeep. I might even simply use the awesome Cave tokens from El Dorado, since I still own the game and intend to combine both in one box (they fit with room to spare).

While we’re talking about tweaking the game, it’s worth mentioning that the rules include options for a “mega-game” using both sets of tiles and cards from games. I’m not sure I’d encourage an avid gamer with a “shelf of shame” to go out of their way to play the mega-game over something else, but if you’re someone who wants to get every ounce of value out of your purchases and you like to do crazy things like play Carcassonne with every expansion, I’m glad it’s there. And while there aren’t any clear rules listed about minor tweaks between one and the other, like swapping Guardians for Cave Tokens, or switching 1 or 2 cards between each game, they were very clever about choosing particular symbols that make these things possible, and I look forward to doing some minor tweaking on my own.

The Quest for El Dorado was so slick, clean, strategic, innovative, and thematic — a truly rare combination — that it really impressed me. The Golden Temples is at least 80% the same game, if not 90%, so by sheer mathematics it’s a great game as well. Truly, my two complaints are easily fixed: once you’re two games in, you’ll know what’s going on with the gold coins, and then they’re quite a fun addition after that. And the one annoying Guardian is easily left out, at least for a first game.

So what’s the really good new stuff? Number one for me is the new layout. By having players zigzag between the temples, the board takes up less table space, and all players interact more frequently. If someone shot way ahead in El Dorado, you wouldn’t be bumping into each other much. Here, everyone is always near each other, making blocking (accidental or otherwise) far more relevant. It also makes it a bit more obscure if someone is way behind (love you, Steve), unless everyone is paying keen attention to the gems collected. Second, I love all of the new cards, paricularly the new purple cards with crazy effects.

And really, this is how a sequel should be, right? A bit more complexity that pays off for some brand new ways to enjoy a fantastic game. I’d still encourage new players to check out The Quest for El Dorado first, but then they should race right over and pick up The Golden Temples. I’ll be playing both for a long time to come.

*You’re not supposed to have more than 3 Gold, Steve! The game is punishing you for cheating!

Thank you to Ravensburger for providing a review copy of The Quest for El Dorado: The Golden Temples.

The Golden Temples continues to prove what a strong game systen Knizia developed with The Quest for El Dorado. It's a great game for fans of the original as well as newcomers.