Command your ITEMeeples and save the land from goblins! 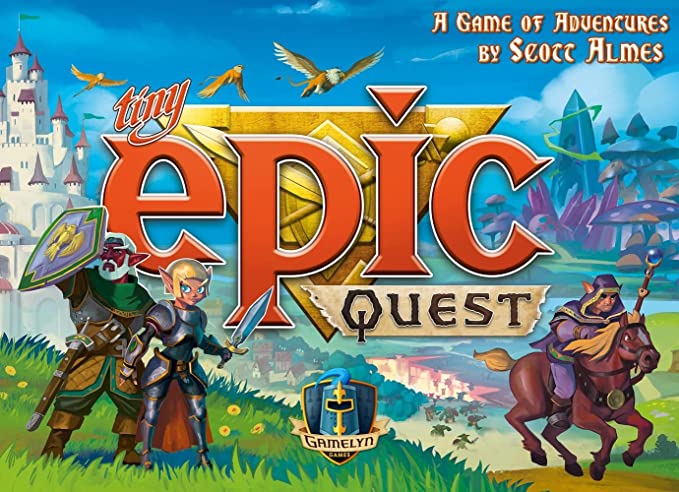 To set up, you’ll create the kingdom by placing the location cards in a specific pattern. The 4 player castles are always in the same spot, but the other locations can change from game to game, which makes for increased variability and replayability.

Each player will place their colored ITEMeeples (henceforth called meeples) in their castle. During the day phase, players will take turns choosing 1 of the 5 movement cards. When a player chooses a movement, she will move 1 of her meeples as the card suggests (diagonally, horizontally, 1 space in any direction, etc.), and then in clockwise order other players will take that same movement for 1 of their meeples. This continues until 4 movement turns have been taken. Some locations grant immediate bonuses, while others have goblins to fight, spells to learn, and temples to explore.

In the night phase, players will take turns rolling the custom dice. Dice rolls initiate goblin attacks, which hurt players; increase the realm’s magic, which can help players learn spells but also make goblin attacks stronger; grant power, which is TEQ’s currency; allow players to progress along temple exploration tracks; and help players defeat goblins. Instead of rolling the dice, players can choose to rest at any time, gaining the bonuses from exploring temples, learning spells, and returning their meeples to their castle.

During the day, players will usually focus on completing a few of the 3 face-up quest cards and getting their meeples set up in locations that support their overall strategy. Completing quest cards provides a special bonus and victory points. Exploring temples unlocks legendary items, which grant lasting bonuses and items that can be equipped to the meeples. Defeating goblins is the surest way to gain victory points, although the only bonus they provide is increasing players’ maximum overall health. Learning spells also awards victory points and increases overall power (TEQ’s currency), which can allow for more flexibility during the night phase.

Speaking of the night phase, that’s where things get interesting with the push-your-luck mechanic. All of the cool things players will want to do require certain results from the 5 dice, but they may also roll goblin heads, which remove their hearts. Worst part? If a player loses all their hearts, they have to retreat everyone back to their castle, and they won’t be able to collect any bonuses from temples they explored or spells they learned. Their health and power also drop back to their starting levels, limiting how much they can accomplish in future turns.

This push-your-luck dice rolling is one of my favorite parts of TEQ. Trying to roll 1 more goblin hit or 2 more torches to explore that temple before you lose your hearts is thrilling. Being too greedy and trying to maximize everything is often a bad idea… unless you’re cracked at dice rolling. Another excellent design choice by Scott Almes was to have the dice rolls affect everyone. Say you’re playing a 3-player game and 3 goblin heads were rolled, then the goblins would attack each player once. Temple exploration also affects all players, so even when you’re not rolling the dice during the night phase, you’re still waiting in anticipation to see what your opponent will roll because it will affect you too!

The night phase is great. I found myself anticipating my opponent’s dice rolls because they affect me, which is a welcome deviation from just waiting for my turn to come around again. The day phase is good, but the night phase is interactive, exciting, and the push-your-luck element is utilized well. Of course, there is inherent dice luck, but there are ways to mitigate it during the day phase so hopefully a few of meeples will be successful on their quest.

The game plays in around 45-75 minutes, which is fine, and it can certainly be shorter if all players know what they’re doing. It may sit oddly with some people spending that much time on a smaller game, but remember that tiny and epic don’t necessitate a short playtime. TEQ feels like it deserves to be this long because you’ll often unlock permanent bonuses via completing quests, and it’s nice to have some time to use those. The pacing is also really good with the shared action-selection during the day phase and the push-your-luck dice rolling that affects everyone during the night phase.

The heavy-hitter components-wise are the ITEMeeples and the many items that slide into their hand-holds. The rest of the components in TEQ are par for the course for Gamelyn: small but quality. Despite the size of the box, I can fit all the components back into it without feeling like I’m playing Tetris to get it all in there. The box lid also doubles as a dice rolling tray with artwork and helpful reminders for the night phase.

Speaking of reminders, the design team put reminders all over the game board and character cards, which makes TEQ an easy game to learn and teach (though the rulebook can be slightly intimidating). The core systems are pretty simple, and the cards almost always walk players through any unique actions they can take.

The magic number for this game is probably 3 players, but at 2 or 4 it’s still quite good. There’s also a solo mode in which you maximize your score to try and beat the game. I wasn’t able to spend a lot of time with this, but it seems like it works well and it’s simple.

The player boards and tiny nature of the markers are my main source of complaint for TEQ. It’s too easy to accidentally scoot the markers away from where they should be, and then I’m left wondering if my max health is supposed to be 7 or 8. Not a gamebreaker, but an annoyance.

Another complaint, though this is more personal preference, is that there’s a lot of white space players have to fill in when completing quests. What I mean is that I’ll come across a quest that says something epic like “Battle the Twin Krakens,” only to realize that in order to defeat these krakens I only need to have 2 meeples on opposite coasts and those krakens are dead. That’s fine, and it helps keep the game simple, but by Davy Jones I’d like to fight those krakens myself! However, overall, TEQ‘s theme comes across very well as you send your meeples around the kingdom, questing, searching for treasure, researching spells, and battling goblins.

Tiny Epic Quest is a tight mix of worker-placement, resource management, and push-your-luck mechanics. If you’re looking for a quest game, this is a good one to try, especially because of the low price point and the simple (but not boring), puzzly nature of the game. It’s an enjoyable experience where players are almost always doing something, and all the game mechanisms work very well together. Check it out if you’re looking for some questing fun!

TEQ is well-polished with some bells and whistles (ITEMeeples), and the push-your-luck dice-rolling keeps things exciting.