Toss a coin to your Tiny Mayor... 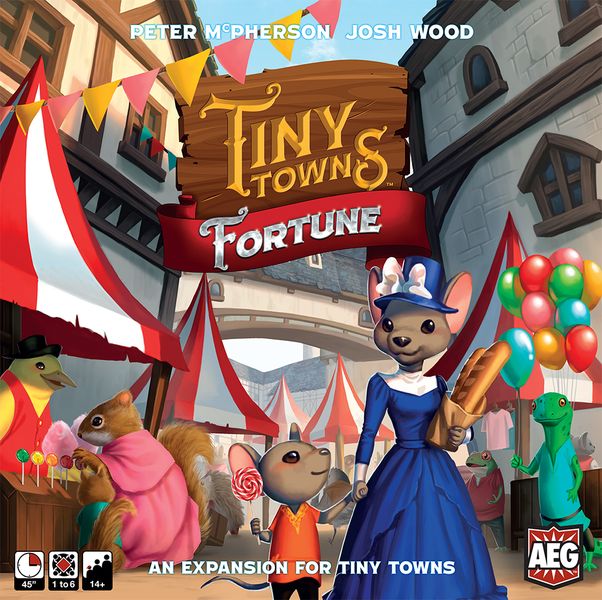 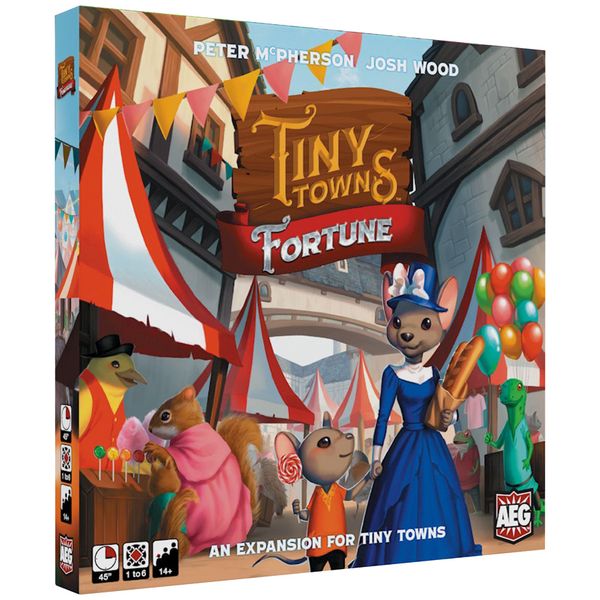 Tiny Towns puts the players in charge of a small area they must build as mayor and city planner. In the Fortune expansion, the animal citizens have started using currency, which gives players more options when building. Fortune also adds several cards, chest boards for storing coins, and physical coin tokens. Read on to see if you’re willing to spend your coins on Tiny Towns Fortune.

Tiny Towns Fortune is an expansion that adds the following to the base game: 1 four-page rulebook, 6 chest boards for storing coins during the game, 10 resource cubes, 12 building cards (2 in each category), 10 monument cards, and one scorepad. The only difference between the old and new scorepads is the row at the bottom for coins. Players are advised to only add up to 4 of the new Fortune buildings to their game, but they can play with more. 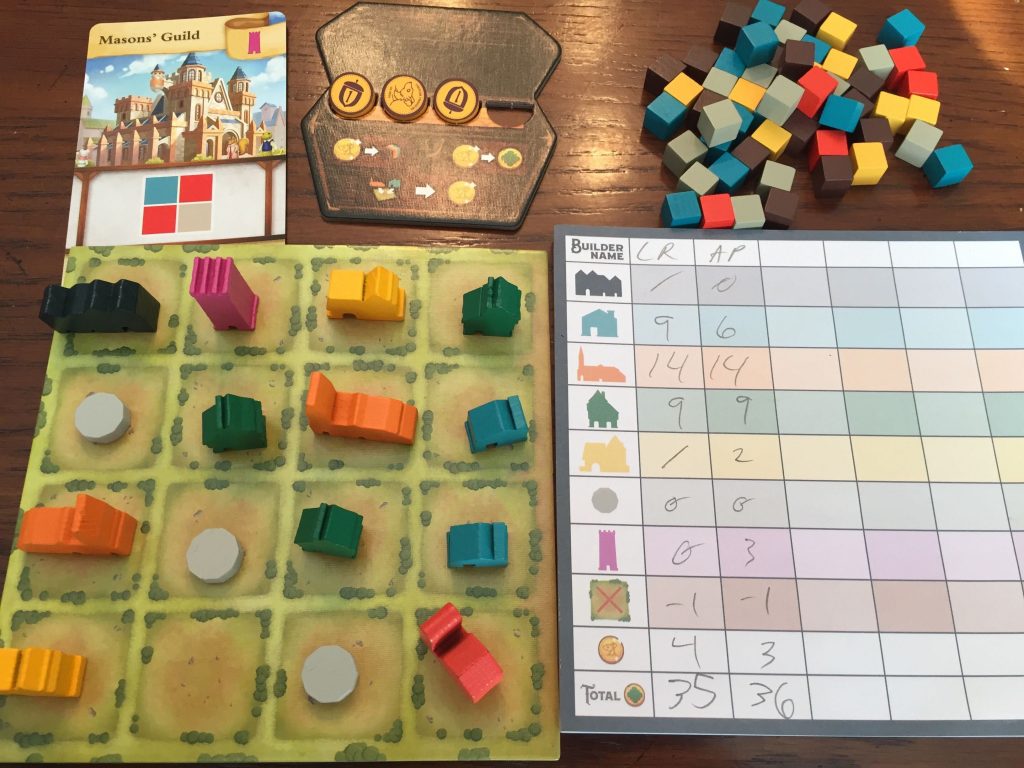 New Monument, Chest board, coins, and score card. Scores shown are the actual ones scored in my first game of Fortune.

Some of the new buildings generate coins, and some of them cost coins to play. Others will give you bonuses if, when you build them, you have a specific amount of coins or certain buildings constructed. The biggest change to the game is that once you have coins, you can spend 1 at any time to collect a different resource cube than the one that the Master Builder (first player) called at the beginning of a round. For this reason alone I’m happy with the addition of the coins, even though usually I’m leery of expansions that add on new rules or twists. Also, the easiest way to earn a coin is to build two buildings on one turn, which is something I never did in the base game.

Many of the new buildings are interesting and I can see how they will integrate nicely with the original deck; some of the standouts include the Mine, Tithe Barn, and Teahouse. A couple are a bit head-scratchy, such as the Jeweler and Oddity Shop. The Jeweler is only worth 4 points at the end of the game, but players must spend a coin when constructing it or everyone else gains a coin at the end of the round. The Oddity Shop is 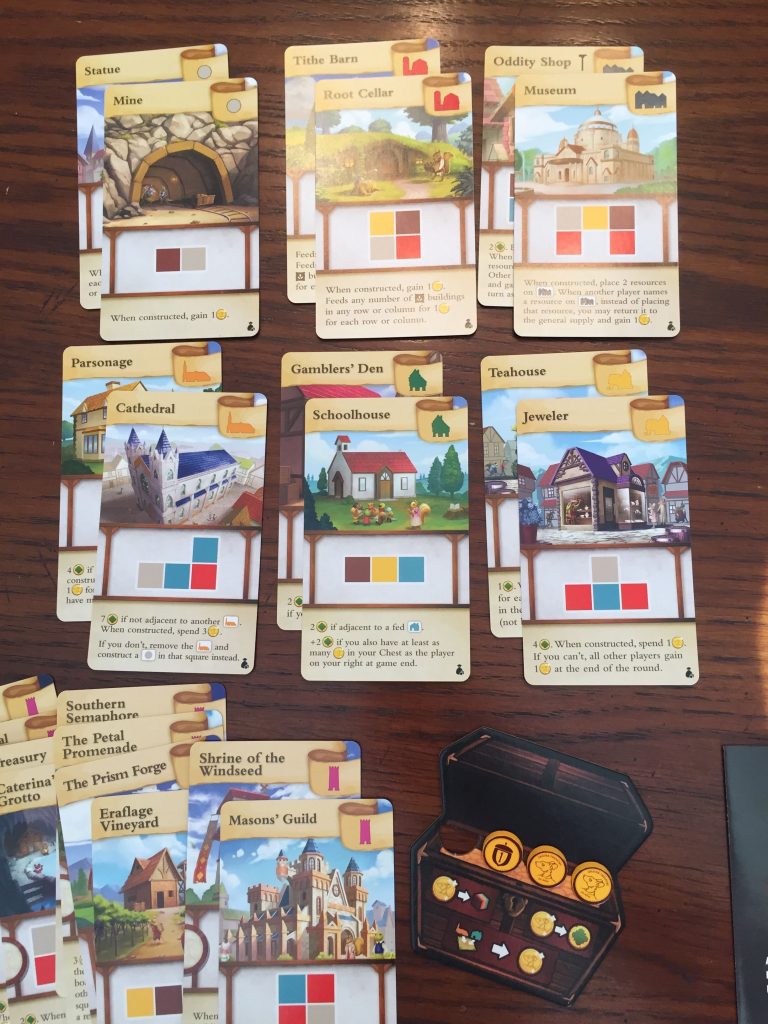 similar to the base game’s Warehouse, but with a twist: the Master Builder can take a resource off of anyone’s Oddity Shop before naming a resource cube, and they also get a coin. I’m not sure I’d ever build an Oddity Shop. It might make more sense if the coin went to the player whose resource was taken. As with my suggestion on the base game’s review, you’ll most likely want to pick and choose several if not all of the buildings you play with, otherwise you’ll end up with a couple that no one wants to build.

The new Monument cards make good use of the coins, giving players large bonuses if they have a full chest of coins when they’re built or at game end. Some of my favorites include Estival Festival, Masons’ Guild, and Southern Semaphore. Estival Festival is worth 4 points and costs 2 coins to build, but makes coins worth double – 2 points each instead of 1 – at game end. Masons’ Guild almost feels overpowered, letting players spend any number of their coins to construct an equal amount of unique buildings. It’s also worth 3 victory points. Southern Semaphore is one of the largest new monuments spanning 3 cubes up and 3 across in an upside-down “T.” It is only worth 1 measly point, but it lets players place a second identical resource when another Master Builder names a resource cube for a round. You have to place this additional resource in your town, but it also gives you a coin. To sum up: it won’t feel fair if you give half the table new Monument cards and half old ones. Best to go all or nothing in this category. 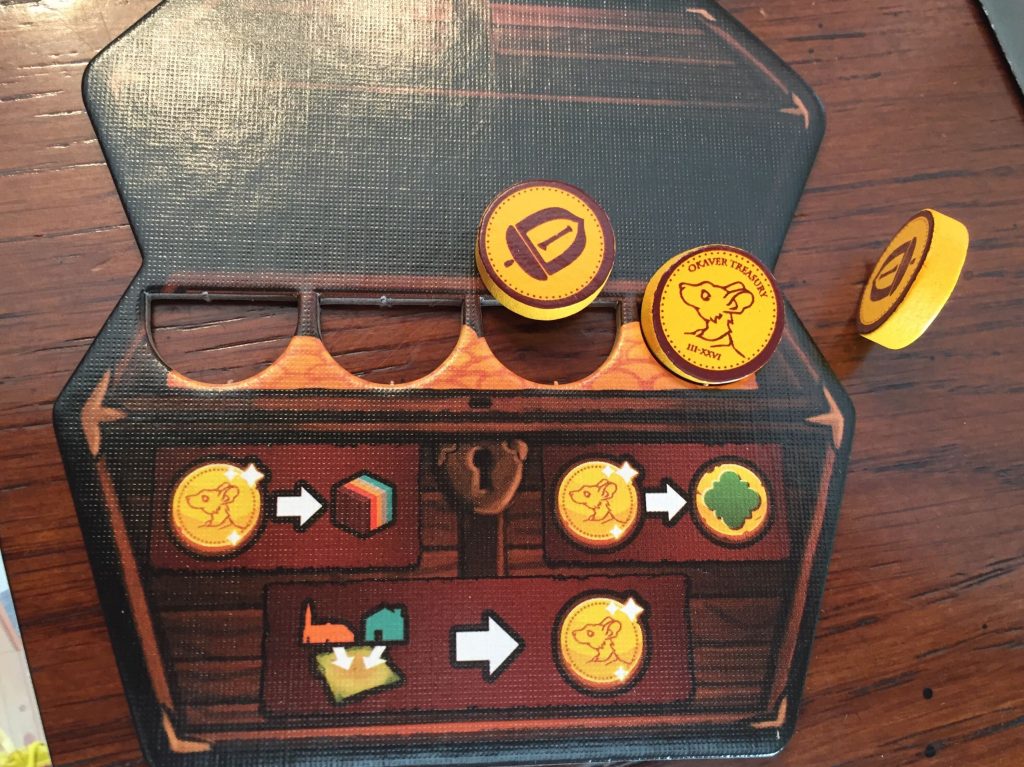 One of the biggest questions when it comes to expansions is, “Is this worth it?” and that answer for Fortune might depend on your mileage with the original, and if it’s beginning to feel stale or not. The chest boards function more as player aids than being useful to the actual game play, as they have four slots for the maximum of four coins you can hold at once, as well as symbols at the bottom reminding you how you can spend them. Essentially this expansion is 22 cards and 30 coins, and if I think about it could have come in a much smaller box.

I enjoy Tiny Towns quite a bit, but if you’re on the fence I’d offer that with a little patience, you could catch this expansion on sale, and therefore not feel like you’re overpaying for a little more of the same cards you already have.

Tiny Towns Fortune adds some new mechanics, coins, and additional cards for any hamlet-building enthusiasts who can’t get enough of the original. It doesn’t reinvent the wheel (which is good) but it also doesn’t give players an abundance of new options, so if you’re on the fence you might wait for a sale. But if you liked the original you should check it out. Also, to AEG’s credit – the expansion fits perfectly inside the original box, without the box lid sitting high or unable to close. Props for that alone!

Tiny Towns Fortune adds some new mechanics, coins, and additional cards for any hamlet-building enthusiasts who can’t get enough of the original. Also, everything fits in the base game's box.