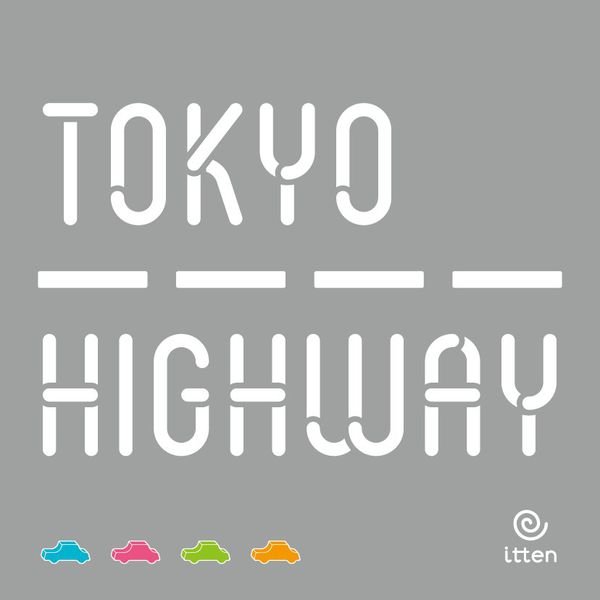 Tokyo Highway puts players in the shoes of traffic planners trying to set multiple elevated highways up in and around the city of Tokyo in the 1960s. Players will used column discs and roads to weave in and out of opponent’s highways, while trying to place all of their cars on the road first. Simple, but eye-catching, read our review to see if Tokyo Highway is worth a Sunday drive or not!

There isn’t any questionable content in Tokyo Highway, unless you’re offended by motor vehicles or feats of urban infrastructure.

After World War II, Japan experienced a huge urban revival and increased demand for automobiles. In response, the Japanese government constructed a series of interconnected coastal highways and expressways that by 2012, totalled over 6,000 miles of roads. Tokyo Highway places you in the shoes of an urban planner trying to build a series of roadways in and among Tokyo, as well as other roads being built by your competitors.

While the game isn’t complex by any means, it’s simple design hides deep possibilities for strategy. On your turn, you’ll place a new column and road. The column has to be +1 or -1 in height, unless you use one of your rare Junction pieces (more on that later). If you crossed over or under any opponent’s roadways, and are the first to do so, you can place one of your cars on your road. The first player to place all of his cars (thus showing he built the most efficient roadway) is the winner.

Junctions are special yellow column pieces that allow you to do a couple things: One, you can build them at any height, so they’re great if you want to jump up or down quickly with your roads, but players need to keep in mind that too steep of a road won’t hold any cars—they’ll slide right off. The other thing Junctions let you do is build a second road off of them, making a “Y” road. You still only get to place one road per turn, however.

When placing roads and pieces, players will inevitably start working in close proximity to one another, given the nature of the game. When this happens, should a player knock down anyone else’s pieces, he must pay for his mistake in the form of building materials—one for each piece of road or car knocked down. This is also probably why a plastic pair of tweezers is included in the game, but I found them more cumbersome than helpful most of the time.

That’s all there is to it, and despite having great table appeal, I feel as though the $50 price tag will more than likely have most players waiting for a discount or clearance sale before giving it a try. It’s a very fun game with high replay value, assuming you have the patience for carefully placing the pieces and no one goes, “Hulk Smash!” on the table after dropping a particularly ill-placed road (thanks, Levi).

But in the end, you have to decide if it’s worth it for 40 tiny wooden car meeples, a bag of column discs, a bag of grey popsicle sticks, and 4 grey building blocks (double meaning—the large blocks are there to represent downtown buildings). For me, getting a review copy was good because I wasn’t sure I wanted to spend my money on it, and after playing it I’m not sure it’s worth the full MSRP.

Tokyo Highway is fun to play, has amazing table presence, and is a rare game that made me want to do a little more research to learn about it’s inspiration and history. But I don’t think $50 is an appropriate asking price for a box of grey shapes and popsicle sticks. The gameplay itself often boils down to a more complex take on Jenga, but with a higher price tag. Much like the expressways it is inspired by with their toll booths, this Highway comes with fees attached.

Much like Jenga or The Climbers, your mileage for this dexterity game may vary. But if the price is right, you will have a lot of fun and high replay-ability in this clean, quick, road-building game.