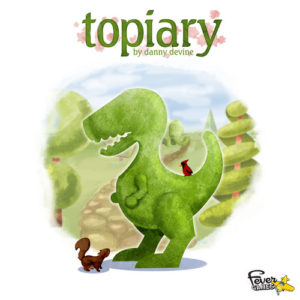 Topiary is a light abstract game for two to four players. With a family-friendly theme on top of a simple tile-laying system, it works well with gamers of all ages.

Topiary is Renegade Game Studios’ first release of 2018. In this charmingly-illustrated game, two to four players are visiting a garden with lovely, sculptured trees in the shapes of swans, dinosaurs, and gamer-appropriate icosahedrons. (If that word is not in your vocabulary, then you clearly need to play more Dungeons & Dragons.) Players try to position their pieces to get the best views of the topiary trees and score the most points.

The game is played out on a five-by-five grid of tiles, each showing a particular type of tree and a number between one and five. The number represents the relative height of the tree—one being the shortest and five being the tallest. The center tile begins face-up, and all other tiles begin face-down. Each player then receives a starting hand of three tiles and a number of so-called “meeple” pieces. When the play area is set up, it will look something like this: 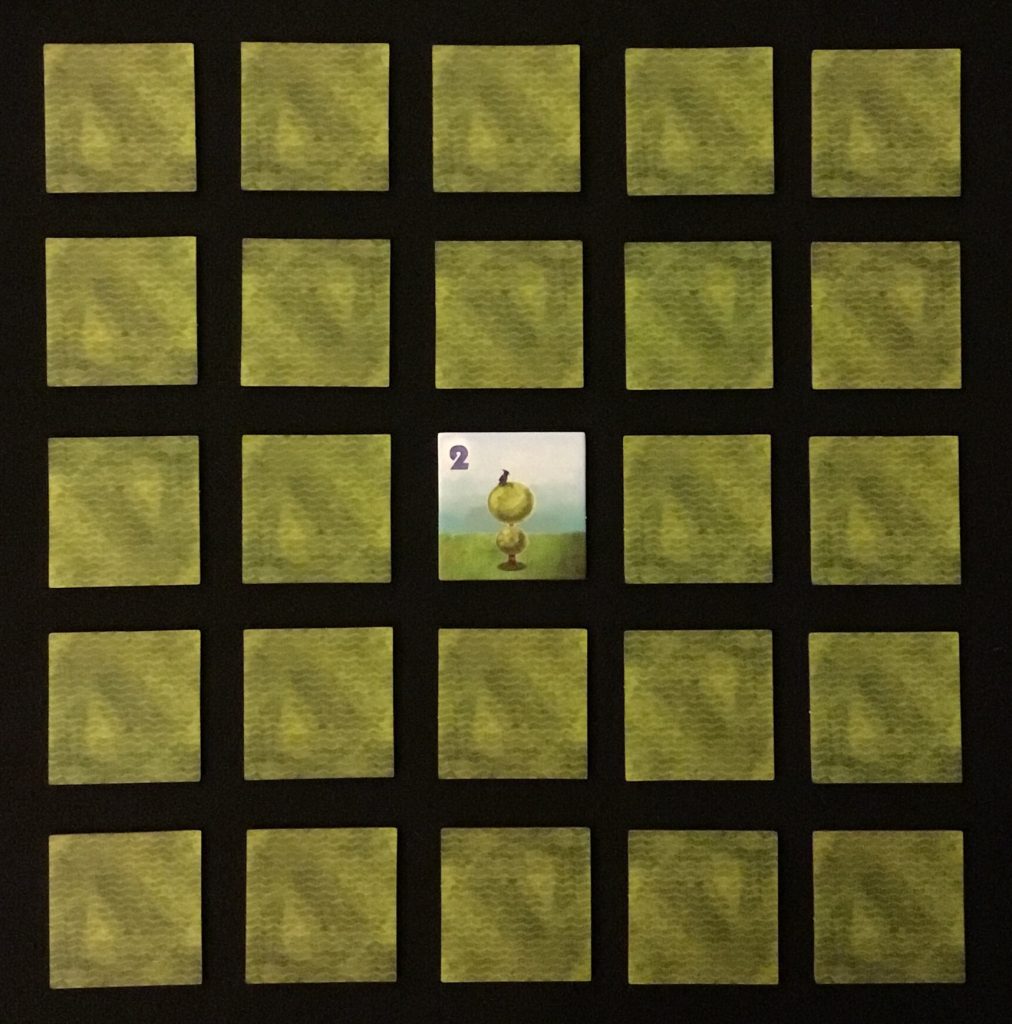 On a player’s turn, he begins by placing one of his meeples around the outside of the grid. These pieces must be placed adjacent to a tile, either on a side, looking down a row/column, or on a corner, looking down a diagonal. When scoring occurs at the end of the game, each meeple’s view will be evaluated, its owner scoring points equal to the total height of the trees it can see. For example:

The pictured meeple can see the three closest trees, because they continually increase in height. In order for a tree to be visible, it must be taller than anything before it in the meeple’s line of sight. This means that, in the above image, the leftmost tree is blocked by its neighbor, because they are both the same height; it would have to be a “5” to be visible.

In this example, the total point value of the visible trees is seven (the sum of their face values). However, players also get a bonus if their piece can see multiple trees of the same style/design. Two like trees are in this meeple’s view, earning the player two bonus points in addition to his regular score. In total, this meeple would score nine points.

After a player has placed a meeple, he may then pick up any face-down tile in its line of sight. This tile is added to the player’s hand, and the player must then replace it with one of the four tiles they now hold, face-up. 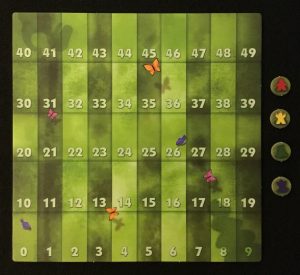 Once everyone has placed his last meeple, the game ends and points are totaled, as described above. Players can also earn a small bonus for tiles remaining in their hands.

For being such a cute-looking game, Topiary can be pretty mean. Frequently, situations arise where players find themselves saying, “That’s a pretty nice line of tiles you’ve got there. Wouldn’t it be a shame if someone… messed it up?” I personally enjoy games that allow players to be cutthroat, but I know not everyone does. To that end, I think Topiary works well, because it doesn’t force players to be aggressive, but it leaves the opportunity open for jerks like me.

In contrast to its overall simplicity, this game gives players an unexpected amount of choices. Early on, when the tiles are mostly face-down, there are not many factors to consider. However, as more information is revealed, players really have to weigh their options based on where their pieces are, where their opponents’ pieces are, what’s in their hand, and how they can manipulate the board-state to maximize points. For a game that basically boils down to “place a meeple, place a tile,” there is a lot happening underneath.

Topiary looks nice on a table. The art is cheerful and attractive, and each player’s meeples are a unique design. Though entirely unnecessary, it’s a welcome touch. Furthermore, I appreciate the inclusiveness of having female meeples and meeples in wheelchairs.

Overall, I liked Topiary. It’s not my favorite tile-laying game ever, but it has some neat ideas. Playing in ten to fifteen minutes, it scales nicely and is easy to learn and understand. I’m not sure how well it will hold up long-term, after repeated plays, but it is certainly a strong offering from Renegade. I recommend trying it for yourself!

And, as an excuse to use this word again, here are five icosahedron-trees.

A review copy was provided by a Renegade Game Studios.

Topiary is an enjoyable experience, one that distinguishes itself from other abstract and tile-laying games. It is simple, but offers more strategy than players might expect.