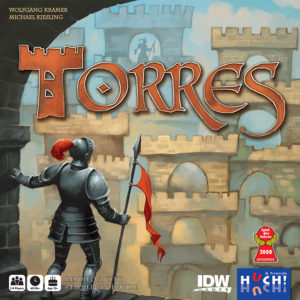 Torres is a 1999 release from game design duo Wolfgang Kramer and Michael Kiesling. In 2000, this midweight abstract game won the Spiel des Jahres, and in 2017, it was republished in new version from IDW Games.

Torres has no objectionable content, but it may be a bit challenging for younger kids to grasp.

Wolfgang Kramer and Michael Kiesling have had long, prolific careers as game designers. With dozens of published games and countless awards, they are a dream team. Kramer and Kiesling have won the prestigious Spiel des Jahres numerous times, including in 2000 for their abstract game Torres. I’ll come right out and say it: Torres is one of my top ten favorite games of all time. It’s a masterpiece.

Torres is a game for two to four players, most recently published by IDW Games. The goal of the game is to score the most points, which players mainly accomplish by building three-dimensional towers on the square grid.

A game of Torres lasts three rounds, with each round consisting of a few turns. At the start of the game, eight tower blocks are placed on the board, and as the game progresses, there must always remain exactly eight towers. This means as the towers grow and expand, they may never merge. Each player places a pawn on the board, and the King pawn is placed on one of the tower blocks (more on him later). 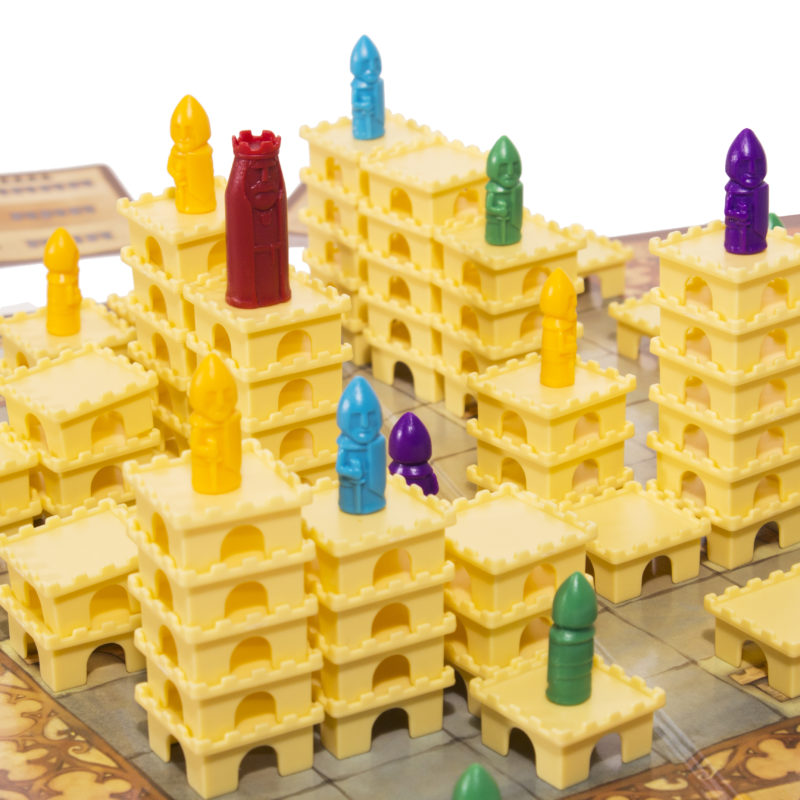 Players have five action points to spend on their turns. The actions may be spent to:

One of the driving rules of the game is that a tower may never be taller than its base area. In other words, if a tower covers four board spaces, it can never be taller than four blocks high. Should a player want to make the tower five high, he must first add a tower block to expand the base area to five spaces.

After each of the three rounds of the game, there is a scoring phase. Players score points based on where their pawns are on the eight towers; the higher they are, the more they score. To determine how many points a given pawn scores, players multiply the tower’s base area by what “level” the pawn occupies (how high up it is).

As an example, suppose a tower’s base area is five spaces. At its highest point, the tower is four blocks tall, but a player’s pawn is only on the third level. That pawn would score fifteen points. Had it been on the highest level, it would have scored twenty.

If a player has multiple pawns on a tower, he only scores for the highest one.

During each of the scoring phases, players may also receive the King’s bonus, in addition to their normal points. The King pawn, placed at the beginning of the game, is not controlled by anyone—he kind of just sits on one tower space each round. If a player’s pawn ends a round on the same level of the same tower as the King, that player receives bonus points. The amount received increases each round, and multiple players may receive this bonus.

I mentioned above that players may spend an action to move their score marker one space along the score track. In the grand scheme of this game, one point is not worth that much, so this action is usually only executed in the rare instance when a player has nothing else he wants to do. However, there is an interesting facet to Torres‘ scoring that makes this action very tactical: no two players may ever have the same score. If a player’s score marker would be moved onto a space with an opponent’s marker, it is instead moved again, to the first available space ahead of the opponent. If used at the opportune moment, this can be a very strategic maneuver.

At the end of the third round, the player with the most points is the winner.

I’m glossing over a few details here, because I’d like to spend time focusing on why I love this game so much.

In a game with action point allowance, a sign of good design is when players feel like they don’t have enough actions to do everything they want to do. How many times have you played Pandemic and thought, “If I had just one more action…”? Being strapped for action points makes for interesting decisions, because you have to weigh the importance of limited choices. If you could do everything you wanted to, these kinds of games would cease to be challenging.

Players always seem to be one action point short in Torres, and I love that about it. There are so many decisions to be made at every turn that the game becomes a literal multi-level puzzle. Torres includes ten one-time-use cards per player that provide special, rule-breaking actions. Once per turn, a player may spend one of these cards to do things like move diagonally, take extra actions, place extra blocks, jump up an extra level, etc. Even without these abilities, the game would be tight and strategic, but these cards ramp things up immensely, throwing a staggering amount of choice in the mix. A perfectly-timed special action card can be devastating.

(As a side note, I recommend always playing with the “advanced rules,” in which players begin the game with all the action cards of their color. This removes the “draw a card” action and makes the game purely skill-based, with absolutely no luck whatsoever.)

Torres asks players to strike a balance between furthering their own interests and counteracting opponents’ strategies. Even though the game has no attacking or combat, it feels like a knife fight as players grapple for the top spots of the towers.

I’ll admit, this game can slow to a crawl in the last few turns. By the end, analysis paralysis sets in big time, even to those who usually play games quickly. As the towers get tall and the points get substantial, the moves become painstaking. Moreover, it is difficult for players to plan their turns ahead of time, because the board-state will change drastically from one turn to another. If you’re interested in Torres, this is definitely something to be aware of. 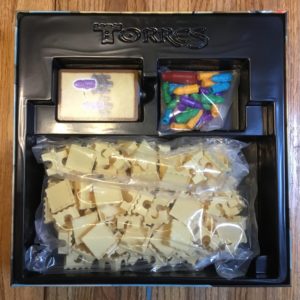 Visually, the game looks great. Every version of Torres features beautiful artwork and components, but I have some small quibbles with the new IDW version. First, the box is a bit oversized for the contents. The insert is nice and functional, it just didn’t need to be in a Ticket to Ride-size package. Moreover, the player pawns, while nicely sculpted, feel a bit cheap, and they fall over easily. I prefer the sturdy, tactile wooden pieces in the older versions, personally. Additionally, though the cards are good quality, with a nice linen finish, I wish they still spelled out exactly what they did, instead of relying on symbols which have to be cross-referenced with the player aid—I get that this is a language-independence thing, but it just gets annoying to have to keep looking at the aid. It also would have been nice to have one player aid per person, instead of one single sheet for everyone to share.

Despite these minor issues, the IDW version is nice, and you definitely get a solid product for your money. More than anything, I’m just glad to see this great game back in print.

To me, Torres feels timeless. It has that old-school euro/abstract flavor. This game is a product of yesteryear, when games didn’t need tons of moving parts or chrome to be great. Torres is not the easiest game to teach, but after a turn or two, things should start to click for everyone.

As much as I sing the praises of this amazing game, I don’t think it’s going to be for everybody. Torres is definitely a “gamer’s game.” It demands a lot of brain power from players, so folks who prefer lighter, pick-up-and-play-style games might want to give this one a pass. However, for people interested in exploring meatier abstract games, or just looking for a tactical strategy game with a “classic” feel, Torres is an amazing experience.

A review copy was provided by IDW Games.

In my opinion, Torres is one of the greatest games ever made.