A Parks game from Keymaster Games 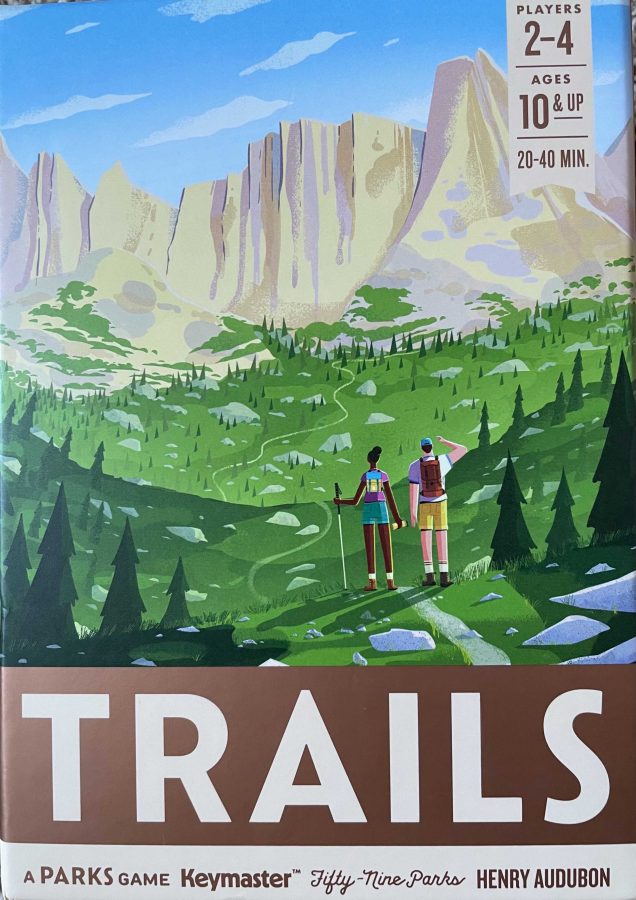 Trails is the latest release from Keymaster Games, who published the popular Parks a couple years ago. Full disclosure, I haven’t had the pleasure of checking out Parks, but Trails feels like a standalone game that streamlines the experience from what I understand. In Trails, players take on the role of hikers trekking different national parks, represented by different tiles. As they make their way back and forth along the trails, the slowly setting sun will make each park an even better stopping point, but sunset also brings the game closer to the end. So is it a walk in the park or a rock in your shoe? Read on!

The play area in Trails is 5 parks, placed randomly, bookended by the trailhead and trail end tiles. Certain actions like turning in Badges are only available at the trailhead/end tiles. Likewise, players can only refill their canteen at the trailhead, and only the trail end tile triggers the sun’s movement. Players will take turns moving 1-2 tiles, or as far as they want in the direction they’re facing if their canteen is full (moving this way drains the canteen). When a player lands on any of the trail tiles, they either gain the indicated resources or take the indicated action. One tile, for example, lets players exchange resources, while another lets them take photos. The night side of each tile is revealed as the sun token moves off of it and onto the next tile, revealing more resources or better actions. The sun’s movement is triggered by someone reaching the trail end. Also, players may encounter wildlife (represented by the bear meeple), which will allow them to roll the wildlife die and get a bonus action based on where the bear goes next.

This is a chill game. The biggest stressor is trying to maintain enough acorns, rocks, or leaves to claim some of the bigger badges, which provide better rewards. Even if a badge someone is going for gets claimed, a new one usually takes its place that requires some of the same resources, meaning players won’t get hosed too badly. (And if they do, they can just stop by the park that allows them to exchange resources.) Trails is very much not a “take-that” game, which is great for folks who aren’t fans of that style or prefer more relaxing games. It’s also a small game, both strategically and physically (the box fits in the flat of my hand and fingers), but it still has a lot to offer.

The art in Trails is great, and I love seeing the different vistas in the park tiles and photograph cards. Flipping over the park tiles to the night side is great too as it reveals new nighttime scenes that often elicit an audible “oooh!” from players. I also love how the tiles flipping over is a visual clue to players that the game is shifting. It makes it easy to track how much longer the game is going to last as the sun literally sets in the game. Even a player who wasn’t paying attention during setup and explanation can take one glance and see, “yup, game’s almost done.”

Having not played Parks, this game reminded me a lot of Trekking the World in that they both have beautiful games that made me want to learn more about different places around the world, and scratched a bit of that armchair wanderlust in anyone who’s enjoyed different media about travel. Trails is a fun, beautiful game that is easy to get to the table. If you’ve been stuck inside for a while, or just love a good hike, you should definitely check it out.

Trails seems like a streamlined version of Parks, and has some neat mechanisms that make it fun to play and easy to see the end of the game coming.