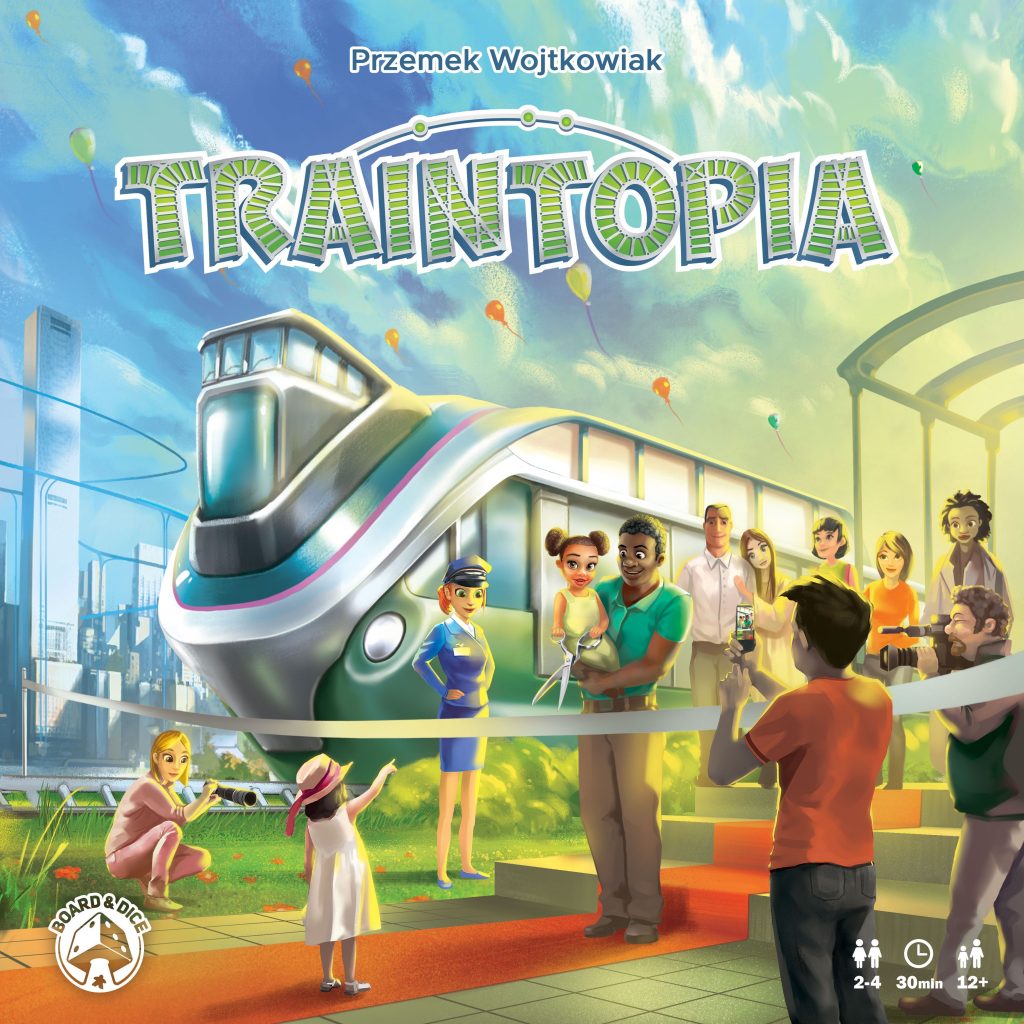 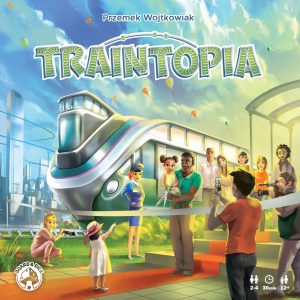 Traintopia is a drafting and tile-laying game of railroad construction. In this game, players build individual tableaus of rail lines and attractions in an attempt to earn the most points. Each tile has features that make it useful, so players must constantly determine how to make the best use of what is available (and prevent their opponents from doing the same!). It is an enjoyable game for families, but its euro-style strategy makes it a good choice for gamers, too.

Drafting and tile-laying are two mechanisms I really enjoy. Many games have used these systems together, often to great success. Traintopia is the latest such game from Board&Dice, a company known for making robust strategy games.

In Traintopia, players build individual tableaus of connecting rail lines. Each round, a number of components are displayed in the common play area, and players take turns choosing components to add to their personal tableau until there is only one left to choose. The last component each round is discarded.

The goal of the game is to earn the most points. The primary ways players earn points are by creating train lines, adding features to them, and fulfilling objectives. To set up the game, each player receives a starting tile, along with two additional tiles that they draft. 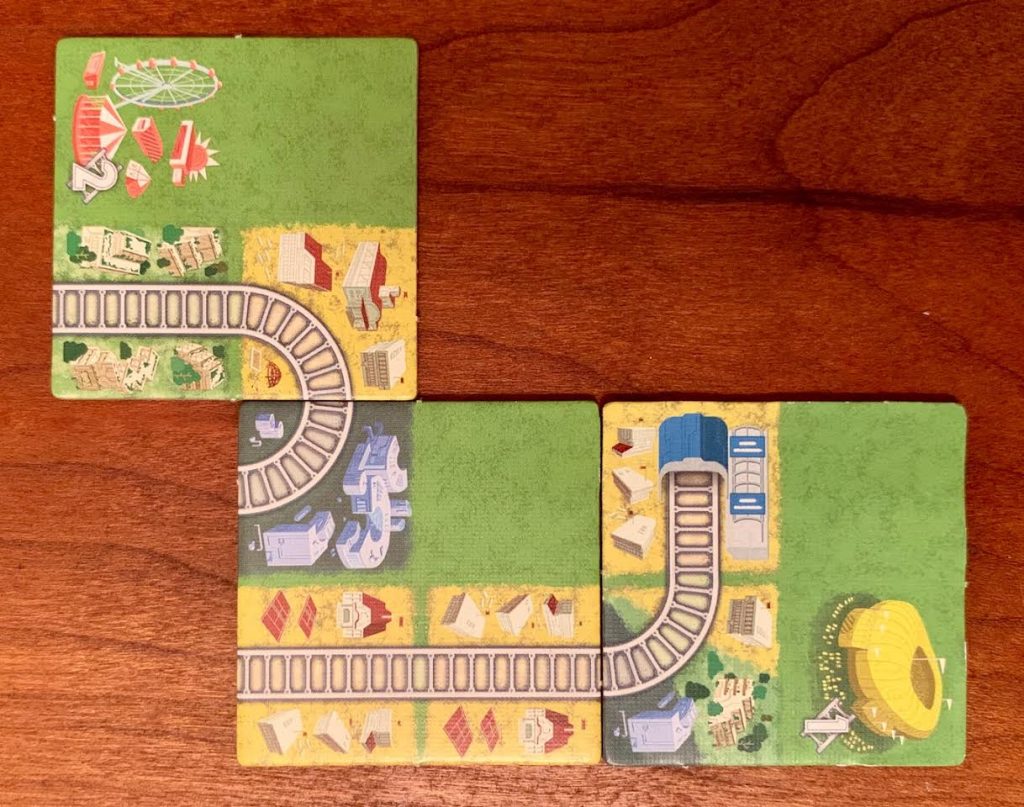 Notice that tiles in a tableau can be placed flush with other tiles, or staggered “on the half,” as shown above. At the start of each round, players flip a card, which determines the pieces that are available to be drafted. For example:

Here, players can choose from any of the six tiles, the two meeples, and the train piece. Tiles must placed in a player’s tableau so that train tracks line up; a track can never run into a “dead end,” where it can no longer expand. In order for a track to be considered complete, it must start and end at a station. To illustrate: 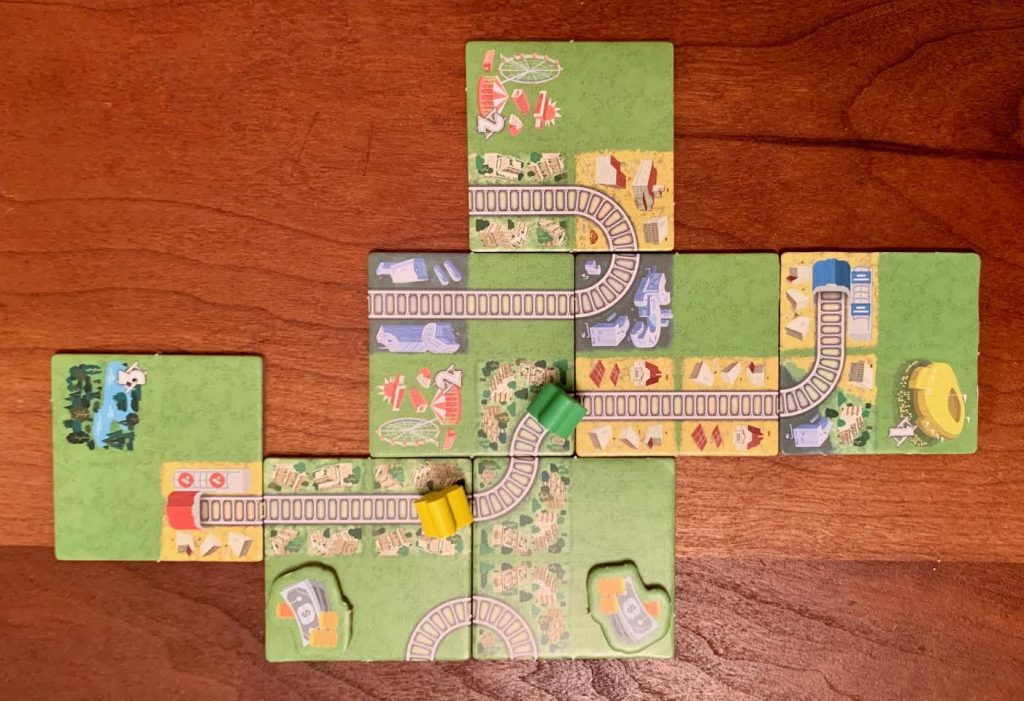 Notice that the completed track above has two meeples on it; these are passengers. Whenever a passenger is drafted, it is placed on a train line and the player earns points equal to the number of spaces of the passenger’s color on that route. As an example, if a green meeple were placed on a route with four green spaces, the player would earn four points. There can only be one passenger of each color per line, though, so players need to be strategic about when they draft them and where they place them.

Speaking of money, when a player takes a tile with the money symbol, he/she immediately places a matching token on it (there are two in the tableau shown above). Money can be spent to buy bonus tiles, to switch objective cards, or to change the color of a meeple, which allows a terrain type to be scored twice on the same route.

Objective cards vary in point value according to their difficulty.

Players continue flipping round cards and drafting components until all the round cards have been resolved. At this time, players determine their final scores based on their completed routes, leftover money, and objective cards. Based on the number of players, bonuses are also awarded for the longest completed routes. The player with the highest score wins!

At first glance, Traintopia doesn’t look like much. The box art is fairly run-of-the-mill and the components look like they could be from any of a hundred games. When I first played it, however, I was immediately surprised by how many considerations there were to make. With nine or ten pieces up for grabs each round and potentially dozens of different ways to position them, players really have to analyze their options.

Even though the game only takes about a half-hour to play, it still feels like a “full” experience. The first time I tried it out, my opponent and I immediately said “let’s play again,” because we felt like we had a handle on the game’s nuances and wanted to explore them further.

Traintopia has a few notable issues, however. First, there are insufficient train pieces in the box. The game should include as many as there are round cards that require them, but such is not the case. Players can easily run out mid-game and be stuck having to use a substitute.

Second, the rules are unclear about when the bonus cards are scored. My “gamer instincts” feel like they are supposed to be scored at the end, but it’s not clearly stated anywhere.

Still, at its core, Traintopia is a nice gateway-plus game. These production issues, however odd they might be, are all surface-level. In terms of the game itself, it is an enjoyable experience with shades of euro design. It is certainly not perfect, but it is worth a try.