Trek if you want to; Trek around the world 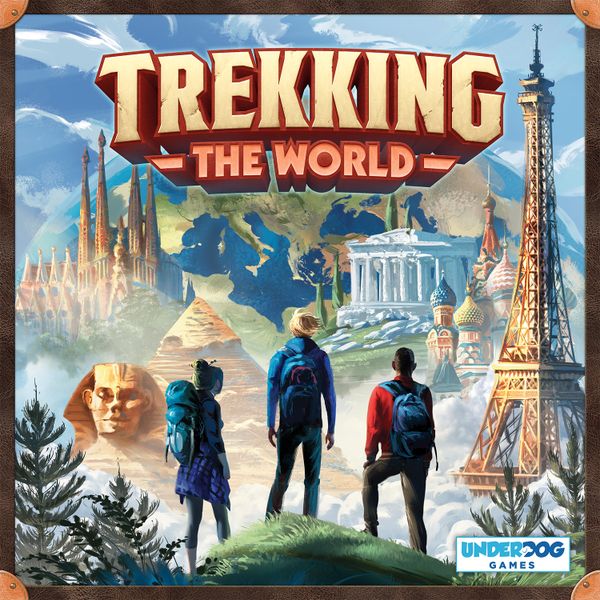 In 2018 Underdog Games released the 2nd edition of Trekking the National Parks. That game took players all over the United States’ National Parks, collecting points and visiting unique locations. Trekking the World takes that idea internationally, as players trot the globe in search of new and exciting locales to tour, while picking up souvenirs along the way. Pack your bags, we’ve got a lot of ground to cover!

Trekking the World sees 2-5 Trekkers, each with their own unique meeple, trying to see the world while collecting Destination cards, souvenirs, and victory point tokens. Players do so by performing a Move and an Action. If a player starts their turn on an Airport, they may fly to another unoccupied Airport. Should players not have any Trek cards, they don’t move and instead have to spend their turn taking the Draw Two Trek Cards action. If they have Trek cards, they must play one or more of them to move to a location.

Moving has specific constraints – a player cannot move through or next to an opponent. Also, players cannot use a single connection more than once in a turn, and they cannot partially use a Trek card. This means that if a player uses a 3 card, they must move the full 3 spaces. While these rules felt odd I appreciated them as my time in the game went on, as they kept players on their toes and made them choose specific movements rather than sloppily going back-and-forth to land precisely on a spot. 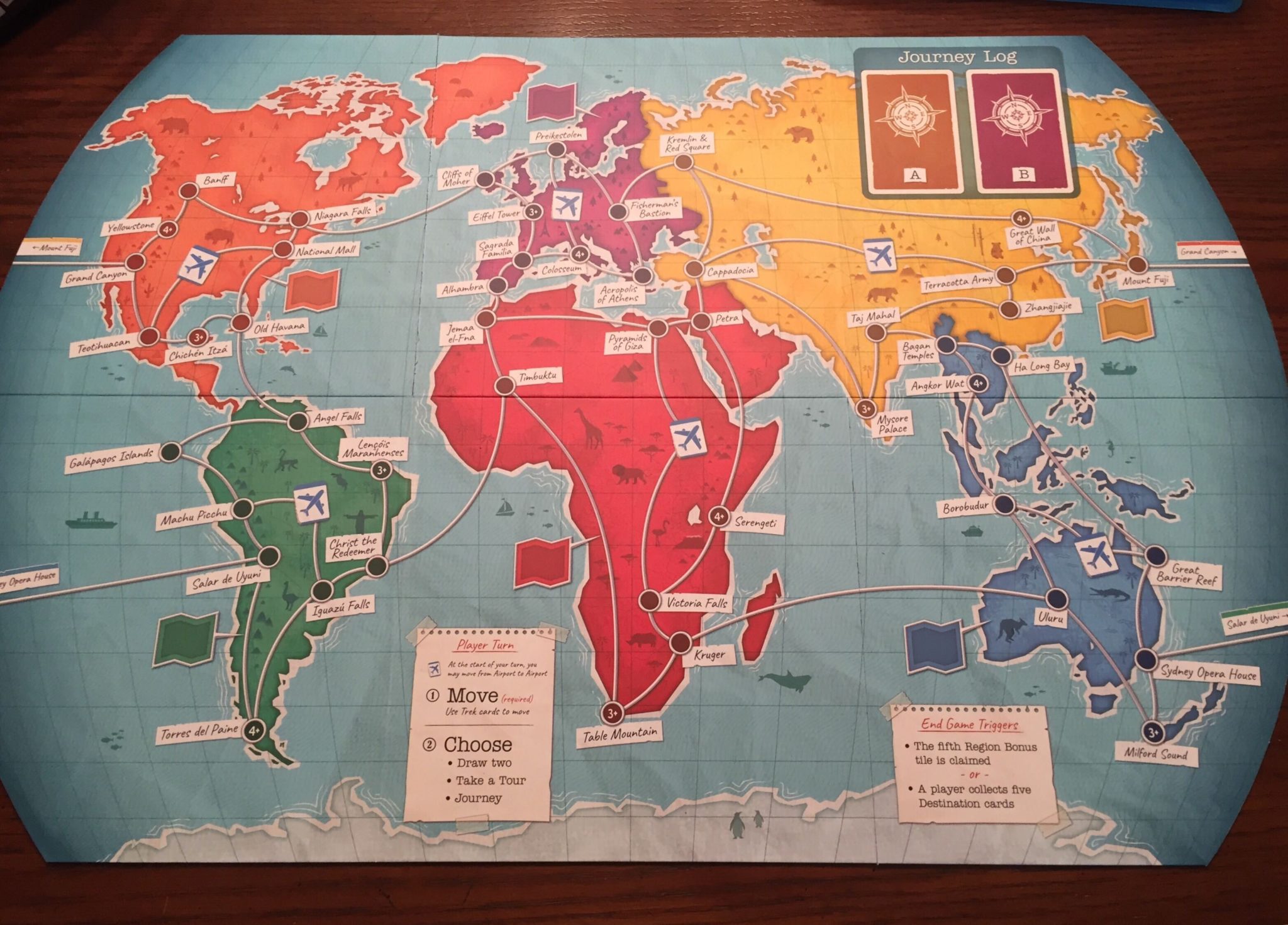 The game board has curved edges. How cool is that?

Once the active player’s movement is done they must choose to either Draw Two, Tour, or Journey. Taking a Tour requires them to be at one of the four Tour cards currently out on the table, and to have to required Trek cards to claim it. The push-pull of using Trek cards for both movement and currency has a light strategy feel that I appreciated. Sure, you could empty your hand of Trek Cards to sprint across the map, but you only get the souvenir cube from where you stop, and getting there first means nothing if you can’t claim the Tour. The Journey action is dictated by whatever two Journey cards were picked at the start of the game; there are 6 for both the “A” and “B” cards, and whichever is chosen stays out for the whole game.

Players may discard two matching Trek cards of the same type to use a Journey card. Depending on the card they may grant extra Victory Points, movement, reduce the cost of a Tour, or allow the active player to switch spots with an opponent. That last one is the closest thing to any kind of “Take-that” moment in the game, outside of someone swooping in and stealing a Tour out from under you (Thanks Levi). 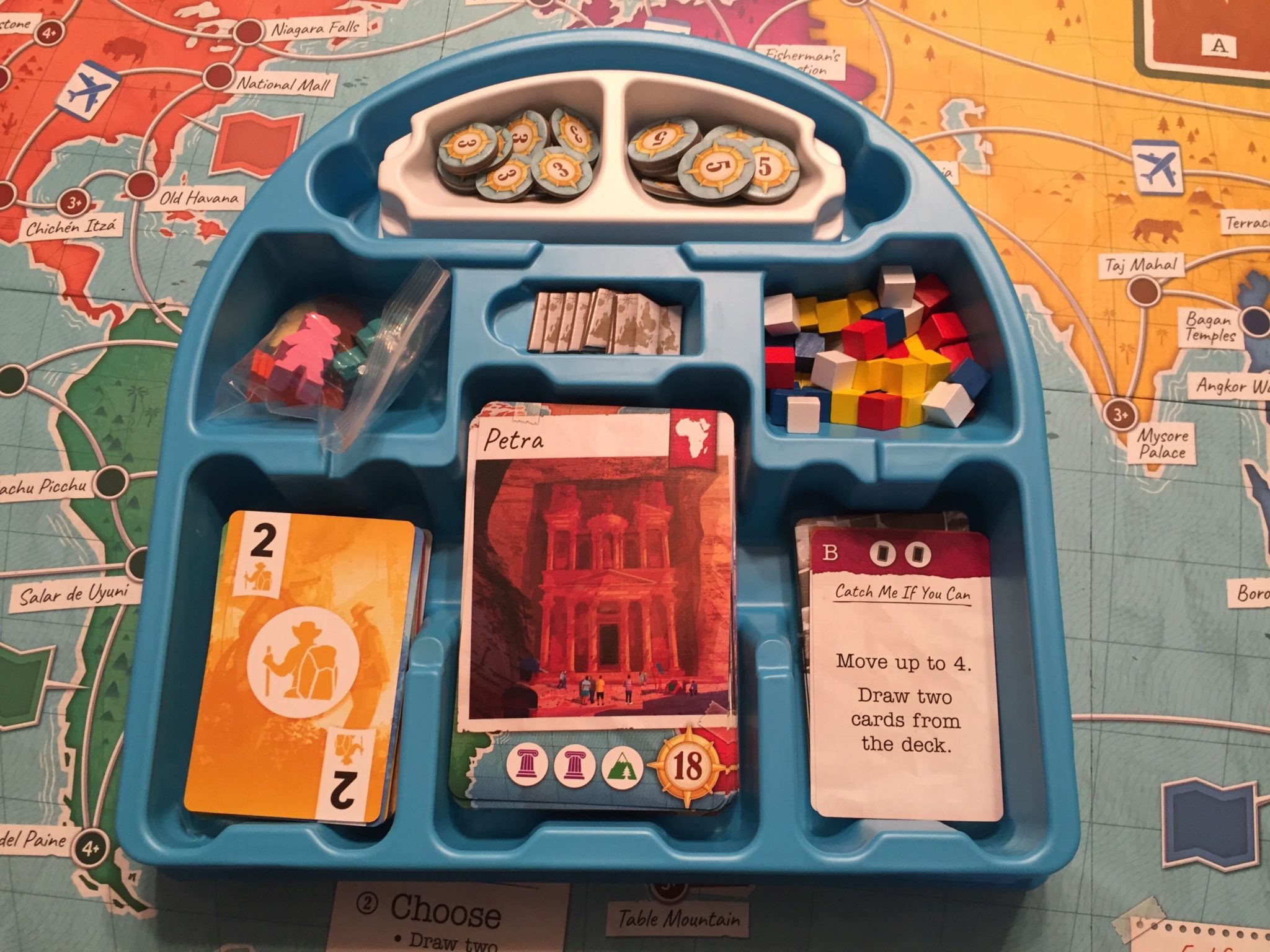 This insert is actually really nice!

Players collect souvenir cubes in red, yellow, white and blue to represent clothing, crafts, postcards, and figurines, respectively. Once players have two cubes of any color they can claim the “most” bonus card, which is theirs until someone else surpasses them. Bonuses are given at the end of the game for each complete set of all four colors that players finish with. Region bonuses are also passed out to the player who takes the last souvenir from a region, encouraging players to go after more than just Tours.

My suitcase at the end of the game. I scored 17 VPs thanks to my three full sets of souvenirs. The other side of the suitcase is for 2 players, and has lower bonuses for complete sets.

Trekking the World is my favorite kind of trip – the kind where you still get to sleep in your own bed!  Each oversized Tour card has beautiful artwork, and a small paragraph on the back if you want to learn more about a given location. My only gripe with them is I wish they had a specific mark or star on them instead of just the region, so when they’re lying in the Tour queue it would be easier to spot them on the board. When the game starts many of the locations are obscured by the souvenir cubes.

This is all minor and didn’t detract from the game – but it did make me learn some geography, which isn’t a bad thing. Trekking plays out like a combination of Ticket to Ride and Tokaido as players globetrot and collect trinkets. Even when the game was over, it was fun to sit back and trace my Trekker’s epic trip. If you’ve been itching to go somewhere but for some reason or another can’t make it past the sofa, you definitely should check out Trekking the World. 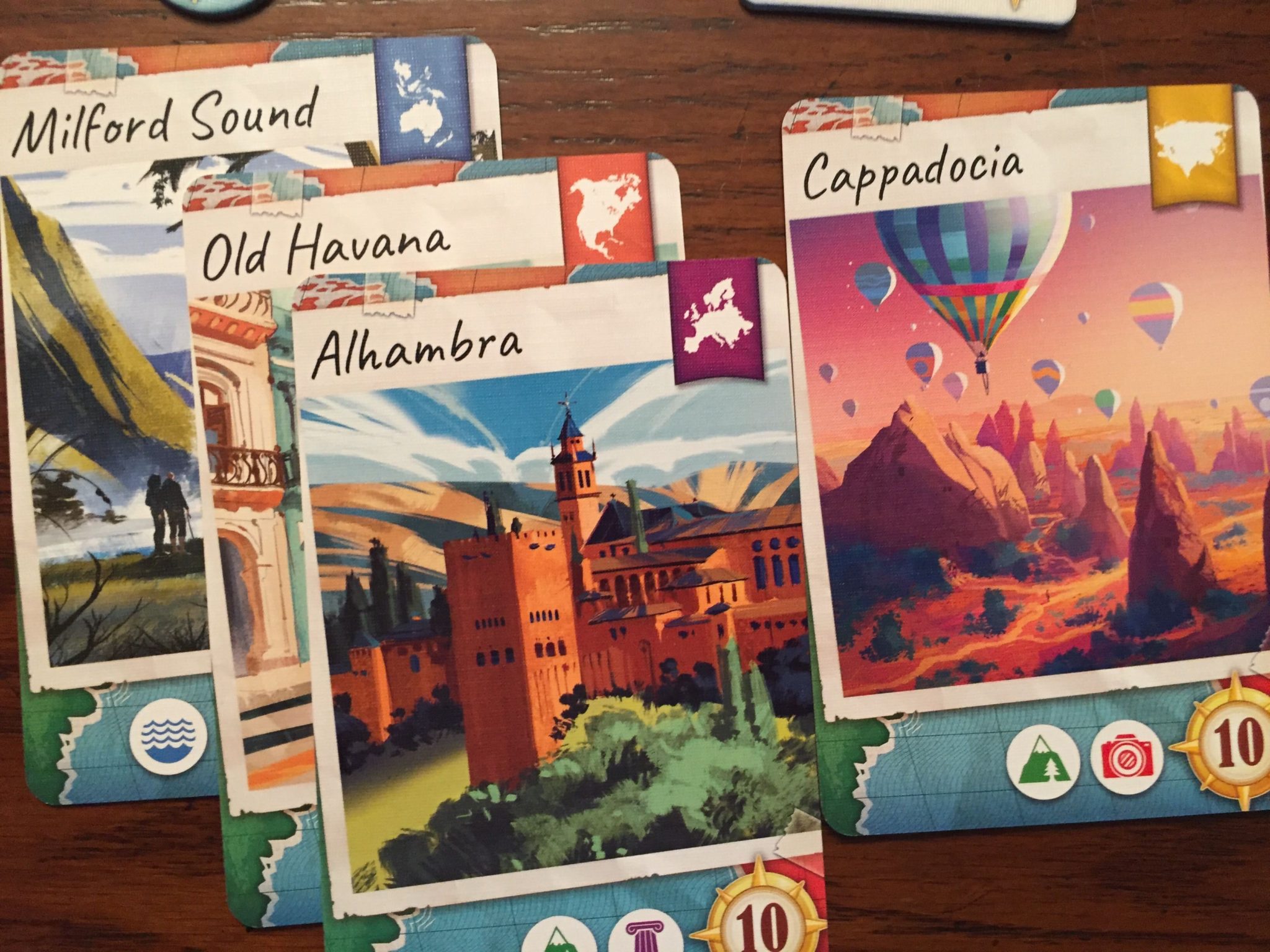 My first world tour: Started in Australia, a trip through South America stopping in Cuba, a flight over to Alhambra before ending with a balloon flight over Cappadocia.

If you’ve been itching to go somewhere but for some reason or another can’t make it past the sofa, you definitely should check out Trekking the World.