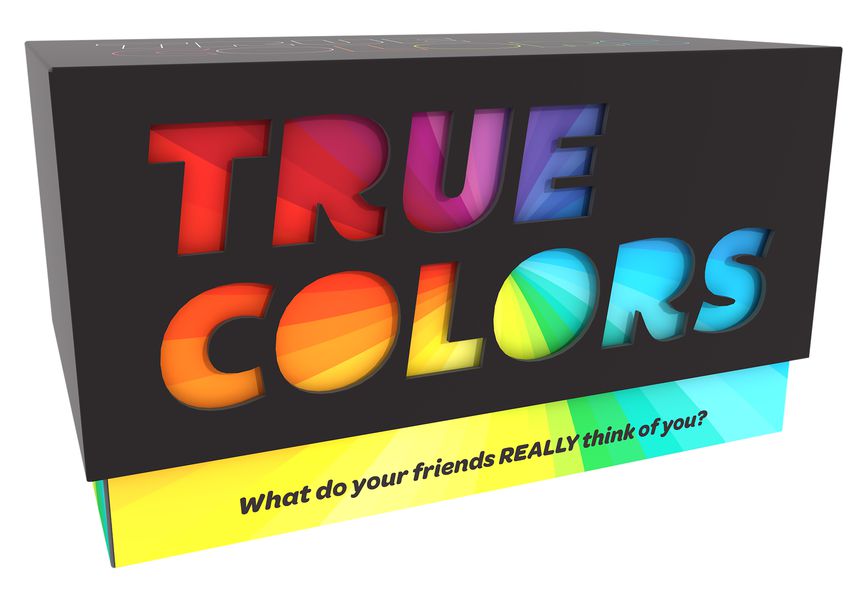 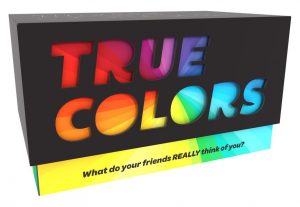 True Colors is a party game tailor-made for groups of good friends. Originally published in 1989, it has seen many versions over the years, but the new version from Games Adults Play is better than ever.

In case the publisher’s name wasn’t a dead giveaway, this game is aimed at an adult audience. It is not overtly crass, but some of the content is suggestive.

At first glance, True Colors might look like a fairly generic party game. Amid the recent influx of low-quality “adult” games, I’d wager most hobbyists would be quick to assume it is just another Cards Against Humanity ripoff.

This assumption would be wrong, however, because True Colors is amazing, and not one to be overlooked.

On its sleek, laser-cut lettered box, the game’s tagline reads “What do your friends REALLY think of you?” To find out, players are posed with ten questions about each other. To provide some examples, these questions might include: 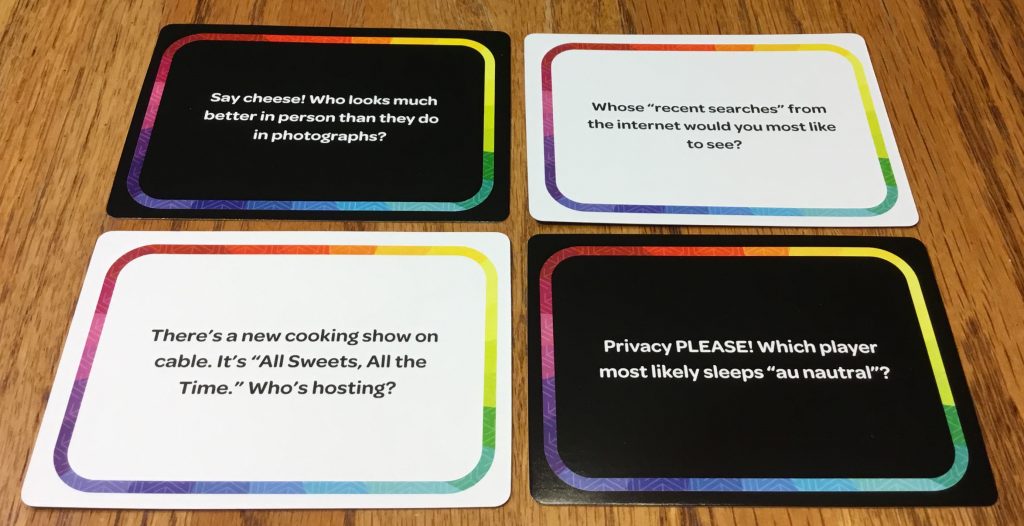 To begin, everyone chooses a color and takes two voting cards of all the other players’ colors (not their own). For example: 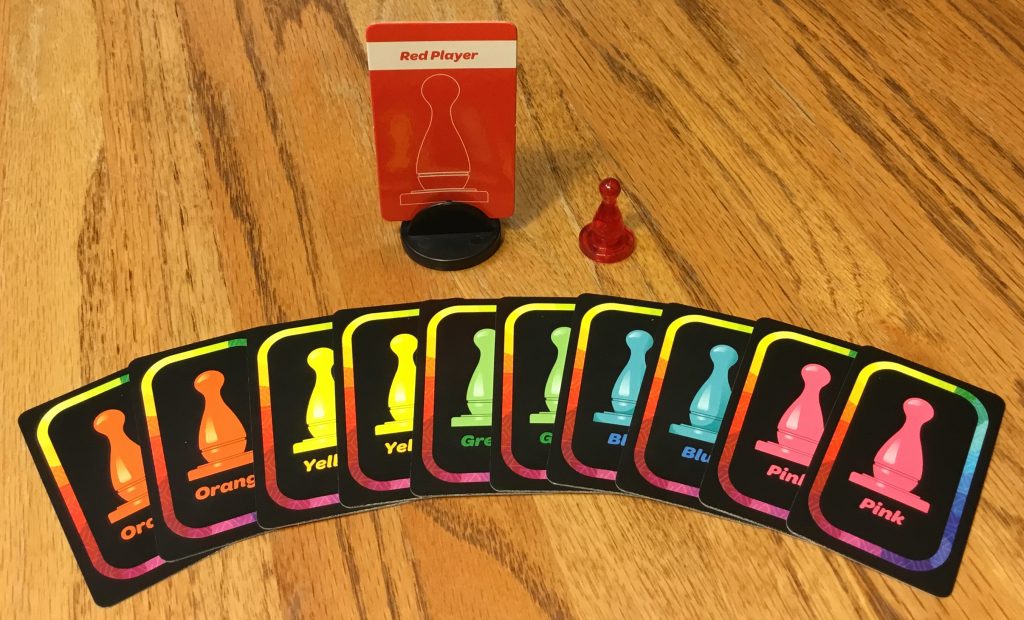 The red player takes her standee and pawn, along with two cards of every other color.

The game lasts ten rounds. To start each round, a question is asked aloud, and all players answer by secretly casting two votes in the game’s ballot box. A person may either vote for two different players or for the same player twice. No one may vote for her own color, as she has no cards with which to do so.

In addition to casting votes, each player predicts how her own color will fare in the voting. To do this, players place their pawns on one of the three central cards, labeled “NONE,” “MOST,” or “SOME.” In doing so, players guess whether their color will get no votes, the most votes, or somewhere in between.

With all votes cast and all predictions made, the ballot box is opened and the outcomes tallied. If a player guessed her color’s ranking correctly, she scores points as follows:

Incorrect guesses score no points. Here is how scoring might look: 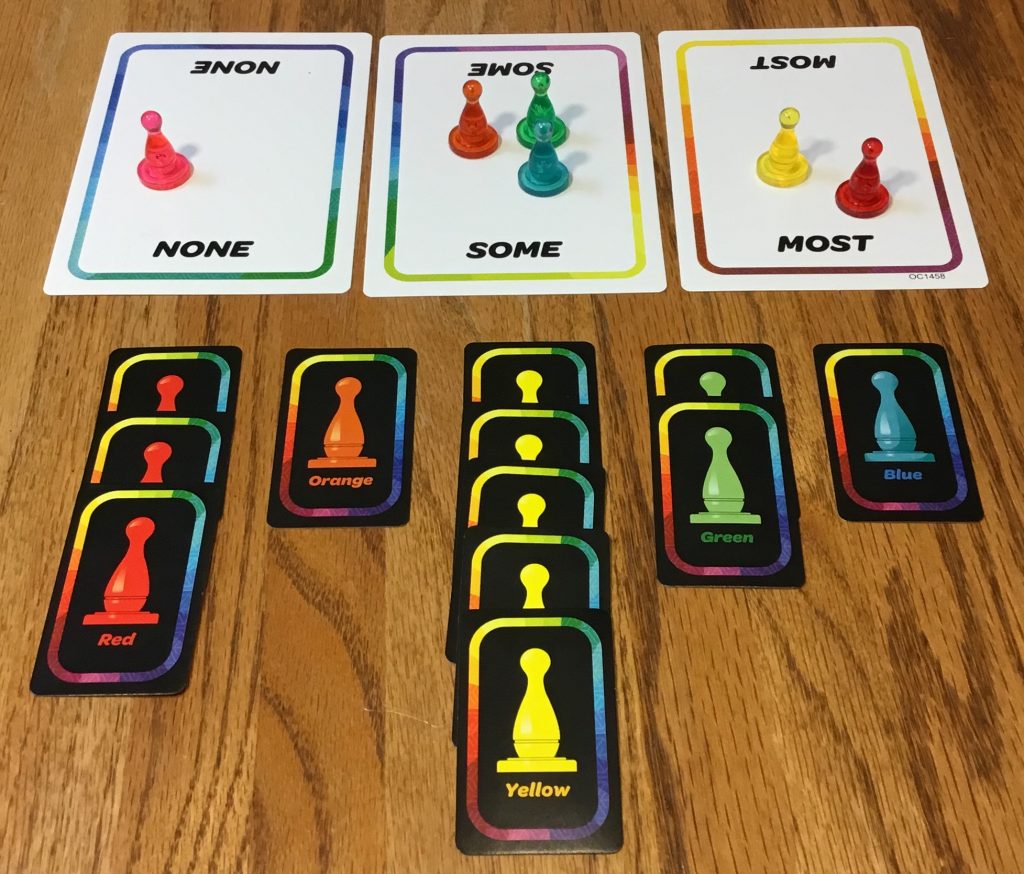 Yellow correctly guessed that he would receive the most votes. Pink, similarly, called that she would receive none. Orange, blue, and green all received some (but not the most). This means all players score except red!

At the end of ten rounds, the player with the most points is the winner.

I realize that sometimes, it can be hard to tell from a review whether a game will click with your group. It’s great if a reviewer likes a game, but that doesn’t always mean it will it go over well at your next dinner party.

However, it should be pretty easy to tell with True Colors. In short, this game will be a blast if:

If both of these boxes are checked, True Colors should be a hit. That being said, since this game relies so heavily on existing relationships, it’s not something I would bring to a community game night where I didn’t know anyone. Playing this game with strangers would likely be difficult, and I could see some of the questions making players uncomfortable. Thus, I recommend this game, but in the right setting. 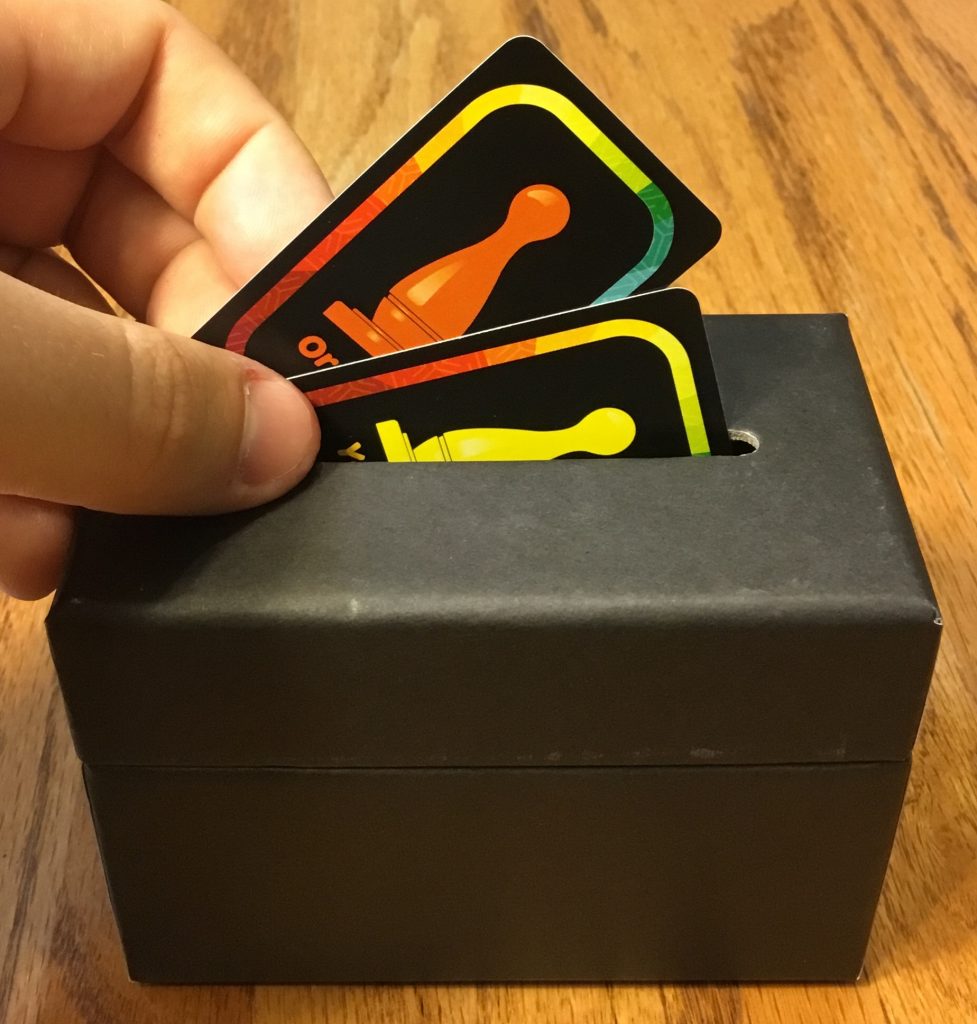 True Colors is definitely not a “serious” game, nor does it try to be. It’s a party game through and through, but it provides a very enjoyable experience among good friends. It is a great choice for casual gamers, but it would also work well as a game night closer, after a deeper strategy game. Next time you’re in need of a good laugh, give True Colors a try.

A review copy was provided by Games Adults Play.