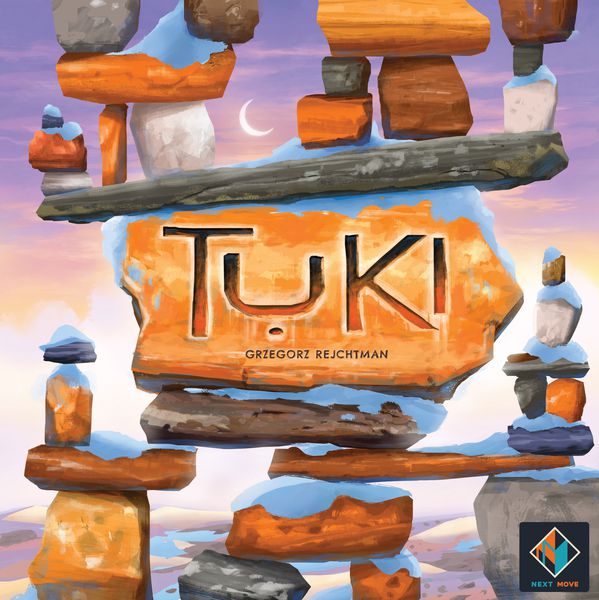 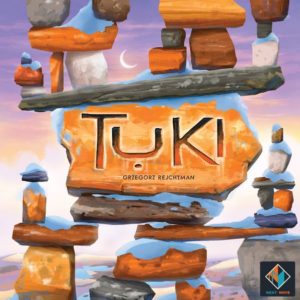 Tuki is a puzzle game by the designer of the popular Ubongo. In this game, players compete to quickly build a 3-dimensional structure to match the one shown on a card. The game includes high-quality components, 2 modes of difficulty, and tons of puzzles.

Tuki is a recent entry in the Next Move Games line, alongside popular titles like Azul and Reef. This 3D puzzle game involves stacking colored blocks on top of neutral, white ones to construct a particular pattern. 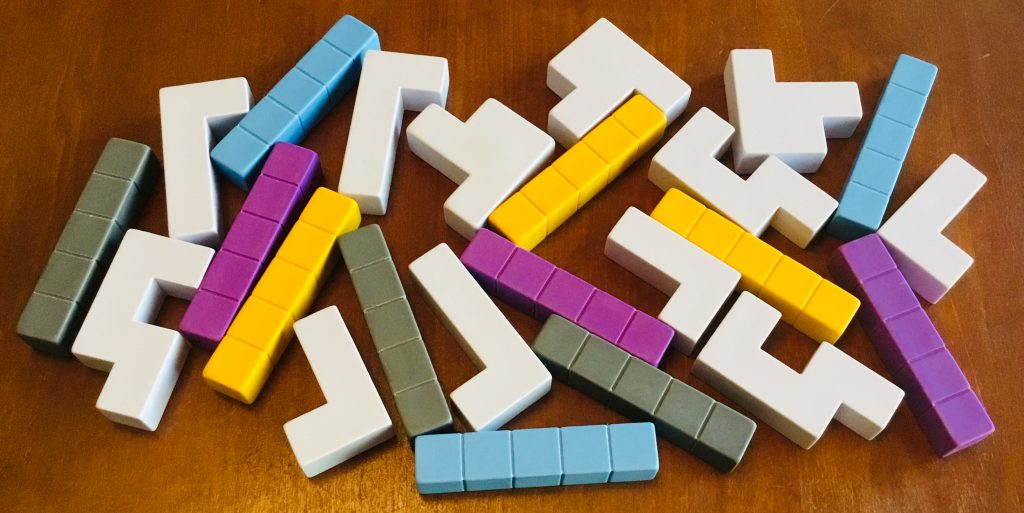 To begin each round, a player rolls the die. The result will show 1 of 3 different animals, and may or may not include a white dot, as well.

The player then draws a card and places it in a central stand, visible to all. The card is oriented such that the matching animal icon is at the bottom. 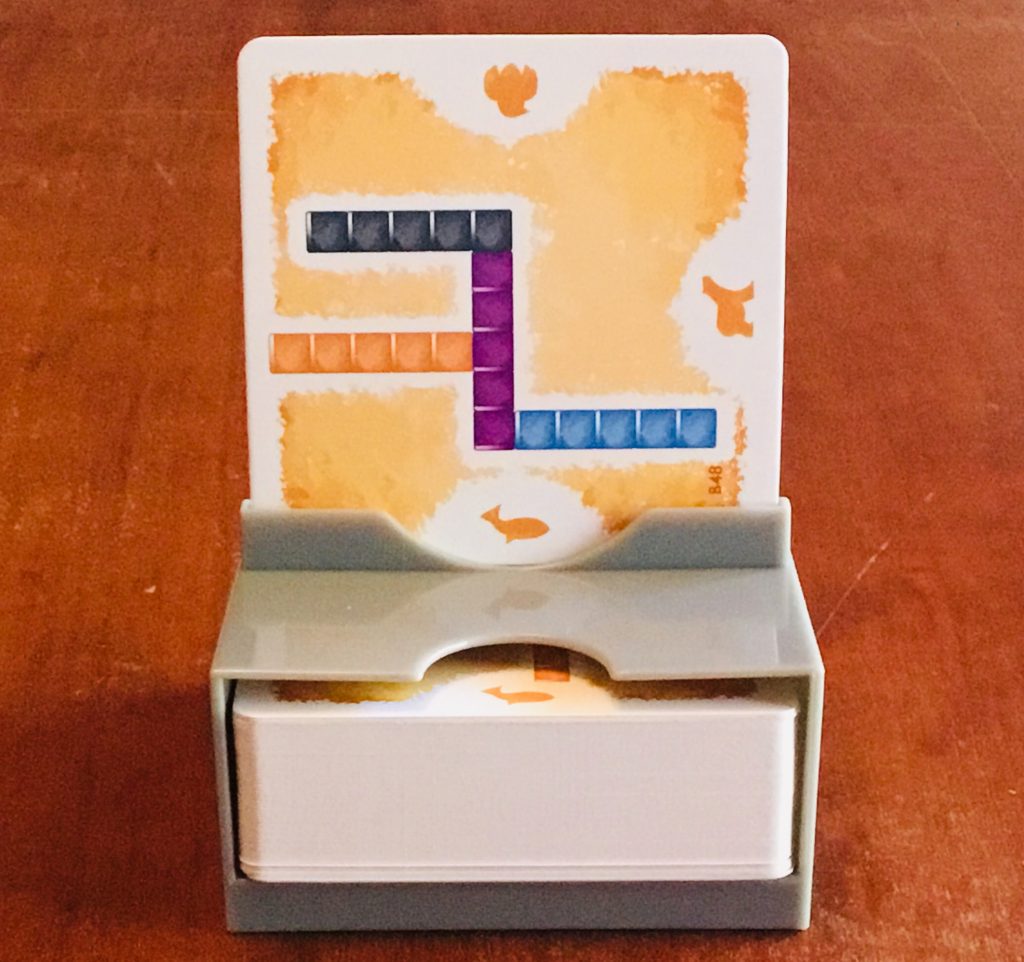 Players then race to build a structure in which all the colored blocks are in the positions shown on the card. The white blocks are “invisible,” in the sense that their position doesn’t matter – they just serve to get the colored blocks where they need to be, acting as supports, counterbalances, etc. 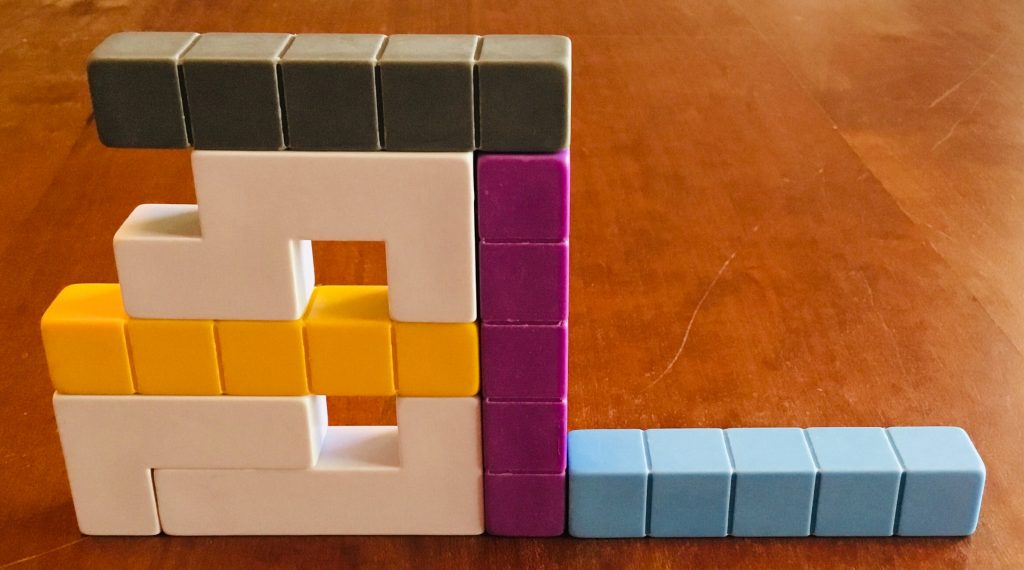 Assuming that all players’ structures follow the rules and match the image in the center, the last player to complete theirs receives the card. (In a sense, getting a card can be thought of as a minus-point.) The game end is triggered when a player receives their 5th card.

The process for completing the game varies slightly based upon the number of players, but the winner is either 1) the player with fewer cards, or 2) the first player to complete their structure in a final, deciding round.

I love real-time puzzle games like this. Tuki is reminiscent of Ubongo, Pelican Cove, and Dimension, all of which I thoroughly enjoy. The puzzle it offers is clever, and its challenges usually have multiple, viable solutions.

The building pieces themselves are of sturdy composition, and they have a nice weight to them. There is one major issue with this game, however: there are only enough sets of blocks for 3 players, not 4! Despite the game being listed as 2-4 players, in a 4-player game, 1 person sits out each round, their only function being to roll the die and place the card. To make a video game comparison, this would be like if 4 people were playing Mario Kart, but they only had 3 controllers – each round, someone has to give theirs up and miss out on the fun. I definitely enjoy and recommend Tuki, but with the large caveat that it is really a 2-3 player game, despite what the box says.

If the player limitation is not an issue, then Tuki is great fun. It seamlessly combines dexterity and real-time logic, and I enjoy the way it makes me think. Fans of puzzle games will definitely want to check it out.

A review copy was provided by Next Move Games.

Tuki is an enjoyable puzzle game, but due to component limitations, I do not recommend it for 4 players.