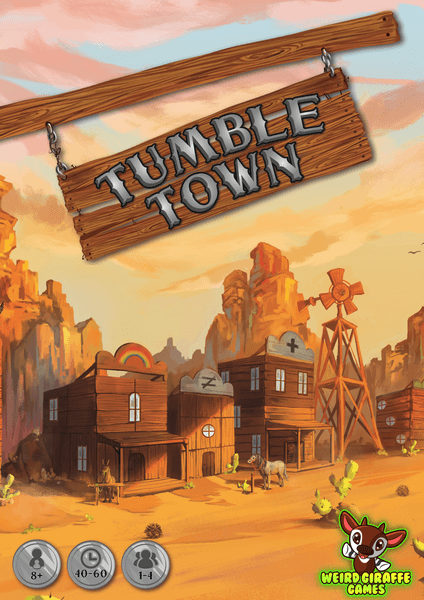 In Tumble Town, 1-4 players vie for the position of Mayor as they plan out the streets of their Wild West town. Over several turns players acquire building plans and dice, attempting to construct the best town they can. They can earn bonuses at the end of the game for matching plot requirements, hidden icons, and finished buildings. The player with the most points (stars) is the winner! 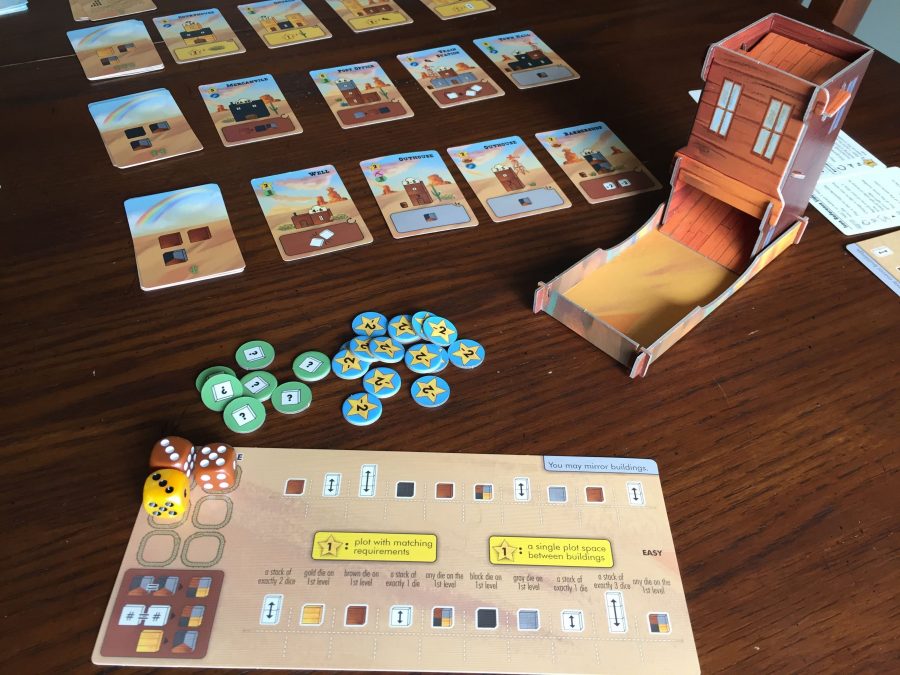 The market, dice tower, and 2nd player’s board.

Once setup for Tumble Town is done, players will have 3 tiers of cards to choose from, denoted by the number of cacti on the back. On their turn, players will:

Any dice that don’t fit into the supply are discarded. Play continues until at least 2 colors of dice have 2 or fewer left in the supply, then play goes until everyone has had an equal number of turns. Points are then totaled, including any negative Penalty tokens, and the player with the most points wins! 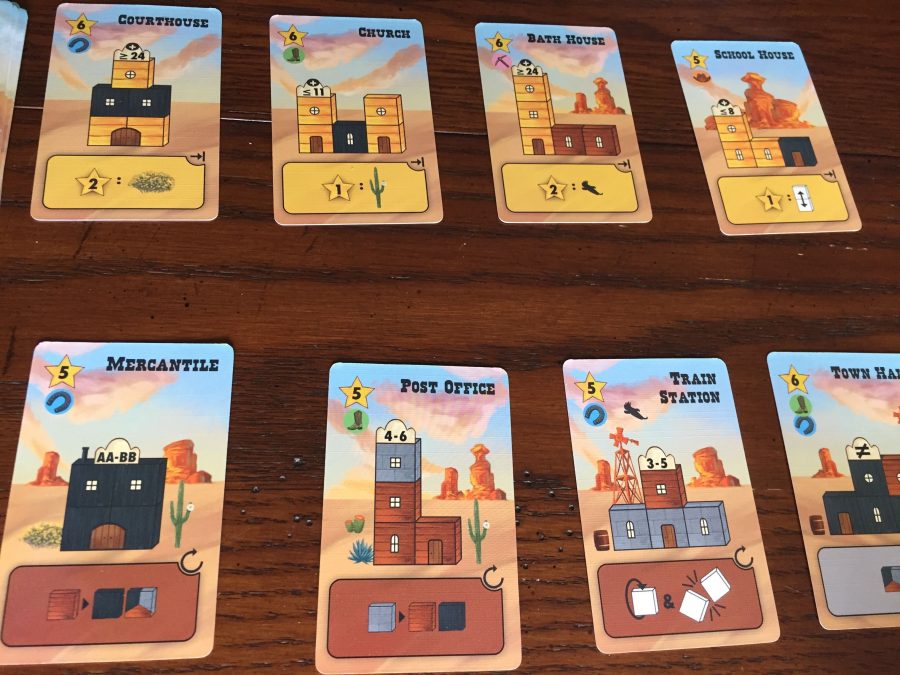 Some of the market cards.

Generally, the buildings in the first row only take 2-3 dice and have fairly easy requirements. Once players have built a couple of these smaller buildings, they should have a storehouse and a couple powers to draw upon that will let them keep their town growing; this is where the engine-building kicks in. It feels good rolling that last die needed to finish a building, but it can be equally frustrating not being able to complete anything that turn. There are rules for building so called “poorly constructed buildings,” however; these earn a player a penalty token for each die that doesn’t meet the building requirements. This might be worth it in some situations to get a specific building’s ability, but these negative points can add up fast. 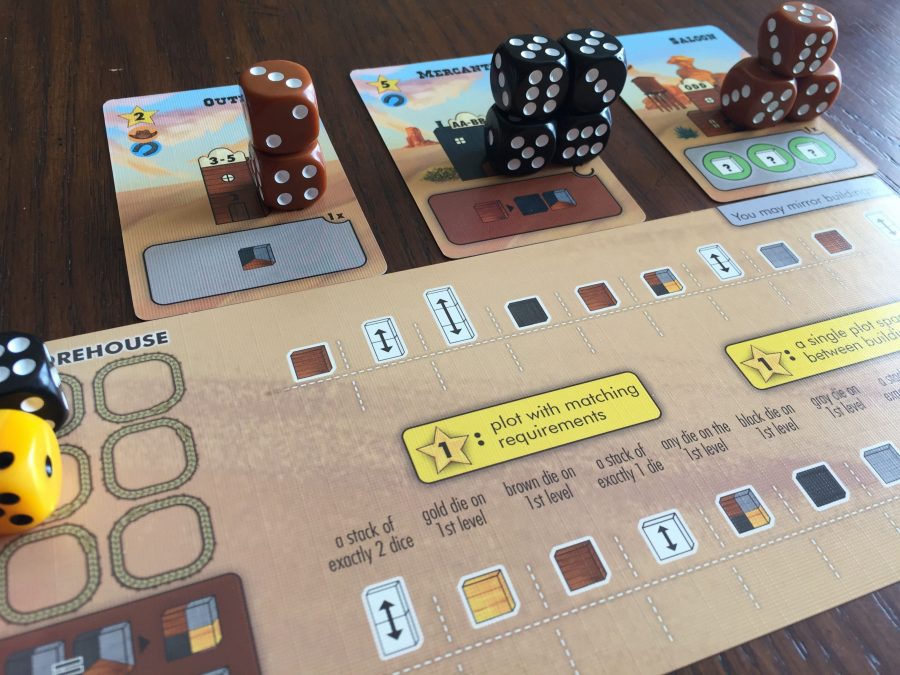 Players are encouraged to place new buildings thoughtfully on main street, as they will get bonus points for placing them next to certain plots, or for leaving a single plot between buildings. While I liked this level of strategy, there is no player interaction or take-that element at all, outside of taking a building someone else was eyeing for their turn. Players will want to have the reference cards out and handy early on, as the buildings have a lot of symbology for both their building requirements and powers. 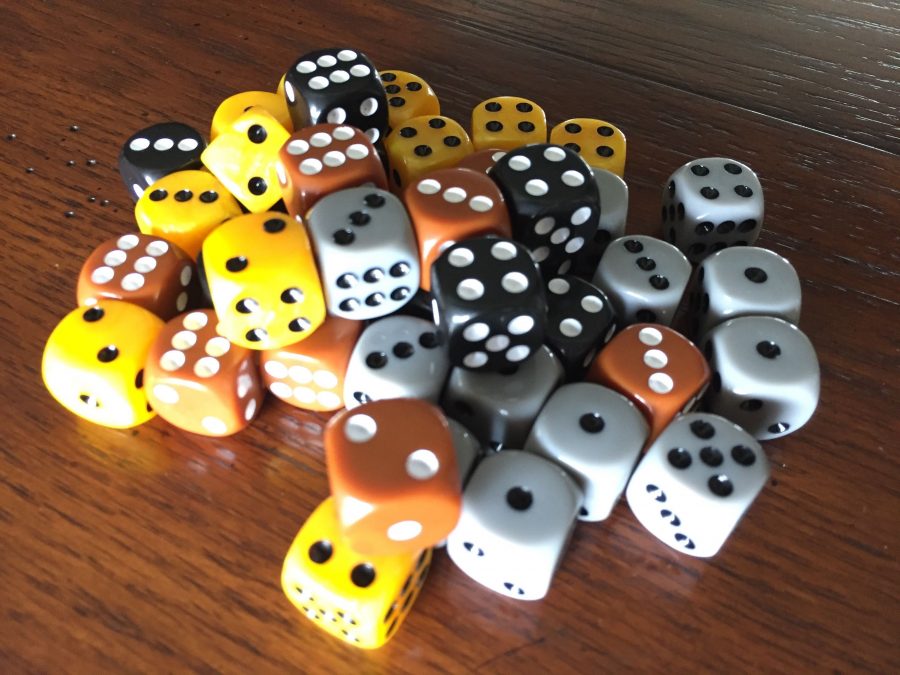 This is half of the dice in the game.

The game has a lot in its favor, including: a large supply of dice in gold, grey, black and brown (I suppose to represent gold, concrete, stone, and wood, but only gold is explained), an included dice tower that fits nicely in the box, a handy quick-reference guide on the back page, and a solo mode. Unfortunately I felt like the heavy leaning on knowing the symbols and different shorthand slowed me down enough that it hampered my enjoyment of this Wild West city building roller. The game reminded me a bit of Blueprints, though on a larger scale, or Kingsburg on a smaller scale. 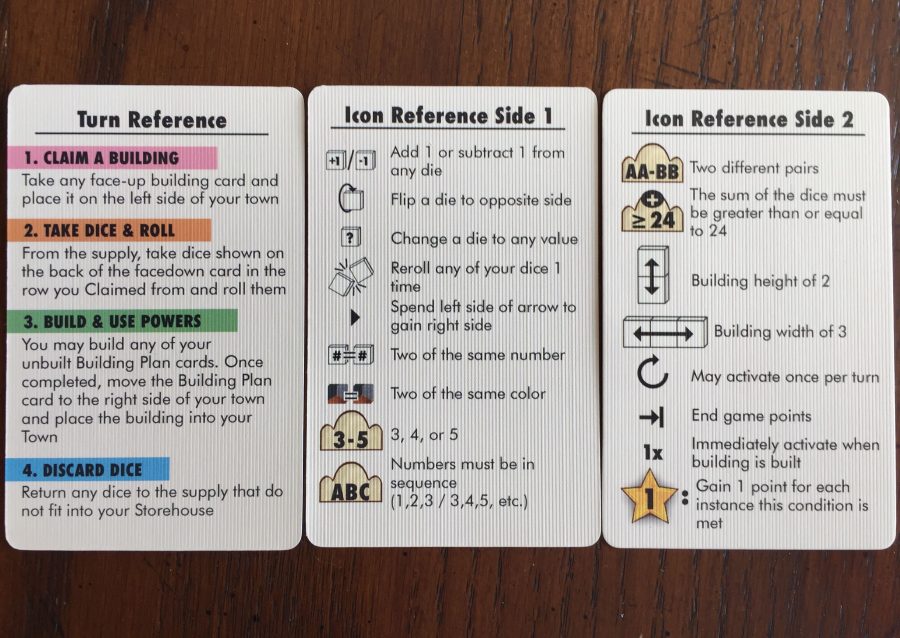 Overall there’s a lot to like about Tumble Town. The variety of cards and variable difficulty modes will give players a reason to keep coming back, and after several games the symbology will feel more natural. If this slight learning curve doesn’t bother you then Tumble Town might be a game to check out. See if you have what it takes to be the best Wild West Mayor!

There's a lot to like about Tumble Town if a heavy reliance on symbology doesn't slow your quickdraw.