Review: Two Rooms and a Boom 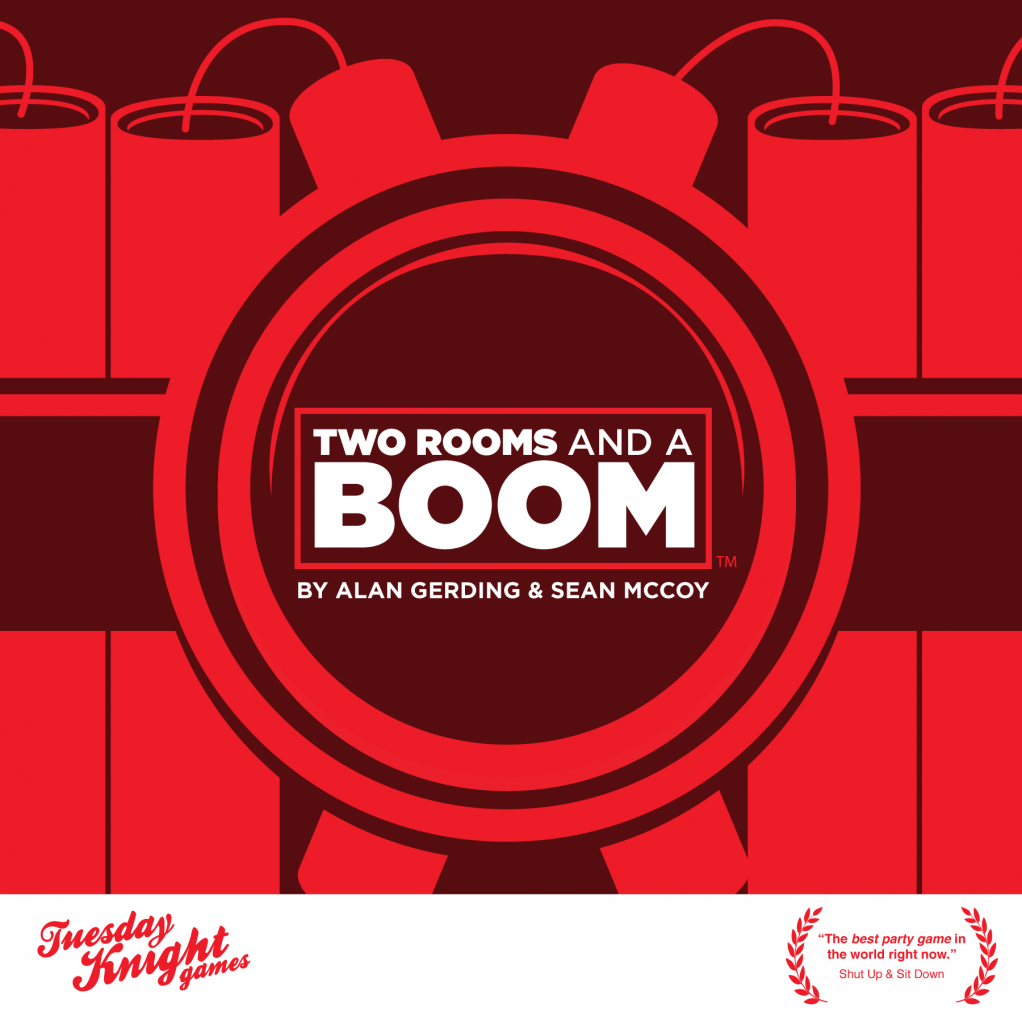 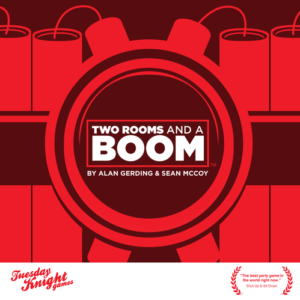 The theme of Two Rooms and a Boom involves one player, the Bomber, trying to assassinate another player, the President. Several times throughout the game, a “hostage exchange” take place, in which certain players move to other rooms. Though it is really just a silly social game, these themes may make some people uncomfortable. Among the dozens of roles included in the game are the President’s Wife and the President’s Mistress, whose card suggestively features a pair of legs. The President and Bomber must always be used, but the wife and mistress cards may be easily removed as desired. The whole game is really tongue-in-cheek, not to be taken too seriously.

Two Rooms and a Boom is the first release from Tuesday Knight Games, and it is a breath of fresh air for the social deduction and party game genres. After The Resistance and Coup made such a splash in the gaming community, we started to see a lot of social deduction games that just felt like uninspired knockoffs. Two Rooms and a Boom is unique, clever, and unbelievably fun.

I generally think four is the ideal number of people for gaming. Some games play better with three, some with five, but four tends to be a great number. Party games often accommodate more players, but even these usually only play six to ten people. Two Rooms and a Boom can play up to THIRTY PLAYERS. That’s unreal.

The premise is simple. In standard hidden-role game fashion, players are dealt a secret card that gives them an identity, a team affiliation, and sometimes a special win condition and/or a rule they must follow. The cards are high-quality plastic, and they can take a good deal of handling and abuse.

Once the cards have been dealt, players randomly divide evenly into two separate rooms. Players in each room then have a few minutes to mingle and try to learn information about who is who. During this time, players may show each other their identity cards if they wish. At some point, each room selects one person to be the “room leader.” After a few minutes of players conversing, the room leaders meet in a neutral location and do a “hostage exchange.” This consists of selecting one person from each room (more in games with higher player counts) and sending the chosen players to the other room. After this trade, players spend a few more minutes mingling—this time with a new person in the room—once again exchanging hostages at the end. After three or five rounds of this, depending on the number of players, the game ends. At this time, if the President and the Bomber are in different rooms, the blue team wins. If they are in the same room, the bomb goes off and the red team wins.

Two Rooms and a Boom comes with a ton of roles from which players can choose. They change the way the game is played and add a much deeper layer to the metagame. Once players have a feel for the basic game (which will happen like, right away), they will want to try different roles. These can be red/blue cards with special abilities and rules, or they might be grey cards, which give their bearers their own individual rules and win conditions. As an example of some of these roles, players’ cards might say:

When you play with eleven or more people, you add in the ability to “color-share,” where you may choose to show the other person only the color of your card, not the full identity. This adds an awesome element to the game, and makes roles like the red and blue Spies interesting. They appear as one color when color-sharing, but are actually members of the opposite team. (You would only know they were a spy if you did a full card-share).

One thing I really enjoy about Two Rooms is how you have to strategize based on which roles are in use. You’ll have to play differently if you know there’s a card floating around that will make you lose. The interplay between individual roles can be hysterical. 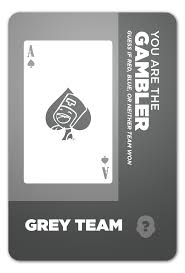 Though this game is not remotely like Cosmic Encounter, I feel that same insane level of variability in Two Rooms and a Boom. Both games have essentially a limitless number of possible power combinations. I’ll admit that there are a few silly roles in the game. The Clowns, for example, must always smile. Eh, not that interesting. Despite a few outliers, though, most of the roles change the game immensely in a subtle, yet meaningful way. There is a LOT of game in this box.

I can see people being uneasy about the theme of President and Bomber. If this is a concern for you, you should know that the game doesn’t take itself seriously AT ALL. It’s a touchy theme, but I think it’s done in a very lighthearted manner.

Two Rooms and a Boom is one of my favorite party/social games. It’s the kind of experience that creates maximal fun with minimal rules. If you like social deduction games and have a large game group, this game is definitely worth a try.

Two Rooms and a Boom is a refreshing take on the social deduction/party game genres. It's extremely accessible, quick-playing, and it leaves everyone wanting to play again right away.