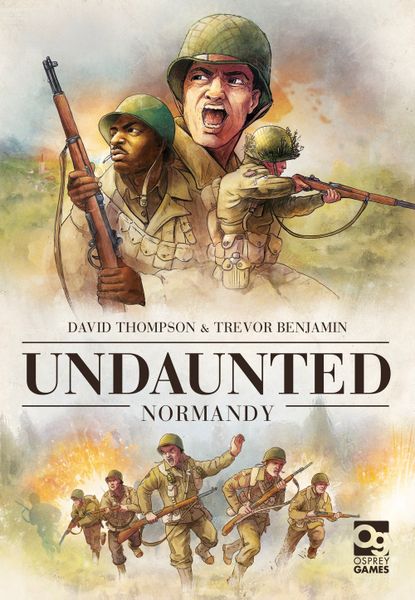 Undaunted: Normandy is a two-player deck-building game that pits the forces of the United States versus Germany in recreations of key battles in Normandy of 1944. The game is full of historical side-bars, but aims to give players the feeling of commanding a rifle platoon, rather than adhering strictly to rigid accuracy. As such, players will play cards to move units, attack, enhance their deck and hinder their opponent’s, and ultimately complete or capture the objectives. So is it any good? The short answer is yes, but I’ll explain why below!

Players will roll dice to see if their attacks are successful. If they are, the opposing player must remove a card corresponding to the attacked unit from the game, denoting a casualty. The artwork shows different soldiers with their weapons, sometimes yelling or moving, but no blood or gore is shown. 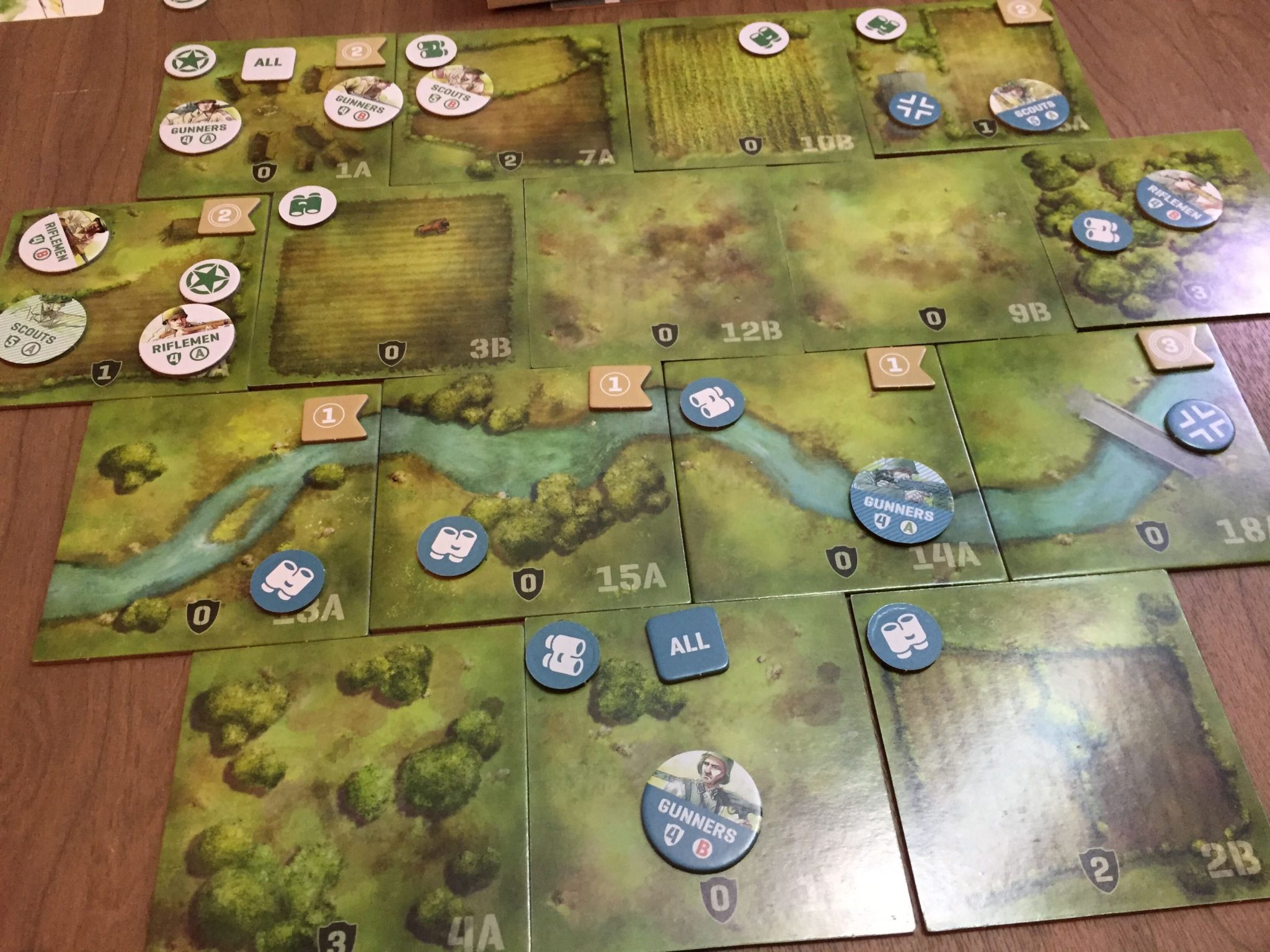 Undaunted: Normandy gives players the chance to play out moments similar to Saving Private Ryan, Band of Brothers, and The Great Escape. And while these cinematic homages to World War II might first spring to mind, Undaunted actually plays a lot more like a real-time strategy video game. You’re given a small deck and a supply at the start of the game. Chits representing your Riflemen and Scout units are on the board, and when you play cards corresponding to specific chits, you can move or use them. For example, playing a card for Riflemen Squad A allows you to interact with the Riflemen A chit. Simple. And each card lists the possible actions at the bottom. Some cards will let you add cards from your supply (Bolster) or draw them from your deck (Command) or even discard a Fog of War card from your hand (Recon). 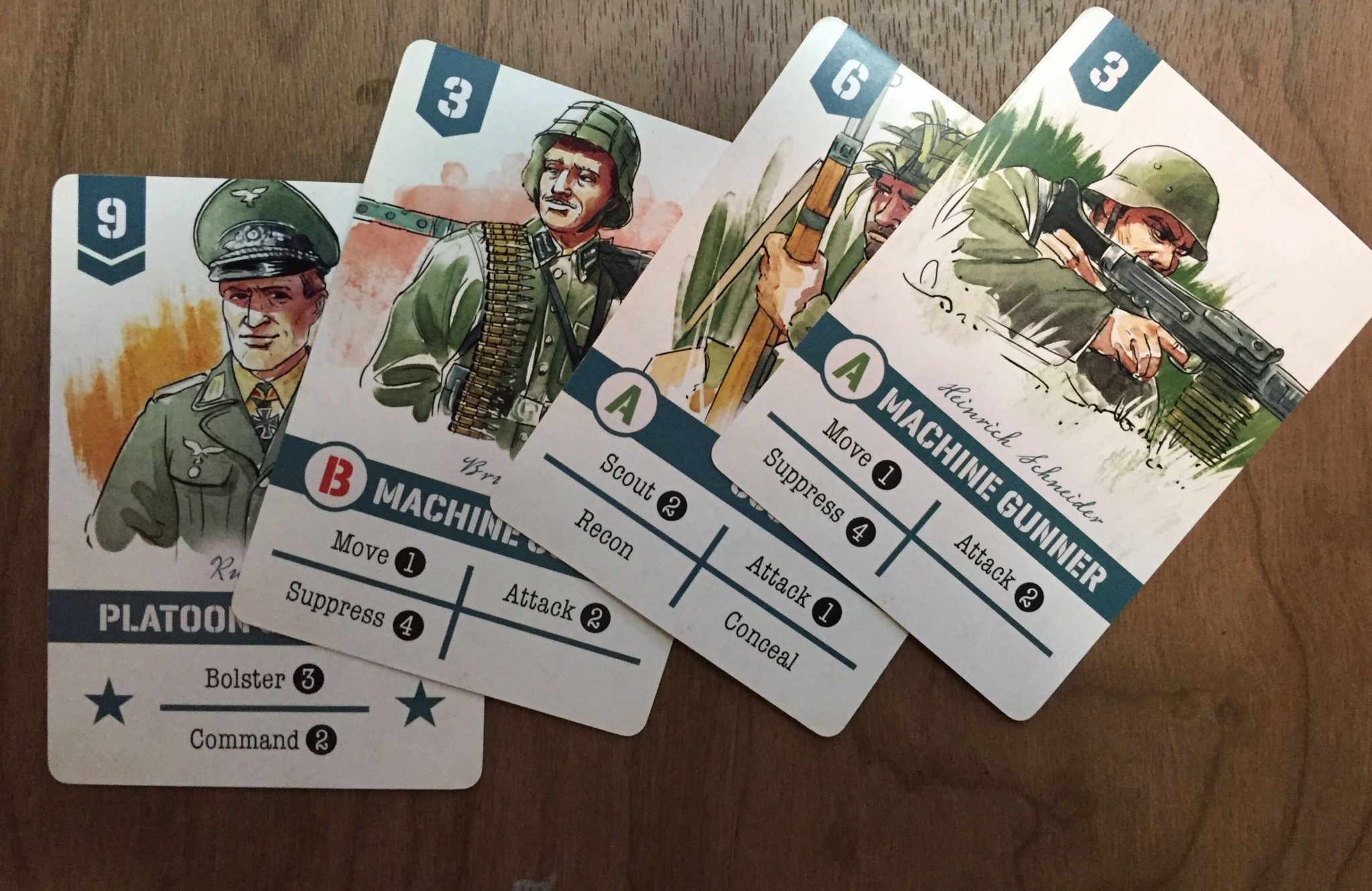 This is a very good hand for the Germany player. The Platoon Sergeant will let them add cards, the Machine Gunners can suppress or damage enemy units, and the Scout can mark objectives or manipulate Fog of War cards, which take up valuable hand space.

A game round has 3 phases: Draw Cards, Determine Initiative, and Player Turns. At the start of each round players will draw a hand of 4 cards. They then determine initiative by revealing a card from their hand, and highest initiative score (in the top left) wins. Ties go to the player who already has Initiative. Then the player who won Initiative will play all the cards from their hand, followed by the other player. After both players have finished playing cards, a new round will begin if the game-winning objectives have not been achieved.

Undaunted does a good job of drip-feeding information to players over the course of the 12-game campaign, slowly introducing new units and concepts. Players will start with just a Rifleman A and Scout A squads, but over the course of a few games they will gain access to Machine Gun squads who have a Suppress ability, and Snipers who have long-distance deadliness. By game 7, players will have access to the entire supply including Riflemen A, B, and C, Scouts, Machine Guns, Mortars, Snipers, and Officers. 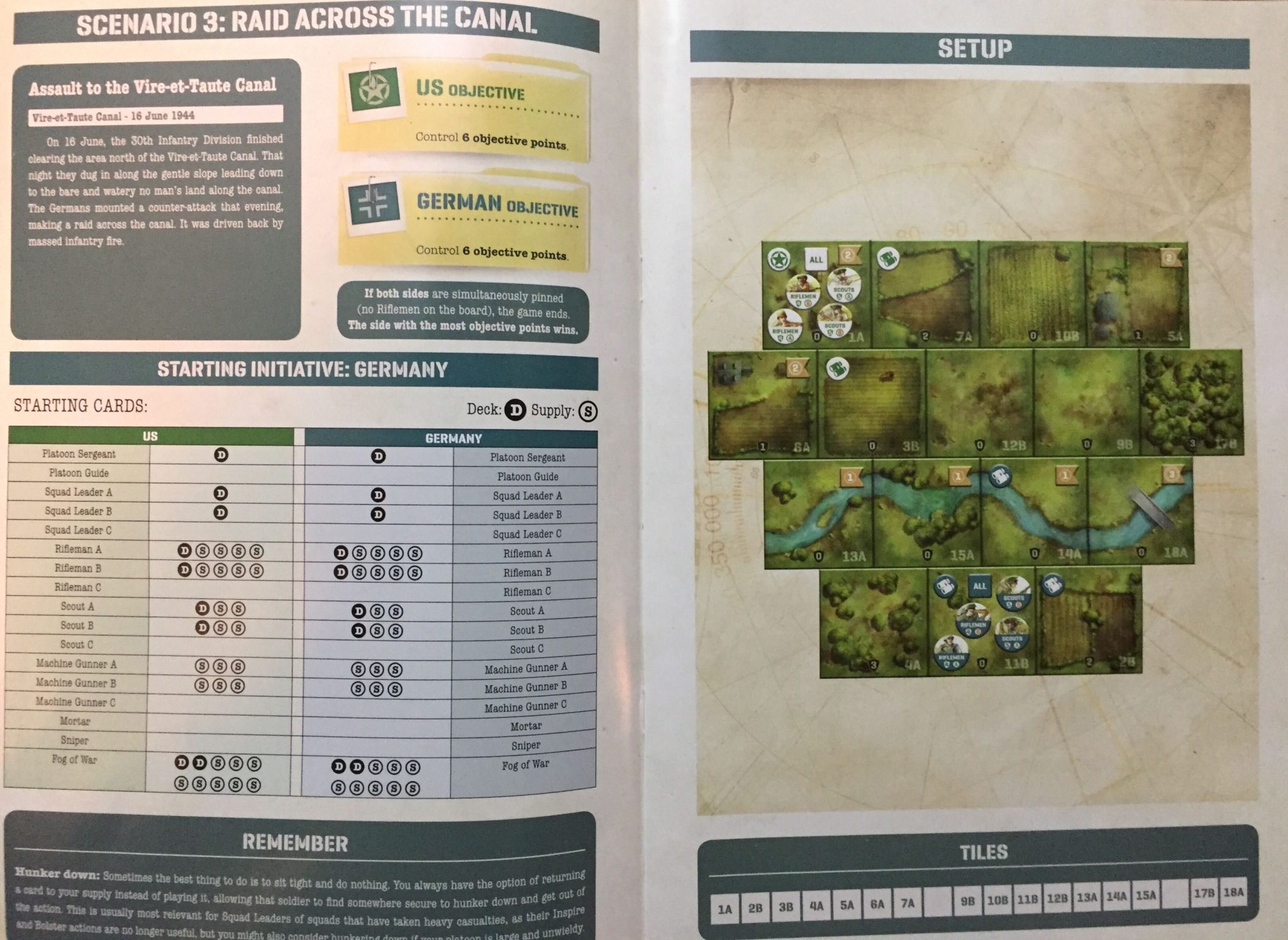 The Scenario book does a great job of laying out what cards to use in your Deck and Supply, as well as how the tiles should be placed and filled.

While it might seem like it could be paralyzing trying to decide what to do on your turn, it’s actually quite clear since you only ever have three cards to work with once you’re done with Initiative step.  Officer actions like Inspire, Bolster, or Command can bring more cards into play to help, but it doesn’t feel overwhelming. And as long as you don’t let your deck fill up with Fog of War cards you’ll usually have something to do. It really helps that each unit has the possible actions printed at the bottom, showing you what 2-4 actions that card will let you choose from. And while you might not immediately remember that Inspire lets you return “X” number of cards back to your hand, Undaunted wisely included a quick reference page to help players out. After just a couple games most players will easily start to remember what the different actions mean. 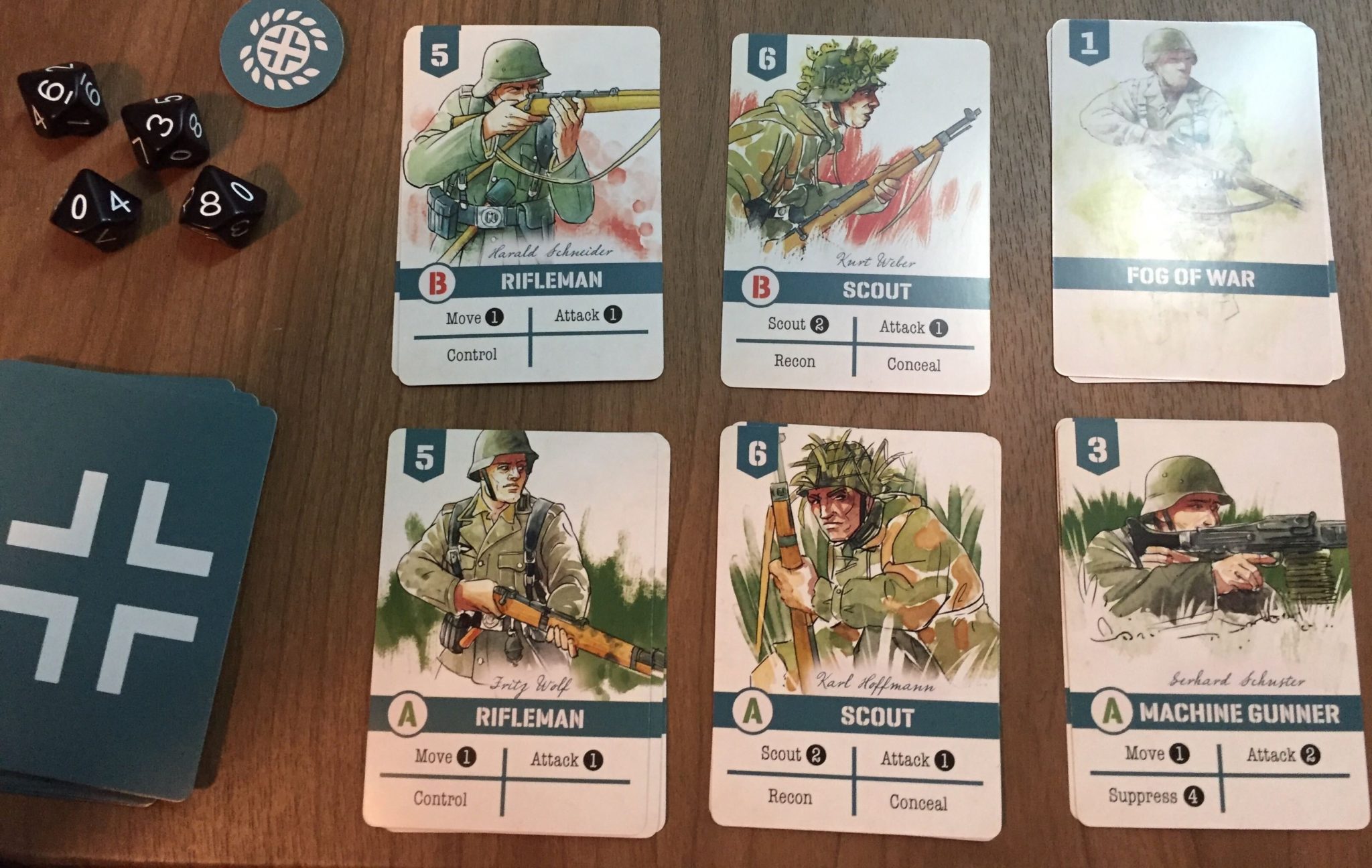 The German Supply. When using the “Bolster” action, players will add cards from here to their discard pile. Enemy scouts add Fog of War cards.

As I mentioned before, Undaunted: Normandy includes a 12-game campaign, but thanks to the modular tiles used to play, it is easy set up your own games with custom matches. The artwork is engaging, and each unit has a name under the image so players can connect with their “soldiers”.  I also applaud the designers for making a World War II game where you play with or against the German Army, as opposed to a generic, faceless Reich enemy, which was one of my only complaints against Air, Land, and Sea. Undaunted does a good job being respectful to the real-life casualties of war, while still providing a fun and educational game, experience. If you enjoy RTS games or media based around World War II, you should definitely check out Undaunted: Normandy. 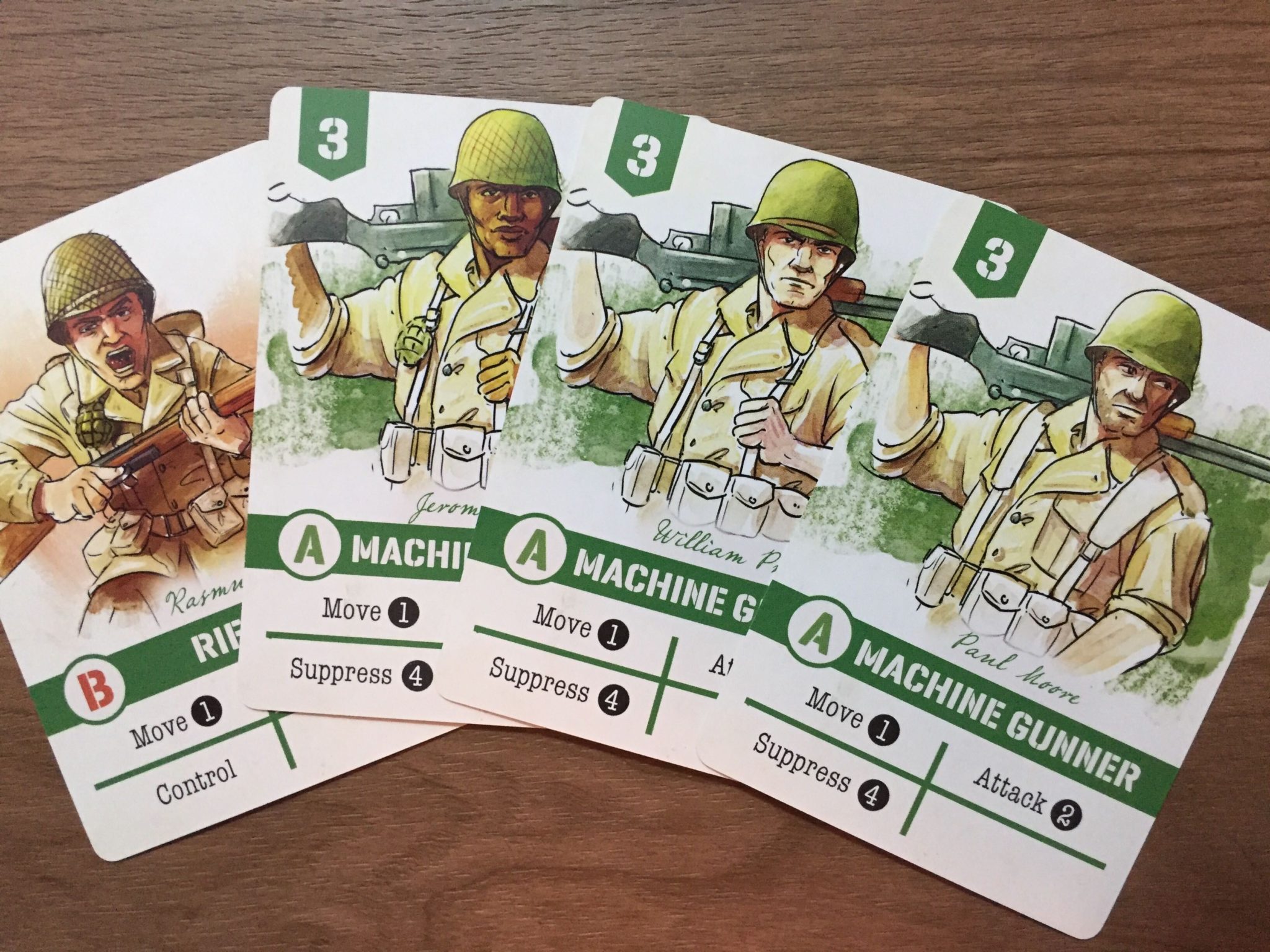 A trifecta Machine Gunner hand shows off the slight differences in each card for the American team.

If you enjoy RTS games or media based around World War II, you should definitely check out Undaunted: Normandy.