Review – Viscounts of the West Kingdom 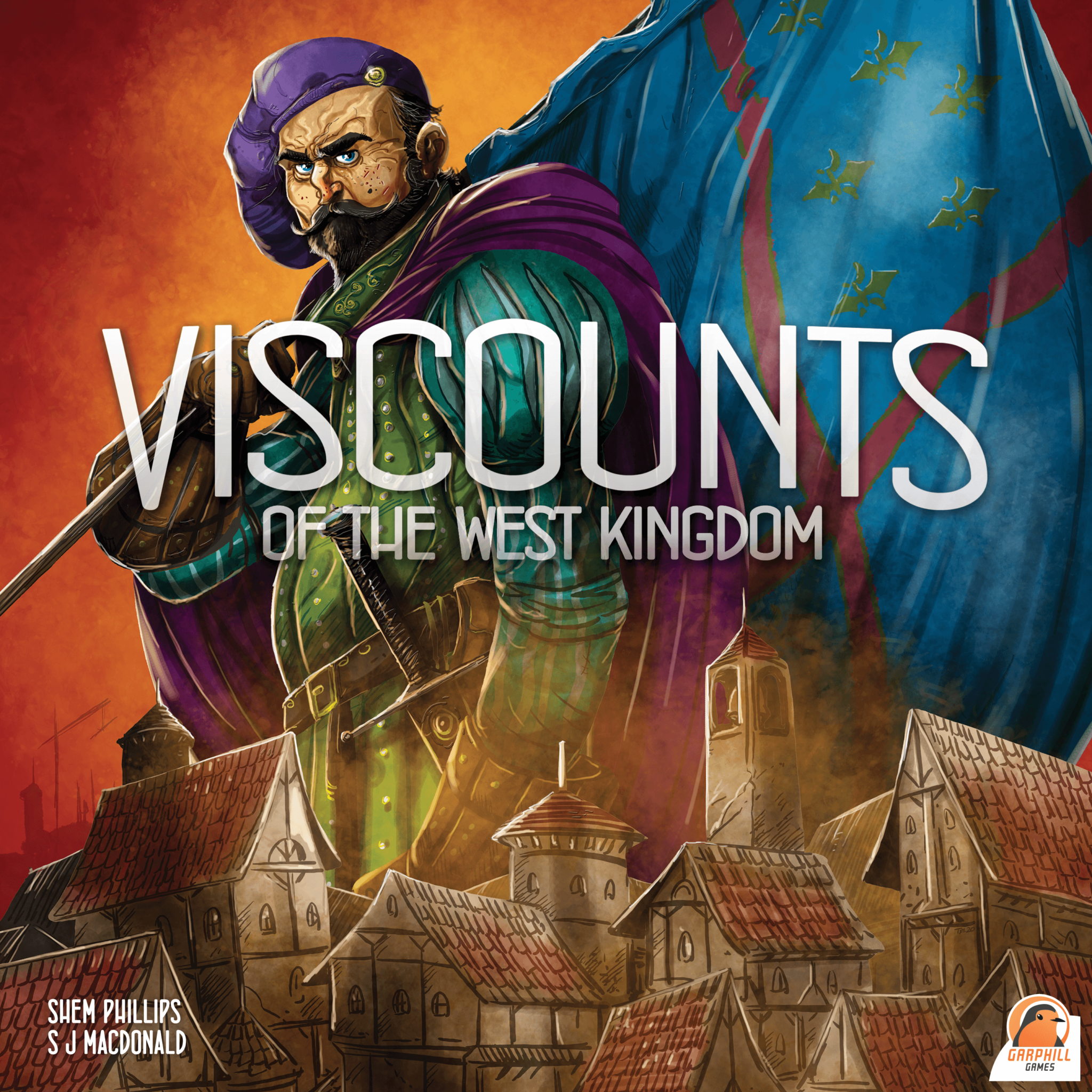 While many designers like to iterate on their own ideas, few have done it with as much care as Shem Philipps and S J Macdonald. After Philipps completed his North Sea trilogy, he has partnered with Macdonald on Architects, Paladins, and now Viscounts of the West Kingdom. Both prior games are well-regarded titles, having made their way into the Top 100 on BoardGameGeek. Does the series finish as strong? 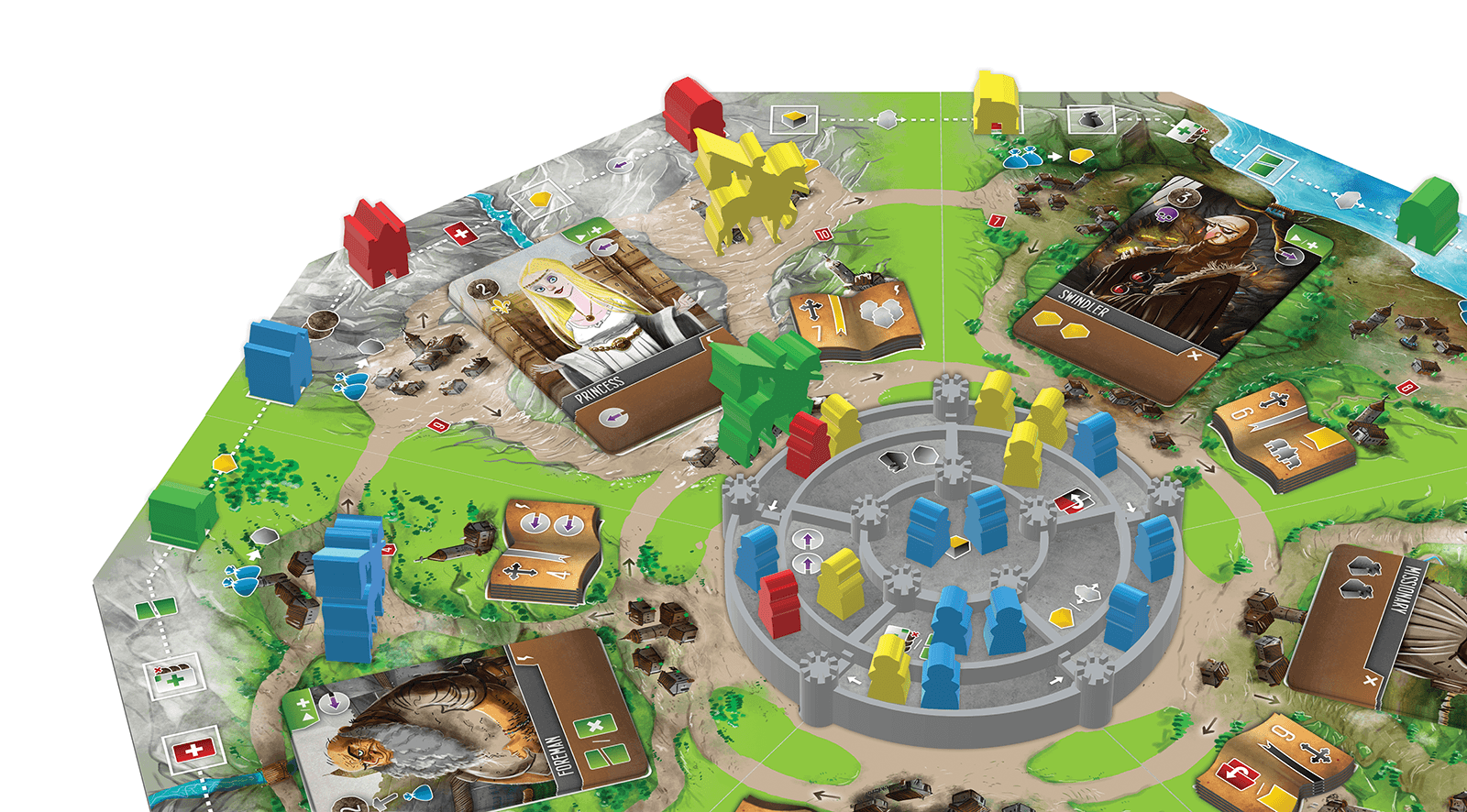 The original reason I became interested in Viscounts of the West Kingdom was its billing as a deckbuilding approach to the West Kingdom concepts, as that’s my favorite genre. However, while your deck of cards drives your moves each turn, it is certainly only one piece of the puzzle. Your cards let you take various actions as you move around a rondel on the central board, and actions improve as you put out buildings from your player board. Many concepts from other West Kingdom games such as Corruption, Virtue, Debt, and improving player actions with buildings will all be familiar to veterans. It may seem like a lot to take in at first, but it is both simpler and shorter than its direct predecessor, Paladins; we played two games of Viscounts in the amount of time it takes us for one game of Paladins.

The design reminds me quite a bit of Stefan Feld’s designs, in that the designers have a clever central mechanism (here it’s the combination of deckbuilding with the central rondel), but it’s unclear what they should do with it. I frequently say that these games are at their best when each mechanism is tightly interwoven, and for the most part, Viscounts pulls this off quite successfully. The trade action, of course, provides necessary resources to do the other actions, while putting buildings on the board permanently improves other actions. This all feels very natural, and then the other two standard actions give ways to actually score victory points. (Buildings also give points; more on this later.) However, this is where Viscounts stumbles a little.

The yellow (gold) action allows players to place workers in the castle, which don’t “work” in the sense of taking actions like in worker placement games, but stay there to score points. Some spots give one-time bonuses to other actions when workers are placed, nicely interweaving with the rest of the game. However, the game has some very strange rules about having three of the same worker in a spot, where one advances towards the middle, while the other two advance in opposite directions on the same level of the ring. This can cause major chain reactions, which can be quite fun if you’re the one doing it. However, it can be fairly hard to keep track of; the castle isn’t nearly large enough for the crowd that ends up on it, and it’s a fairly tedious process. It feels like they copied something from some other game idea and pasted on here without a good reason.

The last action, the black (inkwell) action, allows players to grab books, which offer endgame points as well as one-time bonuses. The problem with these is two-fold. The main problem is that they simply don’t seem to offer as many in-game benefits and points other options. For example, the castle gives one-time bonuses, but can frequently chain combos into getting several bonuses at once, while a book only ever provides a single benefit. Furthermore, a variety of colors is required to maximize points for books, and at lower player counts, if the other player isn’t going for books and every book available is the same color, you are simply screwed. This would easily be alleviated by having scoring more akin to the Science cards in 7 Wonders; strongly rewarding multiples of the same color as well as complete sets. (Yes, there is a benefit to getting three-of-a-kind, but not past that.) Another inherent problem is that the best way to build an engine, using the grey (stone) building action, also gives generous amounts of endgame points for doing so, further undermining the usefulness of the black (inkwell) of action.

Of course, any path to victory is viable, depending on your deck construction. At first I was unhappy with the minimized role of deckbuilding in Viscounts, but the truth is that I grossly underestimated it in my first play, and then quickly learned my lesson. While every turn provides an opportunity to add to your deck and many turns offer a chance to “scrap” or “trash” a card, you are not cycling through your deck nearly as often as a standard deckbuilding game, since you play a single card each turn. That means changes to your deck can have huge ramifications, but it takes quite a while to feel the impact. Patience is a virtue here. Once you get a feeling for the flow of the deckbuilding, it comes down to a handful of key decisions, rather than the sum of many small decisions. That seems like it would increase luck, but I found the opposite, with so many other ways to impact your turn through your player board and movement on the rondel. Many games have tried “deckbuilding with a board” and done it poorly, but Viscounts seamlessly interweaves the concept with a smorgasbord of other mechanisms.

While Viscounts has a lot going for it, it will always be compared to its predecessors in the trilogy, and unfortunately it doesn’t quite stack up to Paladins of the West Kingdom. While it’s shorter, simpler, and sufficiently different, it lacks the agonizing tension that made Paladins interesting. They are about the same level of interaction (and there’s more in Viscounts than you may realize at first), but turns mostly felt mechanical. While it may take a minute or two to determine, the optimal move could usually be puzzled out. I never felt like I was agonizing over two truly good options; perhaps at most once or twice in across several games. Meanwhile, Paladins had that decision tension that keeps me coming back for more, and as ineffable as that trait is, it’s the thing that keeps me coming back. I’d love to try all three games in the Tomesaga campaign, but otherwise, while Viscounts is a good game in its own right, it’s going to suffer from Paladins’ long shadow.

Thank you to Renegade Game Studios for providing a review copy of Viscounts of the West Kingdom.

While it doesn't quite live up to Paladins of the West Kingdom, it is a strong Eurogame in its own right.