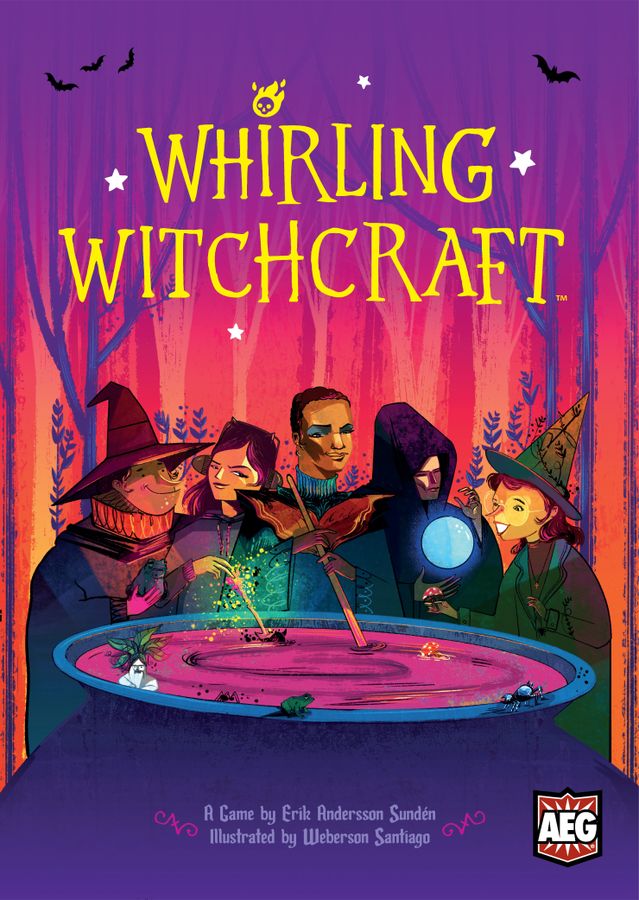 Whirling Witchcraft is a new game from AEG in which players concoct a bubbling brew of ingredients to send to their nemesis—the player on their right. It looks nice on the table, with stylized artwork and cool 3D cauldron pieces… but how is the gameplay?

Despite its name, the theme of witchcraft is pretty abstracted here. It’s essentially a game about converting resource cubes into other resource cubes. Nothing too problematic here.

In Whirling Witchcraft, players try to overwhelm their neighbor by sending them more ingredients than they can handle. Each player begins the game with a tableau board, a cauldron, and a hand of recipe cards.

Every tableau starts with a number of ingredient cubes. Throughout the game, players use their recipe cards to develop an engine that converts cubes into other cubes, a la Century: Spice Road.

At the beginning of each round, all players secretly select a recipe to play. Once everyone has chosen their card, players reveal them and resolve any arcana symbols on them. Arcana symbols come in 3 types, and whenever a card shows them, the player advances the matching token(s) on their arcana track.

Any time a token passes an even-numbered space, the player can execute that token’s special action (e.g. adding an ingredient to their cauldron or removing ingredients from their board).

Then, after arcana has been resolved, players can use their recipes to convert resources—this is the central aspect of the game. Each player spends cubes from their tableau to fulfill recipes and receive the resulting cubes; these cubes go into the player’s cauldron, and the cubes they spent to get them are returned to the supply.

Next, each player passes their cauldron to the person on their right. This neighboring player must place the cubes they received onto their own tableau. If any of these cubes cannot be placed because there is no room for them, those cubes are returned to the player who sent them and count as points. At that time, if any player has 5 points, the game ends and that player wins. Otherwise, everyone passes their remaining cards to the left, draws back up to 4 cards, and the game continues.

Whirling Witchcraft is a mixed bag. I typically love light, snappy engine-builders (Century, Splendor, Gizmos, Masters of Renaissance, etc.), but this one leaves a lot to be desired. The fact that players primarily interact with just 1 other person—the neighbor to whom they pass their cauldron each turn—means that if someone is playing poorly or not strategizing at the level of their opponents, their neighbor will have a major advantage. By extension, it also means that this game does not work as well with more than 2 players.

Another source of frustration is that the arcana powers are listed in the rulebook, but nowhere else. It would have been easy to include them on the player boards, and it is tedious to have to pass the rulebook around as players remind themselves what each ability does. (Heck, even the arcana track itself could have been printed on the player boards; there’s plenty of room!)

However, there are some good aspects of Whirling Witchcraft as well. For one thing, the core challenge of overloading another player creates an interesting dynamic. If a player is trying to feed their opponent, say, a ton of red cubes, it would be in the opponent’s best interest to spend lots of red cubes to maintain space for new ones. In this way, each player’s strategy must be based on what their neighbor is trying to overrun them with. I have never seen a game do this kind of thing, and it is genuinely interesting. Also, the artwork of Weberson Santiago (The Bloody Inn) fits the game’s theme very well and creates a nice aesthetic.

While Whirling Witchcraft has a cool and unique idea at its core, it was not for me. I suspect some folks will enjoy it, and others not, so I give this one a “try before you buy.”

While Whirling Witchcraft has a cool and unique idea at its core, it is bogged down by gameplay and production issues. Try before you buy.