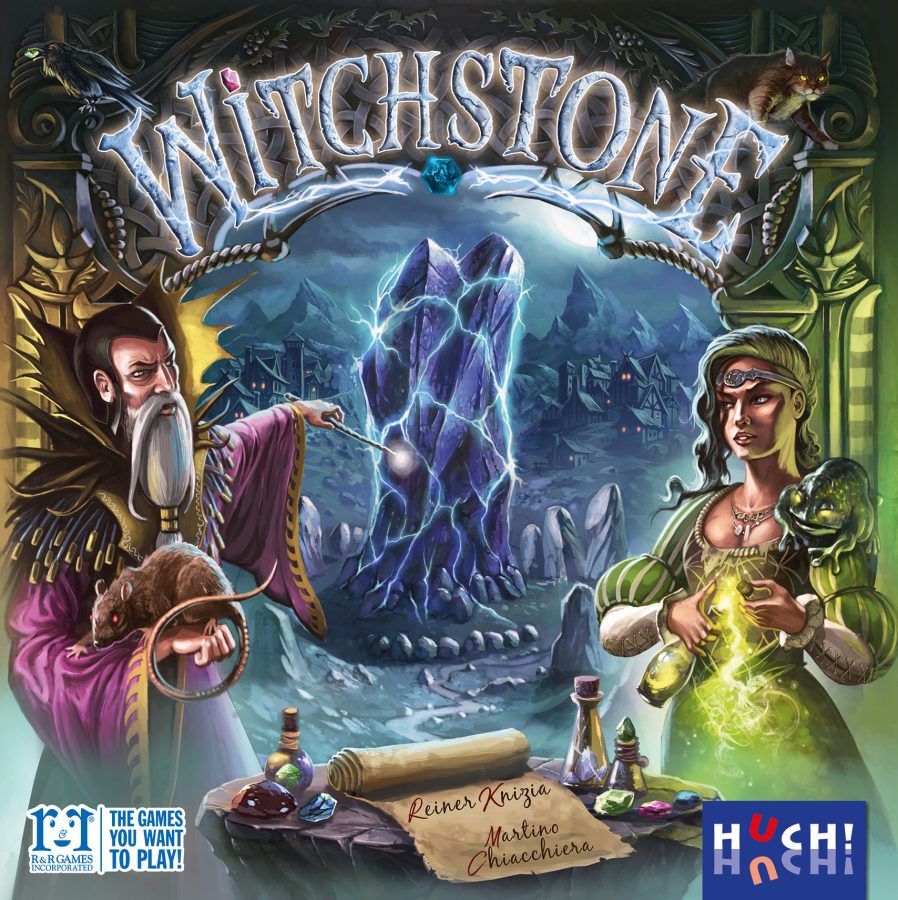 One of the most prolific designers in modern board gaming is Reiner Knizia. Knizia is famous for saying that he intentionally doesn’t play or even look at other people’s designs because it hampers his process for innovating. So, to see him co-design a high-profile release is nearly unheard of! I don’t know the backstory, but I assume it has to be related to the game’s unique component: double-hex tiles, attached on one edge, exactly like those found in Knizia’s 2004 Spiel des Jahres nominee, Ingenious. This game, however, looks to be more of a gamer’s game, which Knizia was well-known for in the 90s. Gamer’s game or not, is it good? Let’s find out!

Witchstone is largely a mechanical game that could have had any theme, but the main problem here is the use of pentagrams. One of the six main actions is a “pentagram” action; players have several personal tiles with pentagrams on them, and activating them has players move a pawn in a circle around a large pentagram on the central board. The cauldrons, potions, witches, scrolls, and what-have-you are more generic fare, and certainly nothing here is on the level of Sorcerer, but just barely enough that some Christians might find this too problematic. 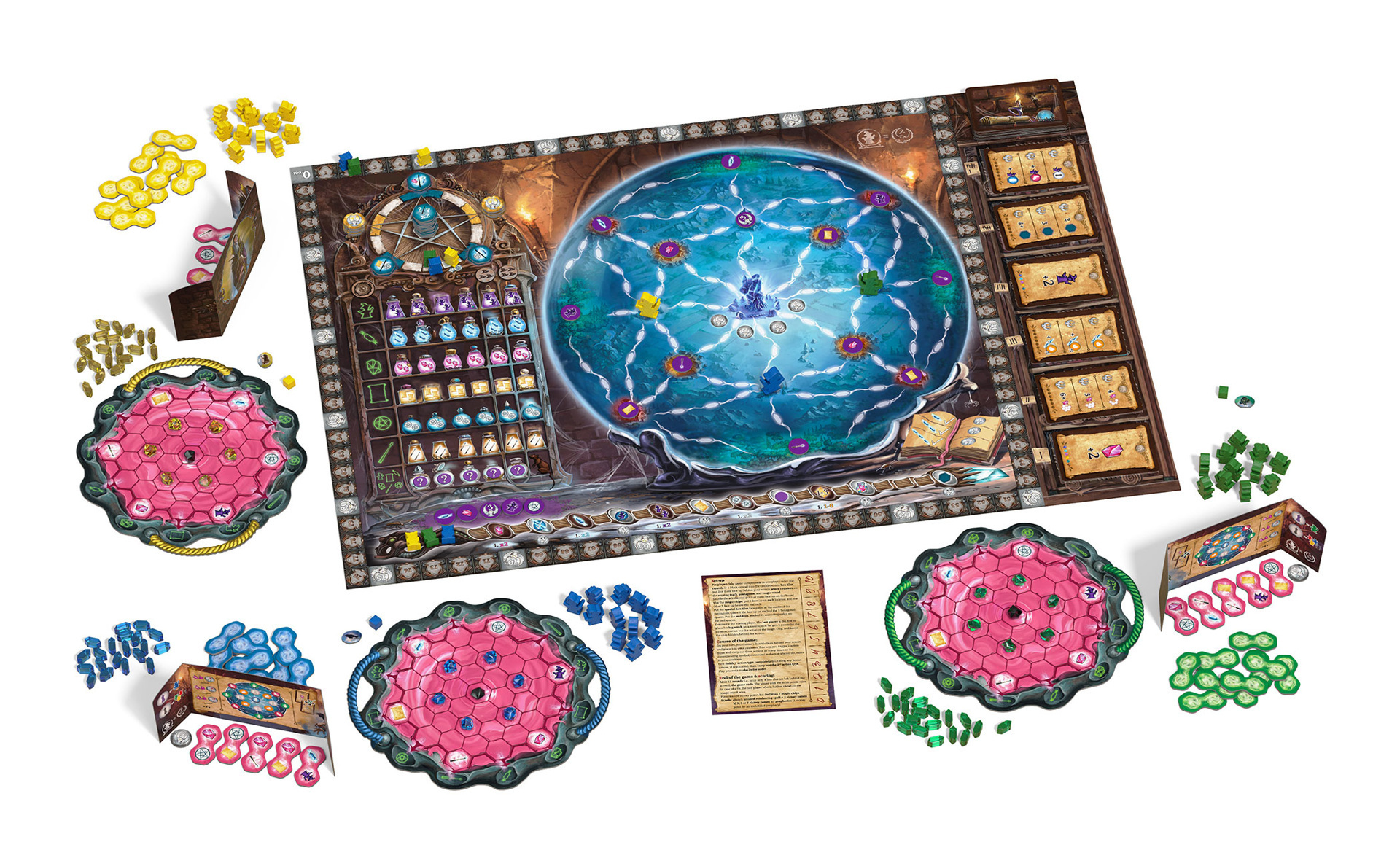 Witchstone’s most obvious influence is Ingenious, a 2004 design from Knizia. Both games have players laying down tiles that are formed by two hexes connected on one edge, ideally connecting similar icons together on the board. In Ingenious, connected tiles give you more and more points in certain colors, with your overall score being your weakest color. The idea of changing the growing number of points to a growing number of actions feels absolutely dangerous, full of runaway leader problems or game-breaking corner cases, but here it is worked out masterfully in Witchstone.

The actions present in the game feel completely like a Stefan Feld game; at first you see six disparate mini games, but you quickly realize they are cleverly intertwined, much like in  The Castles of Burgundy. I feared that each player having their own cauldron to play their tiles would lead to multiplayer solitaire, but that was not the case. Several systems are directly connected, such as the energy route-building and the witches claiming various territories on the board — and once claimed, they’re not available for other players. Likewise, players get an advantage by being ahead on the magic wand track, or by moving around the pentagram track first, and players may also vie for specific scrolls with the scroll action. None of it is heavy interaction, but all of the small interactions add up, in a good way.

And of course, the main draw is watching the actions naturally get better and better as your cauldron fills with tiles. I also thought this would lead to excruciatingly long turns, but I was wrong. Combo-tastic turns are still possible, but because most actions, when improved, aren’t that much more complex (e.g. “place 3 energy tokens instead of 2”), players get to feel a growing sense of accomplishment and “cool combos”  without the 5-minute-long turns of a deckbuilder like Dominion.

Scoring, while not necessarily hidden, is certainly obscured, but players definitely can have a sense of whether they’re “doing well” and a rising tension throughout the game. You get 11 turns and that’s it. It can feel especially stressful those last few turns, trying to fully finish every scroll you’ve collected. Early on, the race to get all of your witches on the board and collect magic chips before everyone else gives a sense of urgency as well, and the flow from one to the other is very natural.

Honestly, the only thing I can think of as a negative about Witchstone isn’t even negative: it feels so tightly and carefully designed that expansions might do it more harm than good, and I’d be wary of them. Well, and I also find the theme problematic, in the sense that I’d rather have something else. The components are great and so is the color scheme, and if it was a bit more cartoony or “Saturday morning cartoon” with the witch theme, it would be fine. But while I rarely find games offensive, I decided a while back that I wanted a board game shelf where any visitor could ask about playing any game without me feeling like I have to hide a game because of its theme, and the pentagrams in the game are just enough for me to not want it around certain members of my church. Your mileage may vary in that regard, of course.

Regardless of the theme, Witchstone is a masterful design. Midway through the first game, I was already eager to play again, rethinking how I’d approach various parts of the game, and I’m looking forward to doing just that.