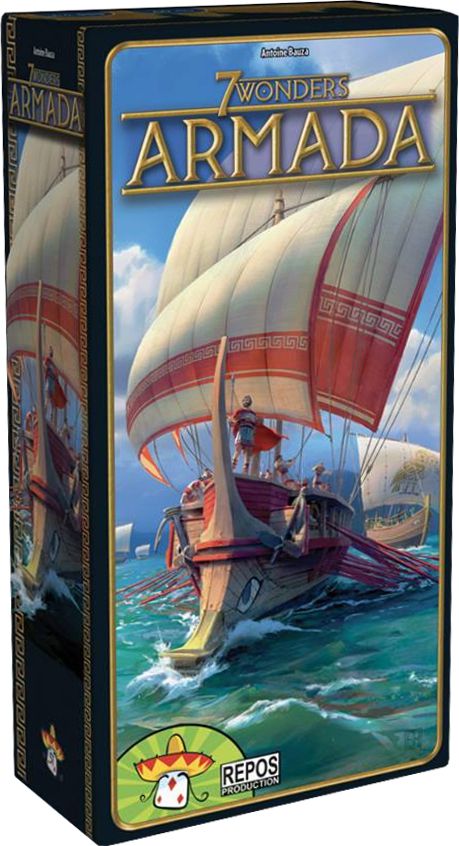 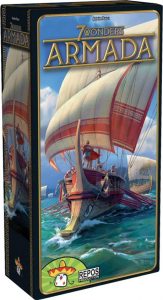 In 2011, the Spiel des Jahres (“Game of the Year”) jury created a new “Expert / Connoisseur” category, almost entirely because of 7 Wonders. They knew it was an incredible, award-worthy game, but it was too complex for their standard award aimed at families, and they had already suffered the mistake of giving the family award to the similar-in-spirit Dominion. A game so good it forced the creation of a new award? Yes indeed, 7 Wonders has been a personal favorite of mine since its release. So it’s no surprise to see it here with its fourth big box expansion, let alone several small expansions. Are we fatigued yet? Let’s find out!

The game has a theme of civilization—including war—but the art here is all from a high aerial view and doesn’t have any real “action shots”.

First, some perspective on my tastes in 7 Wonders. I love drafting, and I love the idea of being initially open-ended, and letting the card flow and your opponents guide you into a strategy that you can then refine in Ages II and III. I hate the idea of being “told” how to play by game mechanisms, like when you are given a certain Wonder board that really only works well if you pick a particular strategy, and if the stars don’t align, you have no chance. (And if they do align, no one else does.) So, I’m very “meh” on the first expansion, Leaders, as well as the third, Babel, for this reason. However, 7 Wonders: Cities simply gives you more cards to choose from, and some new strategies to pursue. It’s a fantastic expansion, and I’m happy to say that Armada is mostly in the same vein, strategically.

Even so, Armada is definitely its own beast. The big new addition is that players get their own personal naval board, with four different tracks corresponding to red / military, yellow / commerce, blue / civic, and green / science cards. When you play cards of those colors, you can move your little boat (there’s one on each track) up one space by paying the extra cost on the naval board. You get a variety of different bonuses, depending on which track, and the player boards are somewhat asymmetric—the rewards are the same, but the costs vary.

Unsurprisingly, progress on the blue / civic track grants victory points. The green / science track provides access to a new “Island” deck of bonuses, many of which increase your science symbol counts. (I ended one game with 10 copies of the same symbol!) Yellow / commerce provides extra coin, and a new way to make other players lose coins, while red / military provides a new style of combat (naval) where everyone competes again everyone else. Overall, these effects are a mixed bag. 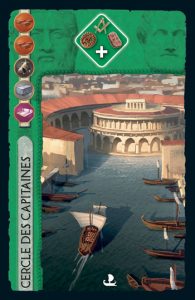 The red and yellow tracks have good intentions, but they don’t work well enough. The idea is to provide some interaction across the entire table, instead of only your left and right neighbors. So, the naval combat is done by ranking everyone against everyone else, and the yellow taxes affect everyone as well. However, the player boards are so tiny—and 7 Wonders is already such a mess on the table—that doing all the bookkeeping necessary is too much of a headache, often for no reason. (A player might completely ignore naval combat, and often when someone announces a tax, it doesn’t actually affect anyone.) Meanwhile, the blue track is simple enough, and by far the most fun addition is looking through the Island deck for crazy new bonuses. This expansion definitely ramps up the potential for crazy scores, as in our first game, the lowest score was the highest score that player had achieved in 7 Wonders (everyone was between 100 and 150—playing also with Cities).

Speaking of other expansions, the rules now also say to only play with two expansions at a time. Cities and Armada play naturally well together, and the rules explain how to use Cities’ debt mechanic with Armada‘s taxes. This leads to 9-card hands each Age and crazy scores, but it lets players further develop their combos and maintain the flexible play that I believe is a core strength of 7 Wonders. While I do think the new boards and boats are too small and too much of a bookkeeping chore (not to mention, my boards are already warped), this is a far better expansion than Babel or Leaders. It integrates naturally into the gameplay, and would be a fine first expansion to teach players who know 7 Wonders and want to take the next step.

Thank you to Asmodee North America for providing a review copy of 7 Wonders: Armada.

After the mediocre Babel, Armada is a welcome addition to 7 Wonders, and I'll be playing it nearly every time I'm at a table of experienced players.