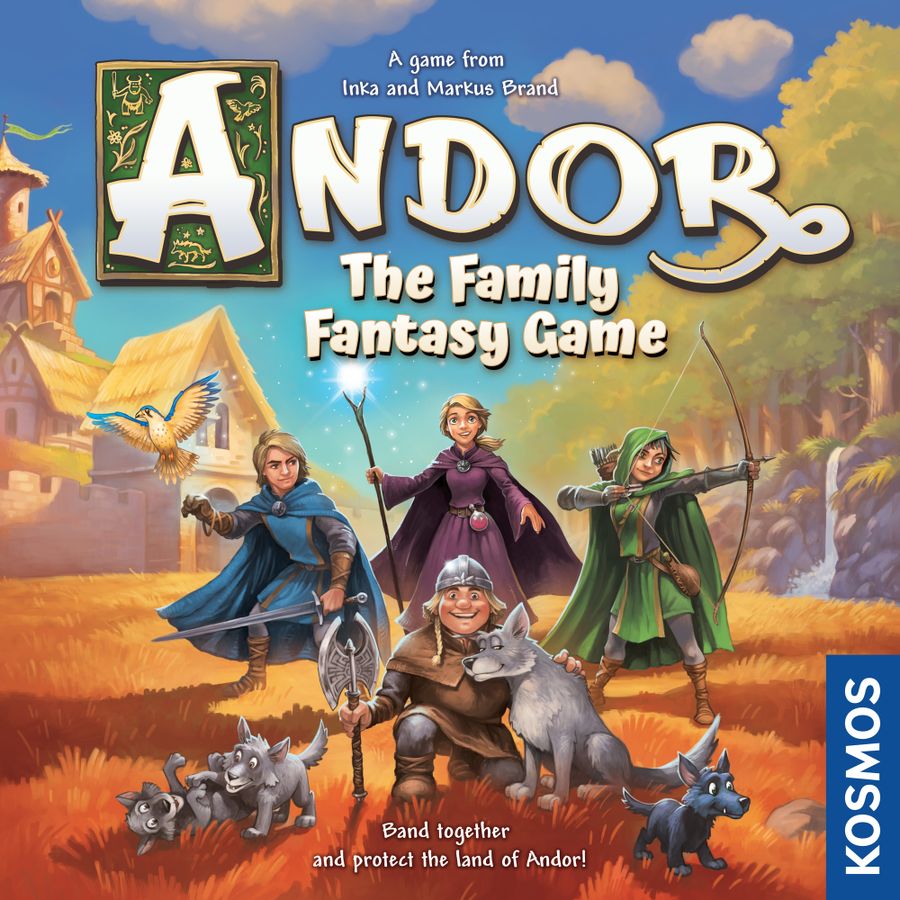 Any time I see the names Inka and Markus Brand on a game box, I’m immediately interested. This duo is among the most versatile designers in the entire industry, and Andor: The Family Fantasy Game is their latest offering.

In this game, players set out on a quest to explore the titular land of Andor and rescue 3 lost wolf cubs. Along the way, they work together to fulfill scenario-specific objectives and keep monsters at bay. The game is played on a board with 2 distinct areas: the land around Andor’s Rietburg Castle and the dwarven mine where the cubs are trapped.

Every player controls 1 of 4 unique characters – the magician, the warrior, the archer, or the dwarf – and each character has their own special dice and tableau board.

During setup, the main board is seeded with face-down tokens. Throughout the game, when someone lands on a space with one, it is revealed and resolved. Some tokens are good, others are bad. Additionally, a number of cards are dealt to the side of the board. These represent challenges players must fulfill before they will be allowed to enter the mine. (Thematically, these tasks come from the bridge guard; he won’t let players pass until they are done.) 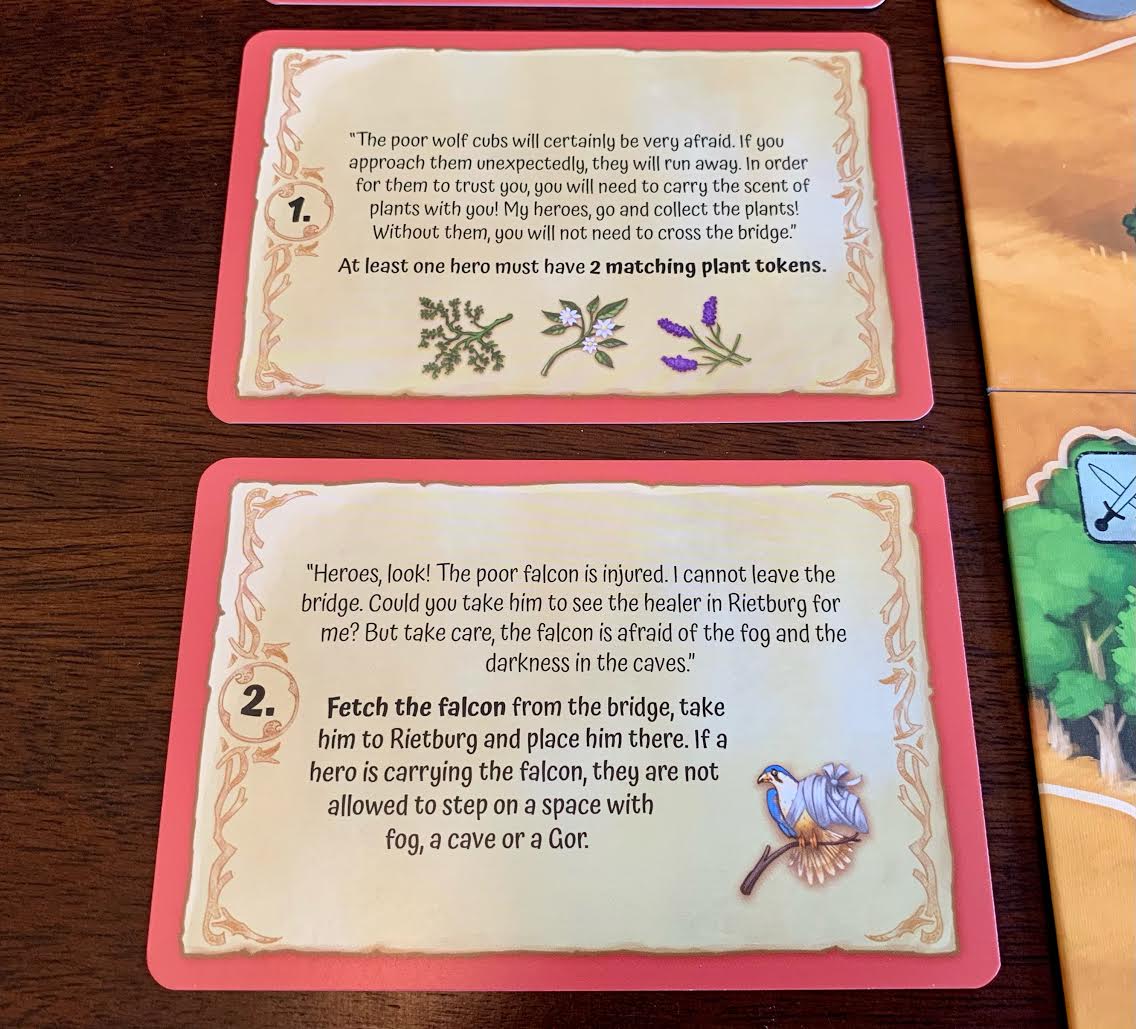 Each round of the game consists of a day phase and a night phase. During the day, players take turns moving and executing actions. The yellow tokens on players’ tableaus indicate how many moves they can make during the round; each move costs 1 token. Thus, a player might spend a token to move once and take an action, then do so again on their next turn, and so on until they run out of tokens.

Most commonly, actions involve flipping face-down tokens or fighting monsters (called “Gors”). Gors can spawn on any of the 8 mountain/forest spaces, and they take either 2 or 3 hits to remove, depending upon which terrain they occupy. Each turn, a player may roll their dice once to attack a Gor in their space; sword results are hits. If they can roll the requisite number of hits before the day phase ends, they remove the Gor. Otherwise, the Gor moves to the next space along the path of footsteps. If a Gor ever reaches the castle, it advances the dragon, which is essentially the game timer. Every night, regardless of Gor movement, the dragon advances and spawns more Gors. If it ever reaches the castle, players immediately lose the game. 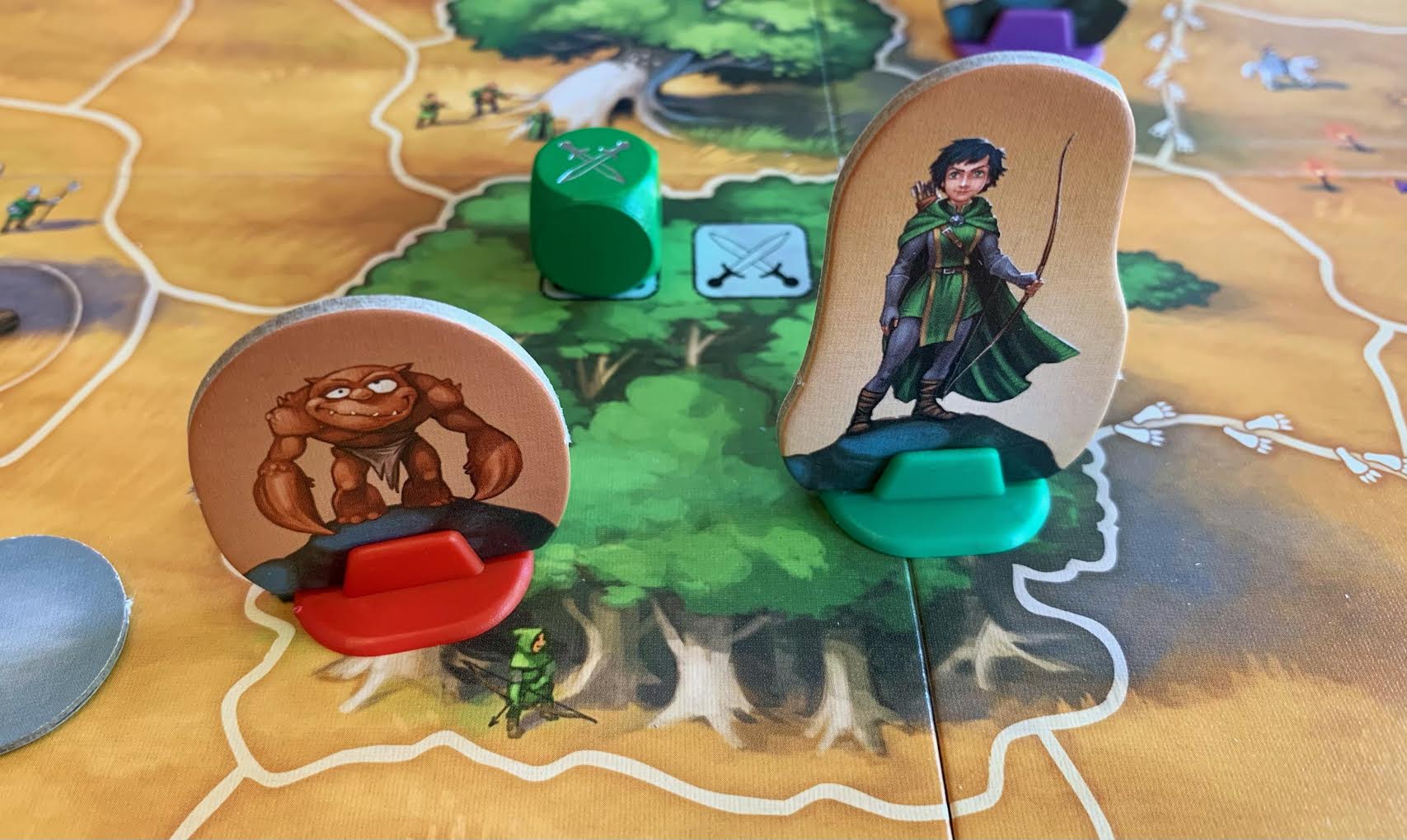 Once they have fulfilled the bridge guard’s missions, players can venture into the mine. Unlike surface spaces, mine spaces require players to roll torch results on their dice to explore. Among the mine tokens are numerous traps, but also the 3 wolf cubs players need to find. As soon as they reveal the last cub, players immediately win! 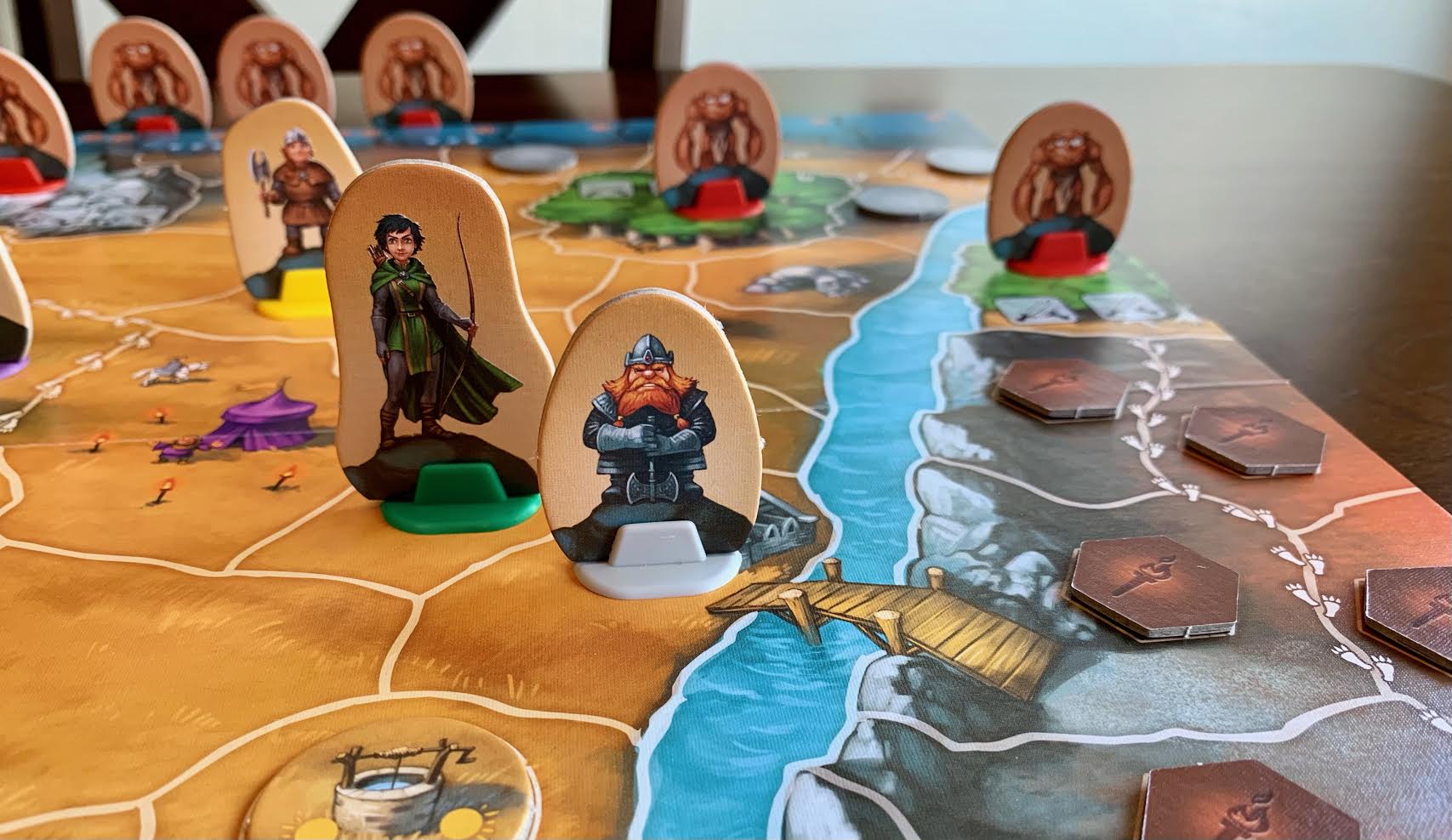 “YOU SHALL NOT PASS… until you complete a couple of side-quests for me.”

Andor is yet another strong offering from Inka and Markus Brand. This game does a fantastic job distilling the essence of a grandiose adventure game into a package that kids and adults alike can enjoy. Now, I should say that I haven’t played the original Legends of Andor, so I cannot make a comparison there, but even as an adult, I enjoyed Andor: The Family Fantasy Game.

Of the many hobby games that have been adapted for kids, this is among the best, right up there with greats like My Little Scythe. Andor simplifies traditional adventure/dungeon-crawl rules to make the game highly accessible to young players. As an example, characters in this game don’t have health points, and enemies do not fight back when attacked. This means a lot less bookkeeping that might be confusing to a child. Likewise, all combat is melee-style; there are no ranged attacks. Typically in games like this, an archer character would play very differently than a swordsman, who in turn would play differently than a mage, etc. Since Andor handles all attacks the same way, however, it is much easier for a kid to understand what is going on. That said, though, the characters all have unique strengths, so each player still feels like they are contributing something special.

With 10 different missions from the bridge guard to try, this game has some versatility. Players can easily modulate the difficulty by adding or removing missions, which means they won’t feel like they are always playing the same scenario over and over.

As its title indicates, Andor: The Family Fantasy Game is a game for families. It is an excellent stepping-stone for kids who are interested in the tabletop hobby but may not be quite ready for complex strategy games. Because of its simplicity, it probably won’t be a good fit for all-adult game groups, but in settings where children and adults are playing together, it should be a home run.

As a stepping-stone for youngsters interested in tabletop gaming, Andor is a home run. It's great for groups of mixed ages and skill levels.