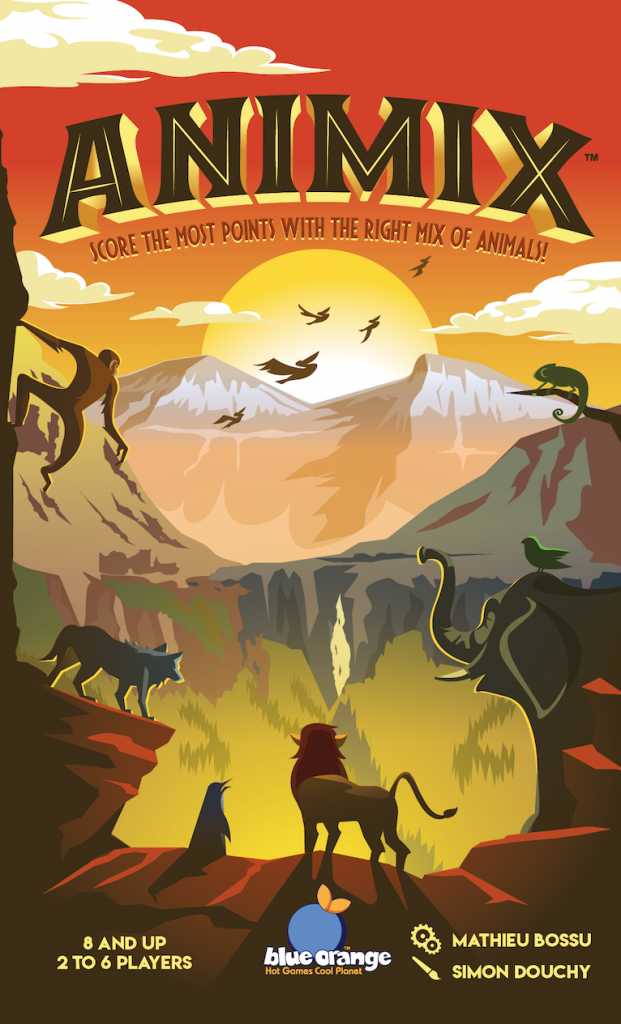 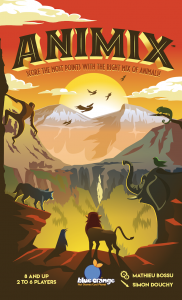 Animix is a new card game from Blue Orange. In this game, players try to earn the most points by strategically claiming animal cards in an effort to have the most of each type. The scoring depends upon the arrangement of cards in a central grid, but points are only awarded to the player with the most of each animal in their personal tableau. It is a good game for teaching spatial strategy to kids.

Animix is one of those games that is so simple I wish I had thought of it first. This 5- to 15-minute hand management game is played using a grid of colorfully-illustrated animal cards. The size of the grid and the number of animal types used depend upon the number of players, but when set up, the game will look something like this: 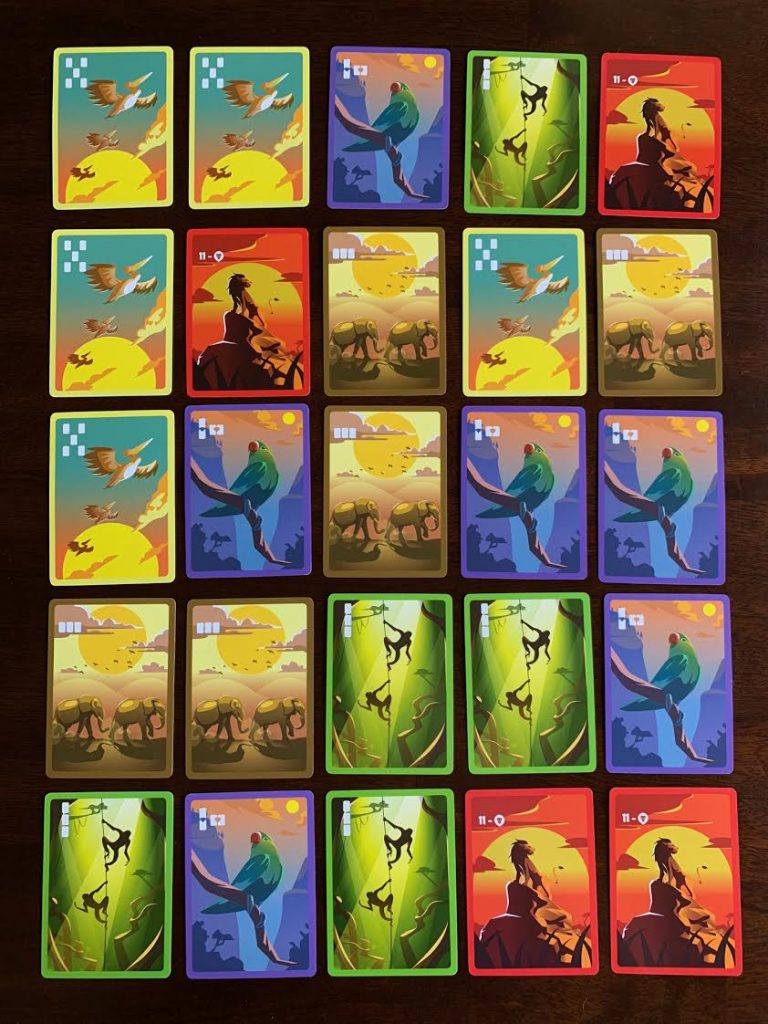 Each player begins with a hand of cards. 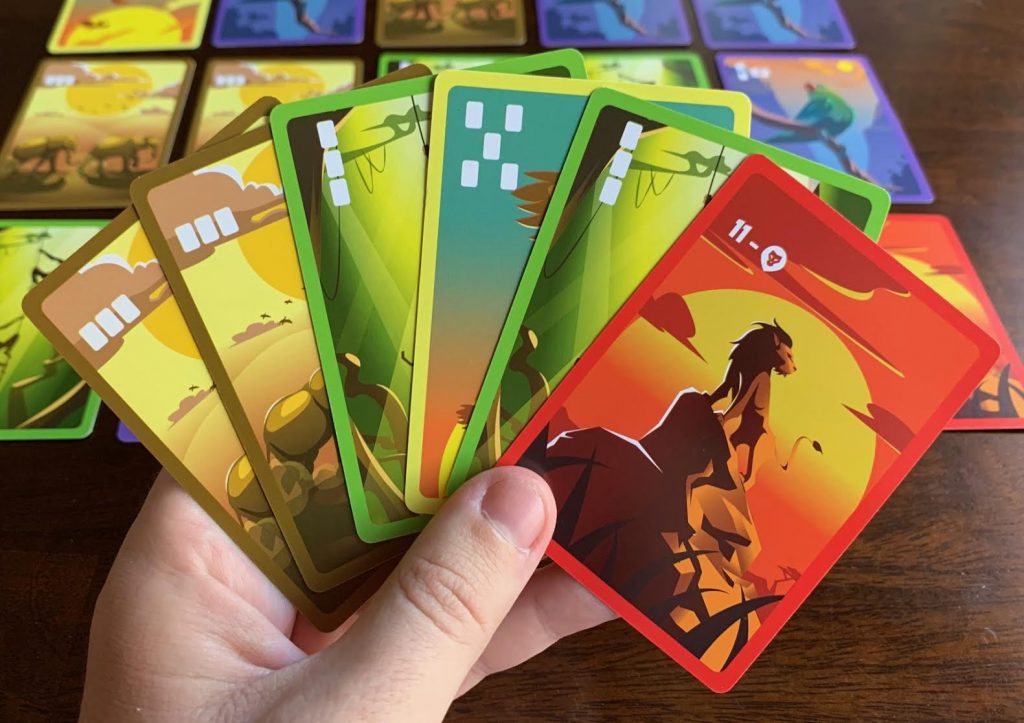 Players take turns choosing a card from their hand and either:

When a player exchanges a card with one from the middle, they place a token on it, locking that card for the rest of the game. Players may not pick up cards with tokens on them. 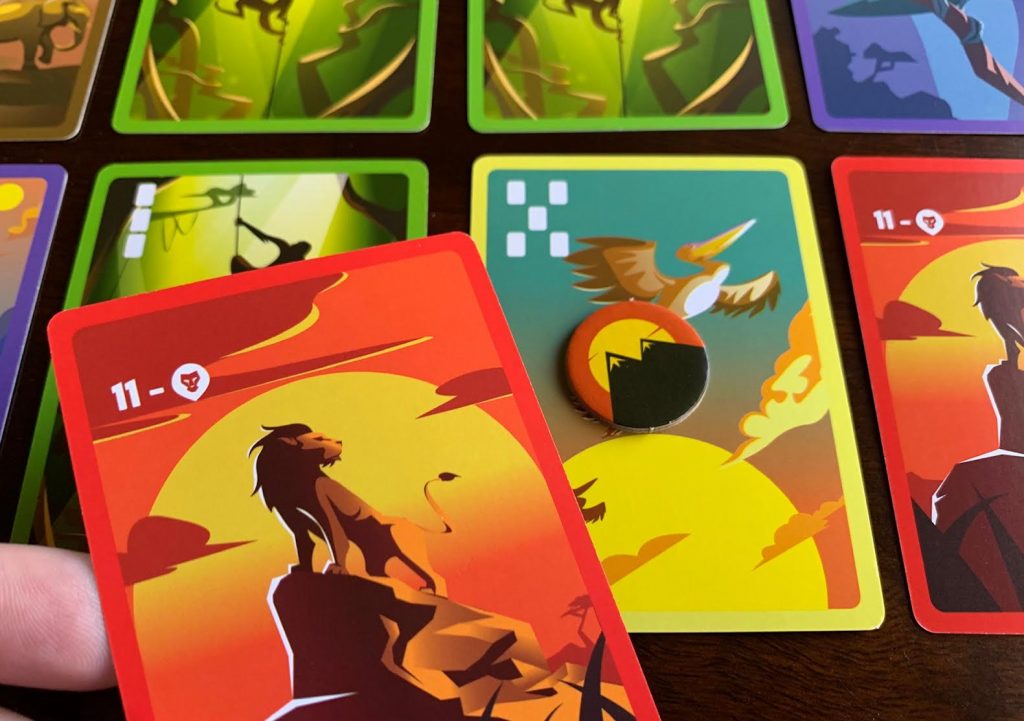 Here, the player exchanged a pelican card from his hand for a lion card from the center. He puts a token on the pelican card, indicating that it is now locked.

As the game progresses, the options become tighter as more and more cards get locked. When all players have played their last card, the game ends and everyone reveals the cards in their personal tableaus. For each type of animal, the player who possesses the most cards scores points according to the animal’s scoring criteria. Some examples are:

The animals used can vary from game to game, so Animix offers a bit of room for customization and variability. Whoever has the most points at the end wins!

Animix is a lot of fun. It has a nice push-and-pull between wanting to strategically place cards in the grid, but also wanting to withhold them in an effort to have the most of each type of animal. In this regard, it reminds me of the popular game Arboretum, but a much more simplified version. It is a great game for kids, and it offers just enough strategy to keep adults interested, as well.

The gameplay is lightning-fast, something like 2-3 minutes per player. This makes it easy to play multiple rounds back-to-back, switching up the animals in between to present a new challenge. The art is colorful and vibrant, and the magnetic-clasp box is a nice touch. All in all, this is a game that looks nice and plays great. Highly recommended for kids and families.

Animix has that "classic" feel, with ultra-streamlined gameplay. A great choice for kids and families.