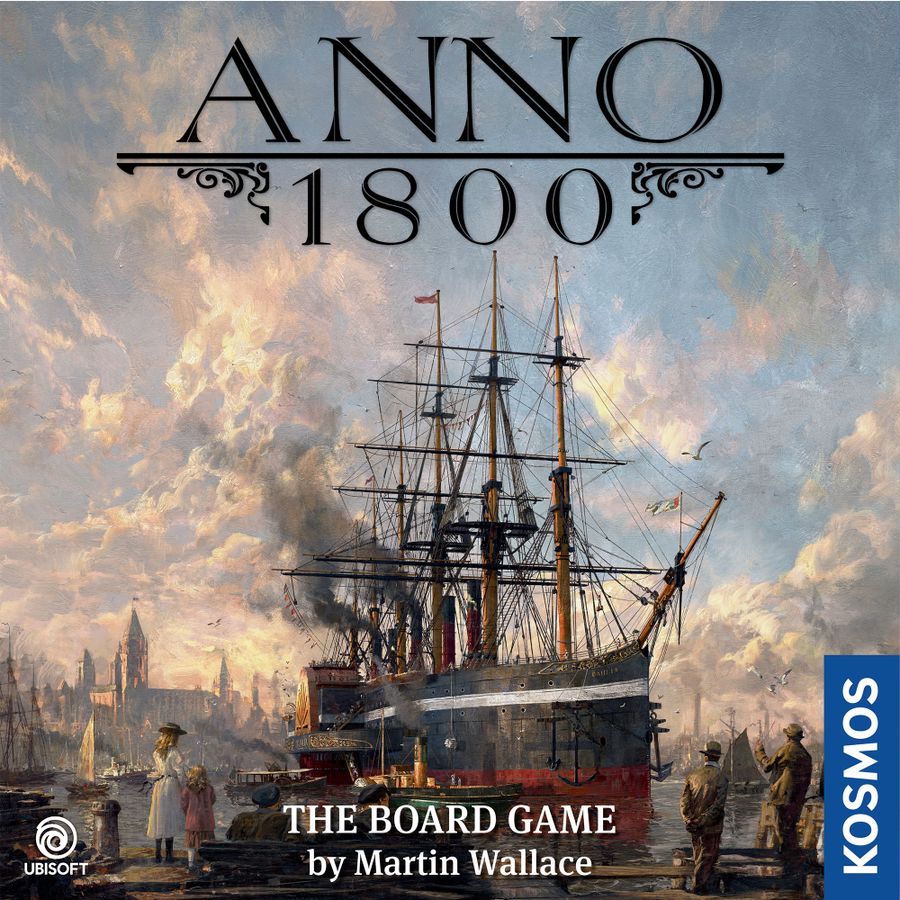 Anno 1800 is a board game based on the Ubisoft PC game of the same name. In Anno 1800, players work to establish an island town in hopes of turning it into a hub of industry. They will face all manner of challenges along the way, but the reward for success will be vast. Are you up for the task?

The latest release from renowned designer Martin Wallace, Anno 1800 is a strategic euro game of building a community from the ground up. Each player controls their own island tableau, which they use to produce resources, build new structures, and expand their influence. The goal of the game is to earn the most points.

Throughout the game, players take turns executing 1 action. Most actions require resources to carry out, so players need to establish as efficient a tableau as possible. To produce resources, players move their population cubes to workplaces around their islands; the resources produced can only be used that turn. Players can also use resources that other players produce by spending trade tokens.

When a player moves a cube to a workplace, that cube becomes unavailable until it is retrieved. There are 2 ways to retrieve a cube: spending gold or spending an action. A player may spend 1 to 5 gold to retrieve a cube, depending upon its color, or else they can spend an action to retrieve all their cubes at once, for free. The different colors of cubes represent different trades—each color has a different value and is used for different types of constructions.

Players have numerous actions to choose from each turn, but for the sake of brevity, this review won’t dig into each one individually. (Interested readers can view the rulebook here for more details.) However, as a general overview, the actions allow players to do things like:

Most commonly, players will be constructing tiles, playing population cards, and retrieving their workers. The other actions are done less frequently.

Population cards act as the game timer. Whenever a player takes new cubes, they take corresponding cards as well, which extends the game. Play continues until someone has used all the cards in their hand. In practice, this means that the game lasts until a player has built a tableau that is “self-sustaining,” i.e. they can use efficiently without needing additional cubes.

At the end of the game, the player with the most points wins!

Anno 1800 has many Martin Wallace hallmarks. Much like Steam or Brass, this game is very tight at the beginning and gradually opens up as players expand their engines. It is also strongly economic in nature, causing lots of internal monologuing like “I want to do X, but in order to do X I need to first do Y, which requires Z resources…” and so on. It calls for long-term planning at every step. Its game arc is also reminiscent of other Wallace designs: it starts off slowly as players get their feet under them, then accelerates a little, and then *BAM* the game is over.

I hardly ever enjoy games from this designer, but this one genuinely works for me. I think the reason is the bizarre, paradoxical interplay at its core. A player’s overall goal is to empty their hand of cards, and in order to do that, they need population cubes, but each time they take a new cube, they take another card with it, thereby adding to the hand they are trying to downsize. It sounds weird, and it’s difficult to even explain, but in essence, players aim to spend all their cards by… taking more cards. This backward dynamic is totally unique, and it drives the whole experience.

While the gameplay of Anno 1800 is really solid, its production is pretty plain. The components are all functional, they just don’t look exciting. I would have preferred if the cardboard tokens had been wooden bits and the cubes had been slightly larger. Also, there are 2 shades of blue cubes, and they are easy to mix up. It would have been nice if the colors had been more distinct. That said, the cards are nicely illustrated and show a diversity of ethnicities, which is a major positive in my book.

All told, Anno 1800 is a robust strategy game. It is one of the rare Martin Wallace games that I find deeply engaging, so it was a welcome surprise. I should note that I have not played the PC game Anno 1800, so I cannot draw a comparison there, but for fans of strategy euro games, the tabletop version is definitely worth checking out.

I rarely care for Martin Wallace games, but Anno 1800 is a notable exception. Though somewhat dry and mechanical, it is a robust euro game with a very unique push-and-pull.