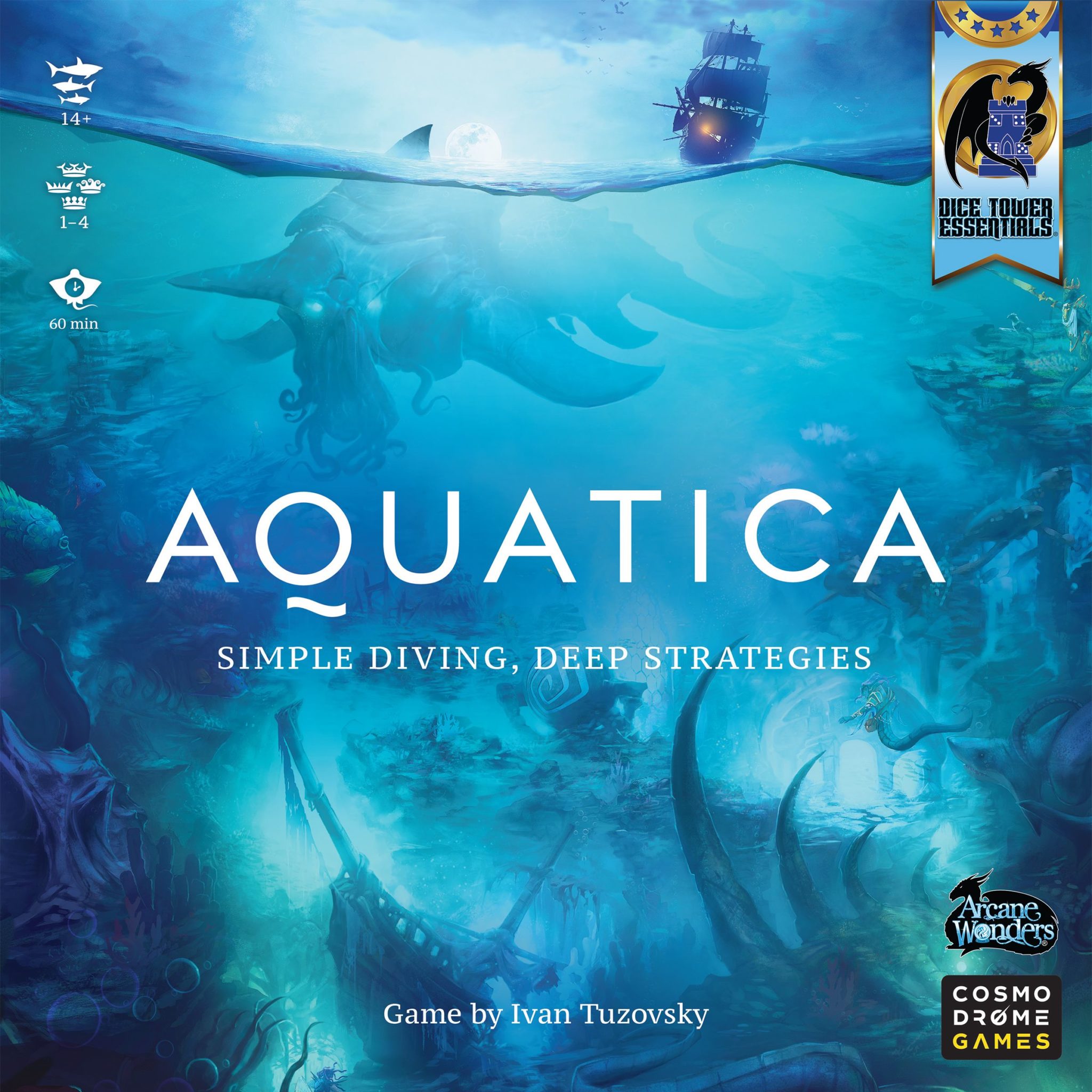 If you were to ask me my favorite games, I would probably rattle off Dominion, Star Realms, 7 Wonders, Race for the Galaxy, and Res Arcana without really thinking about the order or the other genres that I enjoy. Nothing gets me ready for game night as much as a card game full of special powers and drafting, deckbuilding, or tableau building. So when I heard about Aquatica’s unique gameplay, I was quite excited. Justifably? Let’s see! 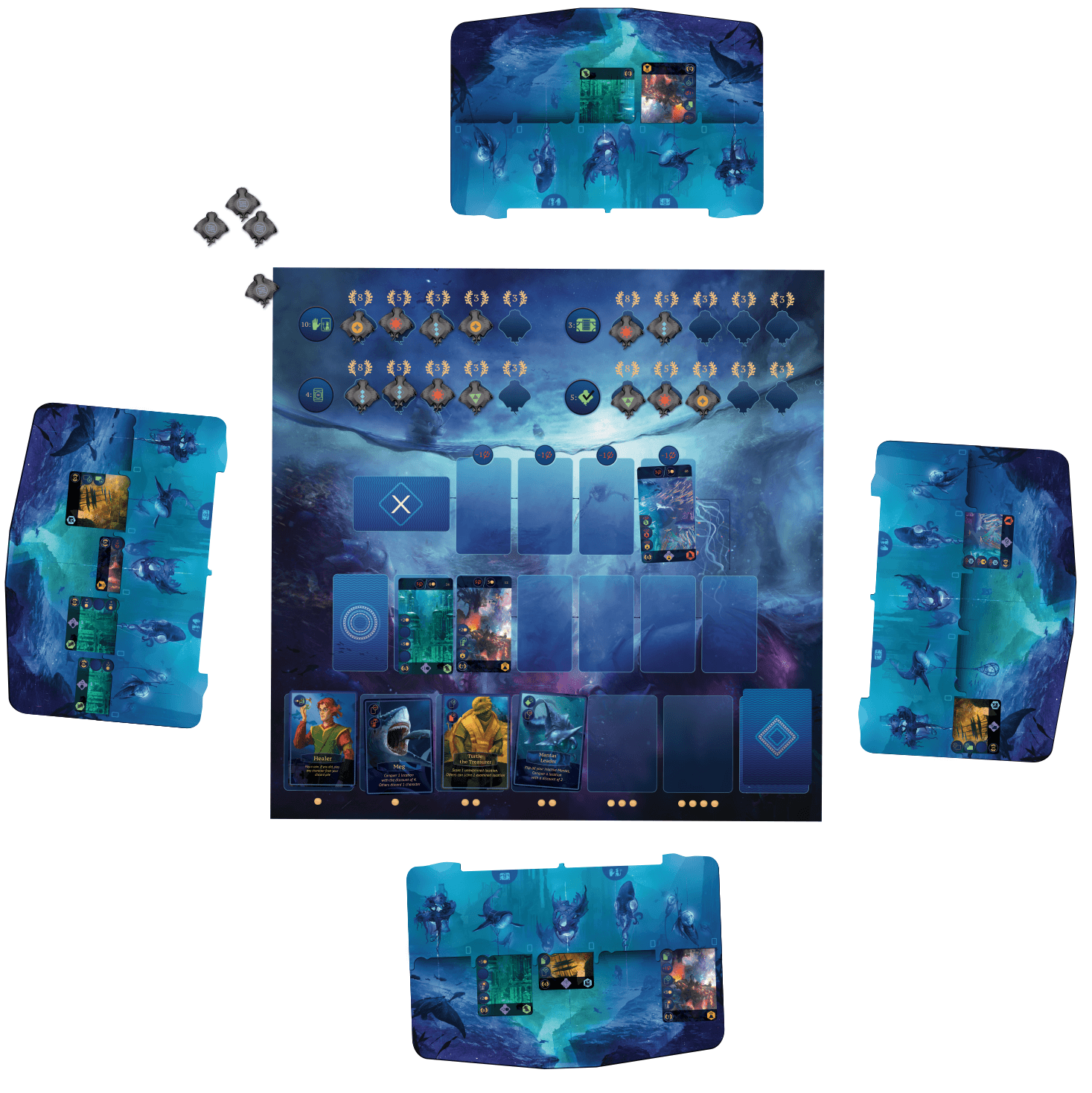 Aquatica is made up of two seeming disparate parts: first, players play Character cards from their hand in a system ripped straight out of Century: Spice Road which was itself ripped from Concordia and Mission: Red Planet. Players can recruit new Character cards, but eventually must play a certain Character to recover their hand of cards and play them again. But, what are you doing with those cards to actually win?

You are either “conquering” or “buying” Locations, which again sounds like Spice Road or any other engine builder: use the engine’s machinery to get the thing that gives you points. So, what’s the twist? The twist is that the Locations are the engine!

When you buy a Location, you place it on your (very cool) player board and tuck it in one of the five slots. As you use its abilities, you push the location further into the board, until all of its effects are gone, at which point you can score the card for victory points. This system is incredibly fun; chaining location effects to do a bunch of pushing in one turn is immensely satisfying. It also has a Dominion-like self-correcting aspect to it, where your engine ebbs and flows as Location abilities disappear and then new ones appear in their place.

Aquatica plays quickly, too. The third concept in the game are goals that players can do for victory points, and they have a similar ebb and flow: claiming them requires you to sacrifice bonus actions from your “Mantas” (chunky pieces that are just as cool as the player boards). It’s relatively easy to claim the standard goals; we found our two player games ending comfortably under 30 minutes. Fortunately, the game comes with alternate goals to mix the game up.

So what’s not to like? Well, the game feels a bit rough round the edges. Some of the timing rules of Locations are unnecessarily confusing. As a byproduct of the player board interaction, the Locations are a really dumb card size that may not even exist outside of this game. But the big thing is this: the Locations serve as both the VPs and the engine, so why do the Character cards even really exist? It’s an unoriginal system and often it feels completely unnecessary to get more Character cards. I would think the whole design could be tightened up considerably by having a system where Locations then earn you more Locations, and the Character cards don’t even exist. It feels like they got the design 75% of there, and they found the fun, but then didn’t refine it enough.

Yet, is there really such a thing as “imperfect fun”? The reality is that the game, especially the Location “push” system, is incredibly fun, flaws and all. I’m looking forward to my next plays, and we’ll see if the upcomnig expansion refines the experience any.

Thank you to Arcane Wonders for providing a review copy of Aquatica.

Aquatica is a little rough around the edges, but the fantastic, unique mechanisms rise to the surface.