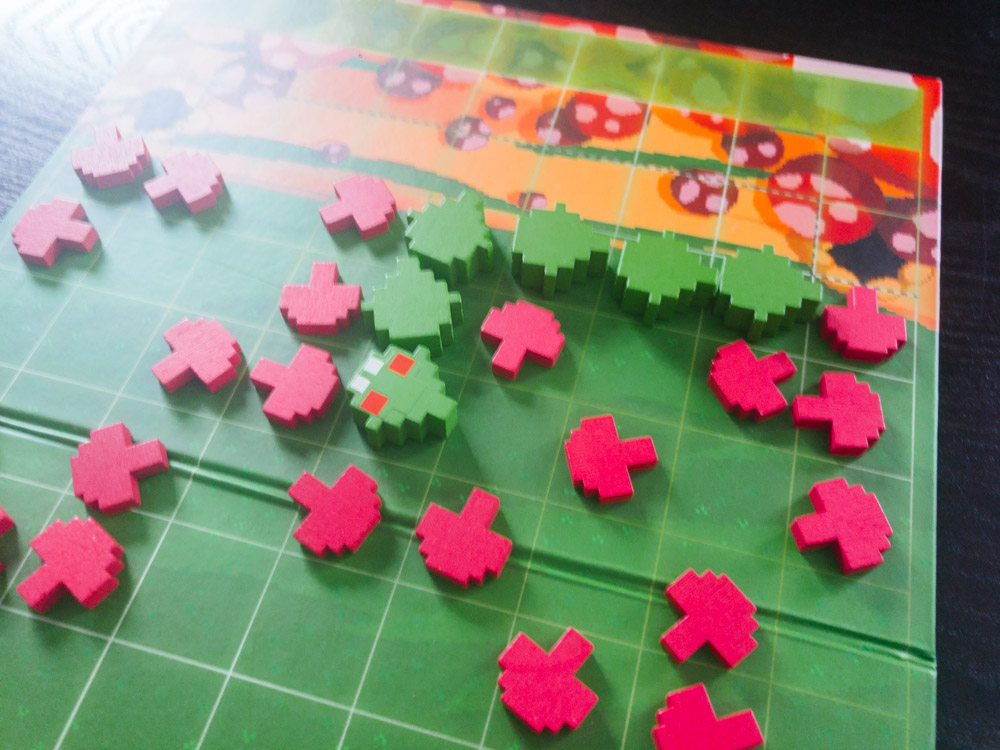 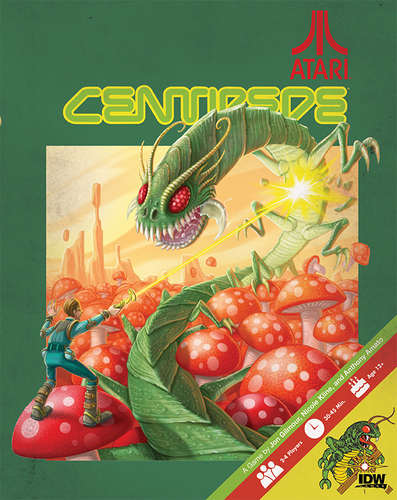 IDW is a comics publisher, with IDW Games as an imprint of IDW, focused on printing hobby games. IDW Games has published Machi Koro, TMNT: Shadows of the Past, and many more. 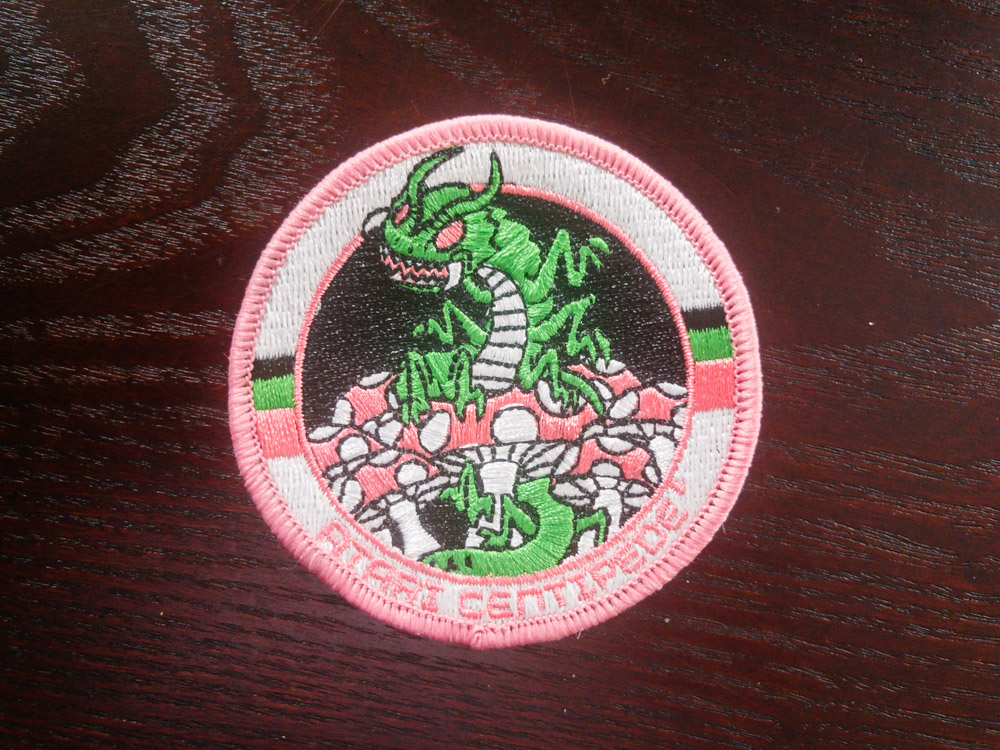 Ah, sir, you seem to have gotten stuck.

The impending popularity of tabletop gaming over the last decade or so deems the inevitability of seeing a slew of classic video games and other IPs transformed into decent board games. In times past, we’ve been used to garbage like the games your auntie picks out for the holidays, like the LOST: Trivia Game, or Monopoly: Star Trek.

In this tabletop golden age, hobby gamers (and even those outside it) are finally getting royal treatment. The excellent two-player Star Wars Risk (reskin of Star Wars: The Queen’s Gambit) dropped after The Force Awakens, putting every bloated edition of Risk to shame. Sons of Anarchy featured an area control game that some claim is just as good as Blood Rage or Kemet. The Legendary card game from Upper Deck continues to publish IP after IP in their sometimes cooperative universe, three games of which grace my own shelves (Predator, Alien, and Firefly).

Even though we’re treated to many excellent titles from our favorite IPs, we were bound to hit mediocrity at some point.

This is unfortunately the case with Centipede. 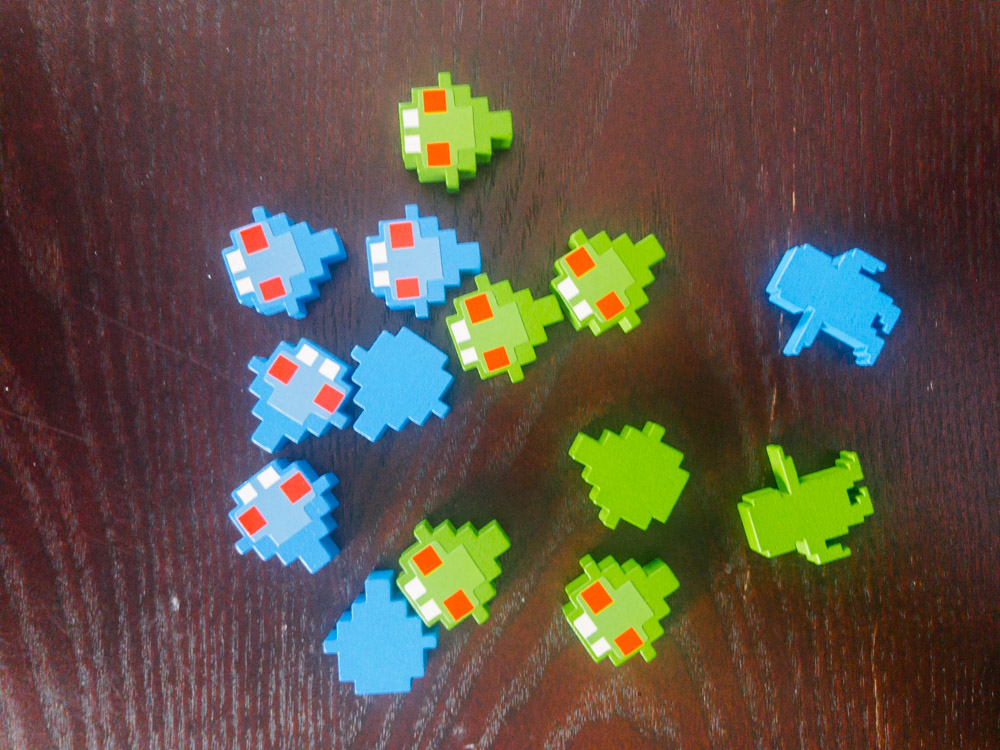 I’m jovial at the thought of having to reapply these stickers.

My examples of other IP-based games allow for much more expansion and theme, sure, and Centipede is just a gnome with a gun trying to blast some bugs. The source material isn’t needlessly expansive, and that’s to be expected.

Centipede is played with either two or four players with two sides. I’ve played solely two player, so that’s where my review will focus.

One player controls the gnome. his goal is to roll some dice, pick a die, and do what it says. This usually boils down to moving a number of spaces on his row, then destroying one or two components in his column. These actions are taken in whatever order the icons on the die depicts from left to right. The gnome player must carefully utilize his dice actions in the best order he can manage. In addition, this player can also activate a few special abilities that allow him to reroll dice, shoot an extra shot, move a bit more, etc. 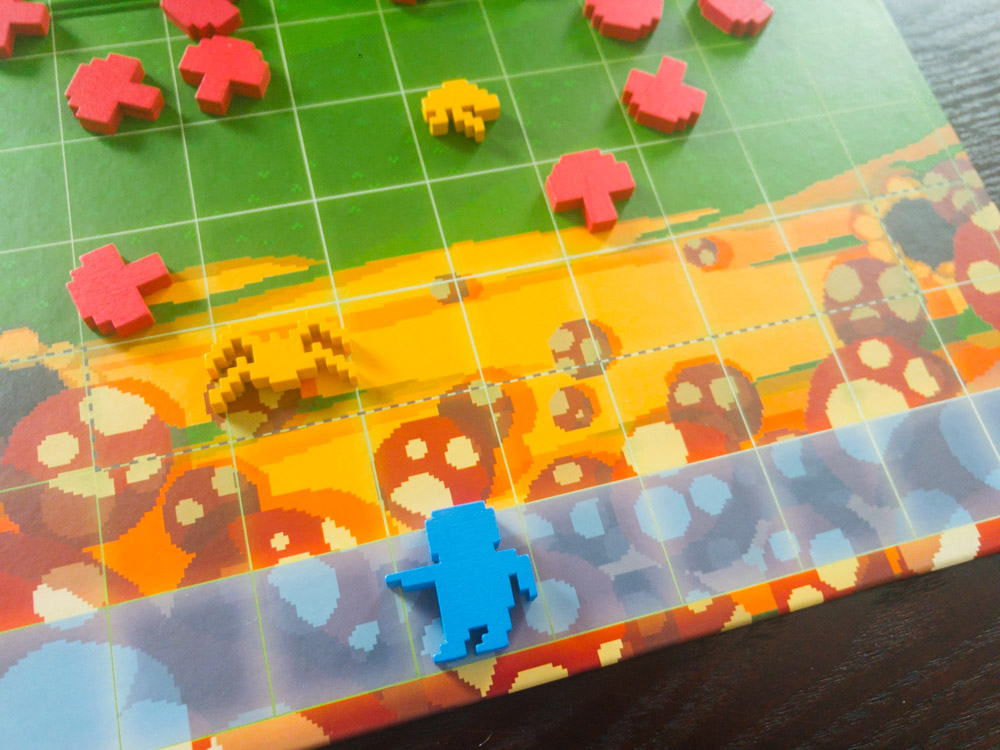 The gnome desperately attempts to kill off the bugs attacking them.

The other player plays as—gasp—the Centipede and friends. On this player’s turn, he will move each depraved section of his creature left or right, depending on the direction it started in. If the Centipede hits a border or other component, it will move down one row. Of course you remember the Centipede hitting a skinny tower of mushrooms from the classic game, in which it would speed down the tower inching closer and closer to your precious character. This happens here as well, and oh, is it fiddly. The length of a Centipede determines its speed, so instead of only moving each section of a Centipede 2 spaces, you might have to move many Centipedes many spaces. It doesn’t end there. The Centipede player also needs to play one of three cards in his hand. This can spawn fleas and spiders (which are objectively overpowered), but also allows the Centipede player to respawn destroyed Centipede segments, jump his Centipede closer to the opponent, or increase the player’s movement speed. 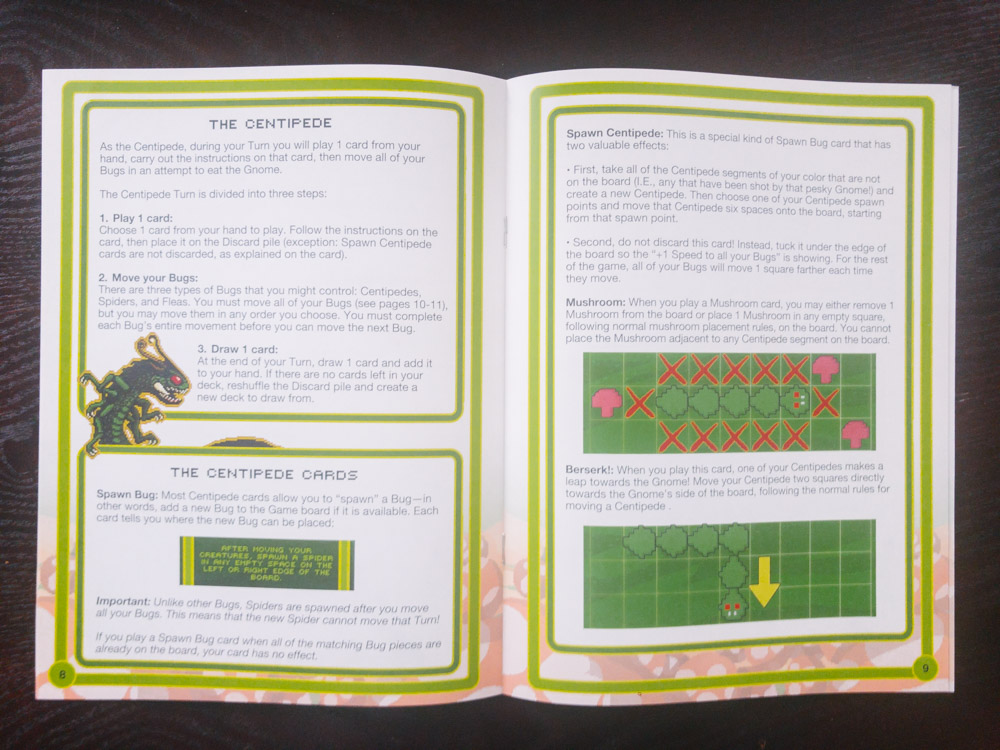 This rulebook is far too bloated and far too long. I feel like I’m preparing for a 3 hour long dungeon crawler with all the pages I have to read.

I try to help readers envision playing the games I review, so let me help describe what playing this game is like. Imagine booting up the classic Atari game of Centipede for a moment. Remember in those olden days when, before you hit start or dropped quarters in the machine, a demo of the game would play? You’d watch the AI control the gnome and bust up some mushrooms, complete a level or two, and ultimately get eaten by the Centipede. Watching an AI demo of a pre-programmed game of Centipede is exactly what playing the tabletop version of this game is like.

I’m not saying every game will end with the gnome losing (but this is common) but everything you do feels scripted and random. The problem is, you can barely work to memorize the scripts, and instead do what the game tells you. It plays itself, which is nice for a demo table at a convention, but unwarranted in practice.

Each round, the gnome moves where the dice tells it, shoots what the dice tell it to shoot, and dies when the Centipede or a spider nabs it. The Centipede turn is spent playing a bug if possible, then systematically crawling toward and around mushrooms. What’s worse is the Centipede player has to make up for the fact that there isn’t a computer available to run the moving of Centipede segments. It’s the most drab and uninteresting role I’ve played in a board game in a long, long time. Every turn I spend moving each gosh darn Centipede segment left and right, it reminds me of an even more terrible time in my life: when I first opened the box and had to slap stickers on each Centipede segment. Stickers. On each piece. On both colors of Centipede. Luckily the game ships with a… backpack patch? To sow onto your backpack for when you take the game to school each day. If you’re budget is right, you can probably snag another two patches when you buy the other two Atari titles on their eventual releases. 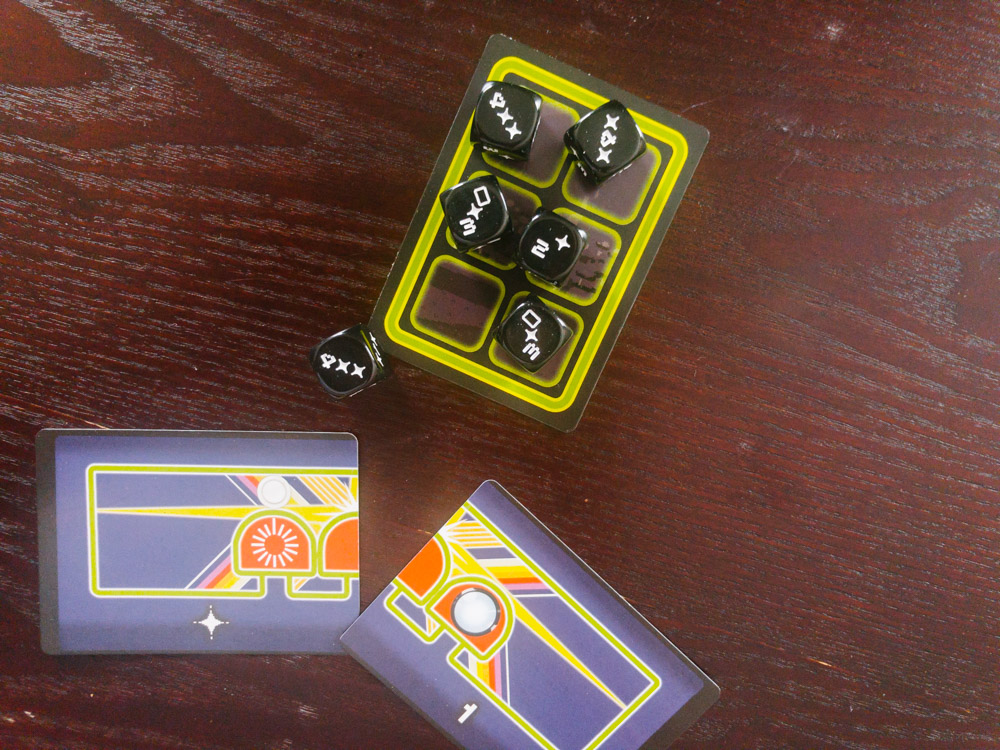 These dice are far too random.

Listen, I’m all for dice mitigation, because Centipede allows the gnome player to do it a bit. Great games let you work with your roll in order to get something reasonable from an otherwise bad roll. This game simply looks at your mess of actions and says, “just use your card to reroll your actions,” then upon rerolling, you realize your options are just as random and inconvenient. There’s no planning, and no amount of planning will help your situation. The setup of the game is spent with both players placing mushrooms around the board, as if that has any effect on the game or it’s complexity.

What’s worse is a game that clearly tries to be simple and approachable for people ends up needlessly complicated. Each bug moves differently, sometimes drops a mushroom, sometimes stops, sometimes gets to move faster if you played the right card, etc. Remembering which bug already moved is challenging and probably up to the sweating gnome player to recall which is which because they’re basically always almost eaten. Of course the rulebook is 14 pages of rules. This game should, I repeat should, be explained in just a few pages, but instead, big blocky text and gigantic images try to compress the instructions into understandable fashion. I ended up a confounded curmudgeon, shaking my head and waiting to hand the game off to a nerdy friend who will use the components for room decor.

Centipede‘s aesthetic is on point. The board is kind of reminiscent of the old game. The gnome, bugs, mushrooms, and centipede segments are all pixely and lovely to hold. The spiders look exceptionally fragile with those tiny legs. The gnome cards are weird, and because they don’t do anything interesting to the game, are excused as a glitch in the programming or by smacking a button on the arcade machine.

Atari’s Centipede isn’t worth your time. Unless you are in it for the components to decorate your computer desk, you are better off finding a flash version of the old game online. This game was a unique opportunity to expand classic Atari games, but instead feels like Atari and IDW rushed the designers to produce something. Perhaps with more time, the game design would feel expedited and to the point. As it stands, don’t touch it. Don’t think about it. Don’t look at it. Well, you can look at it, because the pieces are pretty.

A review copy of Atari’s Centipede was provided by IDW Games. 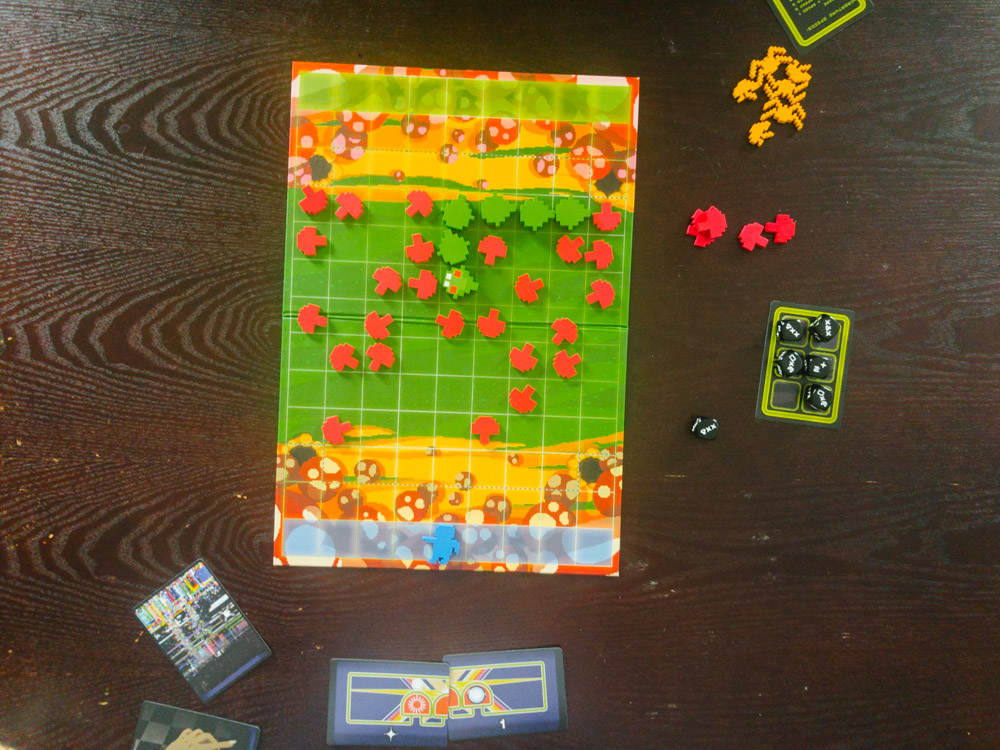 Atari's Centipede is a mind-numbing simulation with senseless options and an exhaustive rulebook. I never say this, but do yourself a favor and never play this game.