"THESE BLOCKS ARE UNDER ARREST!" 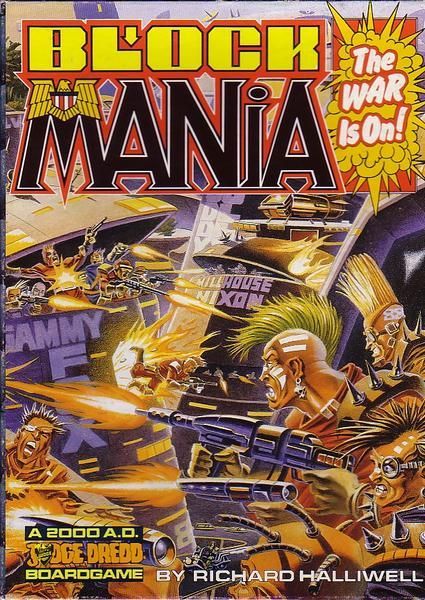 Originally released in 1987, Block Mania brings the titular Judge Dredd epic to the tabletop. In this game, players each control a block in Mega-City One as they duke it out in a bareknuckle brawl. After being out of print for more than 30 years, this game recently returned in a surprise, limited edition re-release. How does it hold up today?

If you are a fan of Judge Dredd, then Block Mania needs no introduction. For those who are not familiar with it, Block Mania is a classic storyline from 2000 A.D., the British comic series responsible for characters such as Judge Dredd, Strontium Dog, and Rogue Trooper. In Block Mania (the story), the residents of Mega-City One—a futuristic, dystopian city comprised of the entire eastern seaboard of the U.S.—go crazy and start fighting with each other. The thousands of residents of each towering city block start blasting their neighbors with lasers, flamethrowers, etc., causing incalculable carnage and destruction.

This building-vs.-building battle is the premise of Block Mania, the game. Each player controls a block, which begins with 4 counters on it. Counters can represent either block residents (called “blockers”) or equipment.

Each turn, the active player rolls 2 dice to determine the number of command points they receive. Command points (CP) can be spent to deploy units or to move units extra spaces beyond their normal allowance. Each blocker has a movement value, a strength value, and a command value. In order to move a blocker, the active player must spend CP equal to its command value; the blocker can then move up to its movement value (or beyond, if extra CP are spent). Certain spaces like the armory and shopping mall allow blockers to gain items, weapons, and equipment. A blocker’s strength value determines the number of items it can carry.

After CP are spent, but before the active player goes trigger-happy, the opposing player gets a “defensive fire” round. If any of the opponent’s blockers are next to an enemy counter, the opponent can take a shot. The blocker must have a ranged weapon, the damage value of which gets added to a d6 roll. After modifiers like defense and opposing strength are applied, if the result is 6 or more, the defending unit is destroyed.

Once these attacks have been resolved, the active player unleashes a firestorm on their opponent’s block. Attacks can be melee or ranged, depending upon the attacking unit’s position relative to enemies. There are several types of attacks to choose from, including shooting, close combat, looting, arson, scrawling, and fire fighting. Each of these has its own rules—for the sake of brevity, I’m not going to dig into them all—but they typically involve standard die-roll resolution.

Once all attacks have resolved, the active player checks to see if any parts of their building are on fire (spoilers: they will be). As the fires grow, they can spread to other spaces, potentially damaging the structural integrity of the block; too much structural damage and the whole block will collapse!

A deck of “Mania” cards acts as the game timer. In the last phase of each round, a Mania card is drawn into the active player’s hand, and when the deck is exhausted, the Judges arrive. At this point, the discarded Mania cards are reshuffled and play continues, except that players now use the “Justice” side of the cards instead of the “Mania” side. When Dredd and crew arrive, they start laying down the law, arresting blockers and removing them from play.

The game continues until either the last blocker has been removed from the board, or until both blocks have collapsed. Players then figure out their scores; points in Block Mania are bad, and they come primarily from damage like looting, scrawls, fires, and of course, building collapse. The player with the lowest score wins.

In addition to the basic Block Mania game, players can also purchase the Mega Mania expansion, which allows the game to accommodate up to 4 players. This doubles the insanity of an already carnage-dripping experience, but also extends the game length accordingly. Happily, the rules remain pretty much the same with more players, so the expansion doesn’t add a lot of extra overhead.

Block Mania is a wild ride. Its frenetic gameplay meshes well with the Judge Dredd theme, providing an experience that is just as crazy and unpredictable as a day in Mega-City One. Games like this are often referred to as “beer-and-pretzels games,” meaning that they are best played in low-key settings where players are just there to have fun without any semblance of seriousness. Just like its source material, this game is incredibly silly, and that is a great thing.

That said, though, Block Mania is definitely a relic of its time, a chaotic dicefest with little strategy and lots of potential for huge swings. As I understand it, the new printing of this game is essentially identical to the original – even down to the components themselves – which seems like a missed opportunity. Games have come an immensely long way since 1987, so it would have been nice if the new version of Block Mania had been “cleaned up” a bit for modern audiences. The mechanism of rolling for command points, for example, is very dated and does not hold up well today. Additionally, there are a number of fiddly rules that necessitate frequent rulebook checks, especially for new players. The rules themselves are rather dense as well, which I suppose makes sense; this game comes from a time before elegance was tantamount in game design. All told, Block Mania feels like a game from 1987.

Still, this game can be fun with the right group. If everyone knows Judge Dredd, they will find that the theme comes through very strongly. Fatties, Futsies, Kleggs, H-Wagons… this game has them all. As such, Block Mania will probably be a good fit for fans of 2000 A.D., as long as they don’t mind some old-school gameplay. If this sounds like your jam, check it out!

Review copies of Block Mania and Mega Mania were provided by Rebellion Unplugged.

Visually and mechanically, Block Mania shows its age, but it works well as an old-school "beer-and-pretzels" romp, particularly for fans of Judge Dredd.