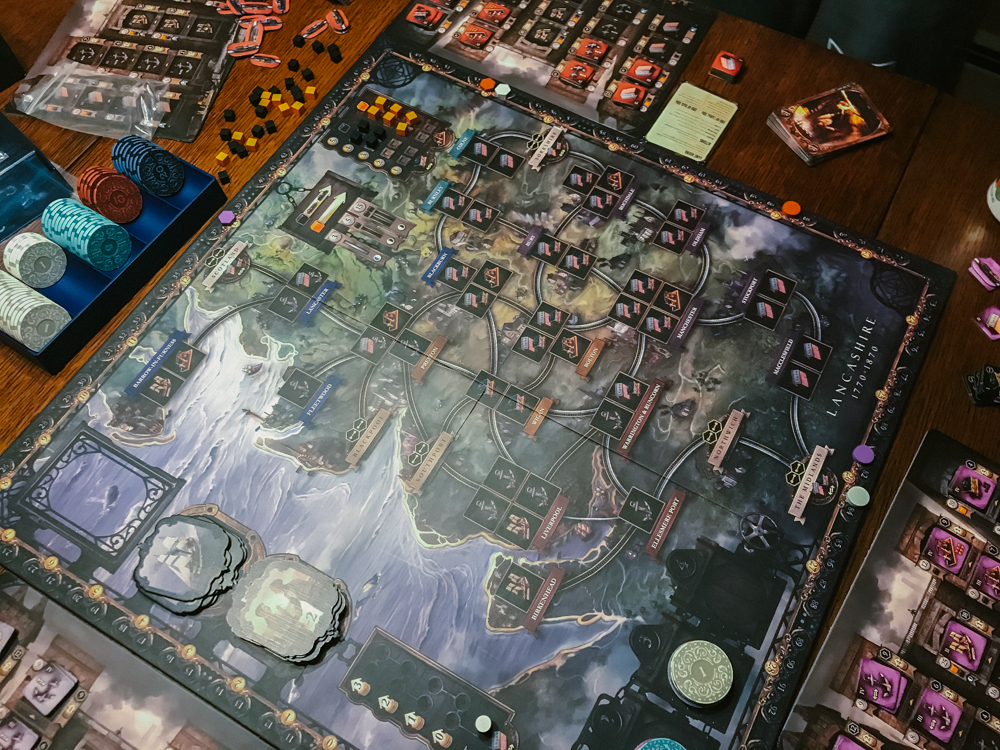 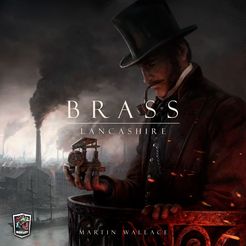 In 2016-2017, Roxley Games teamed up with famed economic game designer Martin Wallace, launching the rebirth of Wallace’s well known title Brass. Deploying an extremely successful Kickstarter, Roxley produced both Brass: Lancashire and Brass: Birmingham. Lancashire is a modernized reprint of the original, with a small bit of mechanical tinkering and a much needed 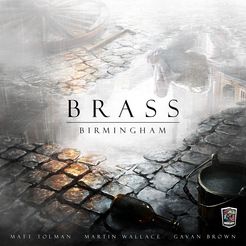 artistic update. Birmingham features new mechanics, such as breweries, a complete rejiggering of the sell/flipping mechanics, and bonuses for selling at strategic locations.

Martin Wallace, known for economic games such as Brass, Age of Industry, Steam, and others, is also the founder of Treefrog Games. Wallace has been publishing games since 1993, with other well known games including A Few Acres of Snow, A Study in Emerald, Byzantium, and many more.

Brass has a storied history. Many hobbyists who’ve been gaming far longer than I can likely recall every intimate detail of each game of Brass they’ve logged. I admit that I haven’t touched the original, but it’s long been on my list of “games to play.” I imagined Brass to be a long, smart, crunchy game of cash management and timely actions. At this point, I’ve logged a few plays of both new versions of Brass and I feel comfortable enough to give some impressions and critical analysis.

This board is a beauty.

Lancashire is the retold story of the classic Brass. Played over two eras, players must lay rail, establish industries, and make each coin count. Born into families of old, rich, European money, players take loans and plot multiple turns ahead to take hold of valuable locations around the board.

Each action requires a card that matches your desired location, or at least networked adjacency to build a specific industry. One thing which makes Brass special is making the best of your hand. One game might allow you to focus closely in a few areas, building industry before other players, while other games might have you focused on establishing networks via canals and rails. Furthermore, turn order is decided by how much money players spend. Players who spend less will go first in the next round, and big spenders are forced to wait.

Of course, you also need to worry about shipping your goods overseas or off the board. This is integral to making headway since each shipment allows you to flip your tiles, which grants income and victory points. You’ll need networks connecting to these areas in order to ship, which brings up Brass‘s most endearing mechanic: canals and rails.

In order to basically do anything in Brass, you need networks. The game is all about becoming a rail baron, so it makes sense. The neat thing about Brass is how you don’t use solely your own networks, but all other players’ networks. If my opponent lays a canal in a location I have presence, now I can build in the location they’ve connected (provided I have the proper cards to do so). Players are limited to two actions a turn, so this makes pacing and timing critical in Brass. I’ve spent multiple turns laying industry tiles, biding my time until another player has no choice but to expand my direction.

Additionally, as industry tiles increase in level, their values of income and victory points sway. They also require coal and iron to construct. Players can build coal and iron supplies, and once their reservoirs are emptied by other players in need, flip them for points and income. Each mechanic in Brass builds on itself and it’s a joy to behold on the table. A few plays was all I needed to understand why Brass is so beloved by the community. 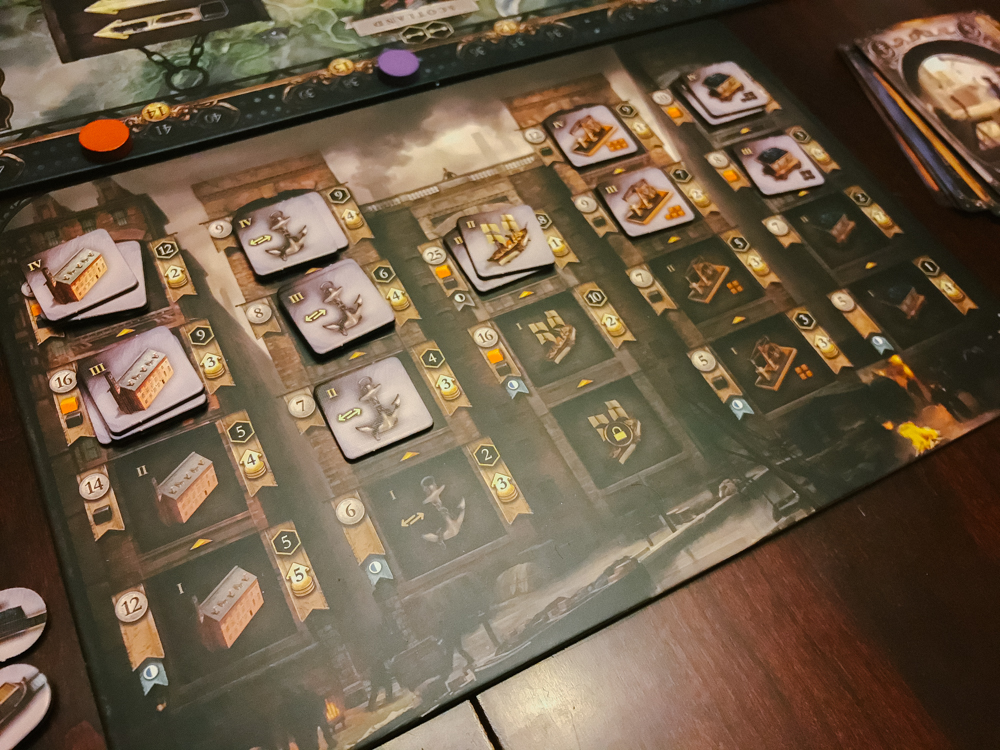 There’s much more to learn about how Brass works, but now’s not the time. Brass is good. Really good. This reprint is also great, which helps tremendously. One quick glance at the old version of Brass is enough to hurt your head. I’ve played with a number of friends who aren’t into super heavy games, and despite my warnings, didn’t care, simply because the box art and board look so enticing.

Roxley has done an incredible job of keeping the spirit of Brass, while updating the flow and feel. Cards feel wonderful in hand. Aside from the gorgeous art, I’d be remiss to not mention the excellent iron clays included with the Kickstarter. These weighty poker chips are lovely to handle and stack nicely on your character marker.

Brass: Lancashire seems to offer somewhat unlimited replay value. The game is divided in two eras, each ending once the action card deck is emptied and all cards are played. At the end of the first era, cards are shuffled, points are given out, and level 1 tiles are wiped from the board. Depending on how people play the game, some parts of the map could be sparsely populated, while in other games, the entire board could be covered. Player number accounts quite a bit for this, but play style determines everything, also. Some might focus on networks (which payout huge points for well-developed locations) while others just want to be iron and coal barons. Lancashire is yours!

While Lancashire is great, and I’ll keep it forever, it’s a bear to teach. It’s been difficult to get teaching in under 30-45 minutes. Luckily, Brass lends itself to repeated plays, so it seems a strong offering for a weekly game night for committed players. Games also last a long time, sometimes over 2 hours. I imagine if you’re playing with the same group for a long period of time, you could do it faster, but it’s difficult to get it to the table otherwise.

If you want an incredibly strong economic game that forces you to think, look no further. Lancashire is one of the best, most engaging games I’ve ever played, especially as a heavier game. There are so many avenues to explore and build on, and you should be finding new strategies every time you play. You won’t be disappointed with Brass: Lancashire. 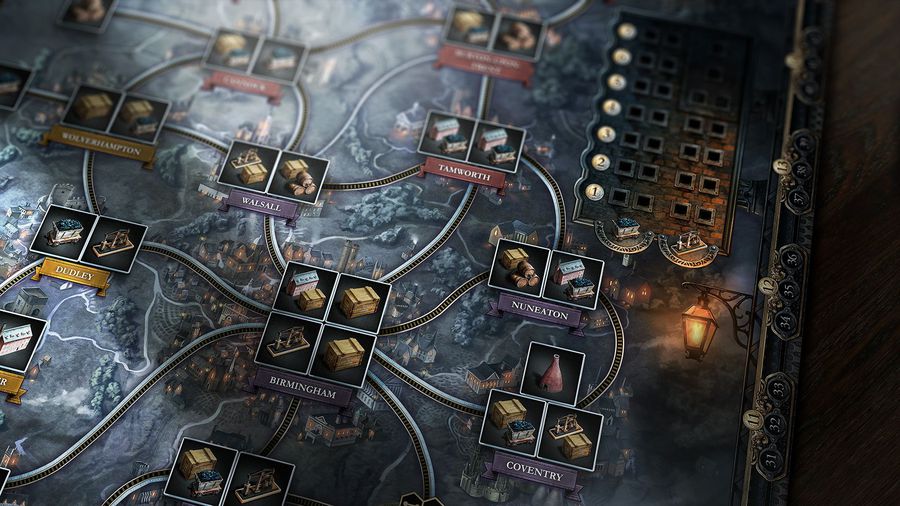 Birmingham board is a bit different and offers new strategies.

If Brass: Lancashire is the firstborn, Brass: Birmingham is the cool, new, adopted son. It’s got good looks, variable setup, and beer to boot!

Birmingham is supposedly more accessible than Lancashire, but I don’t agree with that sentiment. Birmingham has almost all features from the original, but drops the old rules of selling. Now, players need connection to beer barrels to sell. In addition, players need a network to one of five regions that have the desired industry in demand. Players get to flip their tiles, but also grab a bonus for selling to that region (which might be extra cash, a few victory points, etc).

It’s a nice change of pace, but now you have players fighting over kegs of beer. Of course, some players might just establish a ton of breweries, hoping to get them flipped for big points and cash.

Birmingham also includes a faster way to grab a wild location or industry card than the original. I’ve actually never taken this action in either game, as it seems a waste. I’d rather spend my turns making progress than preparing to make progress.

In my experience with Brass: Birmingham, I’m still spending upwards of 40 minutes teaching games. In some ways, it’s sort of easy to come into Birmingham after playing Lancashire, but the mechanics have changed enough that it’s a bigger jump to understand new strategies. Players can focus on getting their resources flipped instead of pounding out networks, but the addition of needing beer means timeliness is more critical than needing selling ports in Lancashire. If you lose your hard-earned beer because you paced yourself poorly, it’s a bummer. Luckily, selling spots include a barrel or two, so you at least have some early incentive to sell, but getting to the demand before other players can be a challenge.

Overall, Birmingham is really good, and you can’t go wrong with a tightly-wound economic game like this. 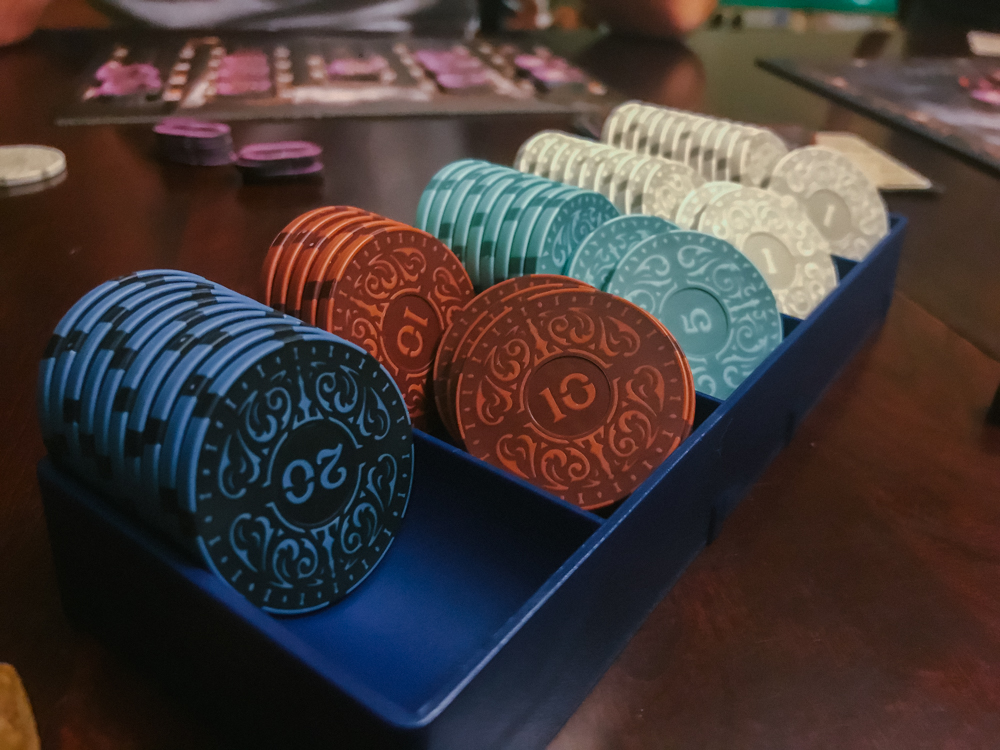 I like Birmingham, but not enough to recommend it over Lancashire. It’s just as long, and in our case, actually longer than Lancashire—not sure why this has been the case. It’s also just as beautiful as Lancashire and you can flip it over to play on day or night.

Lancashire, on the other hand, is a proven game. It’s worked for over a decade, so I’m guaranteed consistency. I like it because it’s shorter, and I don’t have to explain beer or worry about losing out on demand.

If you are deciding between one or the other, I’d pick up Lancashire. If you already own the original, it wouldn’t hurt to own Birmingham. Consider it like a strong variant of the original. Don’t get me wrong, it’s not a bad game, I just can’t justify the length when the original is already so good. I might give Birmingham another few plays before off-loading it. Lancashire adjusts playing size to player count, while Birmingham is more open-ended. I do have the suspicion Birmingham might allow for more expansion at fewer player counts, and since my games have been at a full table of players, Birmingham could shine with 2 or 3. Time will tell.

Regardless, you won’t go wrong with either game, but I lean into the original. 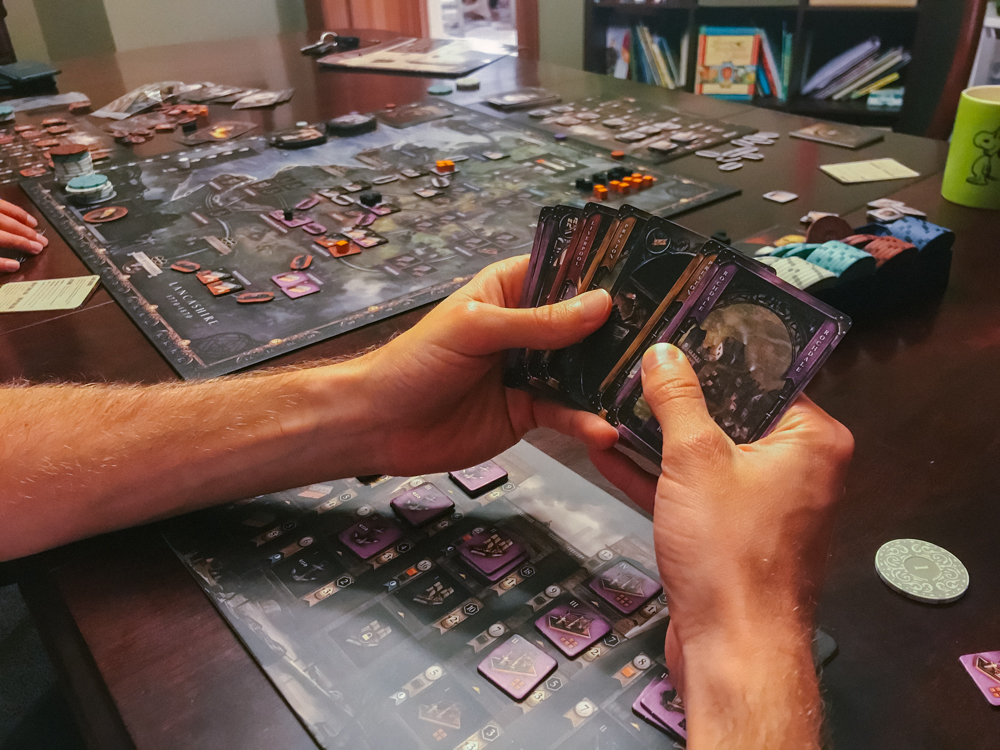