Review: The Castles of Burgundy: The Dice Game 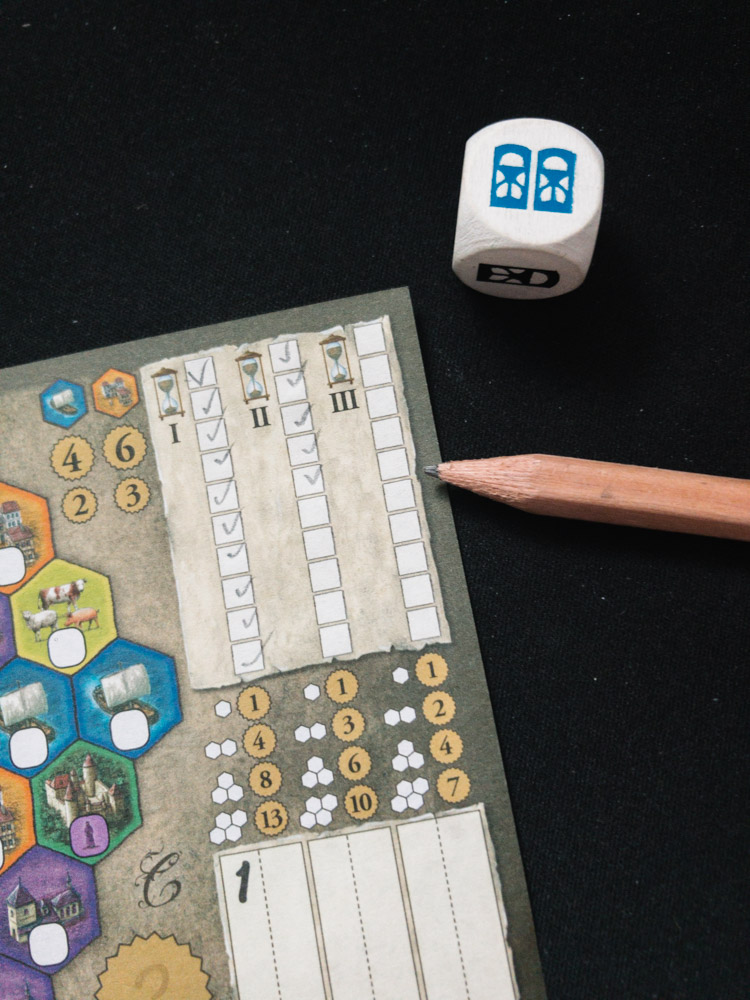 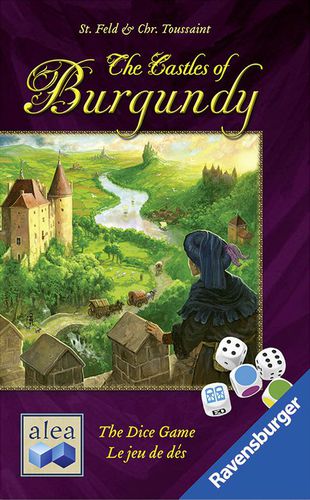 Stefan Feld is a long time board game designer who has penned many fabulous and famous titles, such as Trajan, Bora Bora, In the Year of the Dragon, Merlin, and more. Alea is an imprint of Ravensburger, focusing on more euro-based titles, including Puerto Rico, the original printing of Ra, Notre Dame, The Castles of Burgundy, and more. 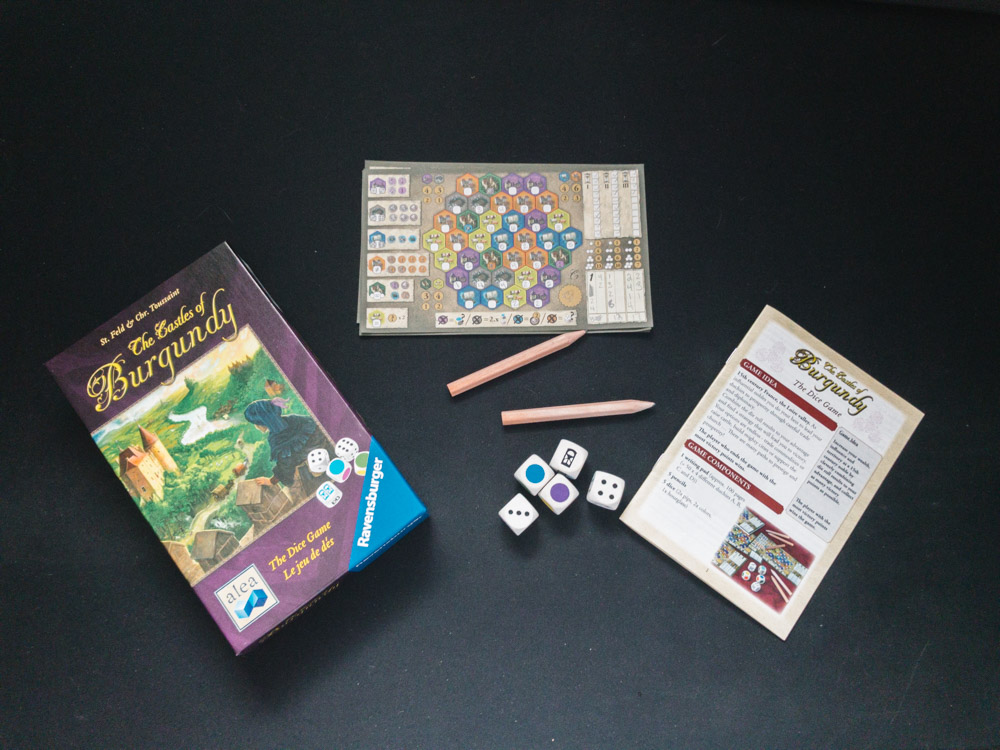 For the little bit of time I’ve spent in the board gaming hobby, no matter the hype, I’ve found I always gravitate toward two things: dice versions of established games, and everything Alea publishes.

I like the sometimes dated look of these euro titles, and I love the idea of having every game in the Alea big box series. Furthermore, what’s not to love about a new take on older games? San Juan is loads of fun, and far more desirable than Puerto Rico in my experience. Vegas Dice Game is a fun blast of random territory control. The Castles of Burgundy: The Card Game distills the original game, even though it’s a table hog.

This time tracker can result in short or long games. It’s all up to the dice.

Unfortunately, The Castles of Burgundy: The Dice Game doesn’t fire for me. In fact, it’s a blank. A miscommunicating and hard-to-read game.

Those familiar with the board game will be right at home when they pull off a sheet from the pad to write on. The game features four sheets (A-D) with varying organization of buildings and colors. Unlike the original, players must all use the same board. These generally give structure for players to pursue different strategies, but sheet A is by far the weakest and least interesting. I’d recommend playing it once to get a grasp on the game, then never choose sheet A again.

After picking a sheet, the game’s owner rolls all five dice. This player becomes the time keeper, and takes note of whether the time die rolled one or two symbols. Checking a box or two, once a column is filled, the game changes and points become more scarce, just like the board game.

Players then take a glossy-eyed look over their sheets and the remaining four dice. Two dice are simply d6s, but function together with the remaining two dice, of which are one of six colors. Players pick a number and match it with a color, then mark their sheets according to the rules of that color placement.

A few rounds might go like so: A player picks a 1 and a purple, then fills in a 1 on a monastery next to his castle. On the next turn, he chooses a 3 and a green to fill in a 3 into an animal hex. On the next turn, he picks a 2 and a purple to fill in the remaining monastery space in the purple section. This nets that player a few points for filling in a two-space area, as well as some extra points for filling it in within the first round.

The dice game is played over three rounds, and once all three columns are filled, players finish point tallies and the game ends. 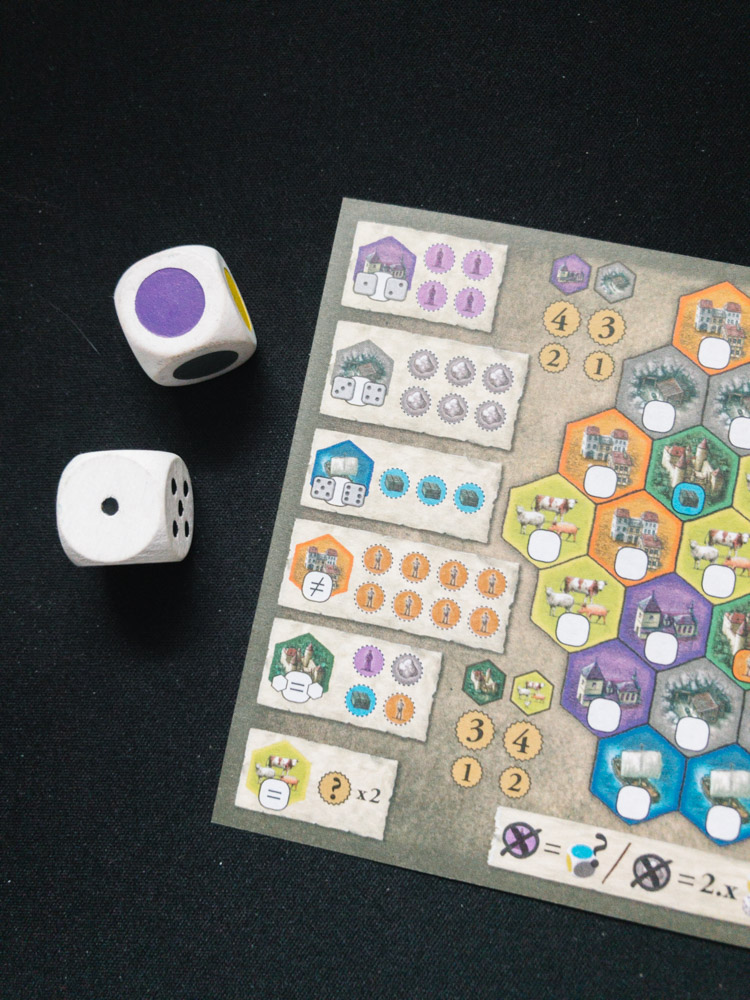 These abilities become available once you completely fill in an area. Trading allows you to gain points and silverlings once the blue time symbol is rolled.

Like the original game, players can make do with just about any die roll. If a player can’t fill in a location on his sheet, he can take a worker. This is similar to the board game, but it doesn’t work as well here. The dice game feels obviously small, as it should, and not as substantial as its older brother.

I think the issue is The Castles of Burgundy leaves players feeling like they can always expand their big, beautiful countryside more each turn. One is graced with feelings of satisfaction while taking an action to grab a hex from the main board, then spending another action to move that hex onto the estate, granting the ability to grab another hex from the board. He might even spend two silverlings (or gravel, as my lovely wife has named them) on an extra hex from the middle of the board.

In the dice game, you’ll hopefully fill in a space nearby, and maybe eventually you can one of the sheet’s special abilities. These might grant you the ability to change a die to anything you’d like, or take an extra action. Again, similar to the board game, but there’s a huge problem. The actions you take here are far smaller, and you can never take more than one ability in the same turn. You’ll constantly be excited to spend your silverling action (the most overpowered and successful way to win each game) for an extra turn, only to remember you can’t combine a color change or number change ability. It’s anti-climatic, and gambling on ways to fill in mines quickly, and usually ends up with a focus on choosing the silverling castle as your starting grounds.

I’m not extremely versed in dice games, but I’ve played a fair bit of paper and pencil games—mostly Rolling America and Qwixx. I love these games, but I realized Rolling America is such a strong game because you can use abilities in succession. Turns in this one come so quickly, and you are guaranteed lots of time to fill in your sheet. This is another gaping issue with The Castles of Burgundy: The Dice Game. One might constantly roll the dreadful blue time symbols, making a game very quick, when rolling more single symbols increases the games’ length. It feels too unsure, and because the stakes of a dice game are already so low, it’s hard to commit or spend too much time thinking about your odds of success. 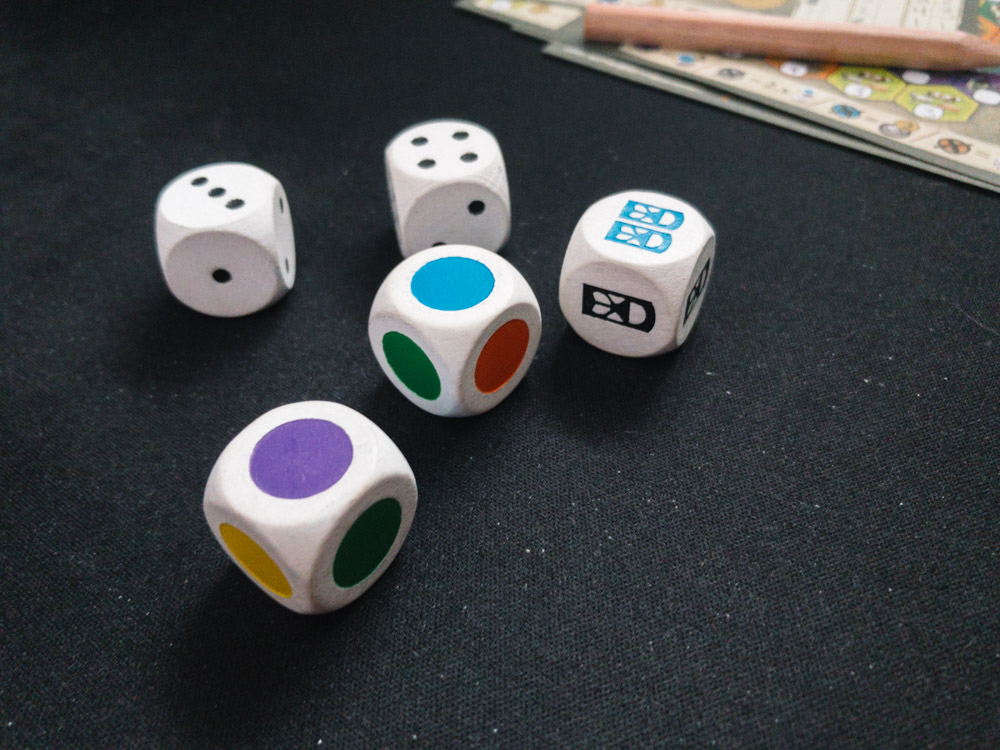 A game already struggling is made far worse by its commitment to artwork. Listen, I’m fine with the drab colors and old buildings from the board game. This doesn’t bother me. What does bother me are tiny spaces to write numbers, surrounded by dark colors from a printer. I think this game would benefit from larger spaces to write in and increasing the brightness of colors with the print job. It’s a big pain to focus, and it’s very difficult to keep track of where you’ve written things. Good games give a strong sense of your progress and where you need to go next. The dice game can’t balance this well, and it gives another strike.

It’s unfortunate, because I’ve played Castles of Burgundy with many friends. My wife and I have played it over and over again on vacation. This edition leaves a sour taste in my mouth for dice games. I’m a bit more wary of adapting the system now. It sucks, because I wanted this to be so good. Instead, it’s more bland than I can put words to. It’s severely lacking.

A review copy of The Castles of Burgundy: The Dice Game was provided by Ravensburger. 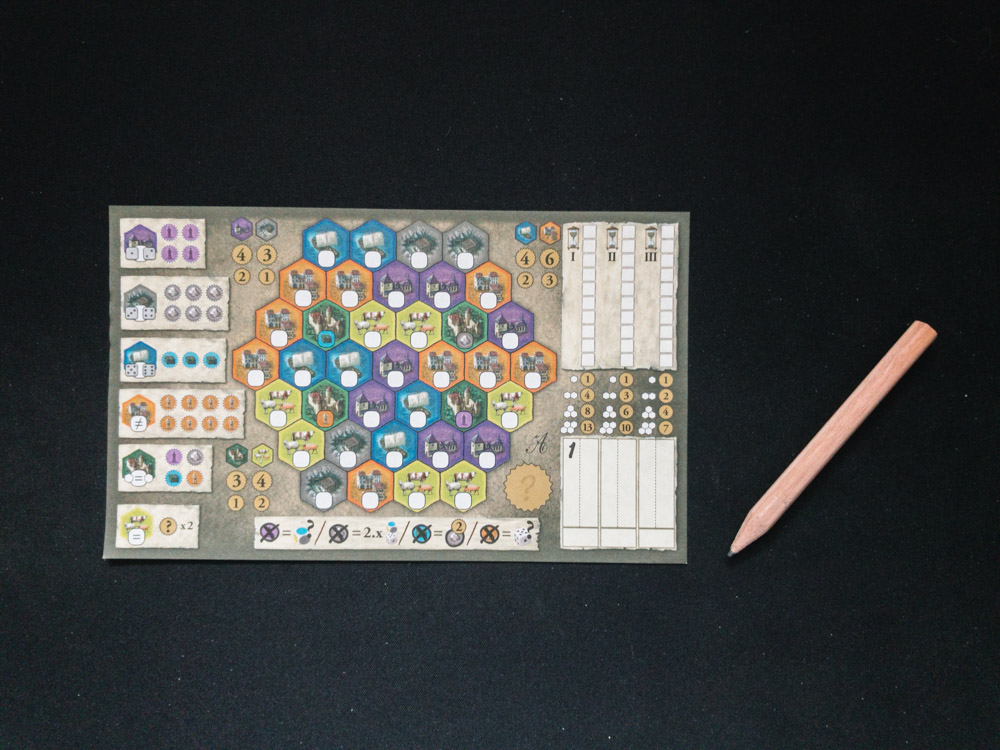 The Castles of Burgundy: The Dice Game doesn't capture enough of the joy and excitement of its predecessor's design. Even though it's portable, you are better off with the original or the card game.