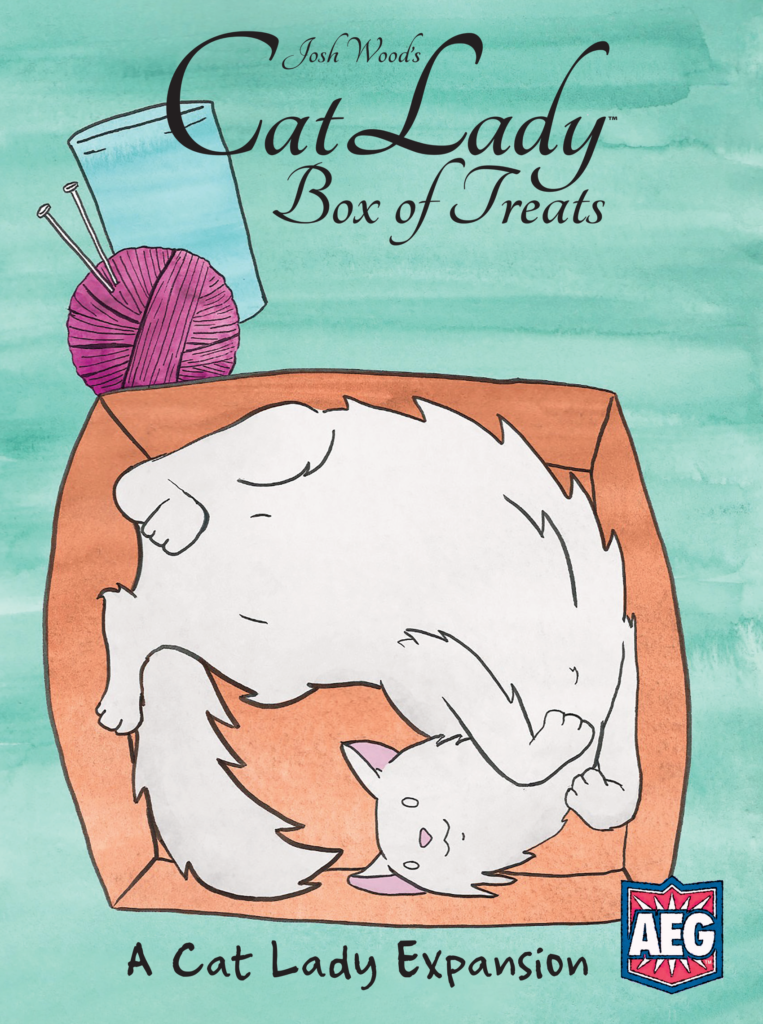 A few years ago, I was given a copy of Cat Lady to review at Gen Con, and knew nothing about it. I was immediately captivated by how accessible, clever, and charming the game is, and the theme has given it a wide appeal among my friends. Apparently we are not alone, because it did well enough to get its own expansion, Cat Lady: Box of Treats. But do we really need an expansion for this small card game? Let’s take a look! 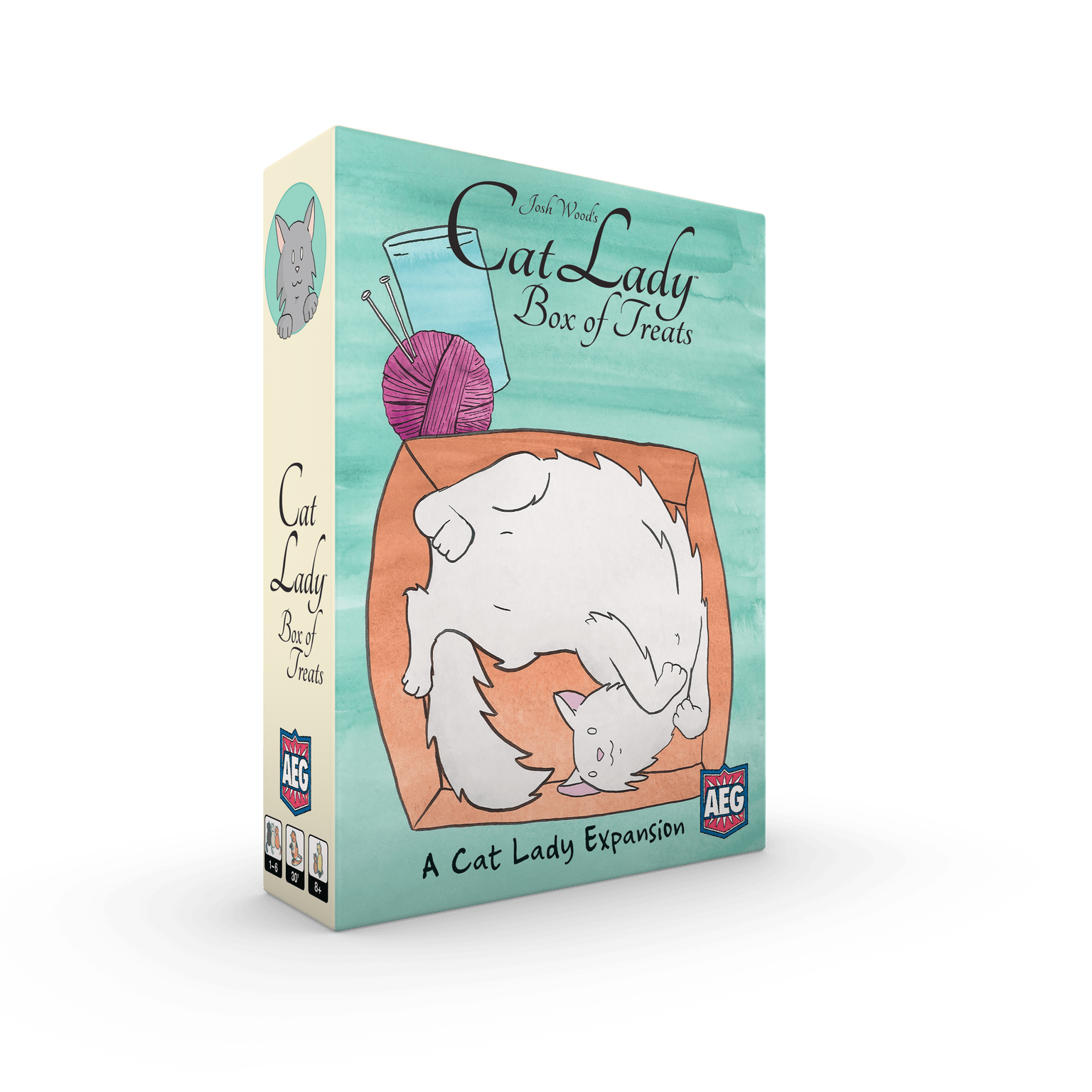 I am so torn about this release. It’s a $20 expansion for a $25 game that really didn’t need anything extra. It’s modular, which is both good and bad: you can pick what suits you, but there’s likely also a lot of stuff you own’t need. I guess it depends on how much you want each module, so let’s unpack them one by one:

New Cards for the Main Deck: This is going to be the meat of the expansion for most players. There are at least five new card types off the top of my head (Boxes, Cat Brush, Shopping Bag, Laser Pointer, Treats) and some new, really nice wooden tokens for the Treat cards.

Reading the rulebook ahead of time, it seemed like a ridiculous number of new card types and things to remember, for so few added cards to the deck. But, I was able to just explain the cards as they showed up, so it wasn’t much of an issue. However, I feel like overall the set of cards is a bit of a mixed box of treats. My wife and my 6-year-old daughter both really enjoy Cat Lady, so I’m mostly thinking of these cards in the context of explaining them to my kid.

The most interesting new card is the Treat; it gives you a new type of food. You can use just one Treat to feed ANY cat completely, but they lose all abilities and are only worth one point. This helps with situations where you don’t want to lose points for unfed cats, and/or for going for goals involving certain types of cats being fed and so on. It’s a solid addition: not too complicated, but opens up some interesting gameplay paths.

Boxes are entirely unnecessary, in my opinion. Their scoring is unnecessarily clunky (same as science cards in 7 Wonders: the square of how many you have), and they each require a certain type of cat to be in the box. My daughter loves the idea of putting cats in boxes so she immediately grabs them, but then I have to go over with her about which cats can fit in the box. And nearly every time, she has the right kind of cat or quickly gets one, rendering that part of the concept pointless. The theme of “box” cards is wonderful, but I think their actual implementation could have been much simpler.

The Laser Pointer is a variation on the Spray Bottle from the base game. A player can take any two cards from anywhere on the tableau, and then discard a third from the game. On this turn, the cat doesn’t move. It’s fairly easily explained, and it’s quite powerful that you can grab two cards from different rows/columns. I like this one.

There are several new card types that only appear at higher player counts, which is fine I suppose, but I also think this game is best with 2-3 and a stretch with 4, so it seems like unnecessary content altogether. I do like some of the new cards that are simple and straightforward, like Chicken+Tuna, or the Shopping Bag that gives Chicken+Tuna+Milk but gives everyone else 2 VP. Gray cats are just a new color of cat that don’t really need any explanation.

Overall, the new cards are cool stuff that I’ll always play with from now on, but it could have been much cleaner package.

New Stray Cat Cards: Since you only reveal three stray cats each game (four with more players), it is easy just to explain this as they appear. I also laughed at some of the humor and callbacks (“Calf” is a riff on the cat named “Cow” in the base game). This is the “more of the same” stuff that I love to see in an expansion, especially a game that doesn’t need more phases or rules or… stuff. I’ll always include these.

Cards for 5-6 players: C’mon people, play a party game or split into groups. I would never play this game with more than 4, nor have I ever been thankful for expansions that increase player count. Any time I’ve tried such thing, I’ve regretted it. This stuff always comes in expansions because unwise players demand it instead of trusting the developers. No thanks.

A Solo Mode:  In these days of quarantine and social distancing, adding a solo mode makes a lot of sense, so I can’t argue against its inclusion. But the Android/iOS app is $1.99, and doesn’t require any set up or tear-down, so I’m inclined to just do that instead. Some people other than me are going to be quite happy this is here, so your mileage may vary. A fine inclusion, just not ne that I need.

Shared Goals: Games with more than two players now have the option to add goals between adjacent players, and both players get extra VPs if the goal is achieved. As an example, if my left neighbor and I collectively feed 14 cats, we’ll get 3 VP. There are always two extra goals out, and on player’s turn they can swap eithe goal adjacent to them with one in the middle.

I found that these added very little to the experience. It was an extra unnecesary thing to track, and since you can swap the goals out, nobody really trouble achieving theirs, rendering the whole thing somewhat irrelevant. It’s possible that it adds some needed interaction with 5-6 players, but I’d rather just not do that.

It sounds like I’m fairly critical of this expansion, but the nice thing about a modular release is that you can take what you want from it. For me personally, a $10 pack of some extra cards for the game deck and stray cat deck, along with some tokens, would have been fine. But there are people out there who want to play solo, or play with 5-6 players, and so on, so it makes sense for them to toss everything in one box.

Cat Lady is already a tightly crafted design, so this entire expansion feels superfluous even without the modules I don’t want. But on the other hand, now that I have it, I will always use the new cards every time I play, to see my daughter’s joy at grabbing Box cards if nothing else. And who knows, maybe if our gamily ever grows, we’ll be sitting around the table playing Cat Lady with five or six people in a few years, and I’ll have to eat my words about upping player counts.

Thank you to AEG for providing a review copy of Cat Lady: Box of Treats.

While it's the prime example of an unnecessary expansion, there's definitely something for every Cat Lady fan in this box.