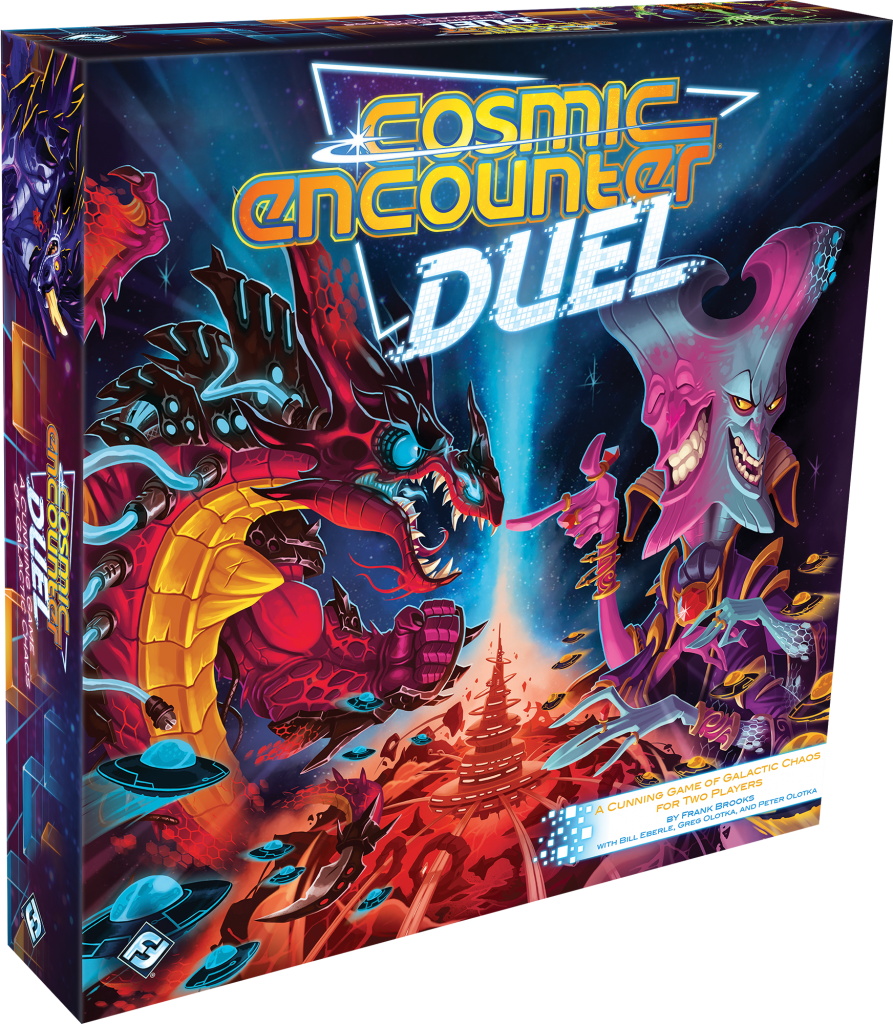 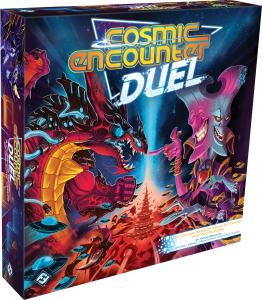 Cosmic Encounter Duel is a new game in the ever-popular world of Cosmic Encounter. In this game, 2 players vie for control of planets, in a race to land ships on 5 of them. It keeps many ideas from the original Cosmic, but modifies a number of others to make the experience accommodate 2 players.

Cosmic Encounter is my favorite game ever made. Despite it being over 40 years old, an eternity in the tabletop world, nothing since been able to match its special blend of insanity. Obviously, then, I had to try Cosmic Encounter Duel, its 2-player spinoff.

This version keeps some of the ideas from the original game, but adds a few new ones, as well. The goal remains the same: be the first to land ships on 5 planets. Players still use ships and cards to fight each other, and of course they still have wonky alien powers, but the flow of play feels a little different than before.

Unlike the original Cosmic, players do not have their own sets of planets in front of them. Instead, planets are revealed one at a time from the supply, and players fight to land ships on them. 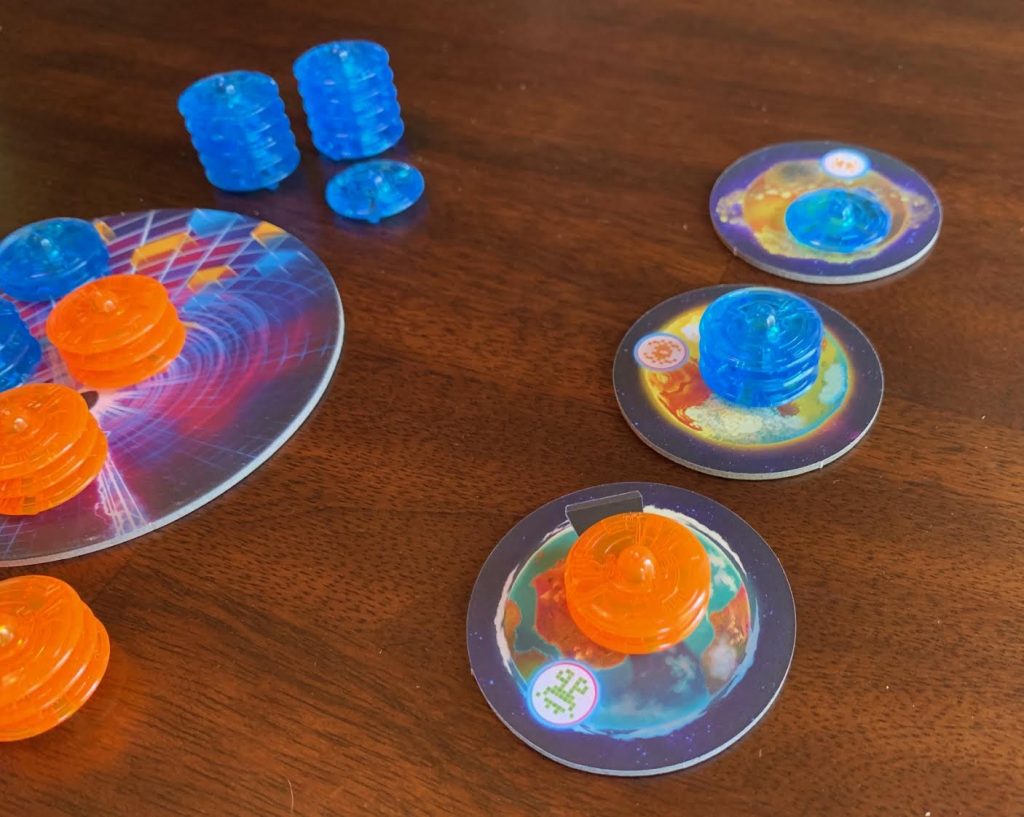 Out of necessity, the Destiny deck works a bit differently in Duel, too. Rather than a single deck of cards that determines who the active player attacks, it is now 3 decks of cards with varying effects: 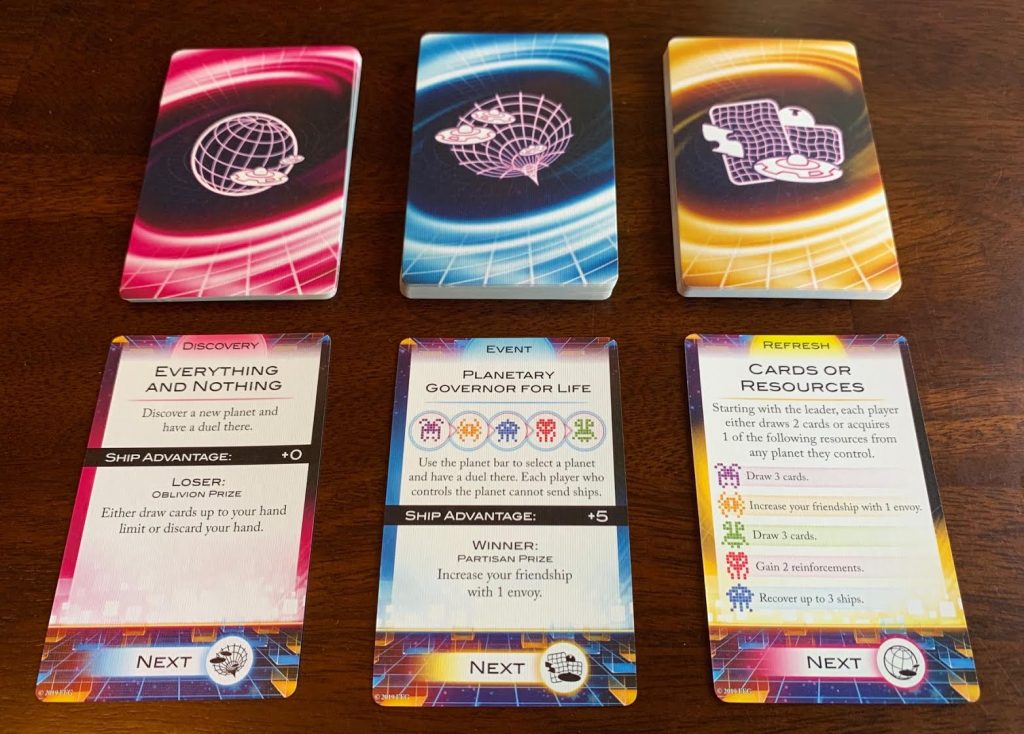 The way the Destiny cards work is actually really cool. All 3 decks share a single, common discard pile, and the bottom of each card tells the players which deck to draw from next. For instance, suppose a Refresh card was just drawn. This card might instruct players to draw an Event card next round, which in turn might tell them to draw a Discover card the following round, and so on.

When a new planet comes out, players have a duel for control of it. Using X-Wing Miniatures-type dials, they both commit a number of ships (1 to 4) to the encounter. Then, they each select a card and a tactic token. The cards will feel familiar to anyone who has played Cosmic Encounter, but it should be noted that there are no Negotiates in Duel, only Attacks, which range from a dismal -2 to a whopping 42.

The tactic tokens introduce a new mechanism to Cosmic Encounter. Each of these standees offers 2 abilities, and players orient them to select the ability they wish to use. The 3 types are Attack, Defend, and Recover. 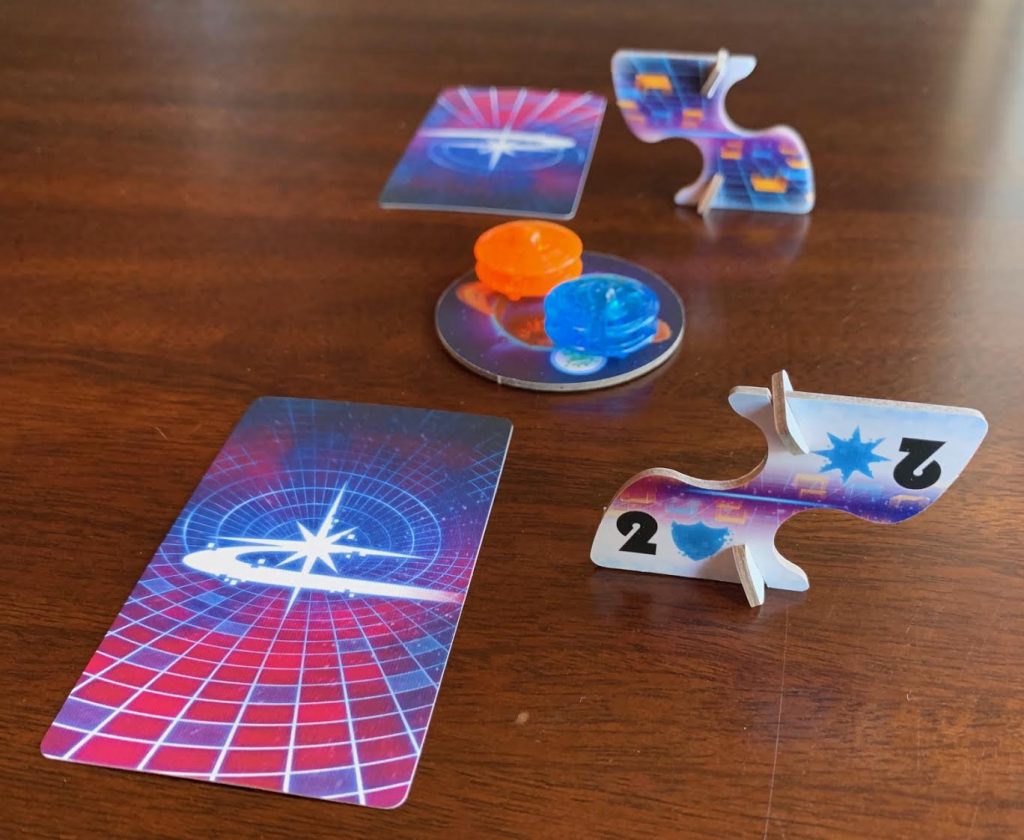 Once players have selected their cards and tactics tokens, the tokens are revealed. Attacks target the opposing ships in the encounter, but Defends block them. To give an example of how tactic resolution might work, suppose one player chose a 3-strength Attack, and the other chose a 2-strength Defend. In this case, 2 of the 3 attacks are blocked, but the defending player still loses 1 ship from the encounter for the remaining, unblocked attack point. It’s a pretty standard “Attack – Defense = Result” system. (If a player uses a Recover tactic, they get to refresh 1 or 2 of their spent tactics tokens, so they can be used again.)

At this point, if both players still have ships in the encounter, they reveal their cards to determine their base strength. If they wish, players can spend Reinforcement cards to modify either side’s value, and the player with more ships present in the encounter earns the “Ship Advantage” bonus, which is shown on the Destiny card.

To determine the winner of an encounter, players add up the values on their cards with any bonuses or modifiers they have. The player with the higher total wins. (This resolution system is a little different than classic Cosmic. Instead of being “ships + cards,” it is now “cards + modifiers.”)

Cosmic Encounter Duel does not have Flare cards, but players can befriend other alien races to earn their special abilities. These “Envoy” aliens hail from regular Cosmic Encounter, so it’s fun to see recognizable faces like the Cudgel or the Healer make in-game cameos. 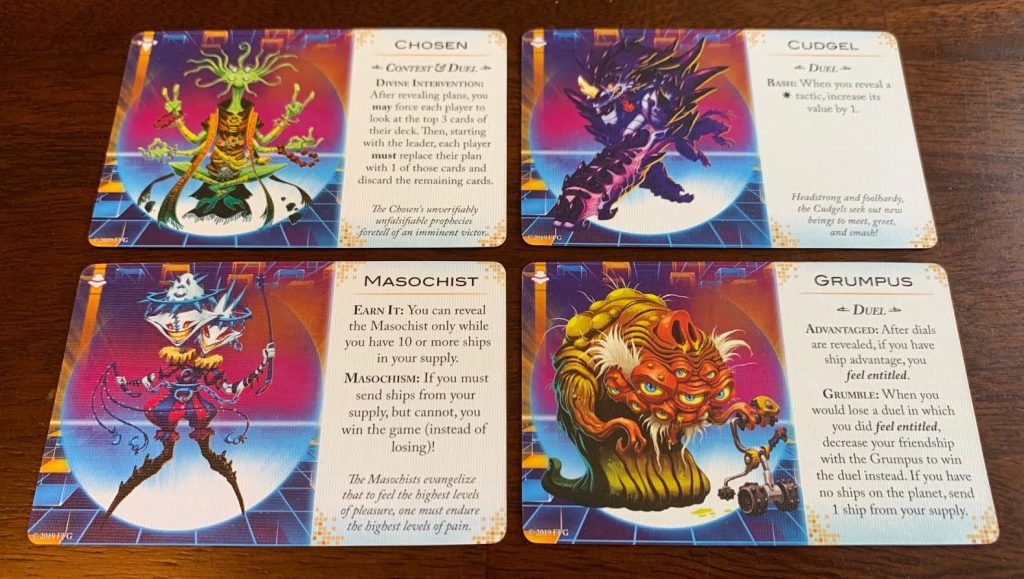 To keep this review semi-brief, I’m going to gloss over a few of the finer points of this game, but as usual, the first player to land ships on 5 planets wins!

Given that it’s based on my favorite game ever made, Cosmic Encounter Duel had big shoes to fill. Unfortunately, while this game does a good job of distilling Cosmic‘s time-honored mechanisms into a 2-player format, a lot gets lost in translation.

What makes Cosmic Encounter such a magical experience is its player-to-player interactions. It’s those moments of table-flip-inducing rage when an opponent agrees to go for a shared victory and then backstabs you, or when everyone dogpiles on the leader to keep her from getting that last point. It’s all about the metagame, the psychology, the tension, the trickery.

Cosmic Encounter Duel tries to replicate this experience, but with only 2 players at the table, it simply can’t. It’s a shame, too, because on its own merits, Duel is a fine game – it comes as close to being a 2-player Cosmic experience as any game could – but in the gargantuan shadow of its older brother, it just seems to fall flat.

Still, I think Cosmic Encounter Duel will work for a specific niche, namely folks whose gaming is primarily 2-player, like a married couple or a pair of roommates. Classic Cosmic excels with 4 to 6 players, but for people who don’t have a group of this size, Duel can provide some of the zany flavor of the original. For anyone else, though, I would always recommend the tried-and-true Cosmic Encounter over this one. It just doesn’t get better than the original.