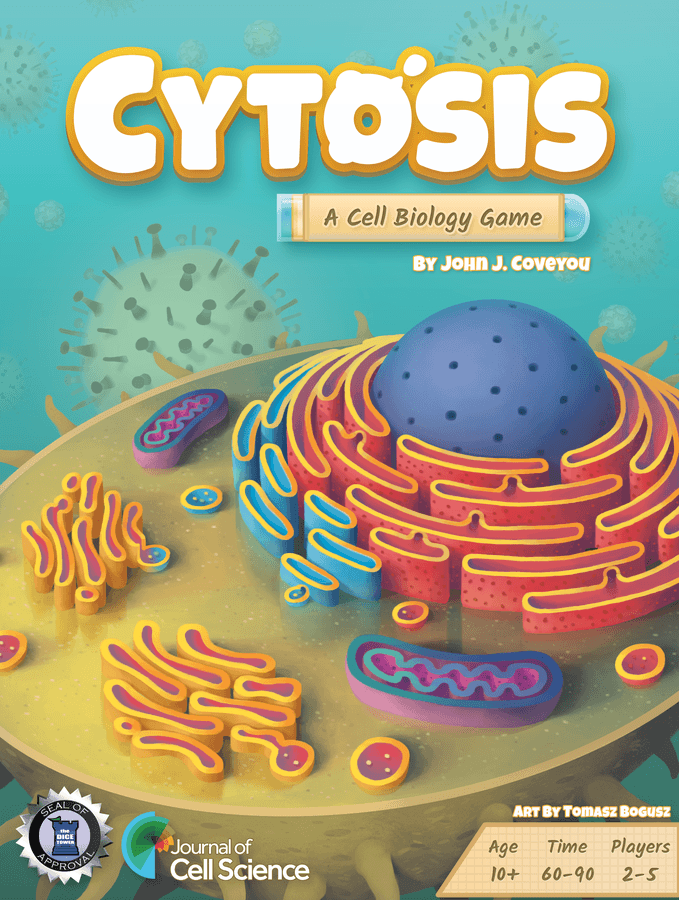 Cytosis: A Cell Biology Board Game is a worker placement game that takes place inside a human cell. Despite its microscopic setting, however, Cytosis is far from small. Rather, it is a robust euro-style game with a strong theme of real science. Ready to brush up on your biology?

For most people, myself included, the phrase “educational game” brings to mind terrible games like Mario is Missing! and Sonic’s Schoolhouse. Games like these are typically ham-handed and devoid of fun or education.

Cytosis: A Cell Biology Board Game is, thankfully, the exact opposite. It is both fun and highly educational. In this game, players take turns placing flasks (workers) on a board representing a human cell and executing actions according to their placement. 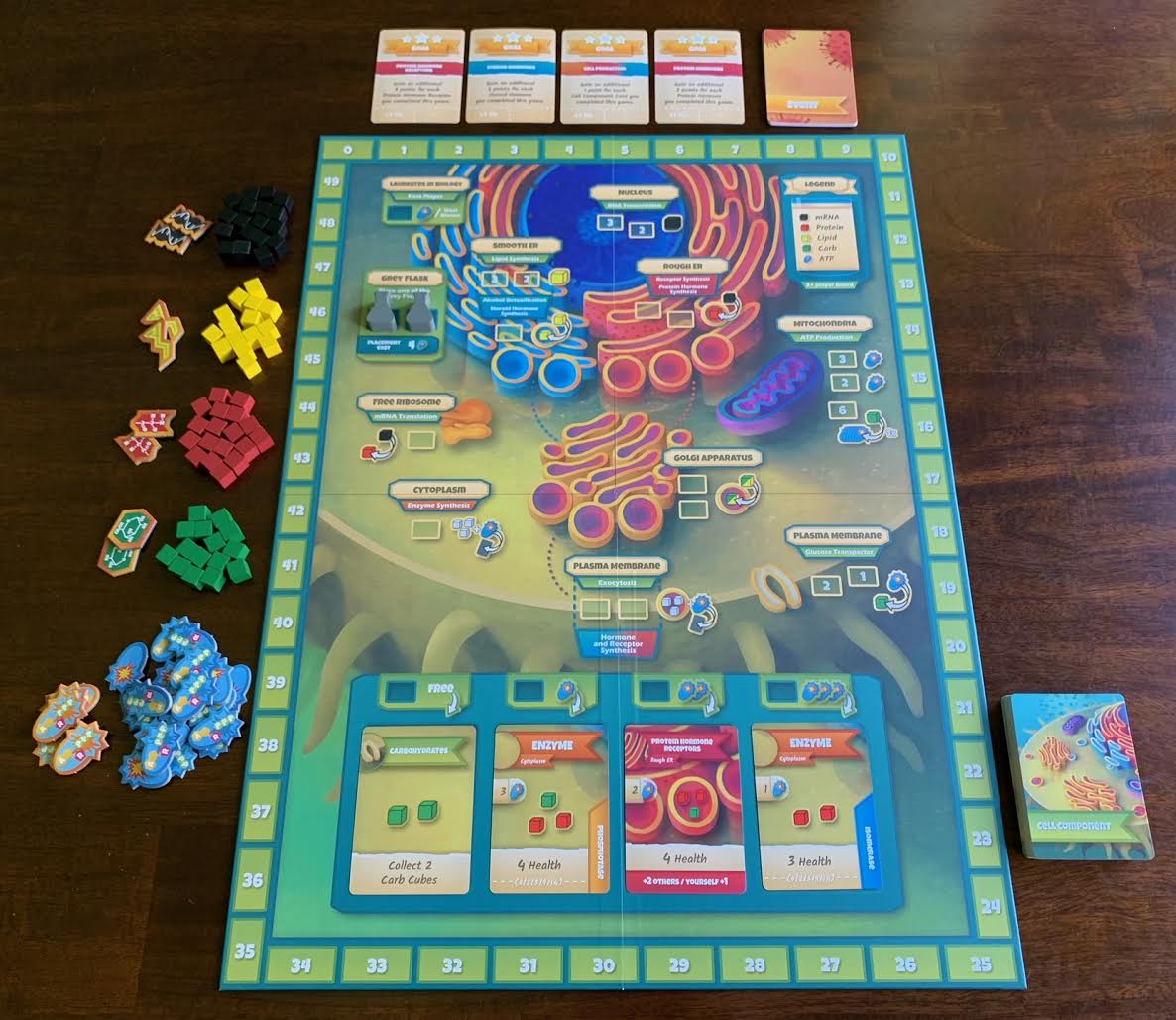 The goal of Cytosis is to earn the most points. Each player begins the game with the pieces of their color, which include flasks, transport vesicles, and goal markers. Everyone also receives a hand of “Cell Component” cards, some starting ATP (the game’s currency), and a pair of extra resources.

The round structure is quite simple: players take turns placing their flasks and taking actions, then the board refreshes and an event card comes out. The primary way for players to score points is by fulfilling Cell Component cards. These have a cost to buy, as determined by their position in the card market, as well as a requirement for completion and a reward when fulfilled. 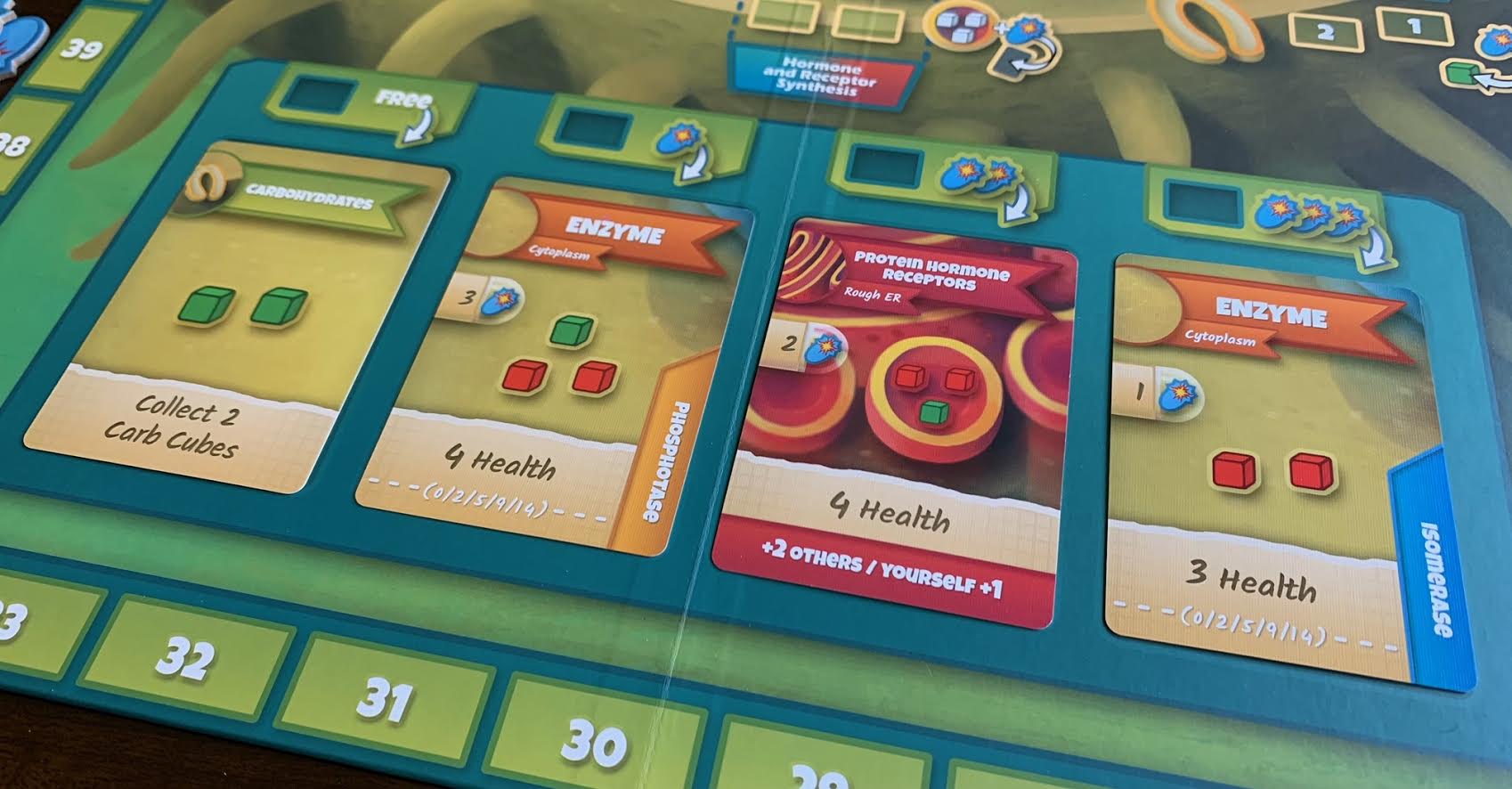 The card market, with ATP costs displayed above each card

The various action spaces around the board help to facilitate the completion of these cards. Some allow players to gain resources (e.g. Collect yellow lipid cubes, Collect ATP, etc.), while others allow them to manipulate their resources or the board-state (e.g. Convert black mRNA cubes into red protein cubes, Place lipid cubes on a transport vesicle disk, Move a vesicle, etc.).

Cell Component cards are basically mini-objectives, and they drive players’ turn-by-turn decision making. Sometimes, they must be completed in stages, reflective of the actual cellular processes they represent. For example, a transport vesicle might begin in the Rough ER region, then move to the Golgi Apparatus, then to the Plasma Membrane, all the while gaining resources as required by a card. Others, like the Alcohol Detoxification and Enzyme cards, rely on different worker spots and provide alternate scoring opportunities. 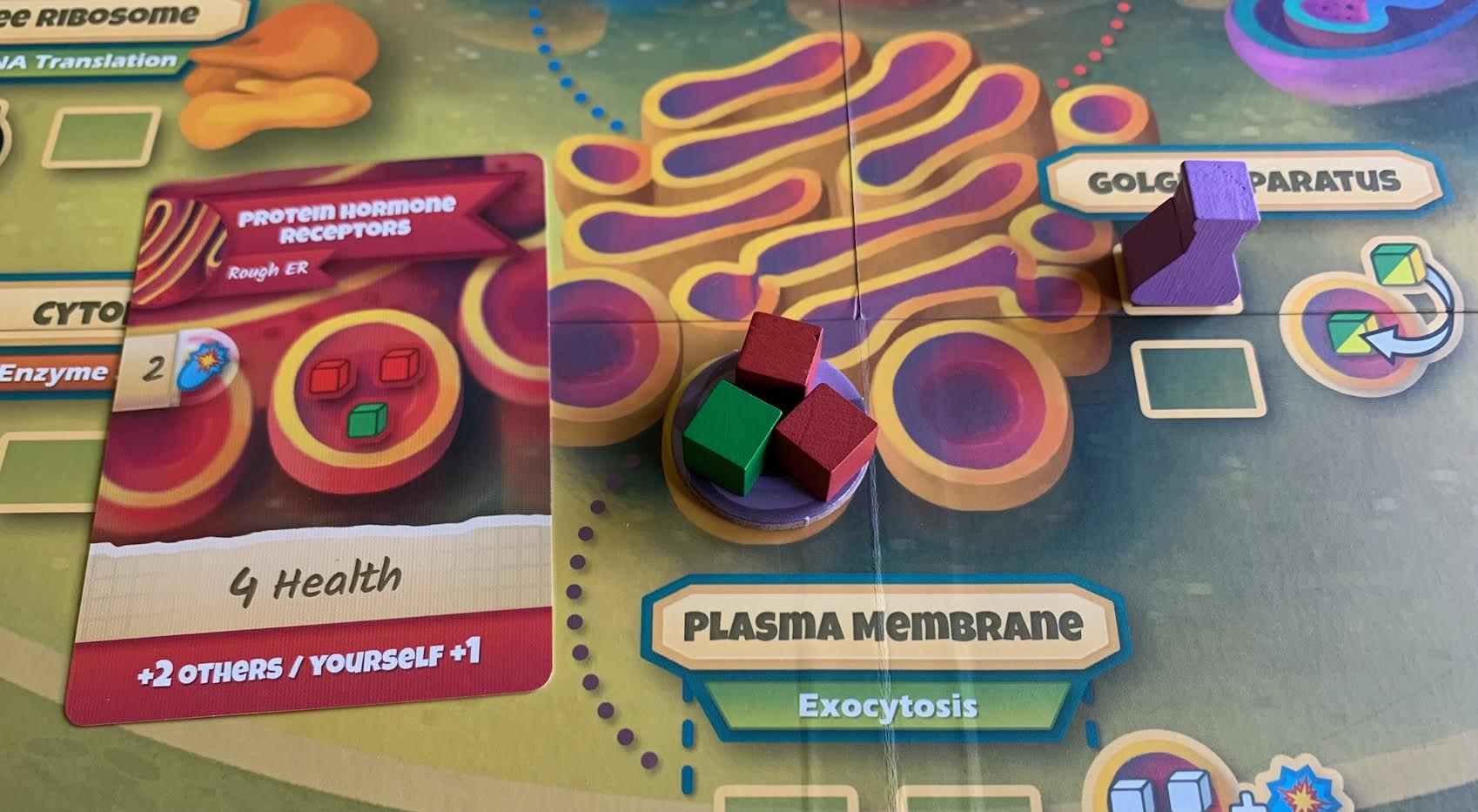 By taking the Golgi Apparatus action, the purple player has collected the last cube (green) needed to fulfill the “Protein Hormone Receptors” card

After all players have placed their flasks each round, an event card is revealed and resolved. These cards have effects like adding a free resource to a worker spot or reducing the purchase price of cards in the coming round. When the last event card is revealed, the endgame is triggered. Players carry out a final round of placing all their flasks, and then points are calculated. The player with the most points wins!

Obviously, I’m glossing over some of the finer details of Cytosis here, but hopefully the synopsis above can give a general sense of what this game is all about.

Unlike many educational games, Cytosis manages to succeed as both an instructional tool and a game experience. Not only is it fun to play, but it illuminates just how much I don’t know about biology and it makes me genuinely curious to learn more about it. To that end, the box includes a detailed supplement full of great info about the science behind the game. Reading it gives players a much deeper appreciation for the theme and the way it’s integrated into the mechanisms. 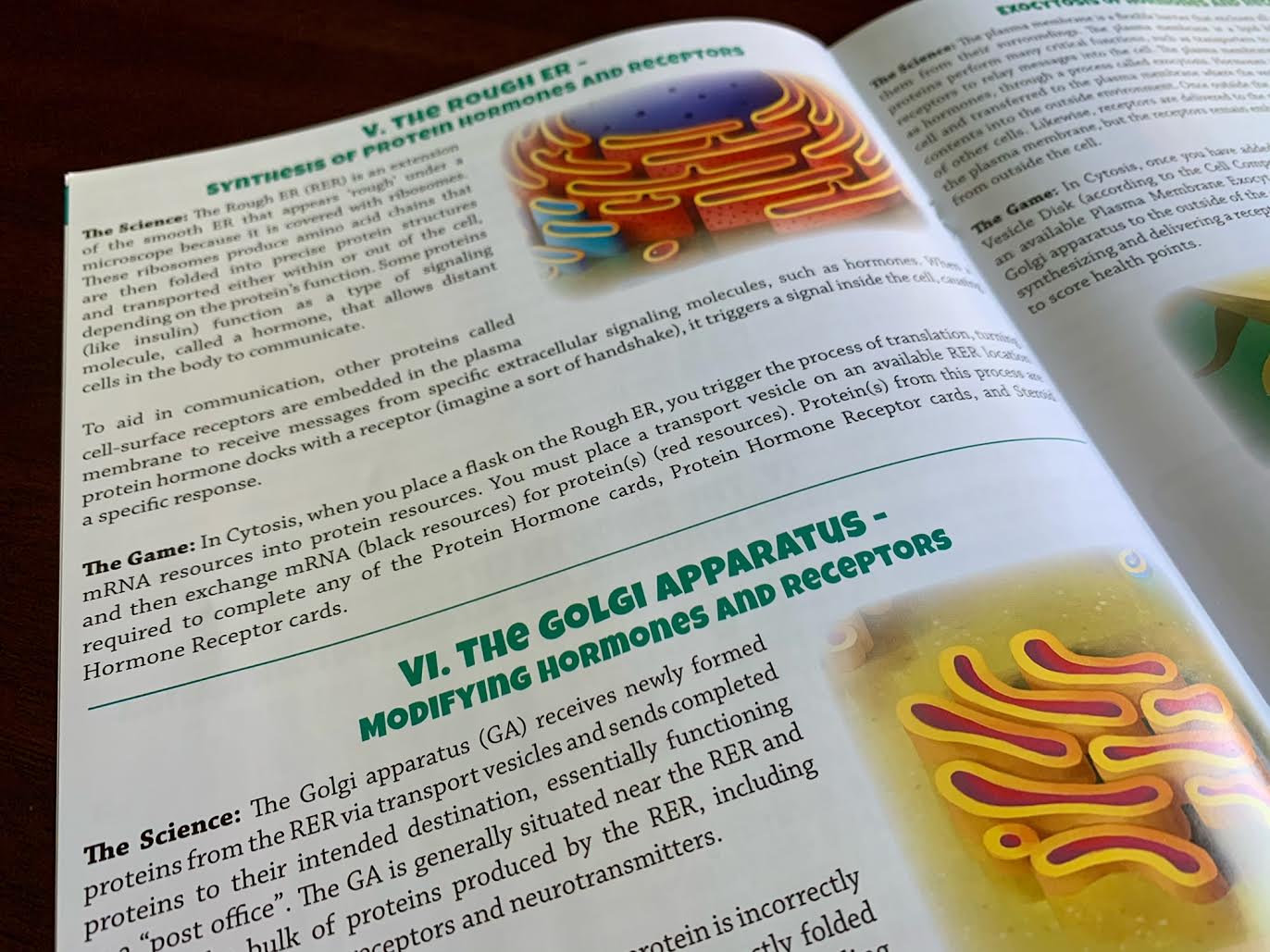 Now, my understanding of biology is basically limited to “the mitochondria is the powerhouse of the cell.” However, while I can hardly spell “mRNA,” my wife is a total science geek, and a former teacher of both biology and chemistry. She was impressed by how accurately this game depicts real biological processes. As we were playing, she was explaining to me the actual science behind the actions we were taking, and it really enhanced the experience for me. Had this game been available when she was teaching, I have no doubt that she would have incorporated it into her lesson plans. (Current science teachers, take note!) 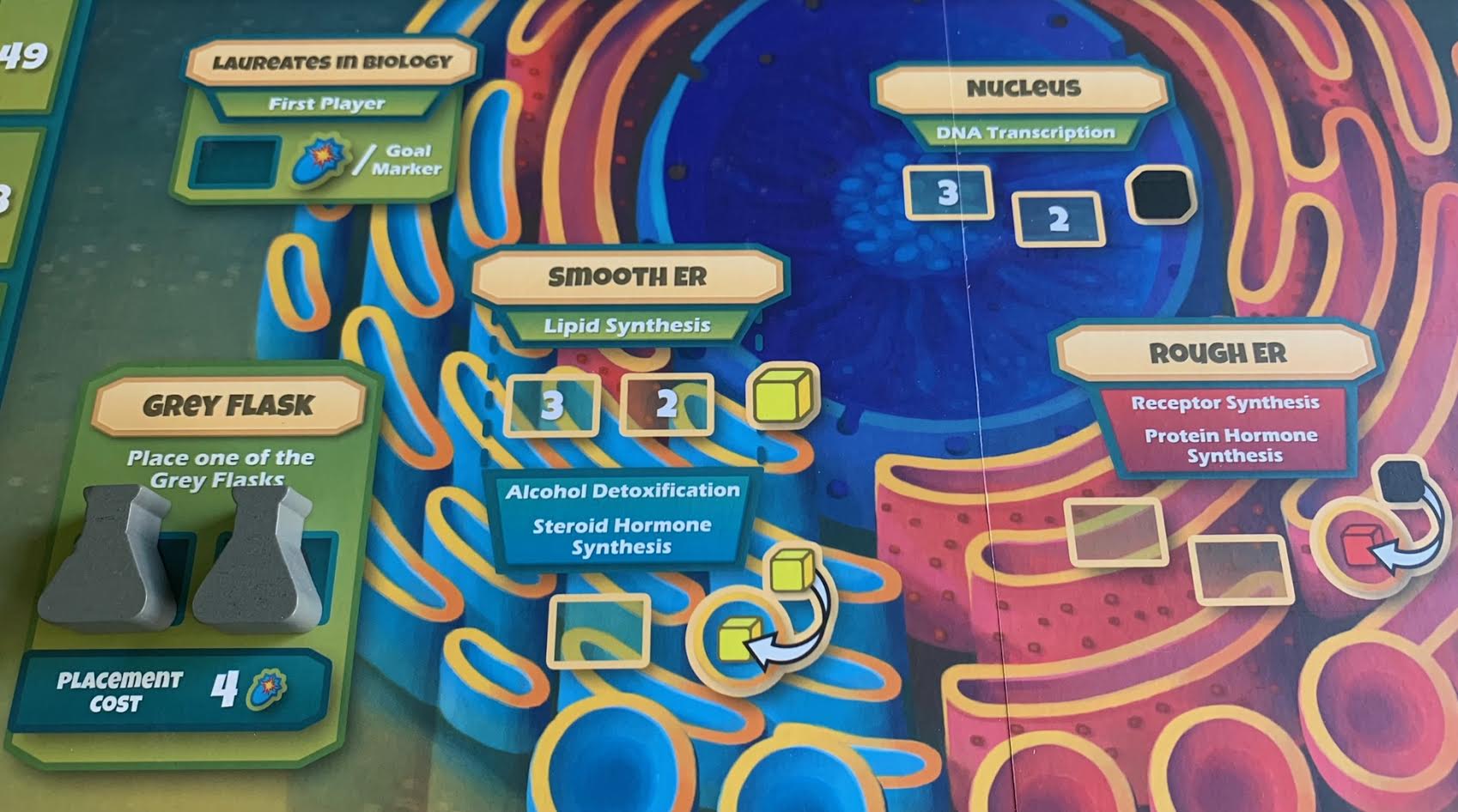 Production-wise, Cytosis looks very nice, with a vibrant board and lots of colorful bits. The rulebook is quite comprehensive, and while it can feel a bit dense at first brush, it contains a detailed, multi-turn gameplay example which really helps the reader to understand how the game works. Overall, Cytosis is a well-made product, and the supplemental science booklet is among my favorite game components ever!

Making an educational game fun and engaging is a tall order, but Cytosis really pulls it off. Science geeks will certainly want to check this game out, but even folks like me who have little background in science will still find a solid game here (and they might even learn something!).

A review copy was provided by Genius Games.

Making an educational game fun is a tall order, but Cytosis really pulls it off. This game manages to be both genuinely educational and strategically engaging.